Look Both Ways: 15 Most Dangerous Intersections in America

It can be a jungle out there for American drivers. With cheap gas fueling cars and the Great Recession in the rearview mirror, U.S. drivers traveled a record number of miles in 2015, according to the most recent report from the National Highway Traffic Safety Administration. Along with that rise in driving came a bump in crash deaths and a 20-year high for pedestrian fatalities.

The obvious lesson here would be to look both ways before you cross a major intersection in your car or on foot. But in certain cities across the country, you might want to check twice. In a collaboration between Bad Intersections and the Chicago law firm of Rubens and Kress, we got a look at the scariest intersections in every state. (Yes, this information is especially valuable to a personal injury firm.)

Using that list, we dug into the numbers and spotted the places that were positively hellish for drivers and pedestrians. In the worst cases, we found spots where you could realistically expect an accident every day. Here are the 15 most dangerous intersections in America. 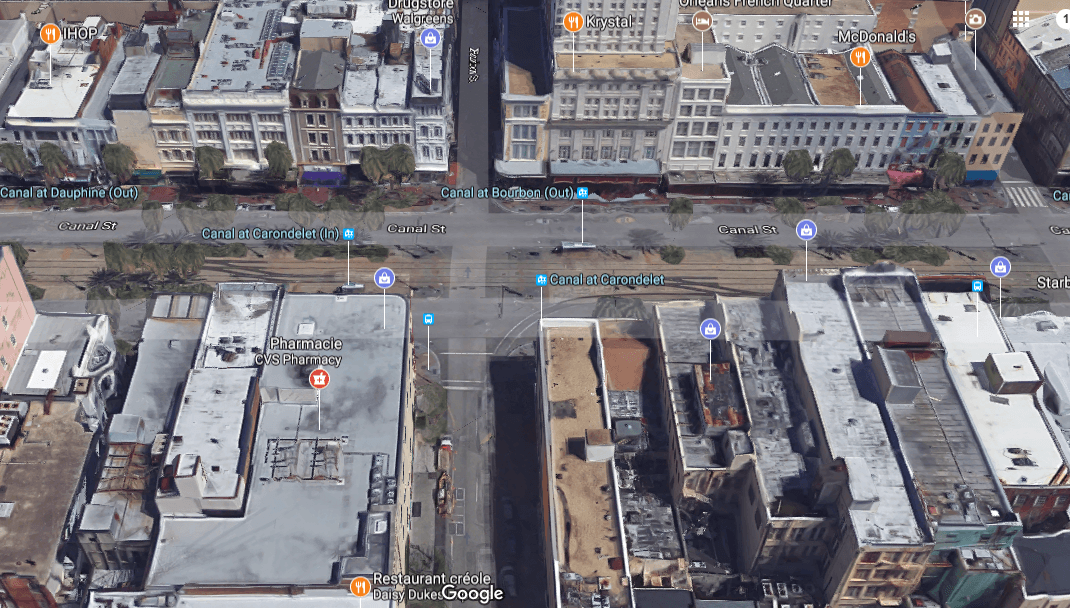 Every visitor to New Orleans will likely cross the intersection of Canal and Bourbon. This spot is tricky enough, but if you count Carondelet Street on the other side, we’re looking at eight corners in all. There are many chances for cars and pedestrians to collide, and it turns out they do all the time. According to The Times-Picayune, the intersection saw 18 pedestrian crashes over a five-year span, and two involved severe injuries. That was the highest number for any spot in town.

Next: Where Milwaukee drivers need to stay in their lane 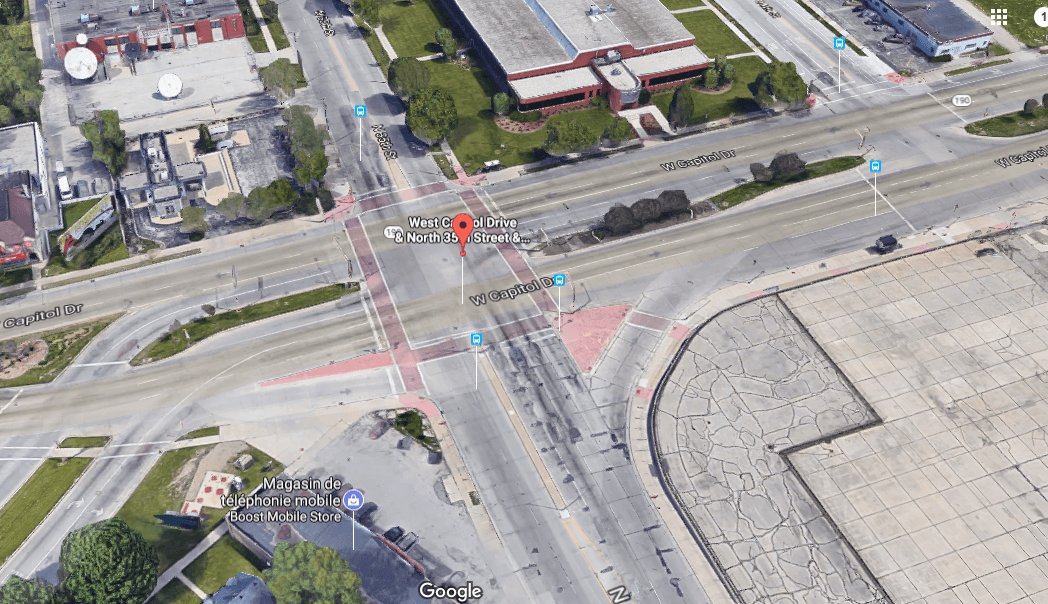 If you want to see a massive intersection, drive down Milwaukee’s Capitol Drive West until you come to 35th Street. There, you’ll find a place where nine wide lanes meet seven lanes. You can see how drivers would get confused and end up in an accident at this spot, especially when the paint used to draw the lines has faded away. Not coincidentally, drivers got into 136 accidents there from 2010 to 2015. At least 104 of the crashes resulted in injury.

Next: Danger awaits between Salt Lake City and BYU. 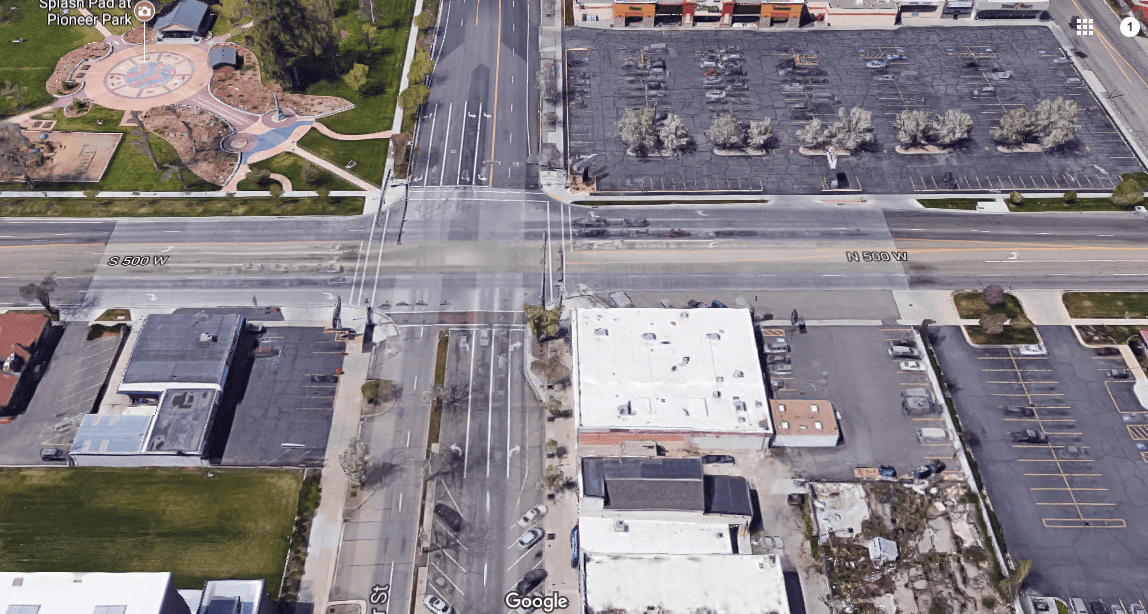 While the exact number of accidents is unknown at Center Street and Route 114 in Provo, we can say with certainty this spot is incredibly dangerous for motorists. The Utah state government’s crash-mapping service counted a whopping 111 wrecks over a three-year period at this intersection. Even compared to treacherous spots in Salt Lake City, this point on the way to BYU ranks as the scariest spot in Utah.

Next: It’s a long, dangerous day in Reseda. 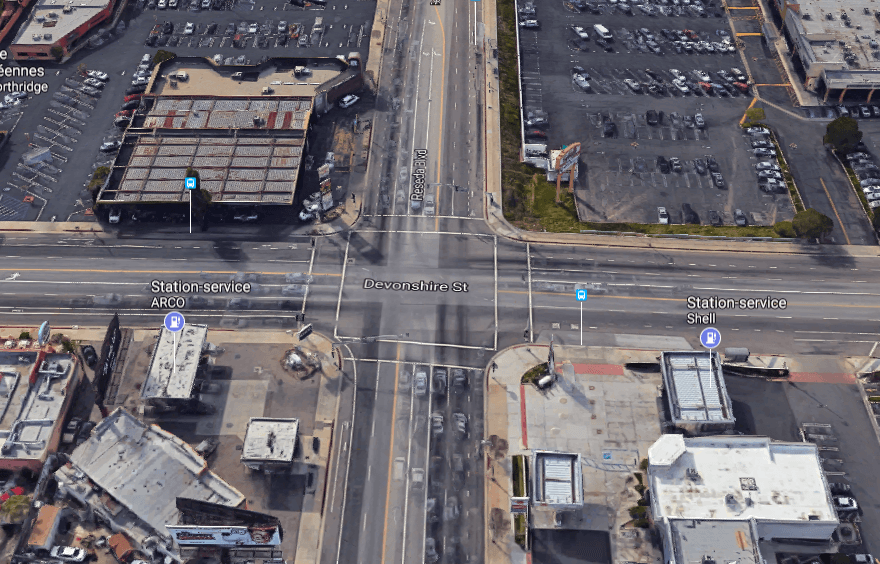 “It’s a long day living in Reseda; there’s a freeway runnin’ through the yard,” the late Tom Petty sang. Indeed, the intersection of Reseda Boulevard and Devonshire (in Northridge) is close to Route 118 and happens to be among the most dangerous intersections in the country. Over the years, it’s racked up hundreds of crashes, and law firm Estey & Bomberger counted 41 injuries from 24 accidents there in 2015 alone. If you’re headed to U.S. 101 to the south, proceed with caution.

Next: Chicago’s most frightening corner 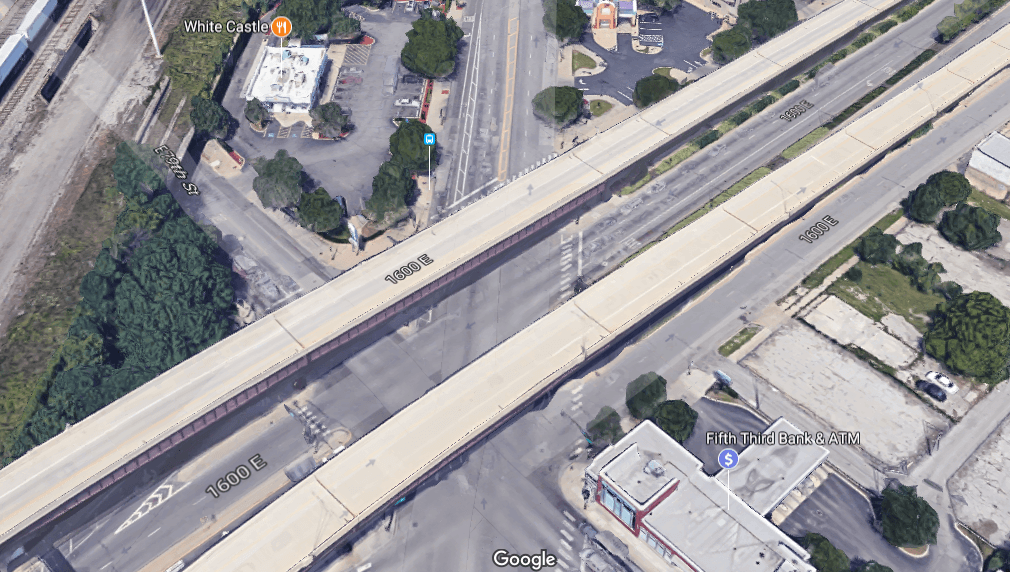 Scanning the most accident-prone spots in America, you’ll find common themes, such as large metropolitan areas, multiple lanes, and faded lines on the roads. The intersection of Stony Island Avenue and South Chicago Avenue in the Windy City features all of the above. According to a look at crash stats by The Chicago Sun-Times, 63 accidents occurred at this location in a single year. In short, pedestrians shouldn’t want any part of this crossing. 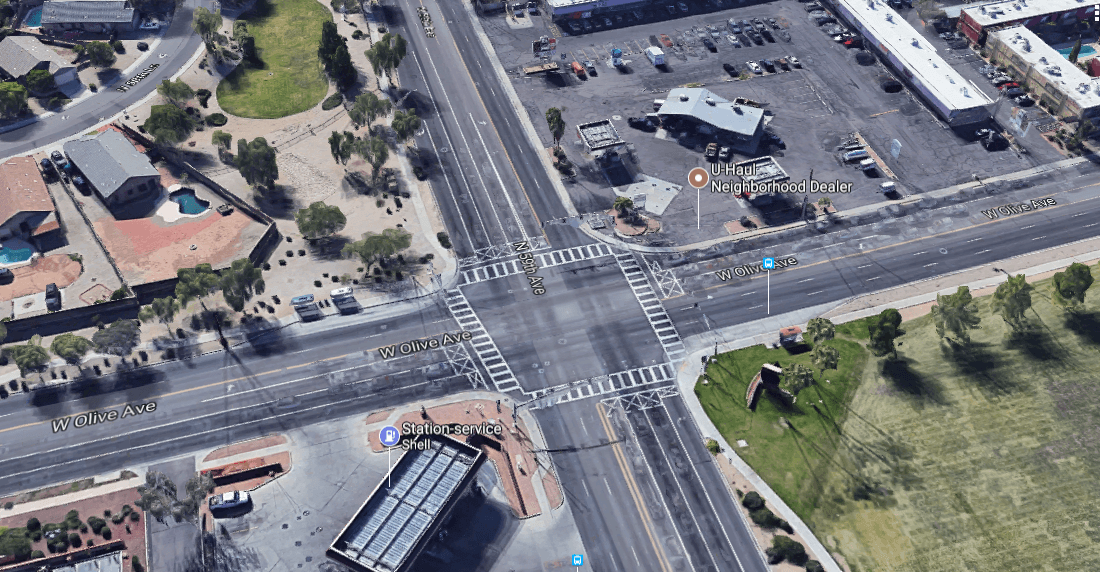 Where Olive Avenue meets 59th in Glendale, drivers encounter multiple lanes, places to shop and eat, and gas stations on either side of the intersection. That variety of entrances and exits makes this location among the most dangerous in recent years. According to AZ Central, law enforcement reported 68 crashes leading to 30 injuries there in 2013 alone. No other intersection in Arizona could match that total.

Next: What Rhode Island lacks in size, it makes up for in crash volume. 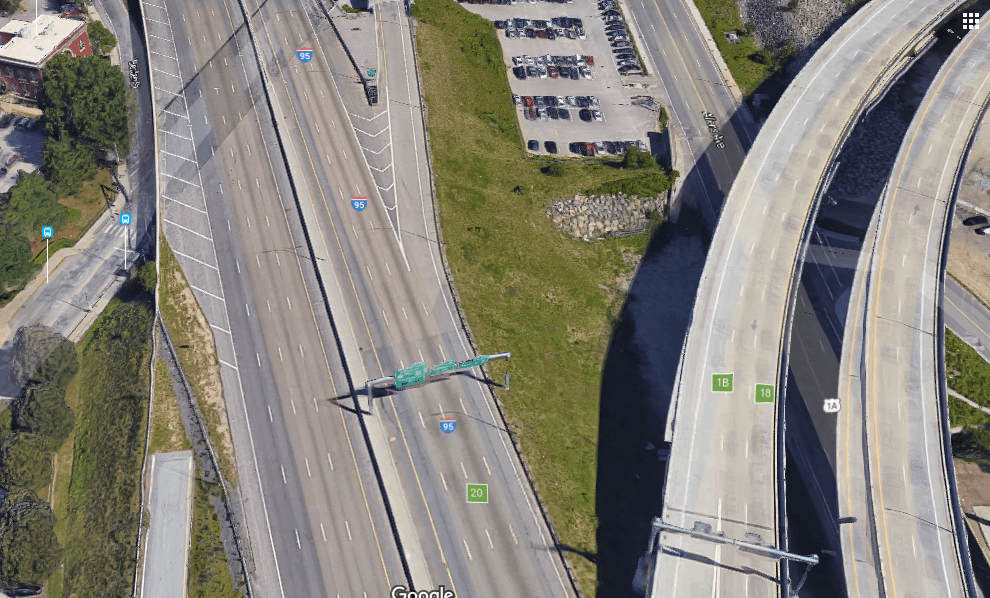 When drivers on I-95 reach exit 20 at Point Street in Providence, they encounter an unusual mess of lanes, off-ramps, and crisscrossing arteries. For a long time, this spot was considered the most dangerous of all New England intersections, but in recent years improvements led to reduced accidents. Nonetheless, the location’s 217 crashes over a three-year period involved 90 injuries. These numbers kept it among the scariest in the country.

Next: Driving north of Philly can be real scary. 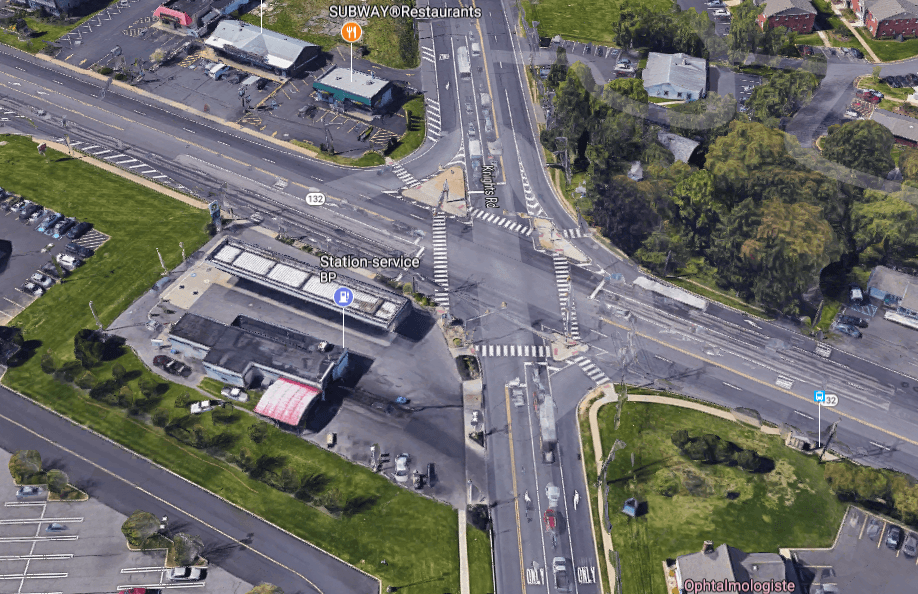 As recently as 2014, the intersection of Knights and Street roads outside Philadelphia held the title of deadliest crossing in America, according to Time’s analysis of National Highway Traffic Safety Administration data. Years later, it remains among the nation’s treacherous due to bad signage, unfriendliness to pedestrians, and aggressive drivers. In the past decade, 144 accidents occurred here (with 170 injuries) over a two-year period.

Next: Never mess with this Texas intersection. 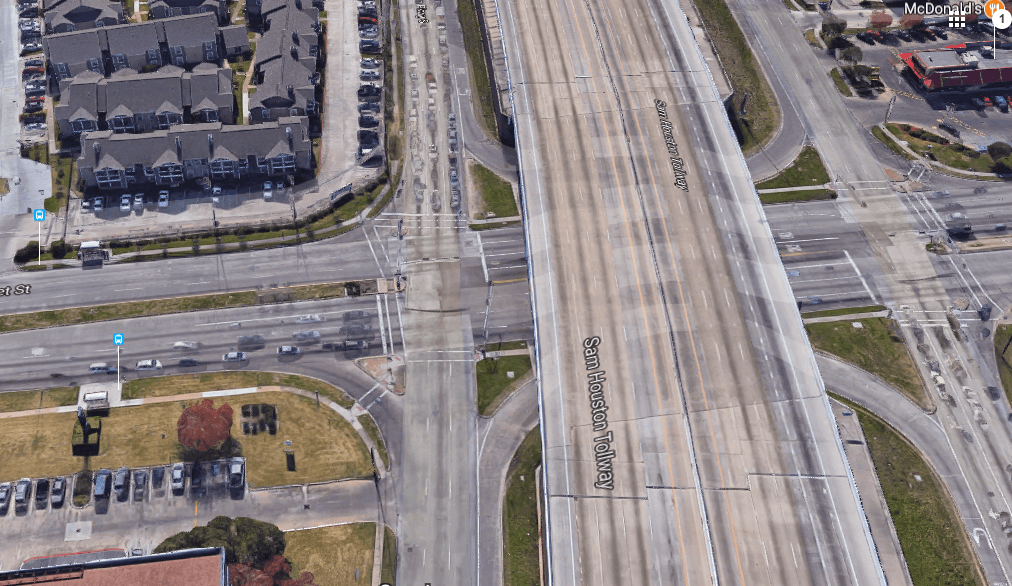 The rapidly growing Houston population faces many challenges, including how to navigate certain intersections. One very scary spot sits at Bissonnet Street and Sam Houston Parkway. Here, drivers encounter overpasses, off-ramps, business entrances, and multiple lanes on each roads. Over 300 crashes occurred here over the course of four years, with 252 injuries recorded from the wrecks. It’s the most dangerous spot for drivers in Texas, the state with the most crash deaths in 2015.

Next: One Albuquerque intersection actually tops Houston’s most dangerous spot. 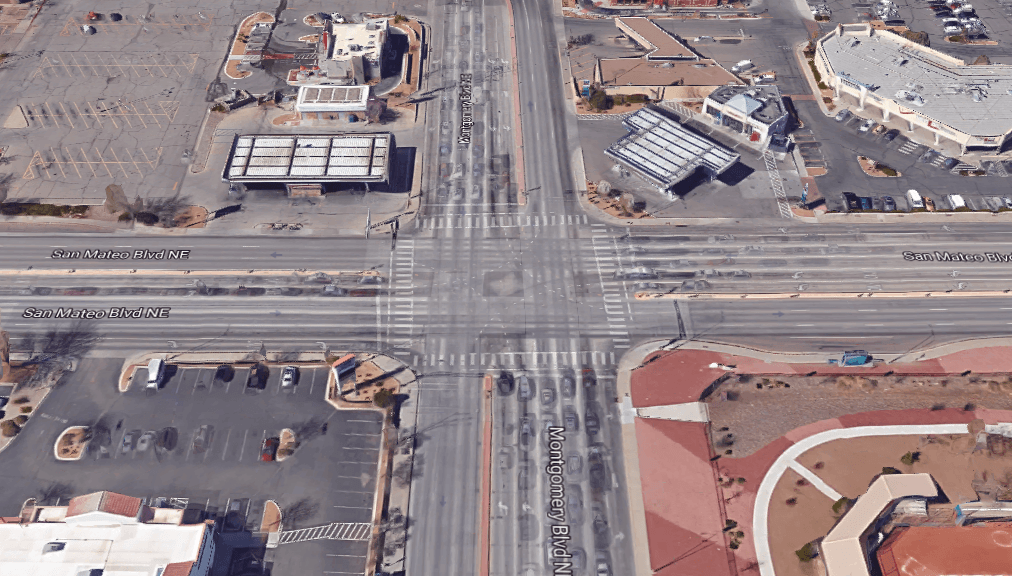 We count at least seven lanes per road at the widest point at this intersection, where 260 crashes occurred over three years in Albuquerque, according to the University of New Mexico. Of that number, 25% resulted in injury or death. As in other frightening spots across the country, the intersection of Montgomery and San Mateo involves cars coming from more directions than drivers can count. What follows should surprise no one.

Next: These mean streets of Columbus averaged 89 car accidents per year. 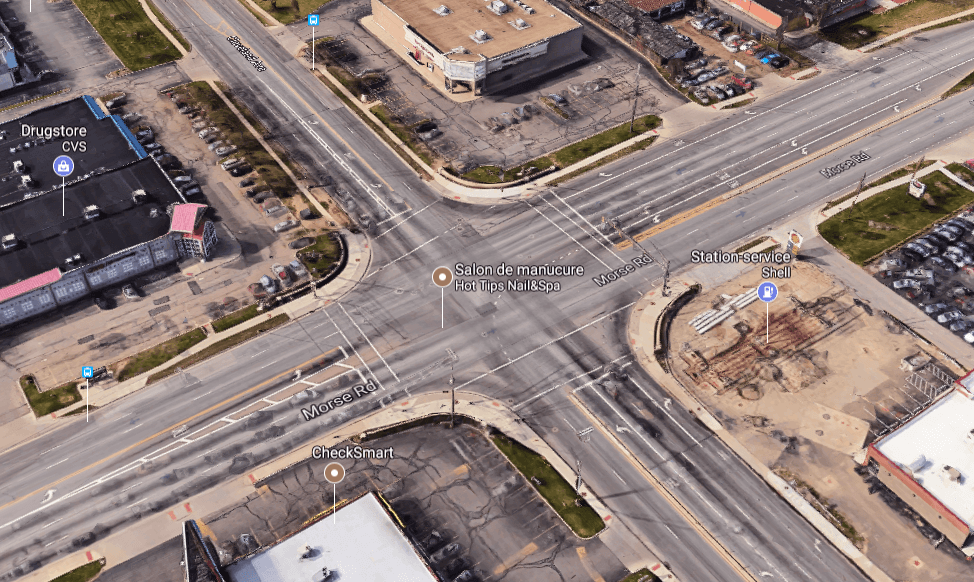 There is stiff competition for the most dangerous spot in Columbus. The Ohio Department of Transportation considered Broad Street at James Road to be the most treacherous, but the 268 crashes recorded at Cleveland Avenue and Morse Road over three years ranked it higher for us. Accidents at this location, which has the highest traffic level in the area, claimed the lives of two and left three others seriously injured from 2013 to 2015. 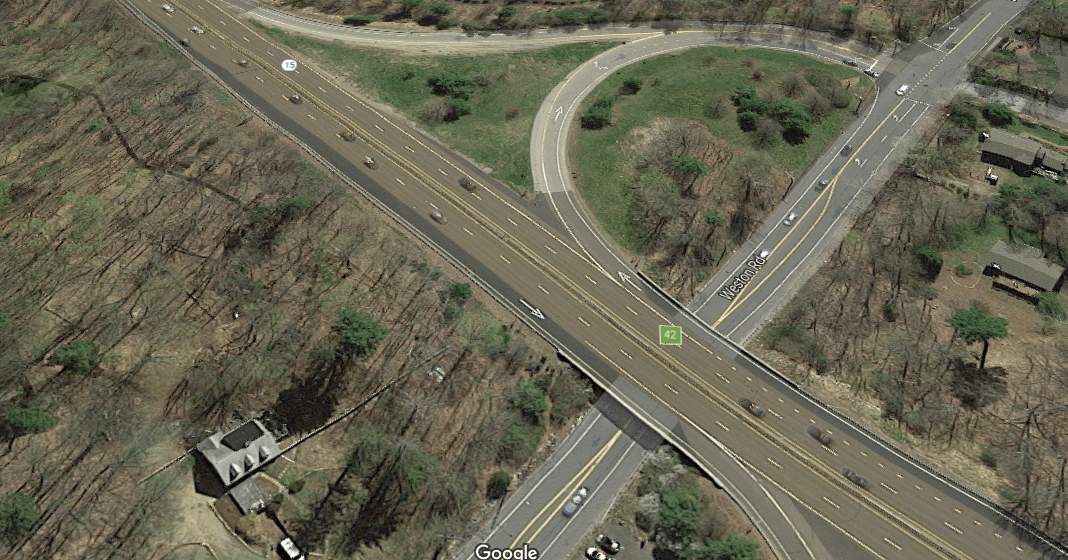 Following improvements to Rhode Island’s scariest intersection, the title of New England’s worst fell to a stretch of Merritt Parkway in New Haven, Connecticut. According to the state’s Department of Transportation, 562 crashes occurred there over a three-year span. In those wrecks, officials counted 125 injuries to drivers, passengers, and pedestrians. The state launched a study to determine what made this area so dangerous.

Next: This intersection has a stunning amount of crashes. 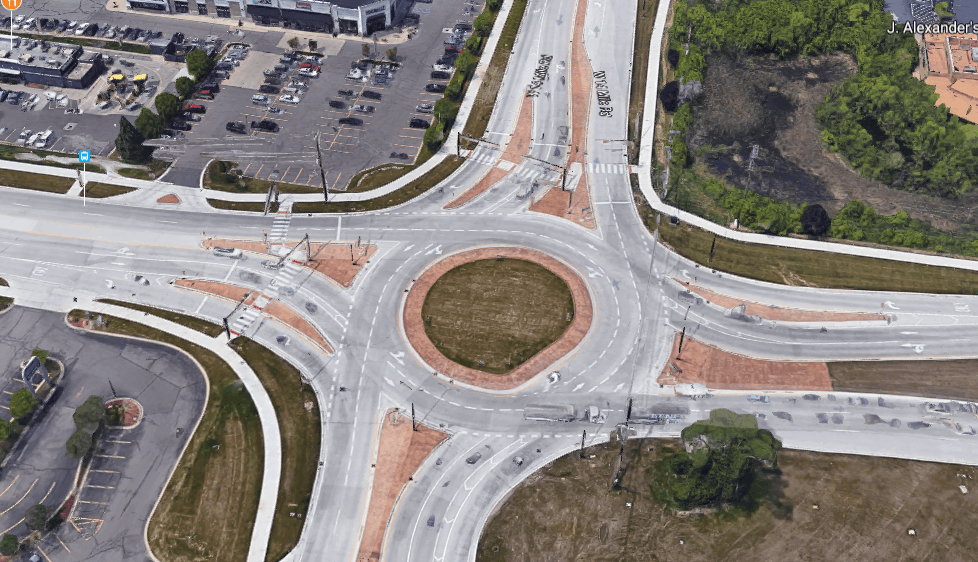 There’s no way the Motor City could be left off this list. The location of Orchard Lake Road and 14 Mile just north of Detroit had a stunning 163 crashes in 2016, with 27 of them resulting in injury. These numbers, supplied to Michigan Auto Law by state police officials, put this spot in a class of its own in the metropolitan area. At a glance, we noticed wide lanes, multi-lane avenues, and inadequate signage as possible reasons for the danger here.

Next: The Big Apple has a big problem in DUMBO. 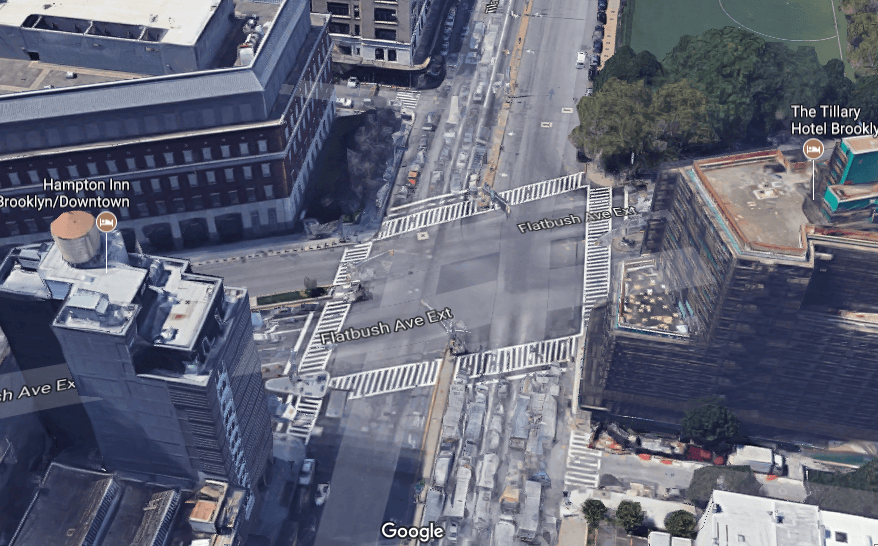 Anyone who drives in New York knows the city can’t handle the traffic. Nonetheless, motorists heading for area bridges and tunnels leave each day hoping for different results. Often, they end up dealing with injury and damaged vehicles. Of the many bad spots in the boroughs, the intersection of Tillary and Flatbush in DUMBO ranked as the worst. According to Aleksey Bilogur’s study of collision data, this location averaged 180 incidents per year. In the lower 48, you won’t find a scarier place.

Next: This part of Honolulu will kill your tropical island mood. 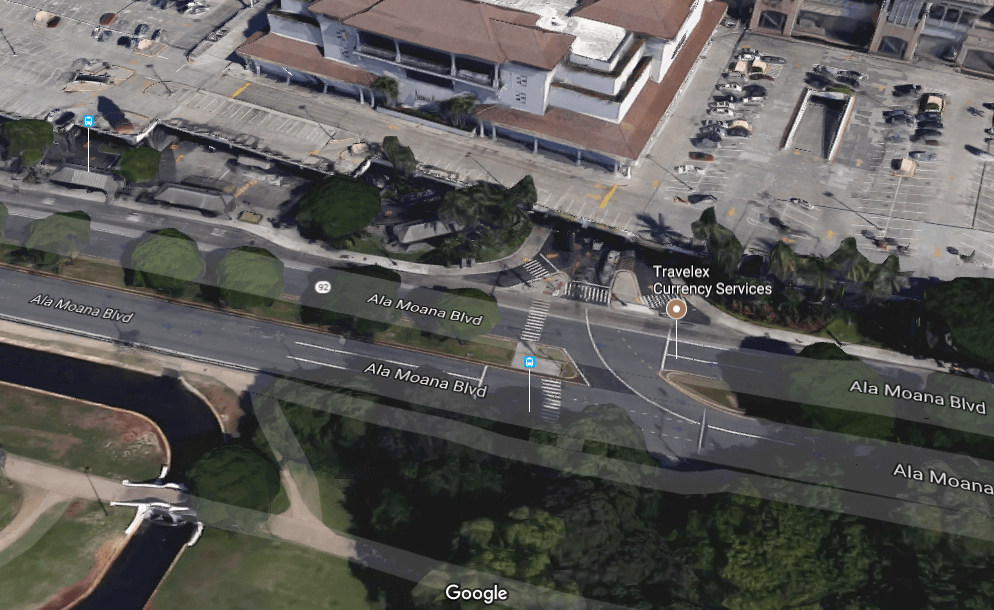 If you want to find America’s most dangerous intersection, look no further than the 1450 block of Ala Moana Boulevard in Honolulu. Featuring a massive web of parking lots, entrances, and exits, this location presents challenges to every driver. Too often, they fail to get through unscathed. The intersection posted 312 accidents in a single year (2015), making Honolulu’s gauntlet the scariest place for motorists and pedestrians in the country.