Love Disney but Can’t Afford It? Try These Cheaper (and Maybe Closer) Amusement Parks Instead

Ask any Walt Disney World fan for the best part about the iconic amusement park, and many will say it’s Magic Kingdom’s Splash Mountain or “It’s a Small World” rides. For some people, it’s the chance to meet their favorite mouse. Surely no one will tell you their favorite part is the hefty price tag. Visiting the Happiest Place on Earth may very well put a strain on your wallet. If you’re a family of four, a Disney World four-night vacation will set you back $6,360.

Tallying up the price of a Disney vacation can be a dizzying experience, when you factor in ticket prices for the entire family, plus the cost of meals, lodging, transportation, parking, souvenirs, and so on.

If you enjoy large amusement parks with lots of roller coasters, Six Flags Great Adventure, located in Jackson, New Jersey, may be worth a trip. Tickets run $47 if purchased in advance online. The 350-acre theme park features 50 rides, 14 of which are coasters. In fact, the park boasts the world’s tallest roller coaster, Kingda Ka. The steel accelerator coaster reaches a height of 456 feet.

Next: Enjoy more than 70 rides and some free chocolate as well.

Like Cedar Point, Hersheypark has been around for more than a century. Founded in 1906, the park now features more than 70 rides and a zoo spanning 110 acres. Adjacent is Hershey’s Chocolate World, which contains shops, restaurants, and a chocolate factory-themed tour ride which provides free samples at the end. A one-day, adult ticket to Hersheypark costs $67. Ages two and younger are free. Kids age 3-8 and seniors 55-69 are $45. Those older than 70 are $29.

Next: Visit the Roller Coaster Capital of the World.

If your family is full of thrill-seekers, Cedar Point may be the Disney alternative for you. Known as the Roller Coaster Capital of the World, this park, located in Ohio on the shores of Lake Erie, features 16 roller coasters. Cedar Point opened in 1870 and is the second oldest operating amusement park in the country. The park’s normal operating season runs from early May until Labor Day, then only on weekends until the end of October or early November. Ticket prices are $67, but can be purchased for $45 online. (Prices for kids under three and seniors over 61 are $45 always.)

Roller coaster aficionados may be eagerly awaiting the opening of Steel Vengeance, a wood-steel hybrid coaster set to open at Cedar Point in May 2018. The “hypercoaster,” which will set numerous world records, goes up to 205 feet and drops 200 feet. Check out what a front-seat ride on the new coaster will be like:

Next: This theme park in the mountains may feel more doable than Disney. 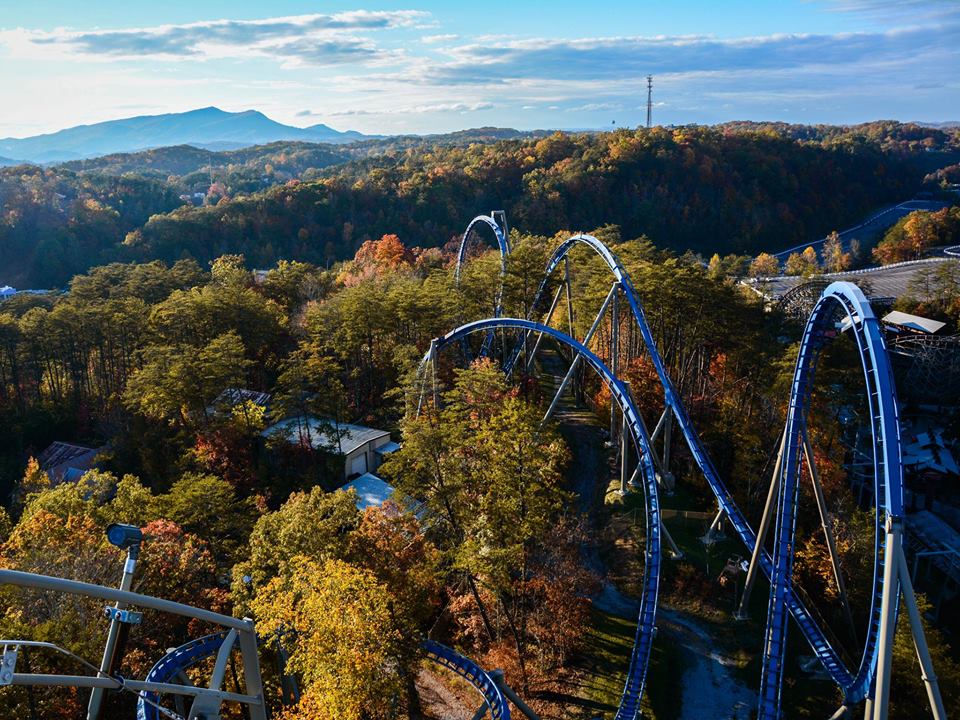 Take in the Smoky Mountains while you get your thrills. | Dollywood via Facebook

Our family has been to Dollywood twice. When our kids were younger, I found it refreshing how Dollywood just seemed so much more doable than Disney, with it being less crowded, which translated to shorter wait times for rides. Dollywood seemed to provide more overall shade than Disney parks, which comes in handy on hot, sunny days. The lower ticket prices were also a welcome respite. Tickets cost $69 for adults age 10-61, $56 for kids age 4-9, and $64 for seniors age 62 and older. The park is located in Pigeon Forge, Tennessee. It’s in the Smoky Mountains, so a well-rounded vacation can be made by combining the Dollywood visit with some hiking and whitewater rafting.

Next: A theme park north of the border features 16 roller coasters. 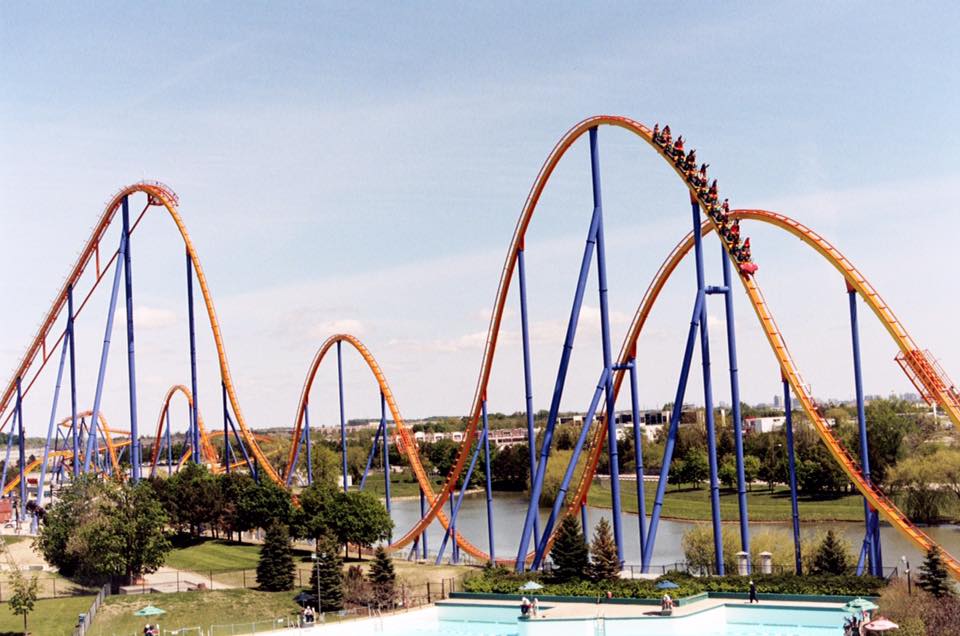 There are plenty of coasters to keep you occupied. | Canada’s Wonderland via Facebook

Canada’s Wonderland, in Ontario, features 330 acres of rides in what is called the country’s first and largest theme park. It is open from May to September and on weekends just before and after those months. The park features 16 roller coasters and has the third most roller coasters out of all theme parks in the world. The $40 online price of an adult ticket will give you free access to the neighboring waterpark, Splash Works, which incidentally features the largest outdoor wave pool in Canada.

Next: This park, near Disneyland yet cheaper, boasts the most coasters in the world.

Featuring 19 roller coasters – more than any other park in the world – Six Flags Magic Mountain, located in Los Angeles, had 3.3 million visitors in 2015. The park recently announced that on Jan. 1, 2018, it will remain open 365 days per year. Tickets for this park can be purchased for cheaper than nearby Disneyland, running $60 for an adult ticket purchased online in advance.

In 2018, the park will debut CraZanity, what it calls the “world’s tallest pendulum ride.” CraZanity will take riders 17 stories into the air and reach speeds of up to 75 miles per hour.

Next: This amusement park turned down an offer from Disney.

Not far from Disneyland in California is a more affordable alternative, Knott’s Berry Farm. The 160-acre amusement park is in Buena Park, California. It opened in 1920 and features 35 rides, including nine roller coasters and two water rides. It sits on the site of a former berry farm owned by the Knott family, which featured a fried chicken dinner restaurant. The family added several shops and other attractions, and the grounds eventually became a theme park, now owned by Cedar Fair Entertainment Company. Tickets are $75 at the gate, but can be had for $45 if purchased online in advance.

In the late 1990s, after their parents passed away, the Knott children were given the opportunity to sell the park to Disney, in which case it would be converted into Disney’s America. The Knotts ended up refusing to sell to Disney, out of fear the sale would result in the destruction of most of what their parents had built in the park.

Next: It’s Christmas year round at this park where a ticket runs less than $50.

Holiday World is a 125-acre amusement park in Santa Claus, Indiana. It is divided into four sections with holiday themes: Christmas, Halloween, Thanksgiving, and Fourth of July. Each area features rides, games, and other attractions. Featured are 51 rides, including three wooden roller coasters and a wing coaster. A ticket to Holiday World also gets you admission to the Splashin’ Safari Water park next door. A one-day adult ticket costs $37, and a ticket for kids under 54” tall or seniors over 60 is $27.

One of the park’s wooden roller coasters, called The Voyage, debuted in 2006 and claimed the record for most air time of any wooden coaster at 24.2 seconds. It was named No. 1 wooden coaster in the world by Amusement Today magazine.

Busch Gardens is a 383-acre theme park featuring a variety of animal species, including gray wolves, bald eagles, and Clydesdale horses. The park features a combination of roller coasters and Broadway-style shows. It is broken into different sections, each associated with a different country. Each section’s rides are themed to their particular country. A one-day, adult ticket costs $77. A child ticket (age 3-9) costs $67. Kids under three are free.

The park features 54 rides, including eight roller coasters and three water rides. Apollo’s Chariot is one of the park’s coasters, featuring dives around ponds and hills.

Next: This park features a ride salvaged after Hurricane Katrina. 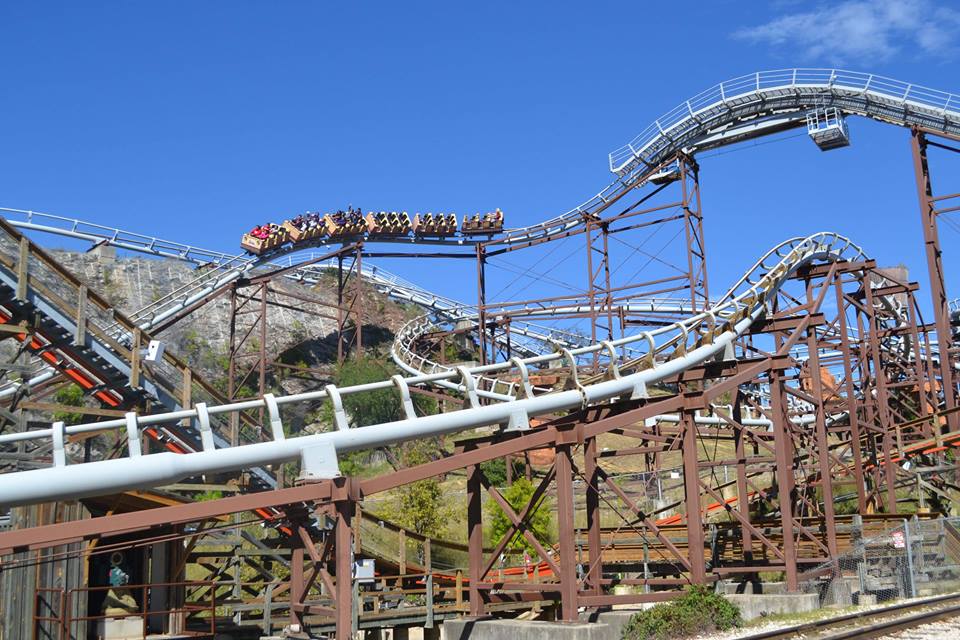 It’s the home to the only ride that survived Hurricane Katrina in New Orleans. | Six Flags Fiesta Texas via Facebook

While it was originally intended to become a Texas-themed, musical show park, Six Flags Fiesta is now 200-acre amusement park. If your family likes rides that drop at a fast pace, the park features the popular ride “Scream!” The tower ride shoots riders nearly 20 stories in the air and drops them twice. Roller coasters include virtual reality Superman Krypton Coaster, the Fireball looping coaster, and a Batman 4D wing coaster. Six Flags fiesta is divided into five themed areas and an adjacent water park.

Price-wise, a single-day adult ticket runs $78 at the gate, but will cost $53 if bought online in advance.

An interesting tidbit about Six Flags Fiesta: When the New Orleans Six Flags was destroyed after flooding resulting from Hurricane Katrina in 2005, the only salvageable piece, “Batman: The Ride,” was moved to Six Flags Fiesta, where it operates now.