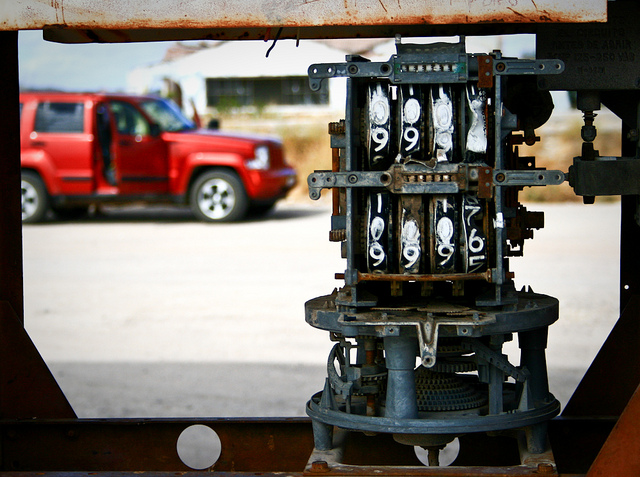 Some retail service stations in the United States have already posted prices below the elusive $3 mark this year, and prices could dip even further before the New Year. U.S. motor club AAA said prices are already at lows not seen since 2010, leaving mid-summer fuel-pump panic long forgotten in the minds of most American commuters. Meanwhile, the cost of living in the United States declined in October for the first time in six months. AAA said, however, it expects fewer commuters will hit the roads this Thanksgiving because they’re still not convinced of the recovery.

As of Wednesday, four states — Arkansas, Kansas, Missouri, and Oklahoma – reported a state average price for a gallon of regular unleaded gasoline below $3 per gallon. The national average Wednesday was $3.21, which is a few cents more expensive than in recent weeks, but still 20 cents cheaper than the same time last year. Still, however, it’s been well over three years since the national average has been below the $3 mark, the longest streak on record.

National security concerns in the Middle East and North America caused oil prices to flirt with $120 per barrel in early 2013. Refinery issues in the Midwest, meanwhile, pushed gasoline prices above the $4 per gallon mark by the middle of the summer. In its short-term market report published last week, however, the U.S. Energy Information Administration said it expects retail fuel prices to average $3.24 per gallon during the fourth quarter. That’s 10 cents cheaper than it predicted in its October report.

For stock indices, the S&P 500 broke new ground this week when it topped 1,800 points and is up more than 30 percent for the year while the Dow Jones Industrial Average itself is up 25 percent for the year.  Fears of inflation, meanwhile, are dwindling as the consumer-price index, which reflects prices for everything from energy to new clothes, dropped 0.1 percent. That means, in general, that it cost less to get by in the United States last month for the first time since April, when retail gasoline prices averaged $3.52 per gallon.

AAA said the national average price peaked at $3.79 in February. After September, refiners in the United States can switch to a winter blend of gasoline, which is cheaper to manufacture because of fewer environmental mandates. Economic data out this week show energy costs decreased 1.7 percent from last month. Brent futures, meanwhile, fell on word that not only was oil was getting out of Libya again but multilateral nuclear negotiations with Iran were moving ahead with a relative sense of optimism. There’s every indication the average U.S. consumer should have a little extra spending cash this holiday season. Lower gasoline prices and an improving economic outlook, however, isn’t enough to convince American consumers to hit the road for Thanksgiving, AAA says.

“While the economy continues to improve, the sluggish pace of the recovery is creating uncertainty in the minds of some consumers, and therefore AAA is projecting a slight decline in the number of Thanksgiving travelers this year,” AAA Chief Operating Officer Marshall Doney said.