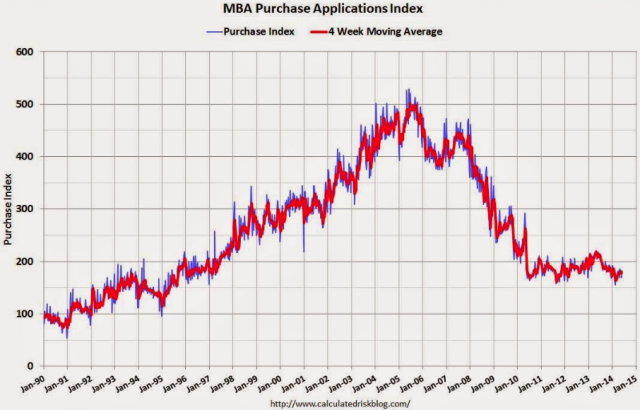 Even though interest rates fell to their lowest level in almost a year, the mortgage market continues to lose momentum. In the latest update from the Mortgage Bankers Association, for the week ended May 23, applications for home loans dropped 3.1 percent on a seasonally adjusted basis from one week earlier. On an unadjusted basis, the index plunged 14 percent.

The Refinance Index, which posted a 1 percent declined in the previous week, fell another 3 percent in the latest report. The seasonally adjusted Purchase Index also decreased 4 percent. The unadjusted Purchase Index posted the biggest move by plummeting 15 percent in only a week and was 17 percent below the same week one year earlier. As the chart above shows, applications have struggled to gain momentum for a sustained period since the housing bubble collapsed.

Although interest rates have been trending lower, housing affordability issues remain as home prices continue to climb higher. In April, home prices jumped 10.5 percent from a year earlier, according to the latest report from CoreLogic. That is the 26th consecutive month of year-over-year price gains. On a month-over-month basis, home prices increased by 2.1 percent in April compared to March.