Mars Mission, Anyone? 8 Posters Will Make You Want a Job in Space

Becoming an astronaut is tough. Most of us need take one quick glimpse at the qualifications before we can throw our dreams of space exploration or of getting any number of NASA jobs out the window. But with a lot of talk surrounding a future Mars mission, discounting those dreams completely has become even more difficult. Though we still don’t know how the Mars mission will come together, exactly, NASA is already trying to get prospective space-farers hyped for potential jobs on the red planet.

That’s right: Mars has jobs, and NASA needs brave explorers willing to be among the first people to ever set foot on another planet.

To raise awareness and start getting people hyped, NASA has released a number of recruitment posters encouraging people to “become a Martian.” Though we’re still a ways off from any real Mars mission lifting off, finding and training astronauts who are willing and able to make the trip and settle on Mars is going to be a long, challenging process. NASA figures it might as well start now.

“Mars needs YOU! In the future, Mars will need all kinds of explorers, farmers, surveyors, teachers . . . but most of all YOU! Join us on the Journey to Mars as we explore with robots and send humans there one day,” NASA’s brief says.

If you’re excited at the prospect of visiting other planets, and can meet the qualifications to become an astronaut, check out these posters for future NASA jobs that will truthfully be out of this world. 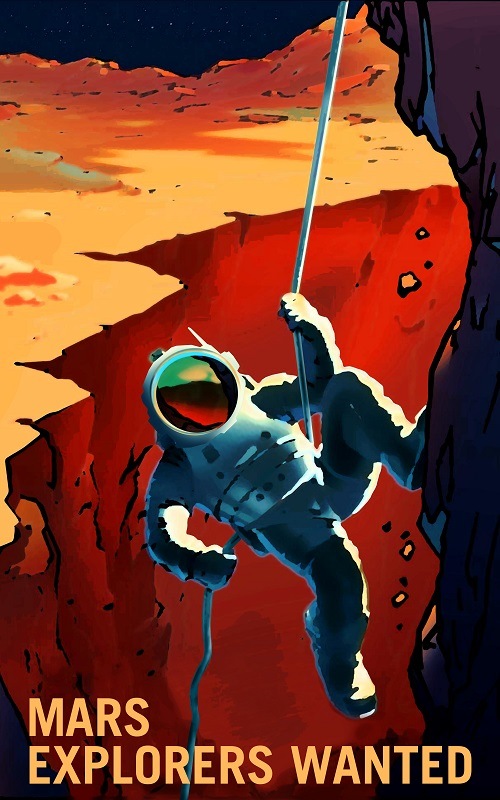 The first thing that will need to be done on the red planet? Exploration. We’ll need to know where to colonize, farm, and everything else. Explorers will figure it all out. “Hike the solar system’s largest canyon, Valles Marineris on Mars, where you can catch blue sunsets in the twilight, and see the two moons of Mars (Phobos and Deimos) in the night sky,” NASA writes. 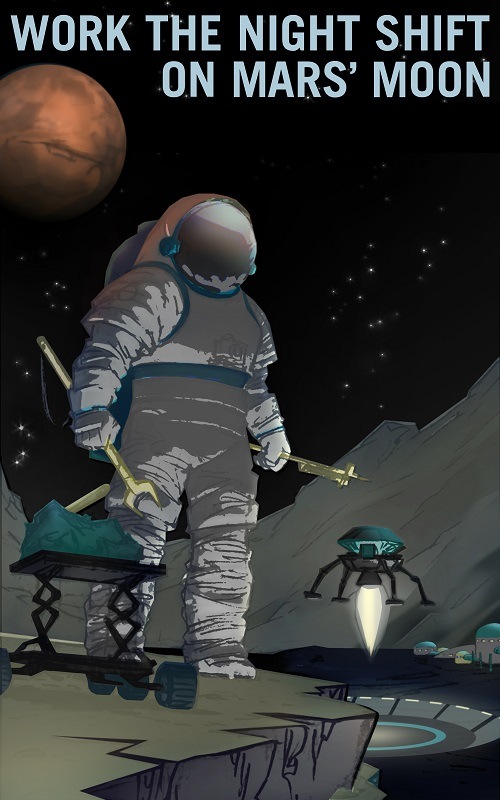 Mining in outer space is going to create vast amounts of wealth, and if you want to live out some sort of real-life Armageddon dream, heading to Mars may be your best option. “Night owls welcome! If you lived on Mars’ moon Phobos, you’d have an office with a view, mining for resources with Mars in the night sky. Settlers below on Mars would see Phobos rise and set not once, but twice in one day!” NASA’s team writes. 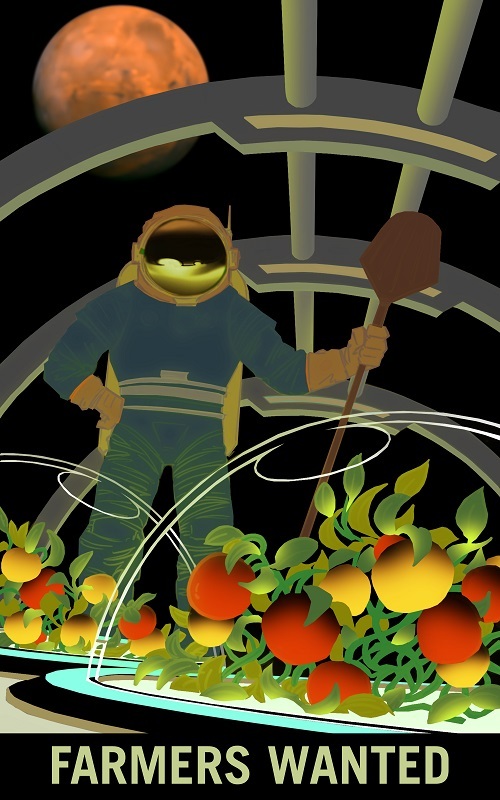 You can’t get UberEATS on Mars, so Martians will need to grow and cultivate their own food resources. That requires farmers and agricultural workers. “Got a green thumb? This one’s for you! In space, you can grow tomatoes, lettuce, peas, and radishes just like you would find in your summer garden. New ways of growing fresh food will be needed to keep brave explorers alive,” says NASA. 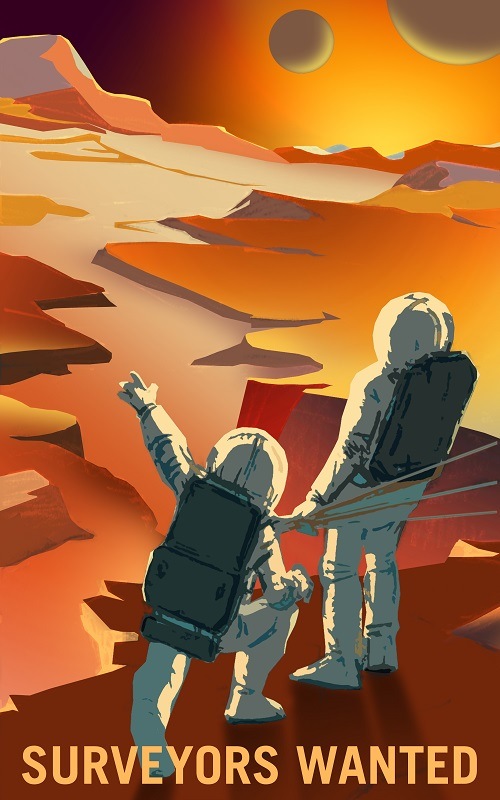 Surveyors will need to work with explorers to map out the Martian landscape. “Just what lies beyond the next valley, canyon, crater, or hill is something we want to discover with rovers and with humans one day too,” NASA says. 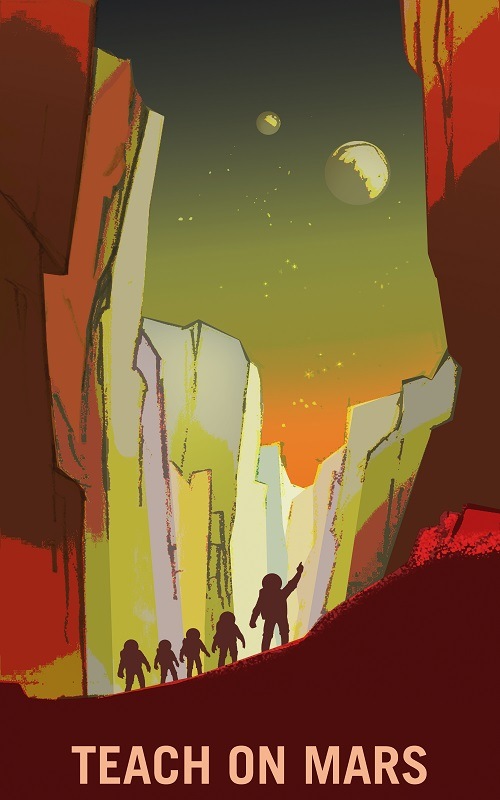 A Martian teacher at work | NASA

Just like on Earth, people living and having children on Mars will need teachers and educators to bring the young ones up to speed. Who knows, you could be shaping the minds of the very first batch of actual Martians! “Learning can take you places you’ve never dreamed of, including Mars and its two moons, Phobos and Deimos. No matter where we live, we can always learn something new, especially with teacher-heroes who guide us on our path, daring us to dream and grow!” 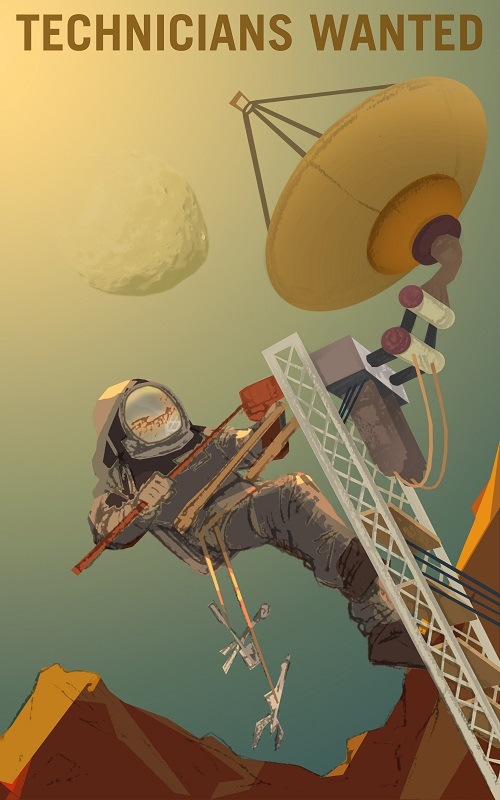 Communications and other infrastructure issues are likely going to be the biggest issue for Martians trying to survive. That means engineers and technicians will be sorely needed to keep things running. “People with special talents will always be in demand for our Journey To Mars. Whether repairing an antenna in the extreme environment of Mars, or setting up an outpost on the moon Phobos, having the skills and desire to dare mighty things is all you need,” NASA’s team writes. 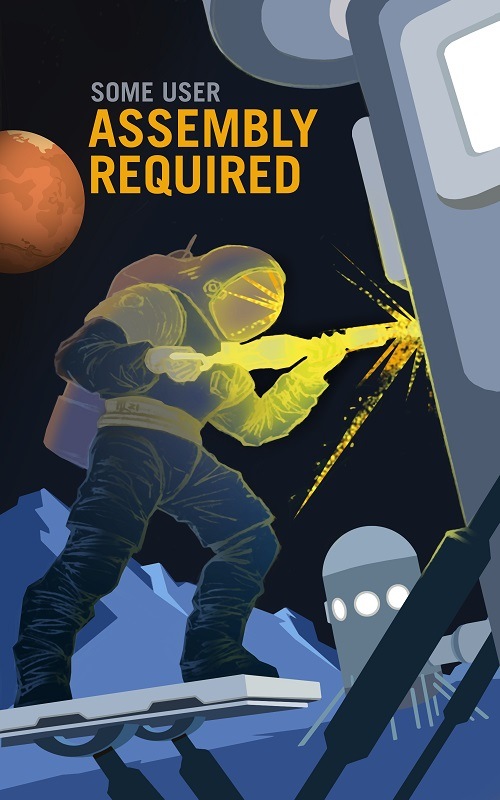 An astronaut repairing a spaceship | NASA

They say that manufacturing and assembly jobs are leaving America en masse, but few would have thought that some would end up on another planet. “Are you someone who can put things together, solving challenges to ensure survival? Dare to forge our future with space-age tools – build spaceships to carry us to Mars and back, and habitats to protect us while we’re there,” writes NASA’s team.

8. The opportunity of a lifetime? 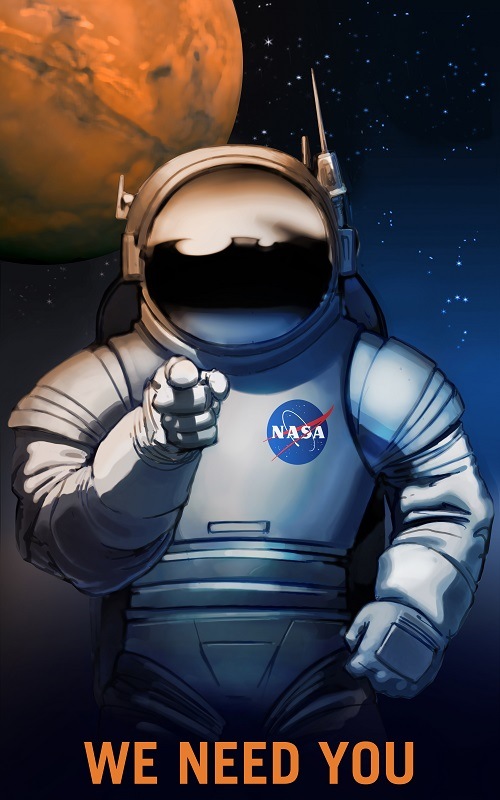 Uncle Sam used to inspire young men and women to join the military, and now, NASA is doing its best to recruit talented people using a similar method.

“We need many things for our Journey To Mars, but one key piece is YOU!”

If you’re not hyped for inter-planet travel by now, you probably never will be.