McDonald’s Mighty Wings Are Flying Back for Another Go-Around 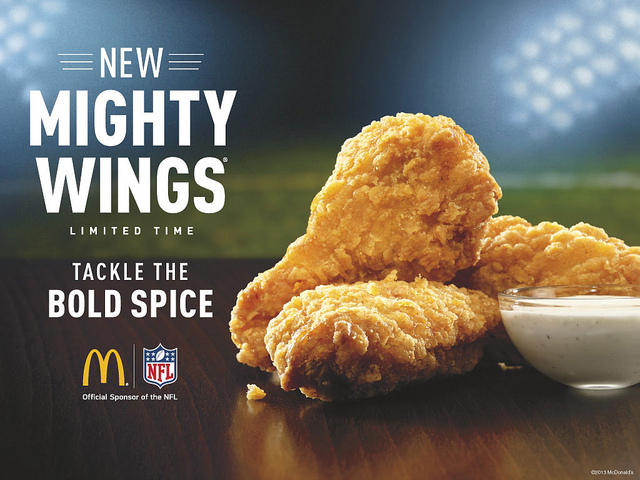 We thought McDonald’s (NYSE:MCD) Mighty Wings had officially flown the coup. We were wrong. They’re back.

Burger Business broke the news Monday that McDonald’s has officially brought back its wings that were a limited-time promotion in September. Though the Oak Brook, Illlinois-based chain had a lot of confidence in the appeal of its football-friendly poultry offering this past fall, going so far as to purchase 50 million pounds of wings, its promotion didn’t exactly go the way it expected. Now, McDonald’s is ready to give the idea another try.

This time around, the chain is rethinking its strategy. One of the biggest issues both consumers and franchisees had with the Mighty Wings were their price. Last year, they were introduced at roughly $1 per wing, leading many chicken-hungry consumers to fly the coop and head over to Yum! Brands’ (NYSE:YUM) KFC, where they could easily get a similar item for much less. Now, the Mighty Wings will retail at five for $3 for their limited-time revival.

In December, McDonald’s franchisees were actually quite angry about the Mighty Wings promotion because it ended up costing them more money than it made. Because the Mighty Wings were priced so high, they sold poorly, and approximately 20 percent of the inventory remained after the promotion concluded. The wings were put in frozen storage — cramping valuable space — and are only now getting set free.

The other problem with McDonald’s past pricing strategy is the Dollar Menu. The chicken came in three-, five-, and 10-piece bone-in chicken wing deals that started at $2.99 and therefore were left off the Dollar Menu unless franchisees wanted to market the sale of one chicken wing. One operator said to Burger Business that it was “hard to sell for $1 per wing when we still [had] the Dollar Menu.”

Now, not only is there the Dollar Menu & More, there is a cheaper price for the wings. With a charge of less than $1 per wing, more consumers are expected to jump on the revived Mighty Wings — and if not, McDonald’s is in for another round of frozen  storage. In addition, for better or for worse, one thing staying the same about the wings is their flavor.

Although CEO Don Thompson admitted a few months ago that the Mighty Wings might have underperformed because “the flavor profile was slightly spicy for some consumers,” the chain is not letting that scare it away from giving its poultry the same kick. Packaging for Mighty Wings continues to call them “Spicy. Bold. Delicious,” and McDonald’s is now hoping to sell what it couldn’t in September.