Michael Kors Stock Is a Must for Your Luxury Collection 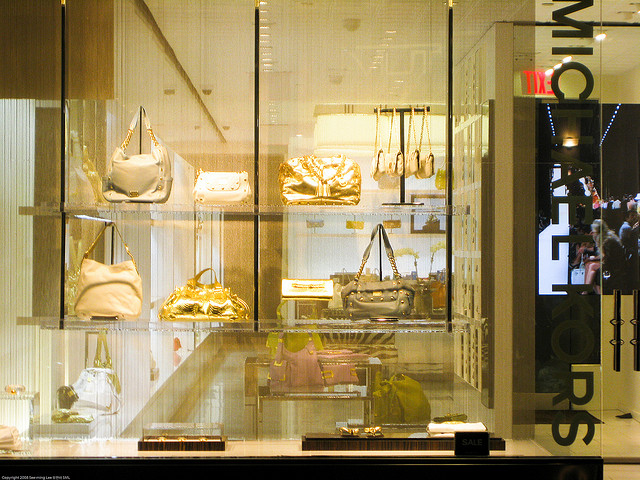 Michael Kors Holdings Limited (NYSE:KORS) is managing to be a successful retailer while many others are struggling. For those unfamiliar, the company is engaged in the design, marketing, distribution, and retailing of branded women’s apparel and accessories, as well as men’s apparel. The company operates in three segments: retail, wholesale, and licensing. The retail segment is involved in the sale of women’s apparel including accessories, such as handbags and small leather goods like wallets. It also sells footwear and licensed products comprising watches, fragrances, and eyewear. It has approximately 405 retail stores. The wholesale segment sells accessories, which include handbags and small leather goods, footwear, and women’s and men’s apparel to department stores and specialty shops in North America and Europe. The licensing segment licenses its trademarks on products, such as fragrances, cosmetics, eyewear, leather goods, jewelry, watches, coats, men’s suits, swimwear, furs, and ties, as well as licenses rights to third parties to sell the company’s products in a number of different geographical regions.

The stock has been very rewarding for shareholders, rising 150 percent in just two years. Can the momentum continue? An examination of the company’s recent performance suggests it is possible.

We delivered outstanding financial performance in fiscal 2014 with comparable store sales growth of 26.2 percent and EPS growth of 63.5 percent. We believe that our expanding global brand awareness is driving continued strong demand for our luxury product and fueling our growth as a global luxury lifestyle brand. In addition, Michael Kors and our talented design team continue to deliver exceptional products while the distinctive jet-set in-store experience that we offer in both our retail stores and our shop-in-shops continues to resonate well with our consumers.

Overall, we have great momentum as we head into fiscal 2015 and remain very excited about our growth prospects for next year and beyond. We continued to see strength across the business in the fourth-quarter, with significant revenue growth in each of our retail, wholesale, and licensing segments as well as in both our North American and international markets. Revenue in North America grew 43 percent and comparable store sales increased 20.6 percent, with performance driven primarily by accessories and watch offerings. In addition, our North America wholesale segment generated another quarter of strong sales growth, particularly in our accessories and footwear categories, and we continued to benefit from shop-in-shop conversions in department stores. In Europe, revenue grew 125 percent in the fourth-quarter, with exceptional comparable store sales growth of 62.7 percent, which we believe was driven by growing brand awareness and demand across regions.

Lastly, in our licensing segment, revenue increased 79 percent, with continued strong performance in watches, fragrance and eyewear. Looking ahead, we remain poised to capitalize on Michael Kors distinct position within the global luxury market as we continue to execute our long term growth strategies.

This lengthy commentary by the Chair and CEO gives me confidence in the company, but so do the numbers. Looking ahead, for the first-quarter of fiscal 2015, the company expects total revenue to be in the range of $840 million to $850 million. This assumes a comparable store sales increase of approximately 20 percent. Diluted earnings per share are expected to be in the range of $0.78 to $0.80 for the first-quarter of fiscal 2015. This assumes 207.5 million weighted average diluted shares outstanding and a tax rate of approximately 33.5 percent.

For fiscal 2015, the company expects total revenue to be in the range of $4.0 billion to $4.1 billion. This assumes a comparable store sales increase in the high teens. Diluted earnings per share are expected to be in the range of $3.85 to $3.91 for fiscal 2015. This assumes 208.6 million weighted average diluted shares outstanding and a tax rate of approximately 33.5 percent. Overall, with the performance this company and its management are delivering, the stock is an excellent long-term buy and I assign a $125 price target given the expected increase in earnings.

Disclosure: Christopher F. Davis holds no position in Michael Kors and has no plans to initiate a position in the next 72 hours.