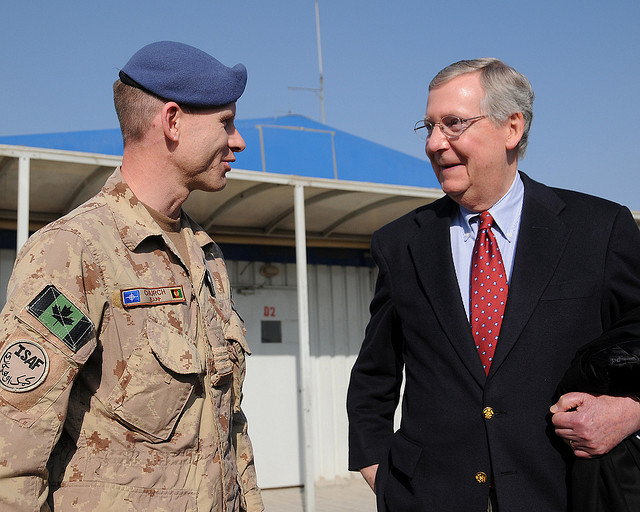 Senator Mitch McConnell (R-Ky.) is hailed by some as a much-needed voice of reason and the answer to cross party cooperation over Obamacare, the shutdown, and the debt ceiling. However, conservatives may see him as more the equivalent of a Republican Judas.

On Face the Nation, the Senate Minority Leader seemed to address both parties when he said, “I don’t think a two-week paid vacation for federal employees is conservative policy. A number of us were saying back in July that this strategy could not and would not work, and of course it didn’t.”

His position as co-negotiator with Senator Harry Reid (D-Nev.) in ending the shutdown last week — or putting it off to avoid default at least — gives him a particularly appealing voice, one that insists “there will not be another government shutdown. You can count on that.”

This positive sentiment comes with what some Republicans probably see as an admission of defeat — “We have a math problem in the Senate in getting rid of Obamacare,” he said on Face the Nation. “It’s the following math problem: fifty-five Democrats and forty-five Republicans. We can only control a portion of the government, and so that limits our ability to get rid of this horrible law,” said McConnell.

Matt Bevin — McConnel’s challenger in the upcoming primary for Kentucky — spoke angrily of his opponent in a Taylorsville meeting hall, according to the Washington Post. “I don’t feel he represent us or that he’s frankly, even in touch with where we are,” said Bevin, adding, “I think these last several days have helped to indicate some of that. There’s a certain amount of disdain.”

While Bevin did raise a total $220,000 last quarter, with $600,000 additionally taken from his own wallet, McConnell far surpasses him with $2.3 million raised in parallel and a total of $10 million.

“I don’t personally believe Matt Bevin has gained any traction in this campaign. His message is essentially that Mitch McConnell is friends with Barack Obama. If you listen at all to Mitch McConnell, you know that he has been the biggest thorn in Barack Obama’s side,” said GOP strategist Scott Jennings.

In his own defense, McConnell referenced his many conservative supporters on Face the Nation. “I enjoy the support of the most famous tea party senator in America, Rand Paul. I’m supported by Marco Rubio. Pat Toomey — two other tea party favorites who were elected in 2010. I have the support of Mike Huckabee and Bill Bennett. I think they’re going to have a hard time convincing Kentucky primary voters that Mitch McConnell is some kind of liberal,” said McConnell.

Don’t Miss: This Is What Fact-Checking Ted Cruz Reveals.