U.S. equity markets advanced Wednesday afternoon despite starting the day with one foot in the red. Early in the day, stock futures suggested that continued uncertainty over the developing situation in Syria and the dubious status of the U.S. Federal Reserve’s asset-purchase program would weigh down the major indexes, but a battery of relatively positive news has helped bolster sentiment.

At the top of the order is the Beige Book, a summary of commentary gathered from the 12 Federal Reserve districts that provides an outlook on the economy. The report is published eight times per year, usually about two weeks before the Federal Open Market Committee meets (the next meeting is scheduled for September 17-18), and provides an anecdotal — as opposed to explicitly quantitative — outlook of economic conditions.

All told, August’s report was manna for the cautious optimist: “Reports from the twelve Federal Reserve Districts suggest that national economic activity continued to expand at a modest to moderate pace during the reporting period of early July through late August.”

As nebulous as the terms may seem, “modest” and “moderate” have been consistently used by Fed economists to describe economic conditions for the past several months, if not years. The language — “economic activity expanded at a modest pace” — which makes appearances in everything from FOMC meeting minutes to policy statements – seems intentionally and appropriately flexible.

The recovery to date, as measured by the Fed’s preferred metrics of employment and price stability, has been uneven. Headline measures of unemployment, which the Fed has targeted as one threshold for policy action, though improving, often paint a rosier picture of the labor market than is justified. The headline rate doesn’t include marginally attached or discouraged workers — those who are underemployed and those who have given up on searching for a job — and is sensitive to changes in the labor force participation rate.

The latest Employment Situation report, for example, shows that headline unemployment declined 0.2 percentage points on the month to 7.4 percent in July, its lowest level since President Obama took office at the beginning of 2009. Payrolls increased by a modest but healthy 162,000, and the total number of unemployed people edged down slightly, to 11.5 million.

But as of July, the labor force participation rate was 63.4 percent, down substantially from its pre-crisis level of about 66 percent. This reduction reflects the fact that many Americans are simply giving up on the search for work. The number of long-term unemployed in the U.S. — those without work for 27 weeks or more — is 4.2 million, or 37 percent of the total unemployed.

“For most occupations and industries, hiring held steady or increased modestly relative to the prior reporting period,” the Federal Reserve said in the Beige Book, summarizing reports from the 12 districts. “Hiring in manufacturing rose modestly. St. Louis reported increases in employment at a variety of manufacturing firms connected to the auto industry or the home construction industry. Boston, Richmond, and Minneapolis reported shortages of some types of skilled manufacturing workers.”

Gains in manufacturing employment have been hard fought, and the employment indexes of various regional and national manufacturing purchasing managers’ reports have generally seen lagged increases in overall activity. The highly watched employment component of the PMI, compiled by the Institute for Supply Management, declined 1.1 points on the month in August to 53.3, still indicating growth but at a slower rate than before. 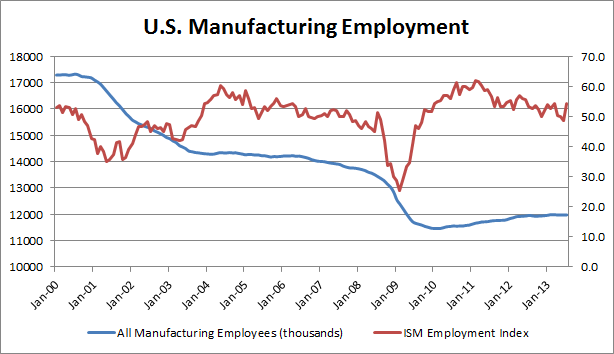 Wednesday’s Beige Book seemed to confirm that the economy is still on the track forecast by Fed policymakers earlier this year. Projections compiled by U.S. Federal Reserve policymakers are calling for a headline rate between 7.2 and 7.3 percent in 2013, which seems feasible barring contagion from any of the numerous micro-crises brewing around the world, including within the U.S. itself. Congress is due to tackle the debt ceiling debate again in the coming months, which could spell disaster for confidence.

If conditions remain stable, the headline rate is expected to fall further in 2014, to between 6.5 and 6.8 percent, and possibly to between 5.8 and 6.2 percent in 2015 before entering a longer-run range between 5.2 and 6 percent. Some economists have suggested that so-called full employment in the U.S. would tolerate a headline unemployment rate of about 5 percent.