Monro Muffler Brake Is Roaring Ahead of the Competition 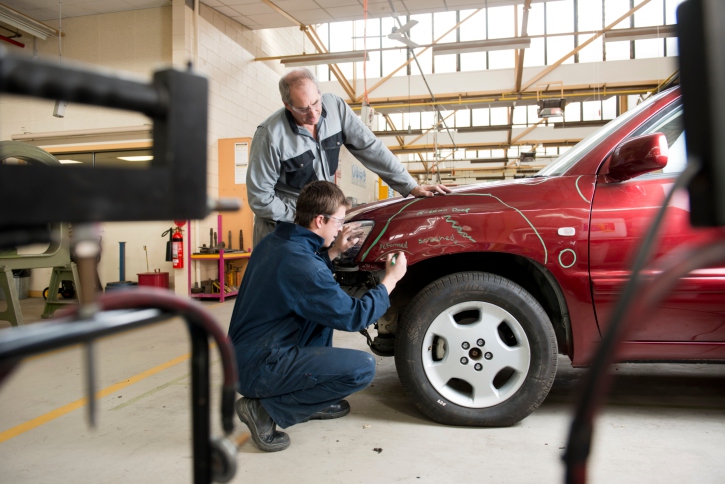 The stock has been a winner in the last two years, rising 60 percent. Can the stock continue to motor ahead? An examination of the company’s performance is justified.

Sales for the most recent quarter, the company’s fourth and final of fiscal 2014, increased 3.7 percent to a record of $203.2 million as compared to $195.9 million for the fourth-quarter of fiscal 2013. The sales increase for the fourth-quarter was due primarily to an increase in sales from newly acquired stores, offset by a comparable store sales decrease of 1.3 percent. Comparable store sales were relatively flat for the maintenance and exhaust categories, and decreased approximately 2 percent for tires, brakes, and alignments, and 3 percent for front end/shocks.

Gross margin improved 190 basis points to 37.9 percent in the fourth-quarter from 36.0 percent in the prior year due to reduced material costs and payroll control. Total operating expenses declined on a percentage basis. They were $55.6 million, or 27.4 percent of sales, as compared with $55.1 million, or 28.1 percent of sales, for the same period of the prior year. The decrease in operating expenses as a percent of sales is due to leverage from higher overall sales and focused cost control, partially offset by higher utilities due to the more severe winter weather.

Now, when we look at the results for the year, the bullish case sets up nicely. For the entire fiscal year of 2014, net sales increased 13.6 percent to $831.4 million from $732.0 million for fiscal 2013. The total sales increase for the fiscal year of $99.4 million was due to an increase in sales from recently acquired stores, partially offset by a 0.5 percent decrease in comparable store sales. Gross margin improved 50 basis points to 38.5 percent for fiscal 2014 as compared to 38.0 percent in the prior year due to reduced product costs, payroll control, and leverage of distribution and occupancy costs, which more than offset a sales mix shift to the lower margin tire category, related primarily to recently acquired stores.

We are very pleased with our team’s ability to deliver earnings results ahead of expectations for the fourth-quarter due to 1 percent higher comparable store tire units, improved margins, our ongoing focus on cost control, and continued outperformance of our recent acquisitions. While we were hopeful that consumer spending would have been stronger, we were encouraged that we ended fiscal 2014 with positive traffic driven by an increase of 1 percent in comparable store oil change and tire units for the year, demonstrating that customers are continuing to service their vehicles at our stores.

At the same time, we experienced some weather-related disruption to our business in the fourth-quarter, while throughout the fiscal year, we saw customers continue to delay purchases and trade down from higher cost tires and automotive maintenance and repair purchases. Notably, customer acceptance of our expanded tire offerings, and our execution on our recent acquisitions, were better than planned and drove our significant increase in operating margin for the quarter and the year. Overall, we ended fiscal 2014 strongly positioned to continue leveraging our flexible business model and pursuing our disciplined acquisition strategy. We remain confident in our ability to further increase our market share and deliver strong sales and earnings growth in both strong and weak environments.

Looking ahead, the company anticipates fiscal 2015 sales to be between $875 and $905 million. Comparable store sales in fiscal 2015, which now include the acquisitions made in fiscal 2013, are anticipated to increase in the range of 1 percent to 4 percent. Fiscal 2015 diluted earnings per share are expected to be in the range of $1.95 to $2.15, an increase of 17 percent to 29 percent as compared to $1.67 diluted earnings per share in fiscal 2014. The estimate is based on 32.8 million weighted average shares outstanding. For the first-quarter of fiscal 2015, the company anticipates comparable store sales to increase in the range of 2 percent to 3 percent. The company expects diluted earnings per share for the first-quarter to be between $0.52 and $0.55, with the fiscal 2015 acquisitions slightly dilutive, as compared to $0.42 for the first quarter of fiscal 2014. First-quarter comparable store sales to date are up 2 percent, on top of a 3 percent increase for the same period in the first quarter of fiscal 2014, due to positive oil change and tire units and strength in its service business.

Given the excellent quarter and the bullish outlook, I believe shares of Monro Muffler Brake will continue to rise. The results and guidance are very favorable and as such I rate the stock as a buy and assign a $65 price target.

Disclosure: Christopher F. Davis holds no position in Monro Muffler Brakeand has no plans to initiate a position in the next 72 hours. He has a buy rating on the stock and a $65 price target.