Navy’s Rebuff of the Hornet Sends Boeing Straight to Washington 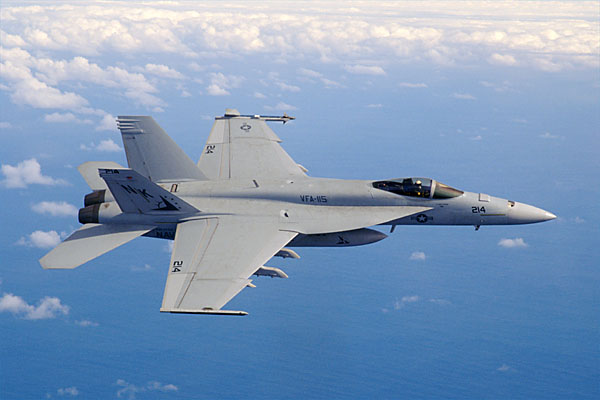 In the wake of the U.S. Navy’s decision not to fund the production of fighter jets from Boeing (NYSE:BA), the aircraft manufacturer is appealing directly to Congress to ensure that its production line in St. Louis, Missouri, remains open. The Navy’s fiscal 2015 annual budget declined to include funding for new F/A-18E/F Super Hornets or EA-18G Growlers, Reuters reports.

Boeing is hoping that the federal government will be able to include funding for the planes when the White House submits its 2015 budget request to Congress on March 4. Sources told Reuters that although the 2015 budget does not include funding for shutting down the F/A-18 production line in St. Louis after 2016, the Navy plans to add such termination funding to its 2016 budget, the news service said.

The Navy funding is crucial to Boeing’s ability to continue producing the jets, so the loss of that contract plays a big role in Boeing’s military aerospace future. Though the Navy is keen on keeping the jets, budget constraints have forced the division to make some cuts.

Reuters further notes that many “defense hawks” in Congress have either died or left, while many current lawmakers are more concerned about deficits than maintaining defense spending.

Though Boeing declined to comment on the matter, Reuters reports that the company has been mobilizing its Washington task force in efforts to win over valuable congressional votes. Boeing offered $1.3 million to individual lawmakers and political action committees last year, spending a further $15.2 million on lobbying efforts, making Boeing the 13th largest lobbying spender by the Center for Responsive Politics’ calculations.

In order to keep costs down, Boeing’s F/A-18 program manager, Mike Gibbons, said to Reuters that Boeing has to build two planes per month. That would result in the need for at least $$1.2 billion in additional funding, though Boeing is examining the possibility of combining the F/A-18 and F-15 production line to save money. The F-15 program is slated to run through 2018.

However, fellow aerospace and defense contractor Lockheed Martin (NYSE:LMT) manages just one F-16 jet per month, so industry experts note that Boeing could conceivably operate the program at a lower production rate.

Brett Lambert, a former top Pentagon official, told Reuters that lawmakers still viewed F/A-18 purchases as a hedge against possible delays in the F-35 fighter jet program, although he said the program was more stable than just a few years ago.