How Many Americans Rely on the Family Bank for Money Problems? 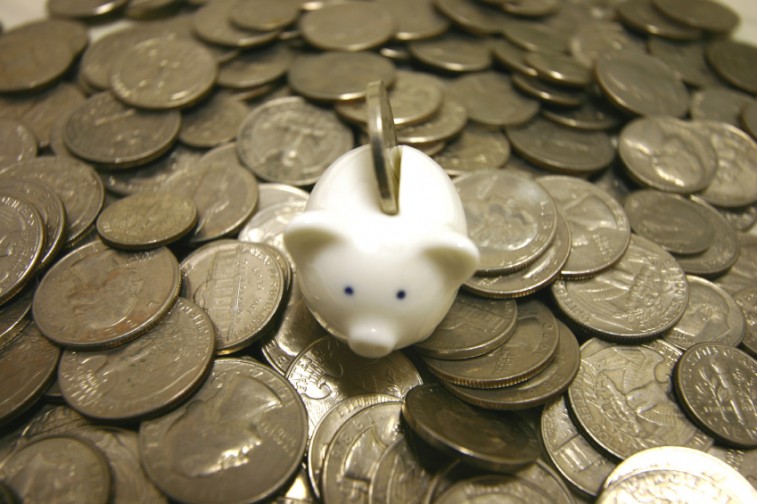 You only live once, but that doesn’t mean you should throw caution to the wind when it comes to saving money. Spending less than you earn is a simple concept that still proves to be a daunting challenge for too many Americans, as citizens of the world’s largest consumer market continue to lack a healthy amount of emergency savings. Making matters worse, research finds a heavy dependence on the family bank, which may not always be open for business.

Nearly a third of Americans can’t pay for life’s little surprises with cash. According to a report from Bankrate.com, 29% of Americans have no emergency savings, up from 26% last year and the highest percentage recorded over the past five years. Only 22% of respondents have enough savings to cover at least six months’ of expenses, while a mere 15% have enough to cover expenses for 3 to 5 months. Thirteen percent didn’t even know how much they had or declined to answer the question.

“These results are further evidence that Americans remain woefully under-saved for unplanned expenses,” says Greg McBride, CFA, Bankrate’s chief financial analyst. “And rather than progressing, (Americans) are moving in the wrong direction. Nothing helps you sleep better at night than knowing you have money tucked away for a rainy day.”

Unfortunately, Americans are no stranger to a savings drought. In separate recent reports, Bankrate.com finds a quarter of consumers have more credit card debt than emergency savings, and only 38% have enough money in their savings to pay for an expected bill, such as a $500 car repair or a $1,000 emergency room visit. If a financial emergency arises, 16% plan to borrow money from family and friends. In fact, relying on the family bank appears to be an emerging strategy.

The younger generation is making more withdrawals from older generations. New research from the Employee Benefit Research Institute (EBRI) finds the generational transfer of money flows downhill. From 1998 to 2010, 44.6% of older households (age 50 and above) made money transfers to their children or grandchildren. As the chart below shows, this trend has been gaining popularity. 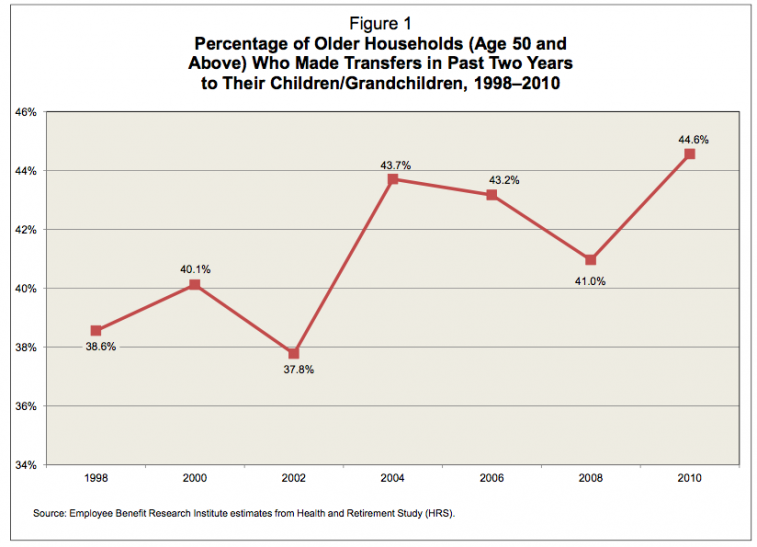 During a two-year period between 2008 and 2010, the average amounts transferred by households who had at least one member between ages 50-64 and ages 85 or above were $8,350 and $4,787 respectively. In comparison, the average transfer amounts from younger family members to older households are much smaller. During the same two-year period, households that had at least one member ages 85 or older received an average amount of only $359, the highest average transfers among all age groups.

Older generations aren’t simply transferring money to pay a cellphone bill here and there; they are covering major purchases — everything from down payments to retirements. Half of millennial homebuyers surveyed by Trulia plan to ask their parents or grandparents for help with the down payment. Meanwhile, HSBC finds 43% of American retirees continue to provide regular financial support to at least one other person, including 10% who still support at least one adult child. Forty-nine percent of working-age people expect to receive an inheritance which will support them later in life.

Is there anything wrong with relying on the family bank? Aside from feeling like a financial leech or fueling stereotypes reminiscent of living in a parent’s basement, the biggest risk is the family bank may not exist when you need it most. HSBC’s survey finds 59% of working age Americans expect to leave a financial legacy to their children, but only 31% actually receive one. Relying on others can be expensive.