Will a College Degree Improve Career Opportunities in 2015?

The class of 2015 and those beyond may have some lofty expectations, but they certainly are a tenacious bunch. As this year’s college and high school grads grab those diplomas, throw their hats in the air, and head to The Sizzler for a little post-ceremony celebration with family and friends, the rest of the economy gets to brace for an influx of new participants in the labor pool.

“Employers are recruiting new college graduates at levels not seen since the dot-com frenzy of 1999-2000,” said economist Phil Gardner, director of Michigan State University’s Collegiate Employment Research Institute. “Competition for qualified candidates is escalating to a degree rarely seen in the past 10 years.”

Gardner and his MSU colleagues have just released the findings of the 2014-2015 recruiting survey, to which almost 5,700 companies responded and gave insight into their hiring plans. The good news is that from the data gathered, it’s expected that new grads should see a hiring spike as high as 16% this year — the highest those expectations have been at any time in the past 15 years.

“The vast majority of employers were fairly confident about the strength of the college labor market this year,” the survey reads, “eighty-four percent hired at least one new college graduate during 2013-14. This year, 97 percent will do so.”

As for what’s driving the changes to the labor market, more than one-fifth of the businesses that reported increased hiring are doing so because older workers are retiring, and opening up previously-filled jobs. Nearly half of businesses reported that turnover, not necessarily from retirement, was another big driver in their personnel needs. Even more, 66%, said that growth was the primary focus, and bringing new talent on board was part of a strategy to expand.

If there’s anything to take away from that, it’s that the economy evidently feels strong enough for people to retire, leave the jobs they have, and for businesses to invest in growth — not merely staying afloat.

Now, to the juicy bits.

While it’s great news that employers are making room for this year’s grads, the big question on their minds has got to revolve around what industries, and what types of positions, are expected to be available. First, as the chart lifted from the study indicates, companies of all sizes are expected to be hiring graduates with all kinds of degrees, with one exception — small to midsize companies with between 101-1,500 employees are expecting a 5% decrease in hiring of graduates with Master’s degrees.

Other than that, the numbers are high. Particularly among MBA grads seeking work at big businesses, as there is an 82% expected spike in hiring. 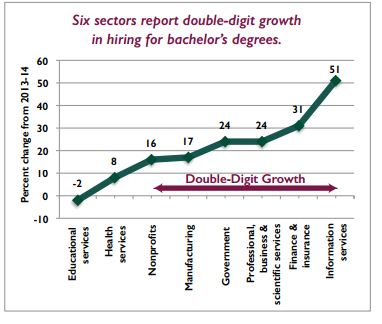 Another chart, also included with MSU’s release, shows which specific industries are reporting major growth. On the right, you can see that double-digit growth in hiring for bachelor’s degrees is anticipated in some rather huge and important sectors of the economy, such as manufacturing, health services, and government. Finance, insurance, and information services are expected to see the most growth, with information services seeing a 51% increase in just one year.

All good news, but there are still reasons for grads to temper their expectations. Some economists are saying that just because this year’s class may have a jump on others in terms of getting their foot in the door right out of school, there’s still plenty of strife ahead. Research from the left-leaning Economic Policy Institute — also covered recently by Fast Company — says that though things are better, younger members of the labor pool are still struggling with high unemployment figures. That is due to a variety of factors, including a lack of work experience.

The result is that college grads have been increasingly taking positions that don’t actually require a college degree, and in turn make less money, don’t put more money back into the economy as they buy goods and services, and effectively perpetuate the cycle. Again, there are signs that things are turning around, but this is something to be aware of.

Not to rain on the parade of new graduates, and the optimism surrounding the economy as of late, but it’s important to keep things in check. So celebrate, class of 2015, but getting your foot in the door is just one step — advancing and earning more is next.