No More Spills: Will This New Tech Transform Oil Pipelines?

The 2010 Kalamazoo spill and the 2013 Exxon (NYSE:XOM) leak in Arkansas are the most glaring incidents, but these are just the big leaks that are found right away and reported. Most leaks are found eventually — but there is money to be saved and damage to be avoided by catching them at the smallest rupture. Right now, we rely on pigs in the pipeline to do this.

It’s called “pigging”. Pigs are inspection gauges that can perform various maintenance operations on a pipeline — from inspection to cleaning — without stopping the pipeline flow. The first “pigs” were used strictly for cleaning and they got their name from the squealing noise they emitted while traveling through the pipeline. The current generation of “smart pigs” can detect corrosion in the pipeline and are thus relied on for leak detection.

The Kalamazoo and Arkansas leaks were massive and caused by complete pipeline ruptures. These are rare incidents that account for less than 10 percent of leaks. But the small leaks — those that traditional pipeline detection systems don’t catch — account for more than 90 percent of U.S. pipeline leaks.

According to a recent report from the U.S. Department of Transportation Pipeline and Hazardous Materials Safety Administration, the majority of leaks are smaller but can persist for months or even years, and those that are even reported are generally done so by people who have stumbled upon them by accident. 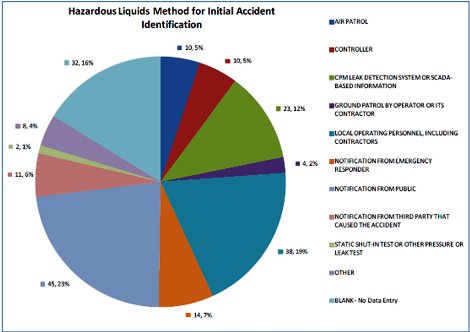 The fact remains that current systems and technologies only detect 50 percent of leaks. We need new solutions if we want to avoid another Arkansas, or another Kalamazoo. A case in point is this: A SCADA system was working normally on the Pegasus pipeline in Arkansas at the time of the rupture and helped Exxon verify that an accident had occurred. Pegasus did not, however, have a Computational Pipeline Monitoring program in place on the pipe. It wasn’t enough. Indeed, in late 2012, PHMSA issued a 17-page warning to Exxon about its insufficient pipeline leak detection.

Then we have Keystone XL, which is always in the spotlight, most recently when TransCanada said it would opt out of new pipeline leak detection systems and stick with traditional methods that many believe are not good enough.

The 90 percent+ of leaks are small and more of a concern for the miles and miles of aging pipelines that crisscross the US, while new pipelines, like Keystone XL will benefit from new technologies during their construction, such as better pipe metallurgy and better welding. This will mean less chance of leaks, but not a zero chance. The fact is that the leak detection systems that will be used by new pipelines like Keystone XL (assuming it gets the green light), are not really any better than the current fare.

There is new technology floating around out there — but it’s new and relatively untested in the marketplace. RealSens remote-sensing pipeline detection technology aims to pick up where SCADA and the pigs leave off, detecting leaks over an entire pipeline network.

According to Banica, Synodon’s CEO, realSens can actually save companies money by detecting the leaks sooner and faster and thus reducing the amount of spilled product and the environmental damage. But it’s a new technology that was only introduced into the market 12 months ago.

Still, some of the big operators remain skeptical of new pipeline leak detection systems, as their cost-saving applications are as yet unproven. “The first hurdle is that operators might not be aware that it exists and what the capabilities are. The second hurdle is that they have a hard time believing it works and have to see proof through customer field tests, which are currently ongoing,” Banica told Oilprice.com.

But the issue of pipeline leak detection will increasingly be on everyone’s radar following the Quebec train disaster that killed at least 38 people, and counting. No pipeline failure has ever come close to this level of human carnage. This will help shape the transport debate.

What the Quebec tragedy demonstrates, says Banica, is that pipelines are a far better option than rail. “Whereas pipelines do not kill as many people as rail (or even truck transport, as more drivers die due to accidents), they do pose a bigger environmental risk than rail due to larger potential leaks and releases.”

Disclosure: Synodon is a client of OilPrice.com.