When Donald Trump and Kim Jong Un historically met on June 12, 2018, both were whisked to and from the Singapore summit in style. They each traveled in stretch limousines heavily equipped to meet all their needs — and of course, their personal security. Here we’ll compare the leaders’ luxurious sets of wheels.

See what quirky, in-vehicle amenity Kim won’t travel without (page 5). Also, check out the male bonding moment as Trump offered Kim a peek into his own kitted-out ride (page 8). 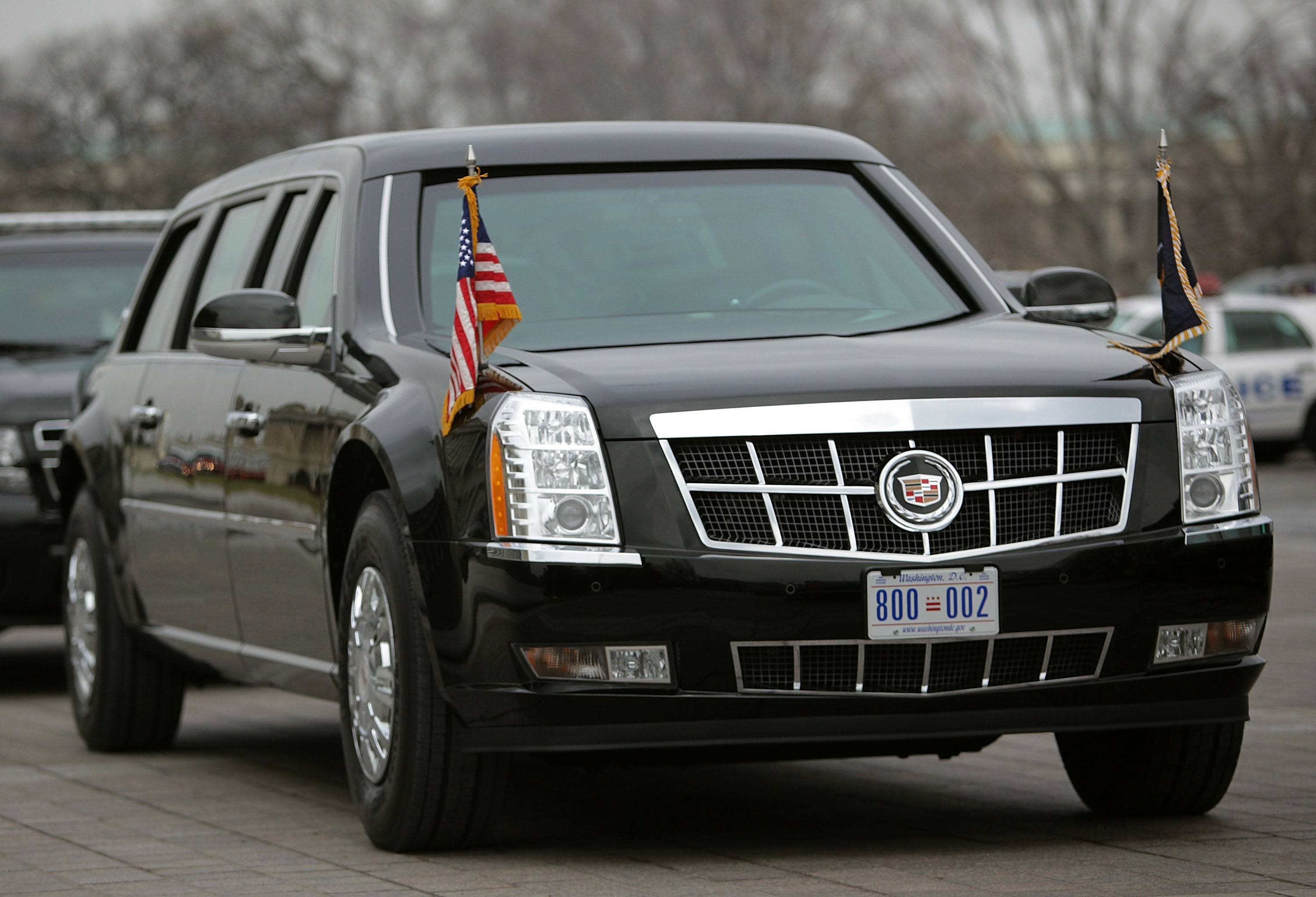 Trump received his brand new presidential limousine in 2017, known as Cadillac One and “The Beast.” The highly customized custom General Motors vehicle actually has little in common with a standard production car. However, the black and silver ride sports tail lights and Escalade headlamps keep it looking Cadillac-like.

Kim was first spotted in his Mercedes-Benz S600 Pullman Guard limousine in 2014. It is unclear how the dictator acquired it as Mercedes is banned in North Korea.

Next: How these cars could survive a war of mass destruction 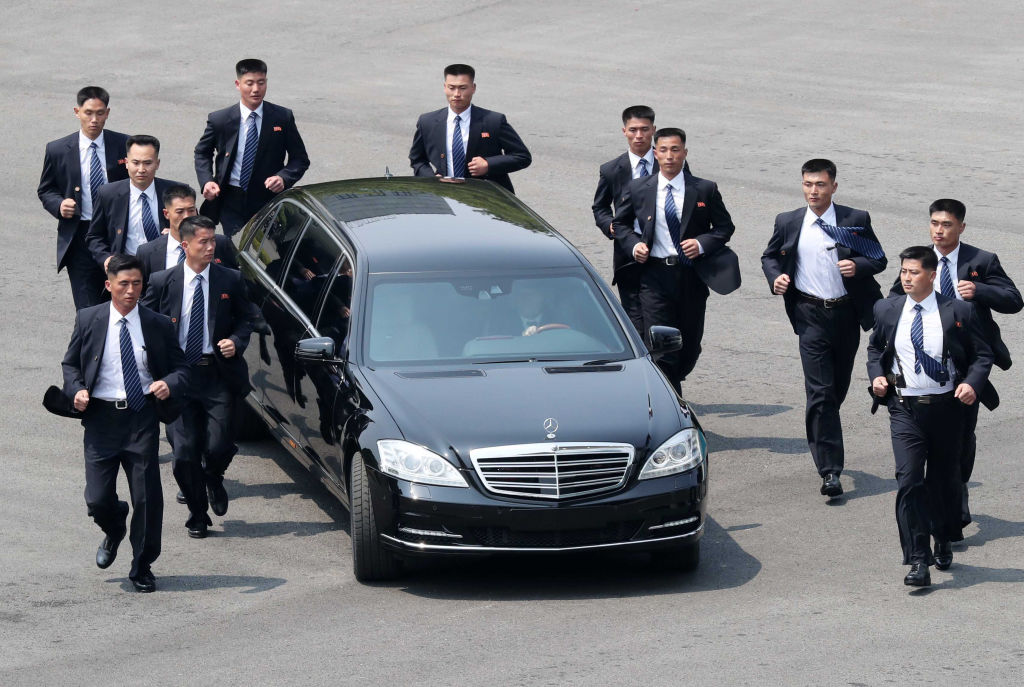 Trump’s Caddy is equipped to the nines with safety features and weaponry. It’s bullet-proof and bomb-proof, and the cabin seals for protection against chemical and biological attacks. It contains tear gas cannons and guns hidden on the front grille. And someone’s thought of everything, as the trunk contains vials of blood in the president’s type, in case of medical emergency.

Kim’s bullet-proof ride, built like a tank, features armored floors to protect occupants from bomb blasts. Ultra-thick, laminated glass windows are coated with polycarbonate on the inside to prevent splintering.

Next: Whose is bigger? 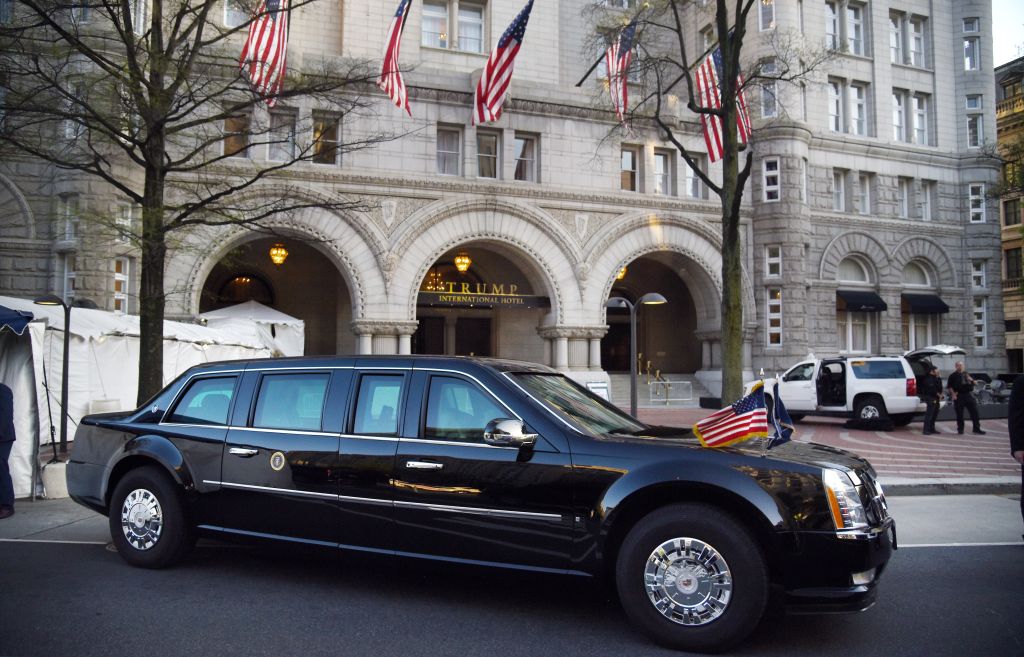 Although it’s shaped like a sedan, Trump’s Caddy is based on a truck platform. The super sturdy vehicle tips the scales at around eight tons (that’s 16,000 pounds, but the exact weight is classified) and is 18 feet long. The doors are made of eight-inch-thick armor plating, with the windows a sturdy five inches thick.

Kim’s ride, also shaped like a sedan, is a bit lighter, but its 5.5-ton weight (that’s 11,000 pounds) is still more than double what many ordinary cars weigh. Length-wise, it’s a few feet longer than Trump’s presidential limo, clocking in at 21 feet long.

Next: One is definitely faster. 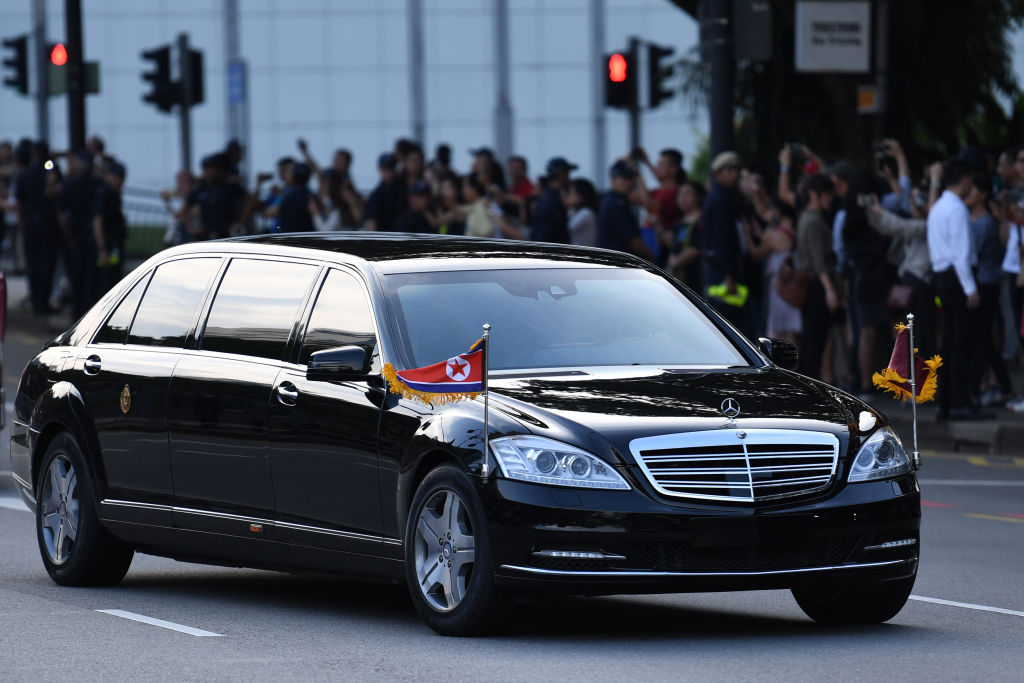 Trump’s “The Beast” comes packed with a Vortec 8.1-liter V8 engine. It runs on gasoline rather than diesel, Autoweek reports. Due to the car’s heavy weight, it only reaches up to 60 mph and only gets up to eight miles per gallon.

Kim’s Mercedes is built with a twin-turbocharged 6.0-liter V12 engine. Its top speed reaches 99 miles per hour — significantly more than Trump’s Caddy. (We know who would win in a drag race.)

Next: Interiors more comfortable than a nice home? 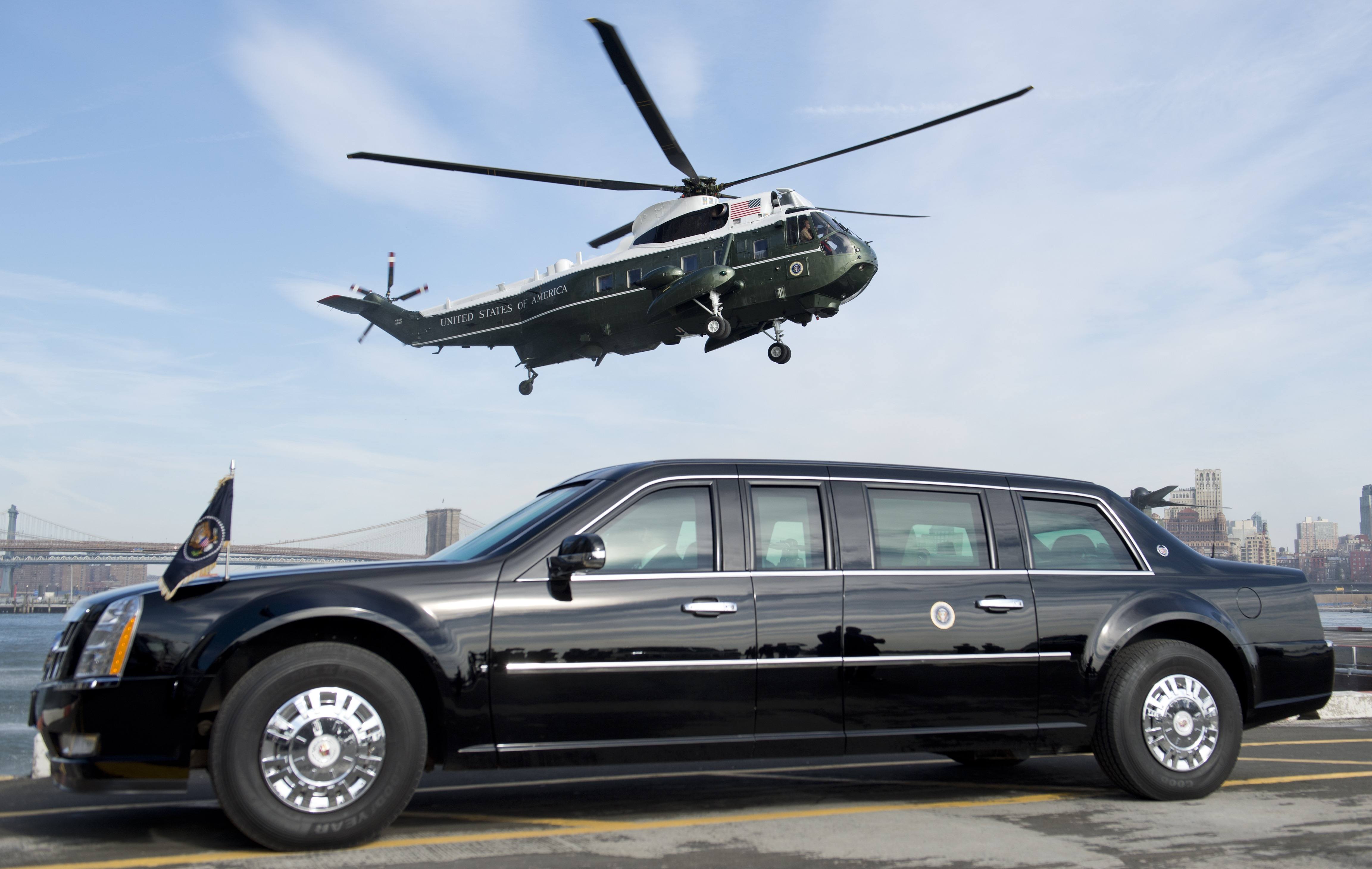 Kim’s ride is kitted out with special features designed for his comfort. Backseat passengers recline on white leather captain’s chairs with private jet-like legroom. But the one most fascinating aspect about the limo is it has a toilet inside. (Because what dictator has time for a pit stop at the nearest McDonald’s?)

We know less about the interior of Trump’s custom Caddy. The previous presidential limo (Trump got his new one in 2017) featured a backseat bench covered in dark blue cloth. Trump did give Kim a quick peek inside. (More on that coming up.)

Next: Whose car cost more? 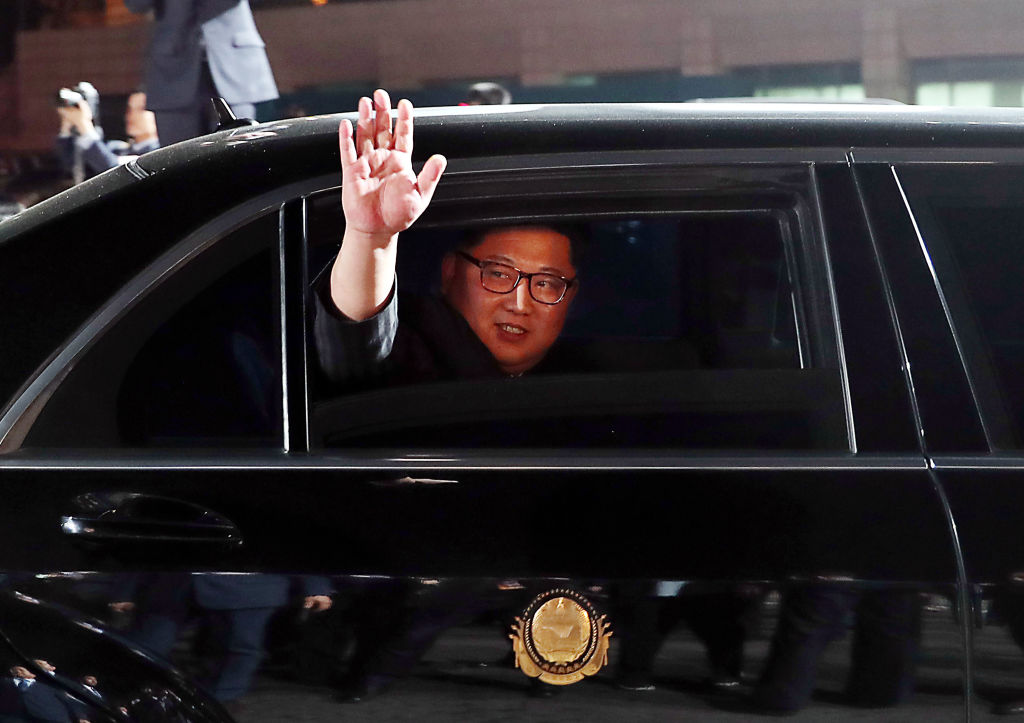 Trump’s Caddy cost up to $1.5 million to build. And there are 12 of them in the presidential fleet, to boot. As for maintenance, there’s at least one person whose job centers around the vehicles: A mechanic travels with the cars. This armed federal agent carries a large assortment of electronic diagnostic devices and tools, Autoweek reports.

Kim’s older Mercedes model was sold between 2008 and 2013. During that time, the vehicle sold for around $1 million. Nowadays, the armored S600 Pullman Guard lists for $1.57 million in its native Germany.

Next: How the cars got to the island summit

7. How the cars got to Singapore ‘The Beast’ being transported to Asia. | U.S. Secret Service via Twitter

In addition to sending their leaders, aides, and security personnel to the island off of southern Malaysia, both countries dealt with the logistics of getting their vehicles there. While Trump usually flies aboard Air Force One, all the vehicles in his motorcade are loaded onto an enormous C-17 Globemaster transport aircraft.

While Kim flew in on an Air China jet, his stretch limo arrived in Singapore on a Russian-built cargo plane operated by North Korea’s national carrier, Air Koryo.

Next: See Trump showing off his car to Kim. Car goals, Kim? The reclusive dictator has a penchant for Western luxuries, according to reports. He smiled broadly when Trump offered him a peek inside Cadillac One, as aides rushed to open the doors and photographers jockeyed for a good shot. The moment occurred as the two leaders, who appeared relaxed in each other’s company, strolled the grounds after their meetings and a working lunch.