Not Every Part of the Housing Market Is Improving 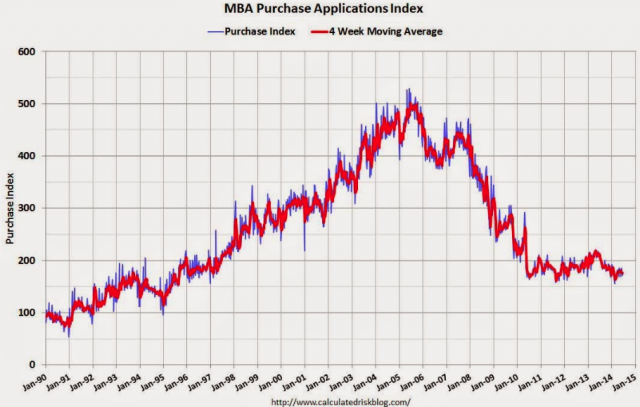 Several areas of the housing market have shown improvement in recent months after a slow start to the year, but the mortgage market is still struggling to attract homebuyers. According to the Mortgage Bankers Association’s latest update, for the week ended June 27, applications for home loans dipped 0.20 percent on a seasonally adjusted basis from one week earlier. On an unadjusted basis, the index fell 1 percent.

The Refinance Index, which has declined 14 percent over the past two weeks, only managed to increase 0.1 percent. The seasonally adjusted Purchase Index decreased 1 percent. The unadjusted Purchase Index also declined 1 percent and was 16 percent below the same week a year earlier. As the chart above shows, applications have struggled to gain momentum for a sustained period since the housing bubble collapsed.

Despite the sluggish mortgage market, home sales have improved recently. Last week, the National Association of Realtors reported that existing-home sales in May rose almost 5 percent from April, the highest monthly gain since August 2011. In a separate report, the U.S. Census Bureau revealed that sales of new single-family houses in May surged 18.6 percent month-over-month. It was the fastest pace for new home sales in six years.

On Monday, the NAR also revealed that the Pending Home Sales Index posted its third consecutive monthly gain in May and reached its best level in four years. Sales were higher in all major regions of the country.