Obamacare: Both the Best and Worst of Obama’s Presidency 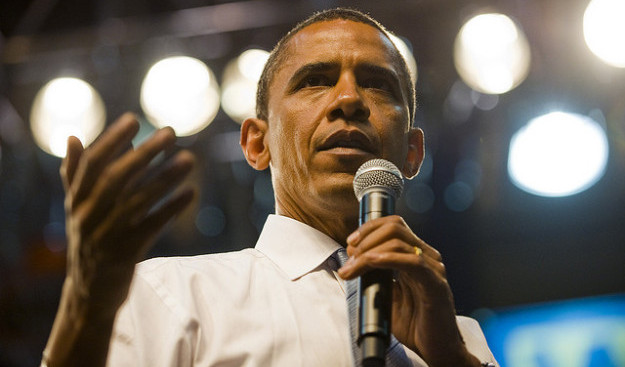 The verdict on Barack Obama’s presidency won’t be rendered for years or decades — if even then, given the continuing revision of a president’s legacy that inevitably takes place after a term ends. But after Obama has spent almost five years in office, Americans are certainly in a position to think about his greatest achievements and biggest failures so far. That’s what Gallup asked them to do as part of its December 5-8 survey.

These perceived achievements and failures will do much to outline history’s verdict of Obama’s eight years in office. The recent attention given to the implementation of his health care reform law is by no means temporal. Policy analysts judge the Affordable Care Act to be hugely important to the president’s legacy, primarily because it represents one of the clearest examples of Obama’s political philosophy – that is, his belief that government is “the very engine of collective action and the ultimate source of national greatness,” as political commentator Charles Krauthammer recently wrote in an op-ed for the Washington Post.

The December poll conducted by Gallup echoes a similar line of thought: The Affordable Care Act was chosen by respondents as both his greatest achievement and biggest failure, an indication that no matter an individual’s political inclinations, health care reform is hugely important in guiding the trajectory of the United States into the future. 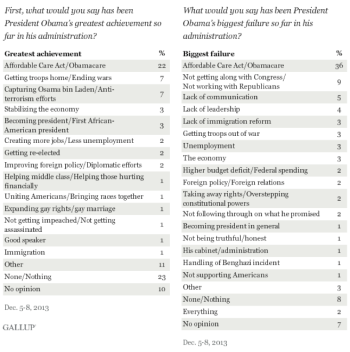 Obamacare, as the Affordable Care Act is colloquially known, was not just the top response in both categories — it was the most popular answer by a large margin. Of those Americans polled, 22 percent said health care reform was the president’s greatest achievement. The second most popular response, “getting the troops home/ending wars,” tallied just 7 percent. A slightly greater number, 36 percent, said the Affordable Care Act is his biggest failure, while 9 percent of respondents chose “not getting along with Congress/not working with Republicans.”

“That significant proportions of Americans apparently can view the healthcare law as either a positive or a negative underscores its controversial status in recent domestic policy,” wrote Gallup’s Frank Newport. “This is not necessarily unusual. President George W. Bush’s supporters clearly saw U.S. involvement in the Iraq war as a positive, while his detractors saw it as a negative. Similarly, some saw President Lyndon B. Johnson’s Great Society programs as a great achievement, and others saw them as a major mistake.”

It must be remembered that the reasons for respondents choosing the Affordable Care Act are numerous. Some may have sympathized with the opinion of Republican Sen. Ted Cruz of Texas, who during an August interview with radio host Rush Limbaugh suggested that if the cornerstone provision of the Affordable Care Act — the individual insurance exchanges — were allowed to take hold and flourish, the U.S. will find itself on the slippery slope to a destroyed health care system as another entitlement program to bankrupt the country.

Others may have seen the implementation of health care reform as an administrative failure, with the problems plaguing the rollout of the online insurance marketplaces casting serious doubt on whether the president had paid close enough attention to the details. For Democratic-leaning voters, the problem could be that Obamacare did not go far enough.

On the other hand, there are several reasons to call the Affordable Care Act one of Obama’s achievements. Not only will it provide insurance to millions who have long gone without coverage, but, as Darrell West, the Brookings Institution’s vice president and director of governance studies, told CNN early last month, the combination of Obamacare and immigration reform “would be a huge boon to the Democratic Party,” as those policies are likely to attract many voters.

Ultimately, the great division over the success of the Affordable Care Act reflects the dual perceptions the public has of the president, who has garnered much press both for being an ineffectual administrator and for being one of the most idealistic presidents in decades.