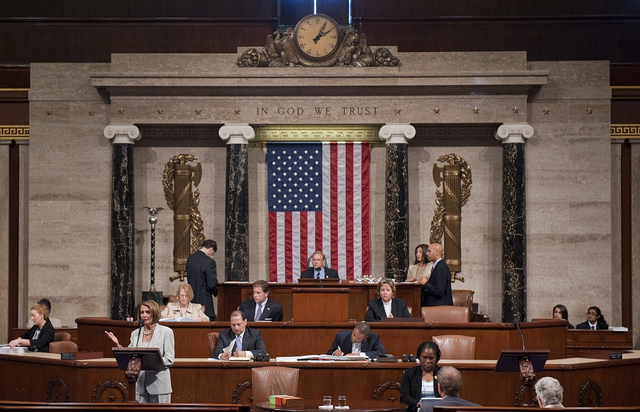 The House of Representatives has H.R. 3350 on the docket Friday, the Keep Your Health Plan Act of 2013 sponsored by Rep. Fred Upton (R-Mich.). With first votes expected around 10:30 a.m. Eastern Time and the last to start around 12:30 p.m., according to House Majority Leader Eric Cantor’s (R-Va.) website, whatever action the House takes will come roughly 24 hours after President Barack Obama offered an administrative fix to the Affordable Care Act.

The bill in the House says “a health insurance issuer that has in effect health insurance coverage in the individual market as of January 1, 2013, may continue after such date to offer such coverage for sale during 2014 in such market outside of an Exchange.” The plans that are allowed to continue will then “be treated as a grandfathered health plan for purposes of the amendment made by section 1501b of the Patient Protection and Affordable Care Act.”

Obama introduced the administrative fix during a news conference on Thursday — it extends canceled plans into 2014, provided insurers are willing to continue offering that coverage. Insurance companies who chose to continue offering those plans must also notify customers that said plans do not meet the standards established by the Affordable Care Act, and that there could be a better option on the health care exchange.

This action comes after the Obama administration fell under attack for failing to keep a promise that if consumers like their health care plans they could keep them. It also comes after enrollment data were released, which showed that in the first month of open enrollment, 106,185 people selected a plan in the marketplace. This dismally low number, which missed expectations, is reduced further when the federally facilitated marketplace is evaluated: Then, only 26,794 people selected a plan.

The combination of the president’s snafu of what coverage could continue combined with low numbers that could hurt the economics of the health care law had House Democrats mulling the idea of joining Republicans in voting for H.R. 3350. Politico sources say that as many as 100 House Democrats may have voted for the bill.

But the White House solution has removed some Democratic support for H.R. 3350. “For now, the president’s actions are sufficient, and I think his actions will resolve matters that most of our members are concerned about,” Rep. Elijah Cummings (D-Md.) told Politico.

The administrative fix has relieved pressure, but not the will to act. The onus of responsibility for decisions about coverage has now shifted from lawmakers to insurance providers. Sen. Mary Landrieu (D-La.) had introduced legislation, S. 1642, to the Senate before the president’s remarks on Thursday. According to the Washington Post, Landrieu told reporters Thursday that “The president’s guidance was welcome and well-received, but we still may have to fashion some legislation, and we’re going to continue to work that.”

House Minority Leader Nancy Pelosi also said that there is complementary legislation being developed by House Democrats. “We have our own proposal, which we think is really good,” Pelosi said during a news conference. “I think that we’ll see in the next 24, 48, 36 hours something to the effect of how do we accommodate those people.” Her statements were given during the Washington Ideas Forum and printed by Politico.

Republicans are not satisfied with the Democratic proposals or the administration’s actions. “True to form, it appears this is little more than a political response designed to shift blame rather than solve the problem. This problem cannot be papered over by another ream of Washington regulations,” Speaker of the House John Boehner (R-Ohio) said in a statement.

Boehner went on to add: “Americans losing their coverage because of the president’s health care law need clear, unambiguous legislation that guarantees the plan they have and like will still be allowed. That’s why the House will be voting on the Keep Your Health Plan Act tomorrow, and the president should support it.”

On Thursday, the White House issued a statement saying “H.R. 3350 rolls back the progress made” under the Affordable Care Act. “The Administration supports policies that allow people to keep the health plans that they have. But, policies that reverse the progress made to extend quality, affordable coverage to millions of uninsured, hardworking, middle class families are not the solution.”

The White House believes H.R. 3350 is a rehashing of previous political battles “to sabotage the health care law.” For these reasons, Obama said he plans to veto the bill if it is passed.

The Rules Committee decided Thursday evening that the bill would proceed to the House floor and be debated for one hour before voting takes place. No amendments can be considered.