The 1 Thing Hope Hicks Did That Surprised Us All

The announcement of Hope Hicks’ departure from the White House was a surprise for some. However, she left her job at a time when the cons of staying put obviously outweighed the pros.

Here’s a rundown of Hicks’ journey to the Trump administration. We’ll look at what she actually did all day at the White House (page 4), what Donald Trump called a “stupid” mistake (page 6), and the one thing that surprised us all (page 15).

The woman Trump trusted the most 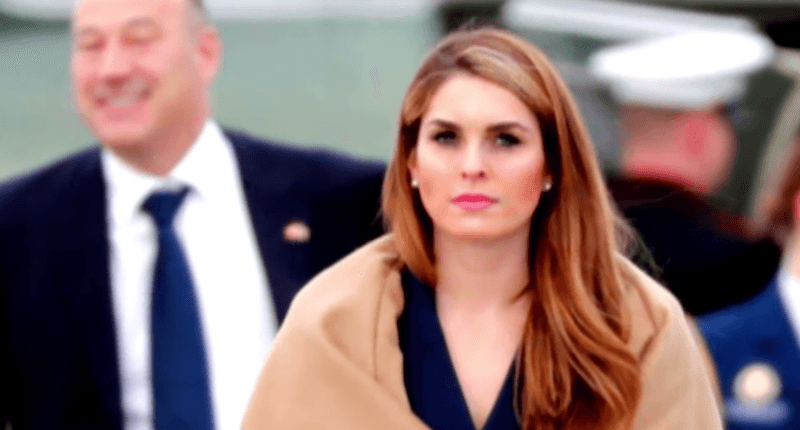 She was one of Trump’s closest advisers. | MSNBC via YouTube

Hope Hicks was one of President Donald Trump’s closest advisers. She understood him, and she protected him no matter the cost. Hicks and Trump have a close bond that not many understand, which explains why he reportedly treats her like a daughter. The New York Times describes her as Trump’s confidante and gatekeeper. The next person who takes on Hicks’ job will have big shoes to fill.

Next: She has a knack for bad news.

The bearer of bad news 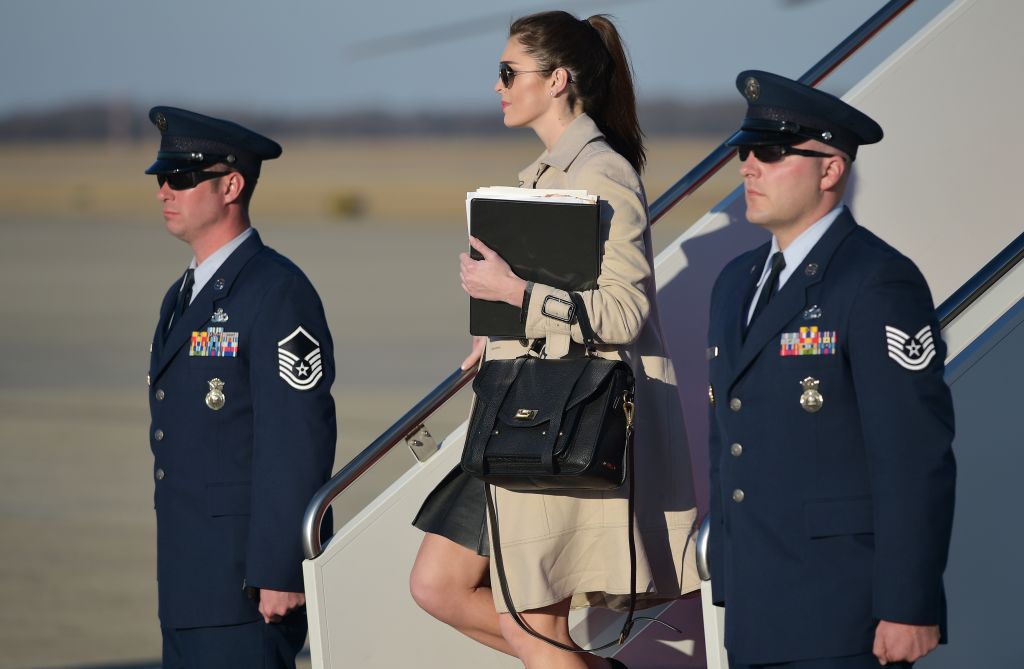 Hicks was good at delivering bad news to the president. | Mandel Ngan/AFP/Getty Images

Trump trusts Hicks so much that part of her job was to tell him any negative news. “She always has impeccable timing,” Jason Miller, the Trump campaign’s former senior communications adviser, said in an interview for Town & Country magazine. “When a bad story would come up, she would volunteer, saying, ‘I’ll just go and tell him; I got it.’ We all had to do it. She was just better at it.”

Next: A shoulder to lean on 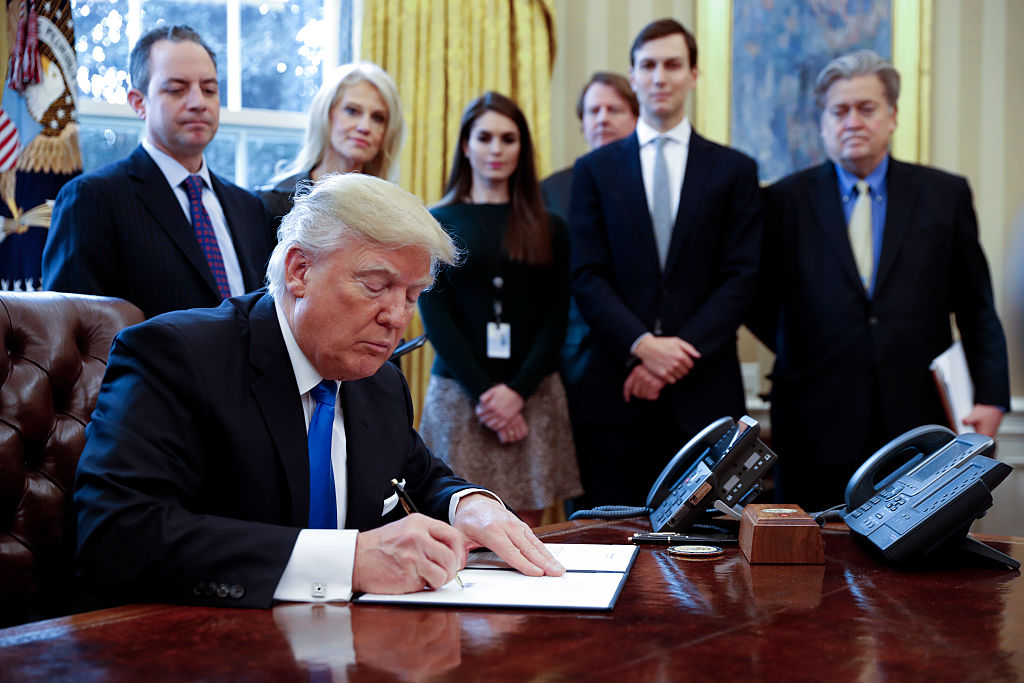 She was seen as someone who could get through to Trump. | Shawn Thew-Pool/Getty Images

Apparently, Hicks gives good advice. In a New York Times article, Trump praised Hicks for her ability to counsel him.

“I’m lucky to have her. She’s got very good judgment. She will often give advice, and she’ll do it in a very low-key manner, so it doesn’t necessarily come in the form of advice. But it’s delivered very nicely,” said Trump. Now that his most loyal employee is on her way out, some wonder how that will affect Trump.

Next: What was her job?

What exactly did Hope Hicks do all day? 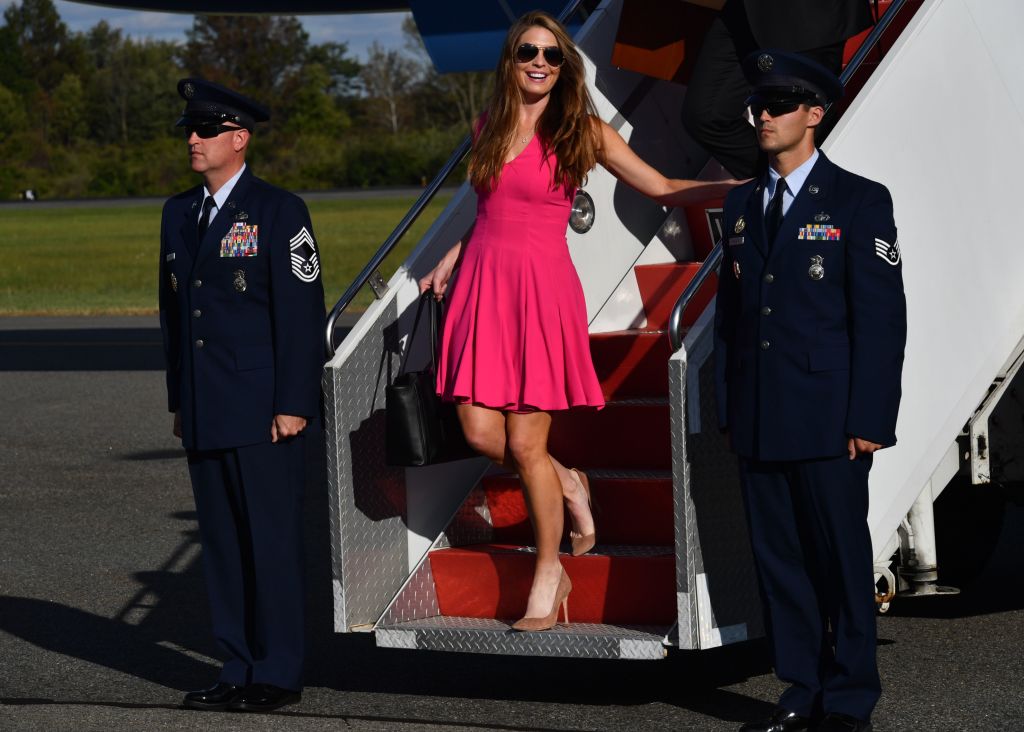 Hicks’ silence added to the confusion about her role at the White House. | Nicholas Kamm/AFP/Getty Images

It’s hard to say because Hicks became famous for her silence. She tried her best to stay out of the spotlight, and for a short amount of time, she was successful. Cheri Jacobus, a reporter for The Hill, proposes Hicks’ role was primarily to be a means of emotional support for Trump. Jacobus quotes an anonymous Twitter user who compared Hicks to a “comfort goat.” Writes Jacobus:

A nameless person on twitter mused that the most recent in a long line of outgoing White House communications directors, Hope Hicks, never really has been a communications director, but rather her role was similar to that of the “comfort goat” placed in the stall of Secretariat to keep him calm. While Donald Trump is certainly no Triple Crown winning thoroughbred, the analogy seems otherwise apt.

Apparently, Jacobus’ article caused a stir. Shortly after it was posted on The Hill website, it was taken down. Jacobus decided to post her article on her Facebook page instead. 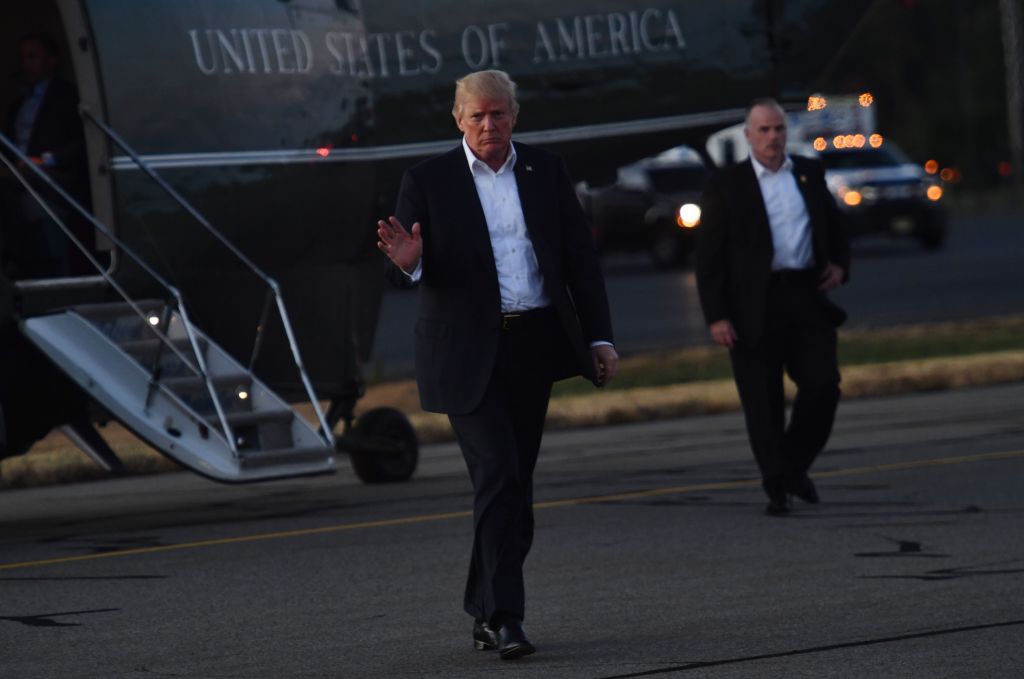 Trump would get his suits steamed while he was wearing them. | Nicholas Kamm/AFP/Getty Images

Hicks has been a loyal employee from the beginning. Apparently, Donald Trump likes to be wrinkle free at all times. He’s so serious about his appearance that he had Hicks steam his suits while he was still wearing them, according to Let Trump Be Trump, a tell-all book by former campaign manager Corey Lewandowski. When Hicks was press secretary during Trump’s presidential campaign, she took her job quite seriously. Lewandowski said in his book:

“[Trump would shout,] get the machine! And Hope would take out the steamer and start steaming Mr. Trump’s suit, while he was wearing it! She’d steam the jacket first and then sit in a chair in front of him and steam his pants.”

Next: A mistake that was hard to recover from 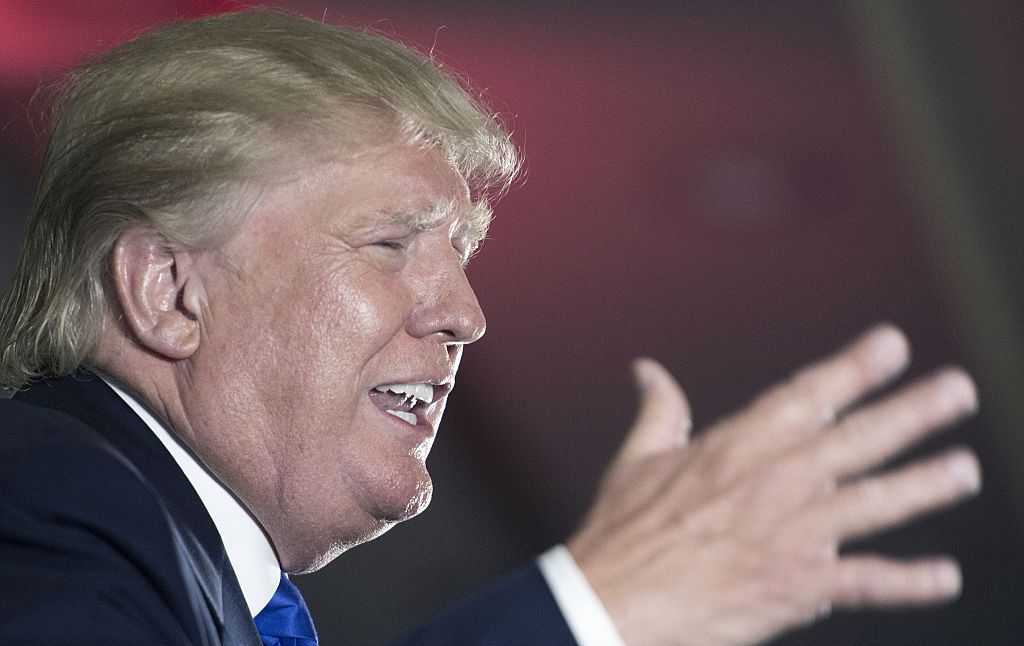 Trump reportedly wasn’t too thrilled with Hicks’ admission during the House Intelligence Committee meeting that she lies for him. A White House source told The New York Post that Trump was angry and asked: “How she could be that stupid” to admit she tells “white lies” for the president. Perhaps this was the last straw for Hicks, who was in tears, according to CBS News.

Next: A disturbing pattern

Not the first time 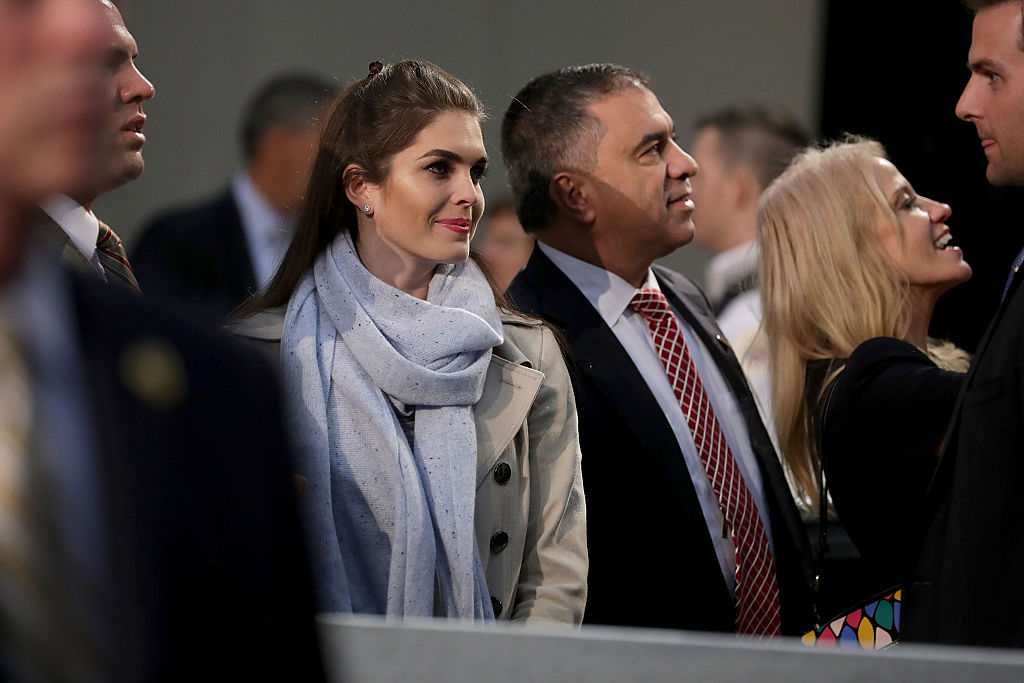 This wasn’t the first time Trump reportedly yelled at Hicks. According to insiders, this was a regular occurrence, especially when he was on the campaign trail.

Next: Is Hope Hicks coming out with a tell-all? 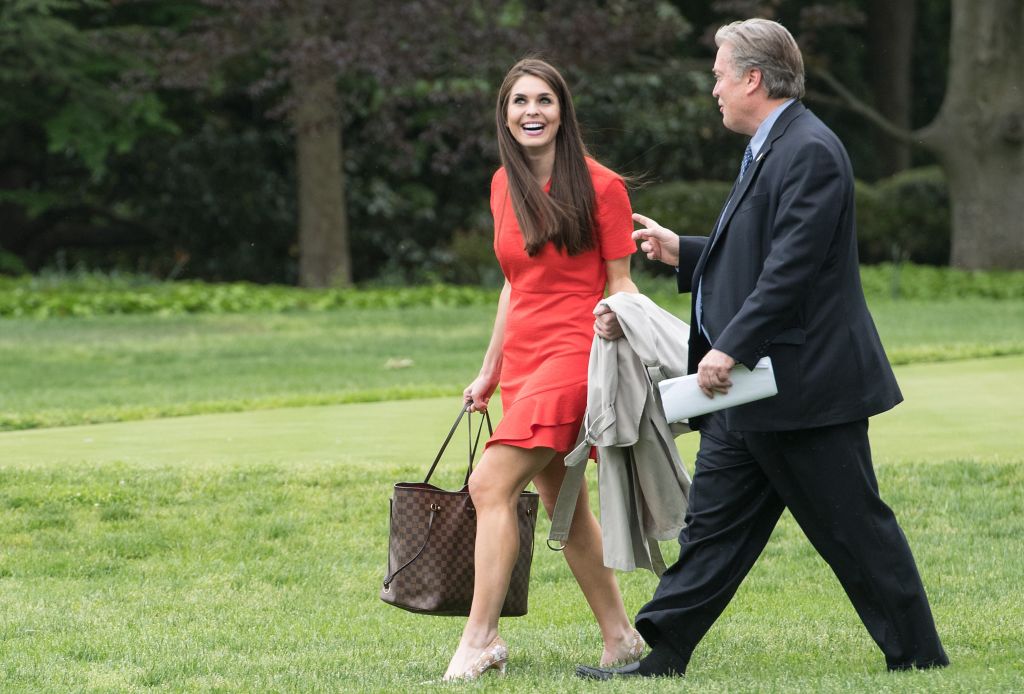 Could she be working on a book? | Nicholas Kamm/AFP/Getty Images

During a 2016 interview with Forbes, Hicks hinted at a possible book sometime in the future. It seems like this could happen sooner rather than later. She has been contacted by book publishers and film producers since her announcement, according to the Daily Mail. A White House insider told the publication that Hicks has been keeping a diary of her work at the White House and her interactions with Donald Trump.

Next: A financial cushion 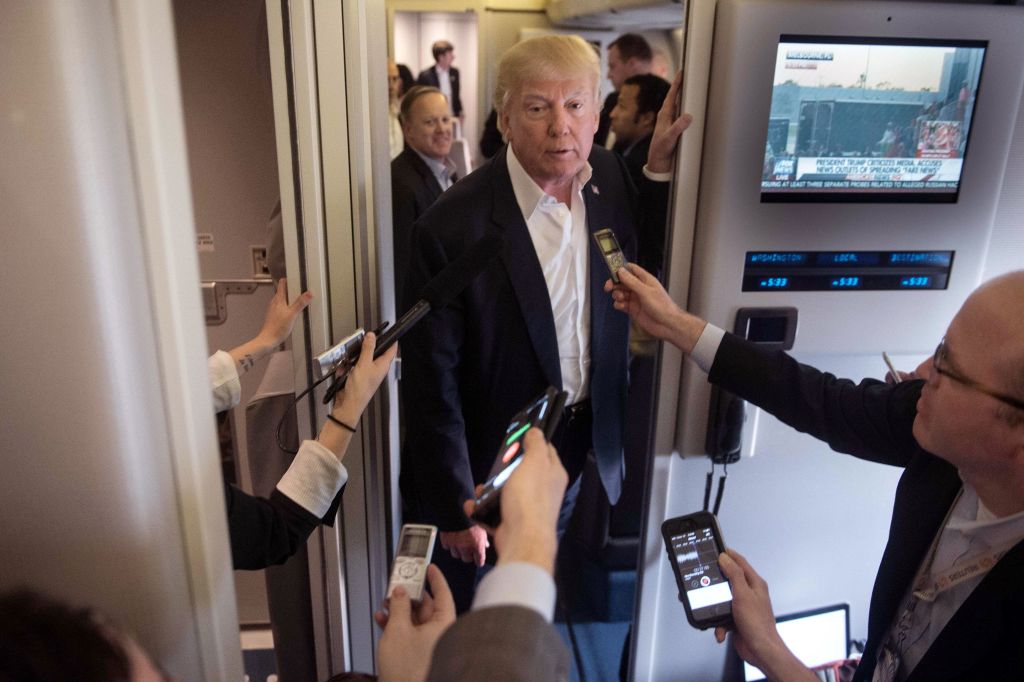 Her insight into the Trump White House is worth a fortune. | Nicholas Kamm/AFP/Getty Images

If Hicks decides to proceed with a tell-all, she could get a big payday. New York literary agent Eric Myers told Daily Mail that Hicks would have no problem getting a $10 million advance if she agreed to spill the beans about Trump and what goes on behind White House doors. This would help bolster her current net worth, which is estimated to be roughly $200,000, reports Town & Country.

Next: Mixing business and pleasure 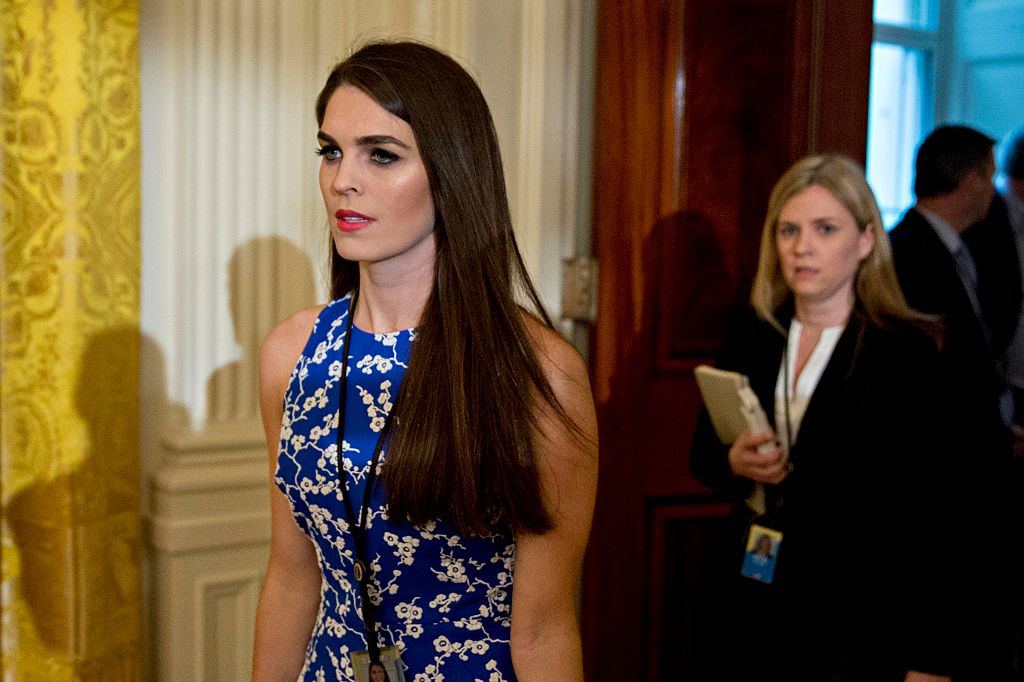 Her alleged affair was an open secret. | Andrew Harrer-Pool/Getty Images

Hicks’ alleged relationship with former Trump campaign manager Corey Lewandowski has recently received a lot of attention. This is because former White House aide Sam Nunberg went on CNN and claimed Lewandowski and Hicks were having an affair. Fire and Fury author Michael Wolff also alludes to an affair between the former co-workers in his book. Wolff claims Trump said Hicks is the “best piece of tail [Lewandowski will] ever have.”

A screaming match with her co-worker

We all get angry with our co-workers from time to time, but it rarely results in a public altercation. Hicks got some unwanted attention back in 2016 when she was spotted engaging in a screaming match with Lewandowski, reports The New York Post. They were seen on a Manhattan street yelling at each other as people walked by.

No one seems to know what the screaming match was about, but considering the affair allegations, it could have been a lover’s quarrel. A witness told the newspaper, “Hope was screaming at Corey, ‘I am done with you!’ It was ugly. She was doubled over with her fists clenched. He stood there looking shocked with his hands on his head.”

Next: Too much pressure

The glare of the spotlight became too much 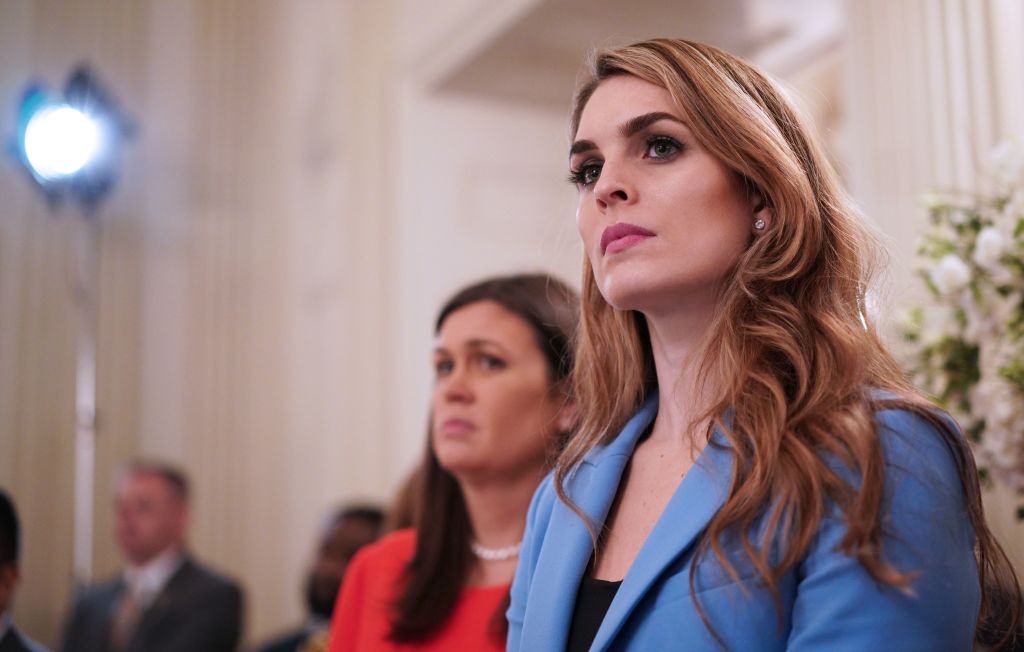 One thing many found ironic was that Hicks was in a public role but did not like to speak publicly. Several reports note how hard she tried to avoid speaking in public, even when the topic was about her or directly involved her. This proved frustrating for those questioning her during the House Intelligence Committee meeting. When it came to the panel’s Russia investigation she refused to answer questions about her time in the White House, reports CNN.

Also, during an interview with GQ, Hicks told the interviewer she could only speak about Hicks to Donald Trump while Hicks was sitting in the same room. “She declined my request to talk. Instead, she arranged something more surreal: I could talk about her with Donald Trump, in front of her,” said GQ reporter Olivia Nuzzi. 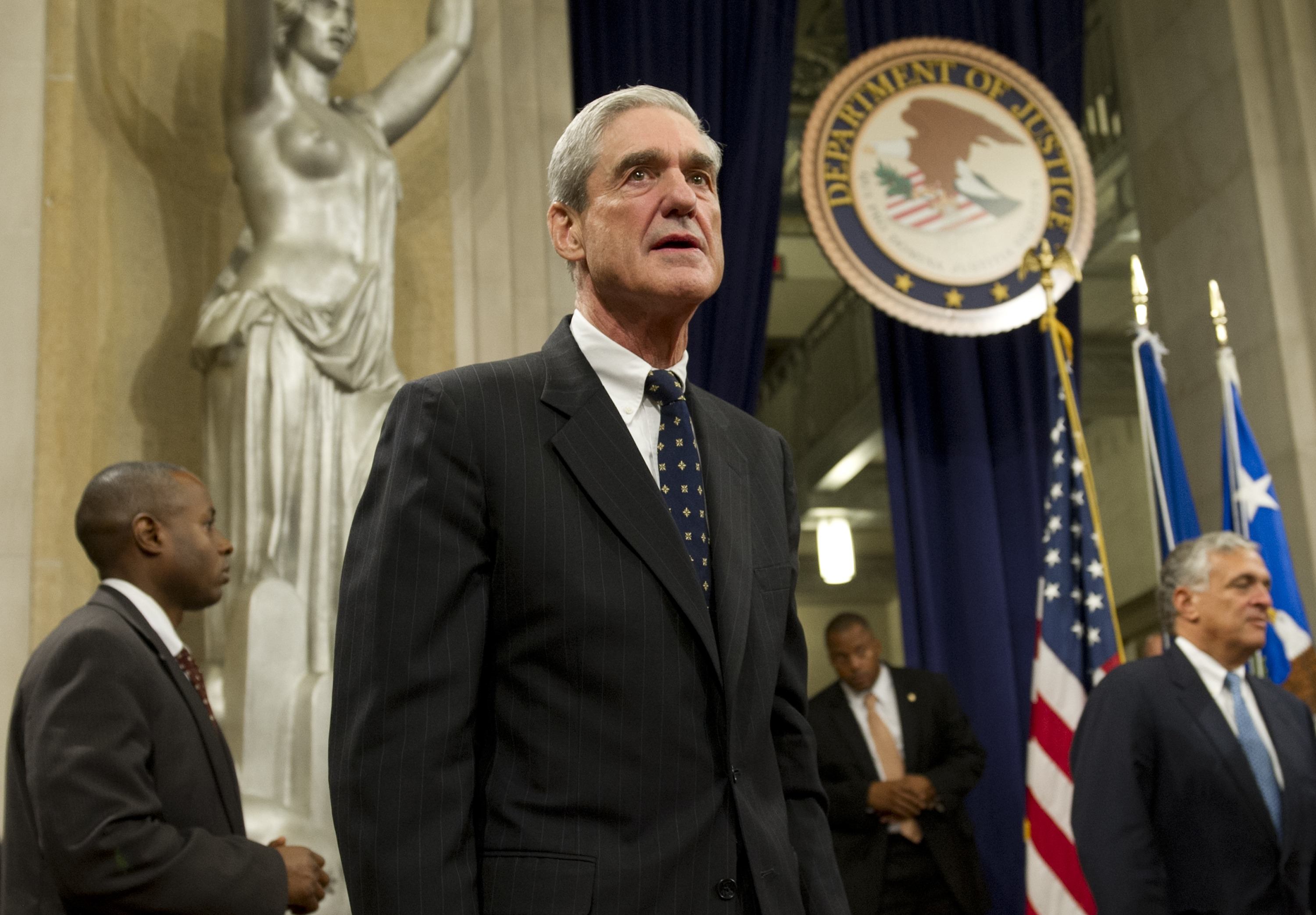 Hicks may be tangled up in the Mueller investigation. | Saul Loeb/AFP/Getty Images

Sources told Vanity Fair Hicks is suffering personally as a result of her time in the White House. Her job has resulted in not only emotional but also financial stress, say White House insiders. The combination of dealing with rising legal fees and the unrelenting interest in her personal life has left her overwhelmed.

“She’s in immense personal jeopardy,” a source close to the White House told Vanity Fair. “This is a sign the Mueller investigation is a lot more serious than any one of us thought.” 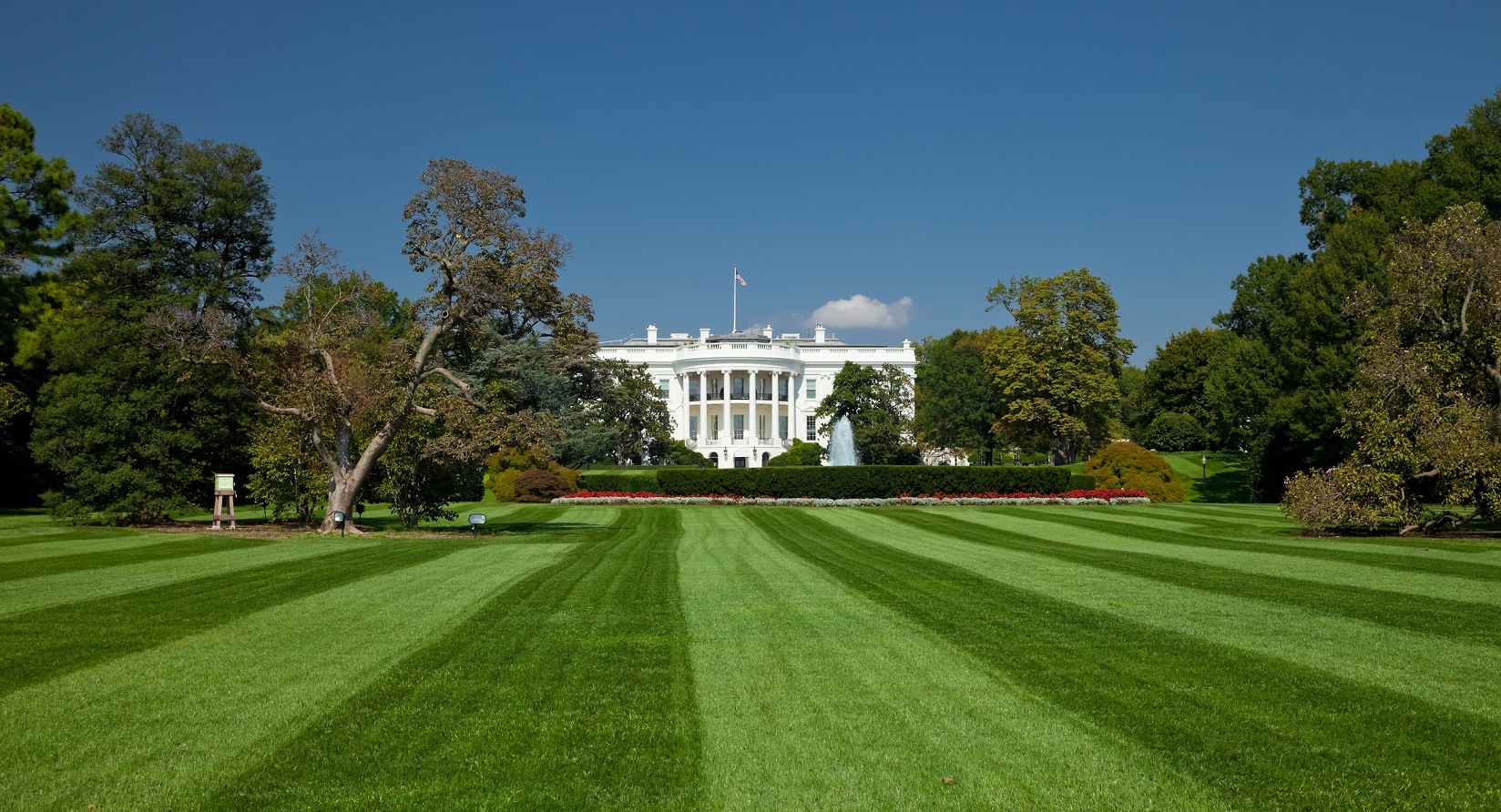 Next: Here’s the one thing that surprised us most.

This is the 1 thing that surprised us most 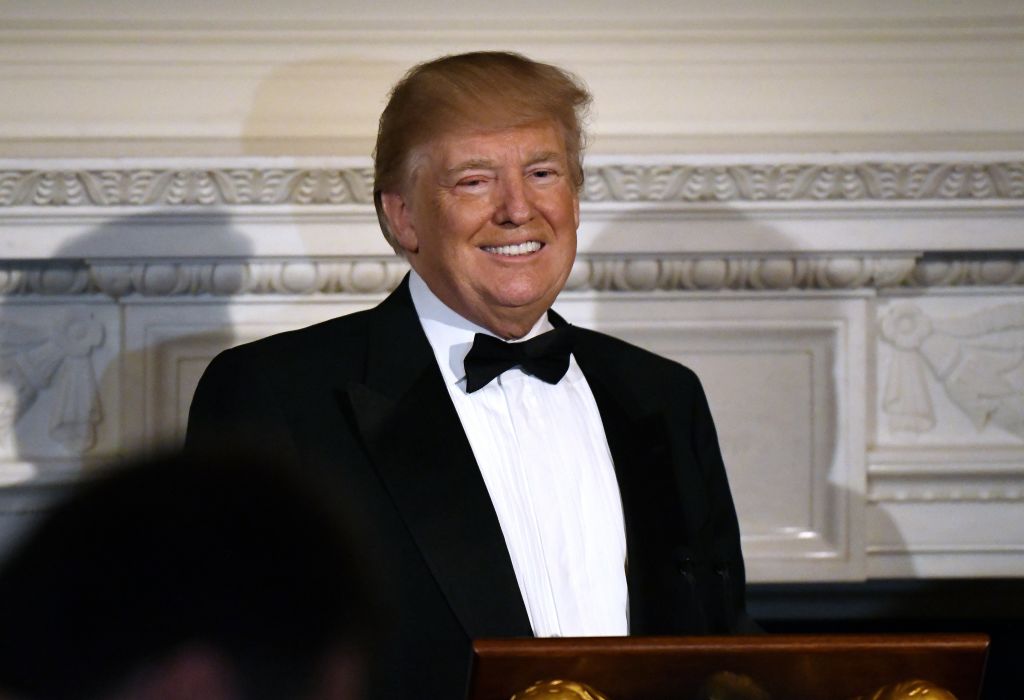 She’s yet to say anything negative about Trump. | Pool/Getty Images

Despite some surprising moments in her White House career, one thing is most surprising: Hicks didn’t have anything bad to say about Donald Trump. Her behavior is a stark contrast to some who have worked with the president (and many who haven’t). Perhaps it was her smartest move of all. Trump might be challenging to work with, but Hicks made sure to follow an important rule when it comes to leaving a job: Don’t burn bridges.

For now, she’s guarding his secrets, despite phone calls from publishers and movie producers. We’ll just have to wait and see if her loyalty pays off.