Pepsi vs. Coca-Cola: What’s Your Stock of Choice?

Both PepsiCo. (NYSE:PEP) and Coca-Cola (NYSE:KO) have been solid long-term investments over the past several decades, and both have become global leaders in the beverage industry. Furthermore, they both have shareholder-friendly policies: they pay dividends and raise them annually, and they repurchase their own shares, so that each share represents a larger portion of the company. But which one should you own?

A simple look at each company’s financial metrics makes Pepsi the clear winner. Pepsi has been growing its business more recently, whereas Coke has seen its growth stagnate. In the first quarter Pepsi’s sales were essentially flat, whereas Coke’s sales fell nearly 5 percent. Since both companies get most of their sales outside the United States, this weakness can somewhat be attributed to the strong dollar, since foreign currencies – emerging market currencies, in particular – have been weak. While Pepsi didn’t see a decline in its sales, it should be commended given its Russian exposure and the relative weakness of Russia’s ruble.

If we look at earnings, Pepsi was able to grow its net income by 13 percent, whereas Coke’s net income fell by 7.5 percent.

Despite Pepsi’s clear advantage in terms of growth, it is also a cheaper stock on a price-to-earnings basis. Pepsi trades at 19.4 times earnings, whereas Coke trades at 21.7 times earnings. Both are a bit pricey, but considering Pepsi’s recent growth, it looks a lot cheaper than Coke. 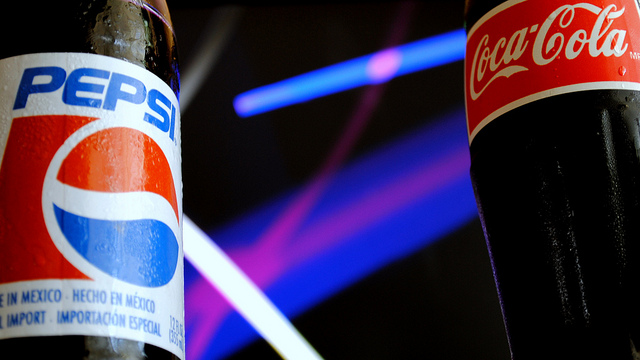 Nevertheless, I would hesitate to just jump into Pepsi shares at the moment. Before buying Pepsi stock, investors need to be aware of a couple of aspects of its business that I think make it less appealing than Coke.

First, Pepsi has a large snack business, whereas Coke is strictly beverages. This means that Pepsi has higher exposure to agricultural commodities, and corn in particular. That isn’t to say that Coke products don’t have corn exposure as well – keep in mind that corn is a crucial ingredient in Coca-Cola in the form of corn syrup. However, Pepsi produces packaged foods, most of which contain corn. If those products don’t contain corn, they almost certainly contain other grains.

While corn and grain prices have been strong this year, they have been down year over year, and to some extent this is the reason that Pepsi was able to grow its profit margins significantly.

Second, Pepsi owns its bottling and distribution companies, while Coke does not. Coke sources this business out to several regional companies, and many of these companies are publicly traded. Coke sells a highly concentrated version of its patented formula to these factories, who must supply the sugar, corn, water, and other ingredients that go into Coke’s products. Thus, when commodity prices rise, the bottling companies have to absorb the costs.

However, there is still the issue of valuation: Coke is about 10 percent more expensive than Pepsi on a price-to-earnings basis, and so no matter what your thoughts on commodity prices, Pepsi may still be the better bet. This is especially true given that Pepsi won’t stand idly by if its margins start to tighten in the face of higher commodity prices. It, too, may outsource its bottling business, or it may also decide to spin off some of its commodity-heavy brands.

Ultimately, it is a tough decision. The best route may simply be to buy a little of each — but I wouldn’t do so right now. Pepsi offers better value, but I would rather wait for a pullback in both companies to around 17 times earnings.

Disclosure: Ben Kramer-Miller has no position in Coca-Cola or in PepsiCo.