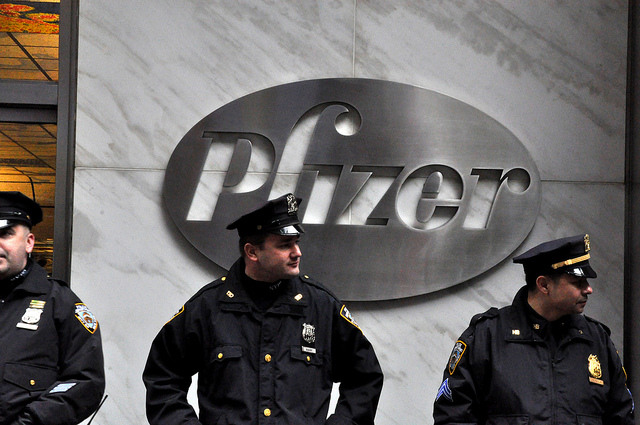 Pfizer (NYSE:PFE) is a great pharmaceutical/biotech company. Pfizer is one of my portfolio holdings devoted to health care. It is among the largest research and development based companies in America. There is once concern that still has me on edge and that has to do with a management shakeup that could be a prelude to a larger change coming for Pfizer. While the company has had its ups and downs, it remains a reliable stock.

Aside from a necessary cut to the dividend in 2009, which was the result of some acquisition activity and a generally rough time period for businesses in general, the stock has been reliable. Why? Because it is a dividend machine as the company has paid dividends every single quarter for 75 years. To make matter more exciting, the dividend has been increased once again, and will now be 26 cents per share for the first quarter distribution, an 8 percent hike.

This will be the 301st dividend paid by Pfizer. So, the company, having regained its footing, is working toward an ever better distribution, and has the growth to support it. Further, Pfizer is flush with cash on its balance sheet, having over $30 billion on hand. The company has a lot of options with that kind of cash. I own the company because I enjoy the 3.5 percent yield and reinvesting the payments in the company to compound my money. So why am I writing this piece?

We recently learned that Pfizer and Amy Schulman are parting ways. As someone who follows the industry I was really surprise because she was all but being groomed to take over the Vaccines, Oncology, and Consumer Health Care Division of Pfizer. Not only is she not getting the position, she is leaving the company altogether. As stated in the SEC Filing on the matter: “By mutual agreement, Amy Schulman steps down,” and “Amy Schulman and Pfizer have agreed to separate.” Finally, it also states that the company wished to “thank Amy for the past 5 years of hard work” and good luck “in her future endeavors.”

So who did Pfizer ultimately choose instead of Schulman? Management has nominated Albert Bourla, a 20-year Pfizer employee. Susan Silbermann, who worked in Pfizer’s specialty care business, will replace Bourla. This shakeup suggests to me that there is infighting among management right now. Will it affect the business? I don’t think so, at least not yet. What we need to be prepared for is if there are more of these surprises. Maybe Schulman caught wind of a larger issue brewing (a potential breakup?) and decided to leave.

Potential Breakup of the Company?

To me, this suggests that all is not well among the management team under Chairman and CEO Ian Read. I wouldn’t be surprised to see Amy Schulman employed at large competitor here in 2014 as she has a lot to offer. Analysts that I speak to that are much more familiar with Pfizer than I am and they are of the opinion that the upcoming Pfizer internal split will lead to an actual breakup of the company into multiple parts.

That would be a massive undertaking but is certainly not outside the realm of possibility. How is the Street reacting to the news? Well, it is not. In fact, most investors do not know what to make of the situation. Volume has spiked a bit in the weeks following the news, barring right around the holidays, but the share price has been relatively stable. At this point, we do not know but with upcoming divisional splits at the company, it is completely possible. What is known is that as a shareholder, or someone trading this stock, we need to be cognizant of more changes in management because a similar announcement to the departure of Schulman could send the stock lower. The Street likes stability and only likes surprised when they are to the upside.

As we enter 2014, there is certainly something brewing at the company. There is no need to panic, but we need to be aware of the situation. Anyone who has done their homework on the company knows that the departure of Schulman is a surprise. Some analysts I speak with are speculating about a break-up of the company’ major divisions. However, at this time we have a share price of $30.50 with low volatility, a dividend that is being increased and a nice yield.

I recommend holding the stock and waiting until we have more clarity on what is happening with management. The company just raised its dividend and has a ton of cash. It is taking steps in the right direction. We just need to ensure the story behind Pfizer doesn’t change and look for 1) further changes in higher level management and 2) any signs the company will break into different parts.