Pharma Bro: The Rise and $7.4 Million Fall of Martin Shkreli

Why does nearly everyone who’s heard of Martin Shkreli hate him? If you look at how the young “Pharma Bro” operated in the public sphere, you start to get the picture. Specifically, Shkreli:

Flash forward to 2018, when Shkreli cried upon learning he was going to jail, and all people could do was laugh and cheer. Yet this chapter, which includes $7.4 million in forfeited assets and a seven-year prison sentence, comes at the end of a remarkable story.

Here’s a look at how the son of an immigrant doorman amassed $70 million in wealth — then became a federal prison inmate — all by the age of 34.

He had a pretty modest childhood. | Drew Angerer/Getty Images

A 2016 Vanity Fair profile shows just how modestly Shkreli spent his childhood in Brooklyn. His parents were both Albanian immigrants who held jobs as janitors, while his father also worked as a doorman.

After enrolling at a Manhattan high school for gifted students, Shkreli dropped out and landed an internship at the hedge fund of CNBC’s Jim Cramer at 17. There, he began absorbing information about stock manipulation and biotech scams.

Next: After Cramer, Shkreli’s own hedge fund and a clash with Lehman Brothers

He started a hedge fund at the age of 23. | Brendan Smialowski/AFP/Getty Images

After learning the ropes at Cramer’s  company and a few other firms, Shkreli managed to start his own hedge fund at the age of 23. By the following year (2007), Shkreli made a bet exceeding $2.5 million that the market would tank.

Instead, Shkreli’s fund tanked, and Lehman Brothers (which had taken his bet) wanted its money. However, even though Lehman successfully sued Shkreli, the financial firm collapsed in 2008, making it unable to collect.

According to Vanity Fair, Shkreli moved back into his parents’ home, a defeated young man. But he’d escaped further disgrace.

Next: His second hedge fund’s the charm. 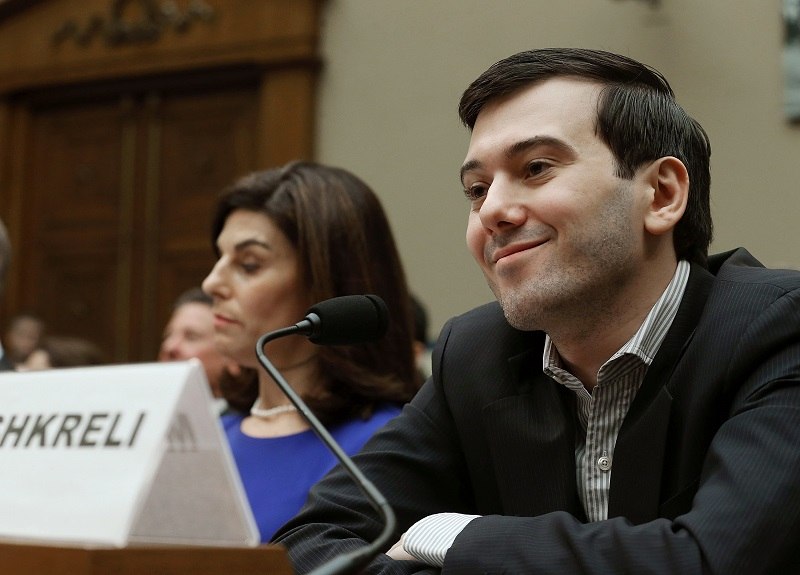 There was serious manipulation going on. | Mark Wilson/Getty Images

With Lehman gone and America bracing itself during the Great Recession, Shkreli founded MSMB, another hedge fund. This time around, he and his partners were even better at shorting stocks — and bolder in their tactics.

Success there led to a shift toward pharmaceuticals and a company called Retrophin, which Shkreli opened in 2012 after attracting investors. However, federal investigators saw repeated lies and manipulation of Retrophin investors’ money.

Next: The mistakes that eventually brought the Pharma Bro down

4. Shkreli stops at nothing to get rich.

His plans were a straight up Ponzi scheme. | Spencer Platt/Getty Images

While pitching his new pharmaceutical company to investors, prosecutors said he had lost millions (perhaps tens of millions) while at MSMB. Later, when it came time to pay, Shkreli raided Retrophin’s cash stock and funneled the money back to them.

Call it a Ponzi scheme or old-fashioned Wall Street thievery, but in the end these crimes were the ones that brought Shkreli down, beginning with his 2015 arrest. Yet he was just about to become world-famous.

Next: Shkreli becomes the symbol of American greed (millennial edition).

He became the most hated man in America. | Kevin Hagen/Getty Images

Shkreli became a household name in the financial world at Retrophin, but as CEO at Turing Pharmaceuticals he became famous around the world. It happened in summer 2015, after he raised the price of the life-saving drug Daraprim from $13.50 to $750 per pill.

Shkreli, basically saying he did it because he can, then repeated his story on the cable news circuit but went mum on Capitol Hill, where Congress had asked him to testify. Already, he was being called the most hated man in America.

Next: Following his arrest, Shkreli becomes louder and bolder.

He started to lose it a little bit. | Spencer Platt/Getty Images

As CEO of Turing, Shkreli accumulated stock worth as much as $50 million in recent years, and his net worth exceeded $70 million. However, he lost his leadership position following the arrest, and his bail cost $5 million.

People also started noticing Shkreli’s obnoxious lifestyle and unusual purchases, including the only copy of a new Wu Tang Clan album in 2015. (He paid $2 million for it.)

By 2016, Shkreli was publicly sparring with Hillary Clinton over her threat to go after the pharmaceutical industry. He also became a Donald Trump supporter — one of the few Trump refused to accept. (Trump, who was born into millions, actually called Shkreli “spoiled.”)

Next: This outburst landed Shkreli in federal prison.

His tweets got him sent to jail to await his sentence. | Andrew Burton/Getty Images

Before his trial began in June 2017, Shkreli remained in the public eye, flaunting his supposedly fabulous life on Twitter. Jury selection was tricky, but eventually the trial lasted about six weeks, ending with a guilty verdict in August.

After the trial, Shkreli remained out on bail as he awaited sentencing. For some reason, the disgraced Pharma Bro was still fixated on Clinton, who had started a book tour in September.

“Will pay $5,000 per hair obtained from Hillary Clinton,” he wrote on Facebook. Once the judge learned of the post, she revoked his bail and Shkreli headed straight to federal prison, where he remained until the sentence came down in March 2018.

Next: The end came, but Shkreli is somehow still rich.

He cried, but he still gets to keep millions. | Brendan Smialowski/AFP/Getty Images

Upon learning of his seven-year sentence, Shkreli broke down and cried, but he’ll go away with the estimated net worth of $20 million, CNN reported. (Future lawsuits and the cost of appeals may deplete these reserves.)

Shkreli had to forfeit the Wu Tang album, a Picasso painting, and other assets totaling $7.36 million. He was found guilty of defrauding investors to the tune of $10 million, so the $75,000 fine he has to pay seemed light.

On the bright side, Shkreli did receive credit for the six months in jail he’d already served. Considering he’ll likely emerge from jail before he turns 40, it’s probably not the last we’ve heard of him.