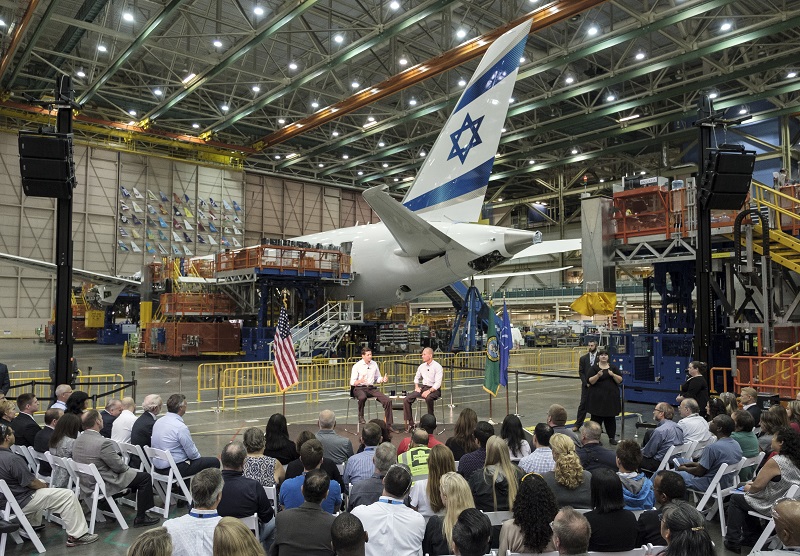 Paul Ryan, speaker of the House and the conservative movement’s intellectual darling, recently paid a visit to a Boeing plant in Everett, Washington. Everett is a medium-sized, working-class city just north of Seattle that’s been home to Boeing facilities for decades. In fact, the biggest building in the world — the Boeing Everett Factory — is the company’s crown jewel in the region.

But Ryan wasn’t there for a simple tour and to take in an AquaSox game. He was there to garner support for the Trump tax plan — a series of tax reforms Republicans claim will create jobs and spur the economy.

Right now, the details are sparse on what that plan would actually include. We know the Republican platform for a very long time has pushed for significant tax cuts for both corporations and individuals. And the basic idea is to free up money for wealthier people and employers, so they take that money and invest or spend it. Investing, in this case, means hiring more workers and buying more equipment for employers (a win-win for everyone), as well as spending money for individuals who will increase demand for goods and services. More demand? More jobs.

But the photo above, taken at the Boeing plant in Everett during Ryan’s visit, tells a larger story. While you see Ryan on stage with Boeing CEO Dennis Muilenburg, the devil is in the details. We’ll dig into the elements of the photo and what it means for Ryan, Donald Trump, the Trump tax plan, and the concept of tax reform in general.

Let’s take a quick look at why Ryan was there in the first place and what is means for you and America.

The Trump and ‘MAGA’ agenda

Paul Ryan had to convince the workers the tax plan would benefit them. | Stephen Brashear/Getty Images

We’re still waiting on the full details of the Trump tax reform plan, but we do have an outline. During Ryan’s visit, his job wasn’t just to convince Boeing execs and workers that tax reform would benefit them — many already agree — but that it would benefit Americans of all stripes. That includes all the workers in the room, both white- and blue-collar. It’s only one prong in Trump’s grand plan to “Make America Great Again,” and that includes freeing up corporate cash to hire more workers.

But Boeing and the state of Washington have a complicated past, and we’ll get to that. First, though, let’s address the main question everyone has about tax reform.

Next: Will the plan actually work?

The Trump tax plan: Will it work? 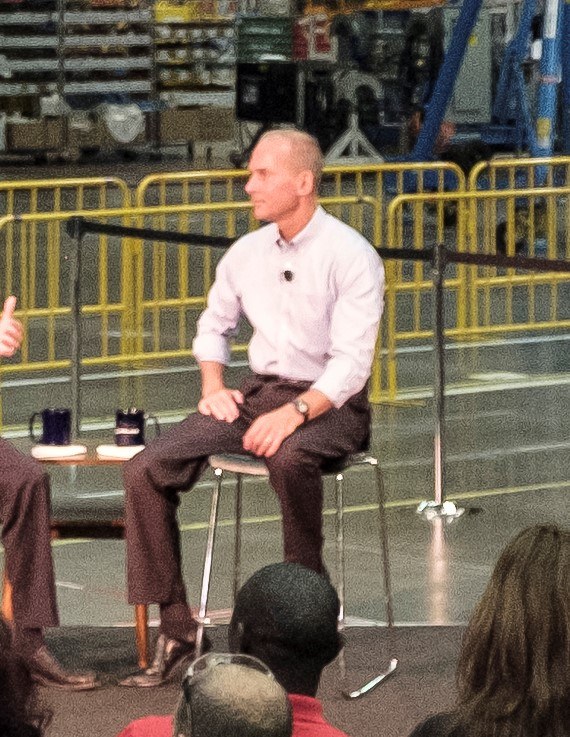 The CEO of Boeing received tax cuts for the business. | Stephen Brashear/Getty Images

Everything hinges on this one (well, maybe two) simple question: Will tax reform work? And, perhaps most significantly, can Republicans pass a new plan into law? We don’t know for sure, but we can look at what experts think and what experiments have wrought in the past.

Several analyses seem to think the Trump plan won’t work in that it won’t lead to increased economic growth. There are complicated reasons for this, but suffice it to say many think those who get the biggest tax breaks — wealthier individuals and corporations, typically — will stash the money and sit on it rather than invest or spend it. And a Tax Policy Center analysis says 20% of taxpayers will end up being worse off under the new plan than before. But for corporations and high earners? It should amount to a sweet deal.

We can’t forget about the recent tax experiment that took place in Kansas, either. Kansas Gov. Sam Brownback basically took this same plan and ran with it, slashing taxes to the bone. The result? Well, it wasn’t pretty. We can just leave it at that.

Next: How is Ryan supposed to sell this idea to the American people?

Selling tax reform to workers as ‘unrigging the economy’

In order to get people on board, Ryan needs to take a page from the MAGA playbook. Specifically, go back to rhetoric about the “rigged” economy and how it’s screwing everyday, hardworking people. For the middle class, who might not find tax cuts for millionaires and billionaires a very sexy idea, Republicans like Ryan have to appeal to their desires — namely, better jobs and higher pay.

That, Ryan will say, will be realized only after employers have more money — money they will keep as a result of tax breaks. The hard part is squaring the fact that there isn’t much evidence to back up what the Republicans are selling. That doesn’t mean it won’t work, of course, but it’s an uphill battle.

And getting back to the photo for a second, there’s one thing you don’t see: the laid-off and fired workers who have streamed out of Boeing factories for years now, even as Boeing has paid an effective tax rate well below the actual rate.

Next: If the company didn’t use the money to retain its workforce and hire more in the past, why would it in the future?

With the tax breaks Boeing was given, it still cut jobs. | Stephen Brashear/Getty Images

Recently Boeing has been the recipient of massive tax cuts on the state level. In fact, Washington gave Boeing the biggest corporate tax break ever. At the time, the deal was that Boeing would get its tax breaks and keep jobs in Washington. As you can imagine, it didn’t pan out as planned.

Instead, Boeing took the money and ran. It has reduced its workforce in Washington by 15% since receiving the tax breaks and let go of around 13,000 workers. So, if you see some skeptical faces in Ryan’s crowd from our photo, that’s a big reason why.

Next: A question of whether this type of plan would work nationwide is justifiably at the forefront of their minds. 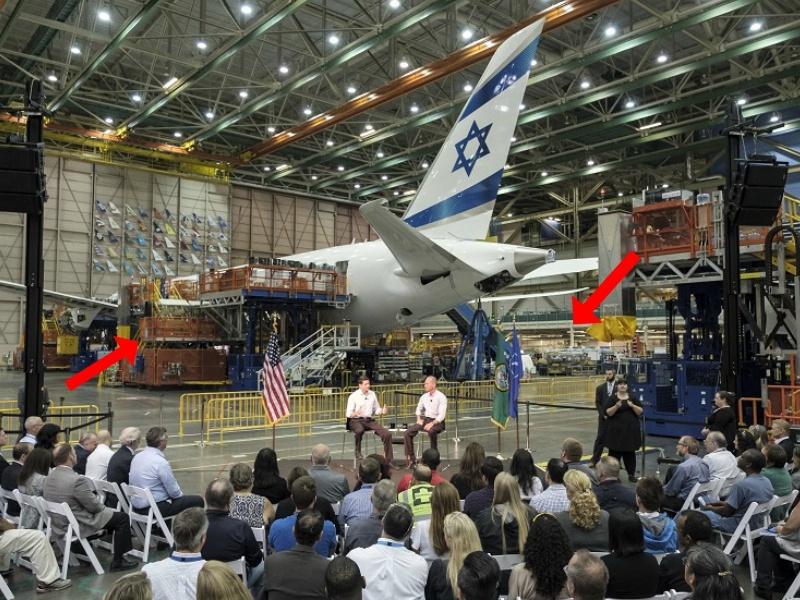 While we can’t expect every employer to act like Boeing did in Washington, we can expect corporations to act in their own self-interest. Politicians may want to use tax incentives (cuts) to get employers to hire more people and raise wages, but in reality it’s a different story. You end up with what happened in Kansas. Sure, there will be investments, but they might be in automation and technologies that help make business processes cheaper and more efficient. That’s good news if you’re a corporation, but bad news if you’re Joe Sixpack.

On CNBC a few months ago, AT&T CEO Randall Stephenson pushed for corporate tax breaks by saying 7,000 jobs are created for every $1 billion in tax savings. But as a New York Times writer points out, an analysis showed AT&T paid only 8% in taxes between 2008 and 2015 and actively downsized its workforce. Where did all the money go? $34 billion went toward buying back company stock in order to boost the share price.

Next: Are Ryan and his Republican colleagues up to the task of selling the Trump tax plan to middle-class America? 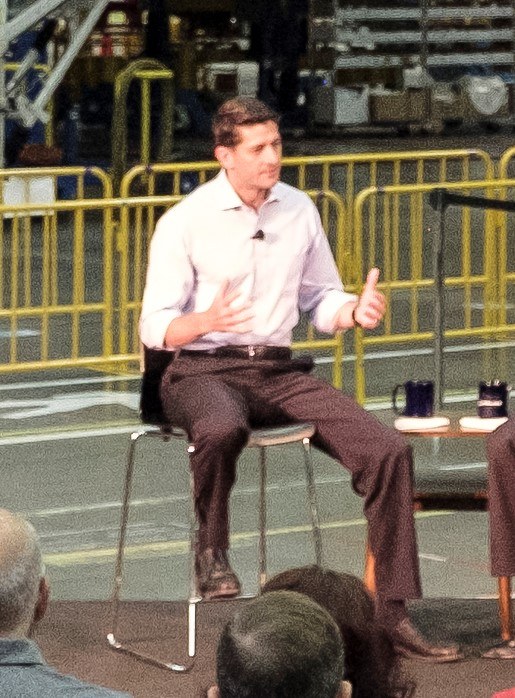 Suffice it to say, Ryan has his work cut out for him. Sitting in that room at the Boeing factory in Everett, he was facing a polarized audience. On one side, you have executives and white-collar managers who will easily buy into his rhetoric. On the other, you have the workers who have seen firsthand what happens when governments give in and hand out corporate tax breaks.

These are people who’ve been screwed. They’ve seen their co-workers and colleagues get laid off. And as all that has happened, they’ve seen stock prices soar and corporate profits reach new heights.

Next: History says this is going to be a tough sell.

Given Ryan (and Trump’s) history, tax reform will be a tough sell

Tax reform isn’t very popular. It’s going to be a tough fight. And given that Republicans were unable to pass their health care plan (despite years of promises and complete control of the government), passing the Trump tax plan might prove to be even more difficult than anticipated.

You also have to look at our two central figures, Trump and Ryan, and their histories with middle-class America. In Wisconsin, unions have been decimated. Job growth has fizzled, and the state ranked 33rd in 2016. And as for Trump? He has a long history of stiffing workers and reneging on contracts. He’s not exactly the type of character middle America would trust, despite what happened in November 2016.