Playing Tug-of-War With the Minimum Wage: Who Has a Better Grip?

Fast-food workers and their supporters held a day of protest on Thursday, walking out of work or taking to the streets in all 50 states in the pursuit of higher wages and better workplace conditions. The demonstrations are the latest in a series catalyzed in part by President Barack Obama’s call for a higher, inflation-indexed minimum wage in his 2013 Sate of the Union address.

In his speech, the president argued that “in the wealthiest nation on Earth, no one who works full-time should have to live in poverty.” He advocated an increase in the federal minimum wage from $7.25 per hour to $9 per hour, a move that could “mean the difference between groceries or the food bank; rent or eviction; scraping by or finally getting ahead. For businesses across the country, it would mean customers with more money in their pockets. And a whole lot of folks out there would probably need less help from government.”

This and similar thinking has been employed by advocacy groups on behalf of minimum- and low-wage workers. There has been a fairly intense, albeit slow burning, firestorm regarding the issue that has pretty much seeped into every nook and cranny of media, politics, and business. The president’s case and the plight of those unable to afford the cost of living — some 15.1 percent of Americans lived in poverty in 2010 — has stirred many liberal-leaning social thinkers to action, but a number of business leaders, economists, and fiscal conservatives argue that such a minimum-wage increase would at best be ineffective.

At worst, an indiscriminate increase in the minimum wage could end up hamstringing the economy, which now more than ever should be spared unnecessary shocks. Critics of the president’s proposal — or others, like a proposal being tossed around in Congress to increase the rate to $10.50 per hour, or the headline $15 hour rate most recently sought by protesters — make a fairly broad-based and convincing case: Logistically, such increases could actually fail to bring about the desired change.

First, to outline why there is such a massive movement in support of increasing the federal minimum wage, let’s take a look at some of the stats that contextualize the issue.

Demos, a research and policy center focused on economic stability, defines low-wage work as “a job paying $12 an hour or less, equivalent to an annual income of about $24,000 for a full-time worker.” Using this definition, employment figures from a National Employment Law Project report, and estimates of the share of low-wage workers at each business, Demos calculated that McDonald’s (NYSE:MCD) and Wal-Mart (NYSE:WMT) employ a combined 1.48 million people at a wage too low to support a family, afford health care, or save for retirement.

The poverty level guideline for a family of four in 2013 was $23,550 per year. The Economic Policiy Institute reports that the average person working in the fast food industry is 35 years old, many of whom have children. The average hourly earnings of these workers is $9 per hour, approximately $18,500 per year. 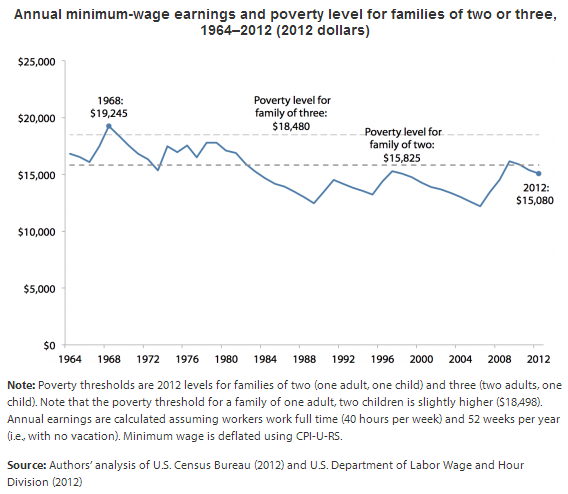 A survey conducted by Lake Research Partners found that a proposal to raise the federal minimum wage to $10 per hour and indexing it to inflation was supported by 73 percent of likely general election voters polled, while 20 percent opposed it. Support for the issue was 91 percent among Democrats, 74 percent among independents, and 50 percent among Republicans.

The issue seems to have broad-based bipartisan support largely because it feels like a social issue. It’s hard to find anybody who is unfeeling toward the hardships faced by minimum- and low-wage workers, particularly those with children. Calls to raise their quality of living often evokes visceral responses. However, the problem with these appeals — though well meaning — is that they can sometime displace reason.

But among the likely voters polled by Lake Research Partners, framing the minimum-wage issue as an economic boon versus as a social issue actually increases its appeal. The survey shows that when framed as an economic issue, 73 percent support it and 21 percent oppose, while 69 percent support and 22 percent oppose when framed as a populist issue. In addition to this, 56 percent believe that increasing the minimum wage would help the economy, while 21 percent say it would hurt the economy and 16 percent say it would have no impact. 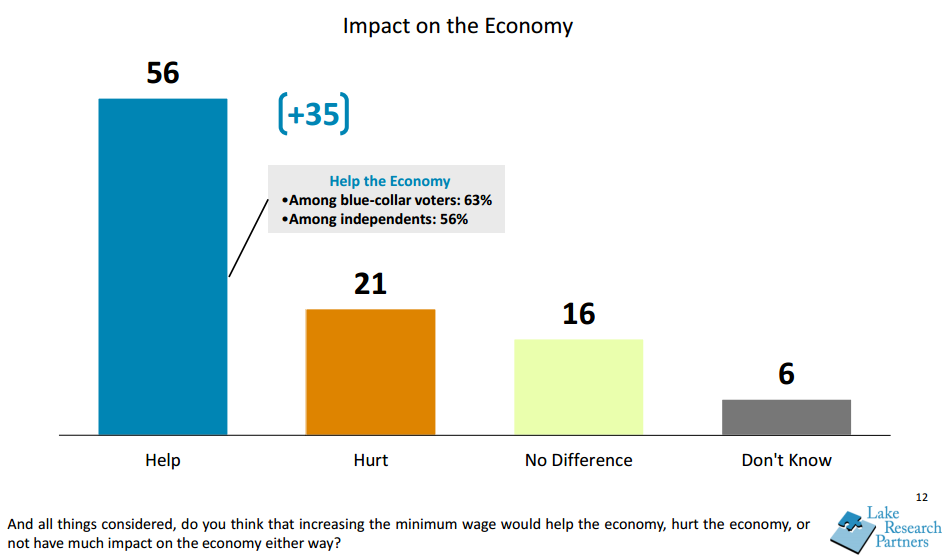 It’s important to keep in mind that the survey is simply a measure of what likely voters believe. While plenty of economists do support the claim that increasing the minimum wage would have a net positive impact on economic conditions, there are plenty opposed to the idea. Unfortunately, the entire field is as much voodoo magic as it is science, making the truth opaque. The entire economic machine is far to complex to predict long-term movements.

But this does not mean that the issue is not worth exploring. There are pros and cons, both sacrifices to be made and benefits to be gained by editing the federal laws that address wages. With study and time, more elegant solutions may emerge. For example, if the minimum-wage issue is fundamentally a problem with the difference between income and the cost of living, then it doesn’t make a huge amount of sense to simply increase the federal minimum wage. Cost of living is widely variable by geography.

The Massachusetts Institute of Technology developed a living wage calculator to highlight this issue. It’s intuitive, and the data back up the the idea that the cost of living in Rutland County, Vermont ($2,604 after taxes per month for a family of four), is much less than in Boston, Massachusetts ($3,260 after taxes per moth for a family of four). With this in mind, a federal mandate that requires states to address differences in the cost of living and the minimum wage may be more effective.

Additionally, the issue is often bent around large low- and minimum-wage employers like Wal-Mart and McDonald’s, but there are two reasons why this is not necessarily the best way to pursue a higher standard of living for those at the bottom of the wage scale. One is that the logistics of increasing wages at a company, all other things being equal, doesn’t really work. To boot, most strategies of “passing on the costs” or simply eroding earnings or reducing executive pay to compensate for increased wages are economically infeasible.