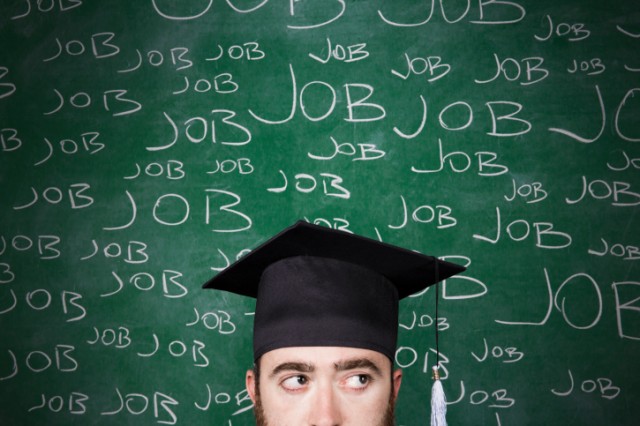 The U.S. labor market is facing a peculiar situation. The number of job openings has steadily climbed to the highest levels seen since 2007, which is great. But the demoralizing part is that hiring has not kept pace with the increase in the number of new jobs available.

The difference between job openings and hires is even more conspicuous when we look at the change over a year. The job openings growth rate has increased from 2.7 percent in 2013 to 3.2 percent in 2014. The rate of hiring has remained constant, at 3.4 percent, in the same period. The separations rate — which includes the rate of quits, discharges, and layoffs — has also remained largely steady over the last year.

This means that people joining the job market are likely being retained over a longer period of time because the pool of labor with the required skill sets is smaller. This may explain why the rate of hiring has not been as dynamic as the rate of increase in job openings, and points to a structural problem in the labor market: Namely, there is a mismatch between the skill sets that employers are looking for and the skill sets available in the market.

If we look at the sectors where the most hiring has happened in the last year, this trend becomes even clearer. Most hiring has happened in mining and logging and in the retail trade, but hiring declined in finance and insurance. According to a survey conducted by auditing firm PriceWaterhouseCooper early this year, nearly 30 percent of companies reported a lack of qualified workers as a growth barrier.

“We’re seeing a lot of demand for these skills particularly in the finance space, as companies deal with more and more reporting requirements, and need to make investments in technology to analyze data to help drive sales,” Ken Esch, the PriceWaterhouseCooper partner who headed the survey, told The Wall Street Journal.

One thing that should be kept in mind is that the data on job openings lags the unemployment data published by BLS by a month. According to the agency’s unemployment situation data, the economy added 288,000 jobs in June, and the unemployment rate has come down to 6.1 percent from 6.3 percent in May. There is a relatively stable improvement in the unemployment numbers.

The number of long-term unemployed (those jobless for 27 weeks or more) was down by 293,000 in June to 3.1 million. But there are still signs of underemployment, as the number of people employed part time for economic reasons — that is, people who are looking to work full time but cannot find such jobs — increased by 275,000 in June, to 7.5 million.