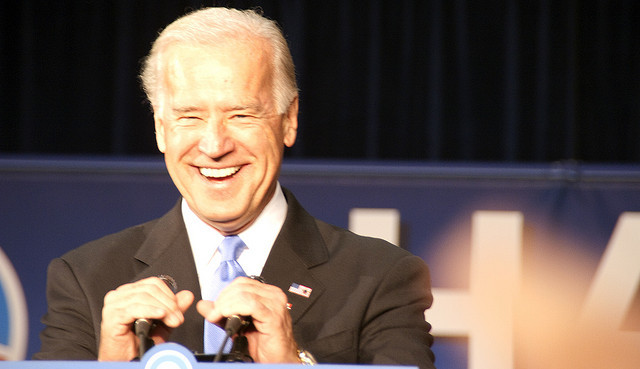 Vice President Joe Biden is about as much of a buddy as a top public official can be. He leads, in that nebulous way that vice presidents do, by adding a strong dose of personality to the political cocktail. He is as much a spectacle as he is a politician and has generally used the power of his office and character for good despite being, as NBC anchor Brian Williams once called him, a “gaffe machine” with “uncontrolled verbosity.”

Earlier this week, the media caught Biden in his element when he went to buy a few sandwiches for his weekly lunch with the president. Ordering four subs for a total of about $56, Biden found himself about $10 short of being able to pay the bill, and in front of all the cameras, he turned down an offer by the store owner to waive the charge for one of the sandwiches. Biden instead turned to an aide and asked to borrow the difference.

It’s not an act of heroism or even necessarily of leadership, but observers can still unpack the moment. In the clip below (which excludes footage of the purchase), Biden works the crowd outside the shop for a moment and, at the very end, answers a quick question while walking away.

“Mr. Vice President, do you support what the Senate is doing today on filibustering?” Biden was asked.

Dodging his reputation for verbosity and answering the question directly, he responded, “Yes, I do.”

The answer, seemingly offhand, was actually timely. On Thursday, when the question was asked, Senate Democrats led by Harry Reid (D-Nev.) moved to implement the “nuclear option,” which would alter the way judicial and agency confirmations are handled in the Senate. The measure would change the required number of votes to pass a confirmation from 60 to a simple majority of 51.

“The American people believe Congress is broken. The American people believe the Senate is broken. And I believe they are right. The need for change is so very, very obvious,” said Reid. This statement came in the wake of Republicans clogging the works for Obama’s Court of Appeals nominees for the District of Columbia Circuit. Republicans claim that new judges including Patricia Millett, Nina Pillard, and Robert Wilkins are unnecessary, though that is arguably not their true concern.

At present, the Court of Appeals is more strongly controlled by the Republican Party, with five of the six senior judges Republican nominees. The change that Reid is considering would make it so that only 51 votes are required to end a filibuster, instead of the 60 votes needed at present. The Senate sits at a 55 to 45 split between Democrats and Republicans, respectively, meaning that should the change be enacted, any filibuster would likely cease quite quickly.