Pope Francis: Is He a Marxist or Just a Good Christian? 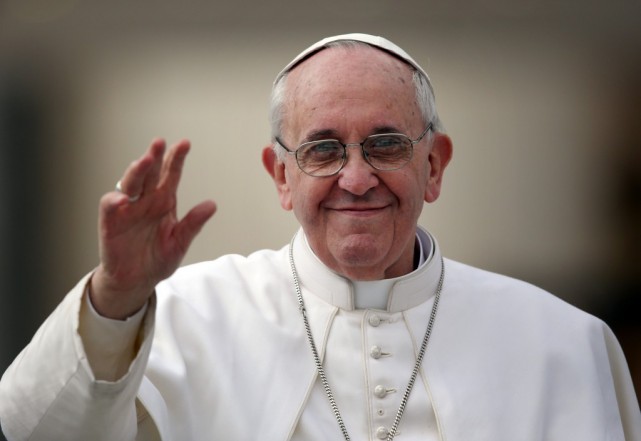 When you imagine a political radical or famous revolutionary, who do you think of?

Maybe you think of Che Guevera or Vladimir Lenin. Or perhaps you think of peaceful revolutionaries like Mahatma Gandhi or Martin Luther King Jr. Maybe, given the recent Scottish referendum, you think of independence fighters like William Wallace.

Whomever you imagine, chances are pretty good that Pope Francis is nowhere in the picture.

Yet in his short time as pope, Francis has already cause quite a stir. Most notably, last year he was accused of being a Marxist and a socialist, primarily by right-wing American radio host Rush Limbaugh (surprised?). Limbaugh has called the Pope’s economics “pure Marxism,” and even gone so far as to say that Francis has gone “beyond Catholicism” and is being “purely political.” Meanwhile, Pope Francis insists that he is simply keeping true to the church’s social doctrine.

And while it’s not exactly big news for Limbaugh to accuse anyone of Marxist ideals, he’s not the only one who seems to think that the novice Pope’s rhetoric smacks of Marxist or socialist tendencies. Months after Limbaugh’s attack, an Economist blogger claimed that the Pope “seems to be taking an ultra-radical line: one that consciously or unconsciously follows Vladimir Lenin in his diagnosis of capitalism and imperialism as the main reason why world war broke out a century ago.” Later, the writer compared Francis to a “little boy who observes the emperor’s nakedness.”

Most of the accusations surrounding Pope Francis’s ideals stem from the publication of Francis’s apostolic exhortation Evangelii Gaudium, in which he denounced the theory of trickle-down economics and advocated for a redistribution of wealth. Francis responded to the criticisms, saying: “The promise was that when the glass was full, it would overflow, benefiting the poor. But what happens instead, is that when the glass is full, it magically gets bigger; nothing ever comes out for the poor. This was only in reference to a specific theory. I was not, I repeat, speaking from a technical point of view but according to the church’s social doctrine. This does not mean being a Marxist.”

He later added, “Marxist ideology is wrong … but in my life I’ve known many Marxists who are good people, so I don’t feel offended,” according to Reuters.

Yet perhaps most interesting is the most recent way in which Francis addressed the accusations of Marxist leanings. In his response to those who would call him “ultra-radical” or a Marxist, Pope Francis has replied by pointing out that Christianity’s concern for the poor was a fundamental part of the religion before Karl Marx, or indeed, the Marxist ideology ever existed. “I can only say that the communists have stolen our flag. The flag of the poor is Christian. Poverty is at the center of the Gospel. … Communists say that all this is communism. Sure, 20 centuries later. So when they speak, one can say to them, ‘But then you are Christian,’ ” Francis said last year, per Reuters.

He added in a similar speech: “Today we have to say ‘thou shalt not’ to an economy of exclusion and inequality. Such an economy kills. … I beg the Lord to grant us more politicians who are genuinely disturbed by the state of society, the people, the lives of the poor.”

The Week notes that the mistake Limbaugh and other critics are making is that of conflating secular politics with religion; further, it’s an interesting reflection of our own society that simply expressing an interest in seeking justice for the poor — and a skepticism of trickle-down economics — is immediately considered a communist idea.

After all, the Bible contains about 300 verses on the poor and social justice. Considering that the Pope is a spiritual leader first and foremost, it would make sense that he would make the plight of the poor one of his primary focuses and objectives.

Further, Pope Francis, who has been praised for his adept leadership skills, almost akin to a CEO, has partnered with a number of Catholic business leaders to improve the efficiency of the Vatican since taking on the papacy, making claims that he is a Marxist appear to fall flat. It seems clear that Pope Francis is a shrewd leader, but he doesn’t seem bent on overthrowing the capitalist status quo anytime soon.