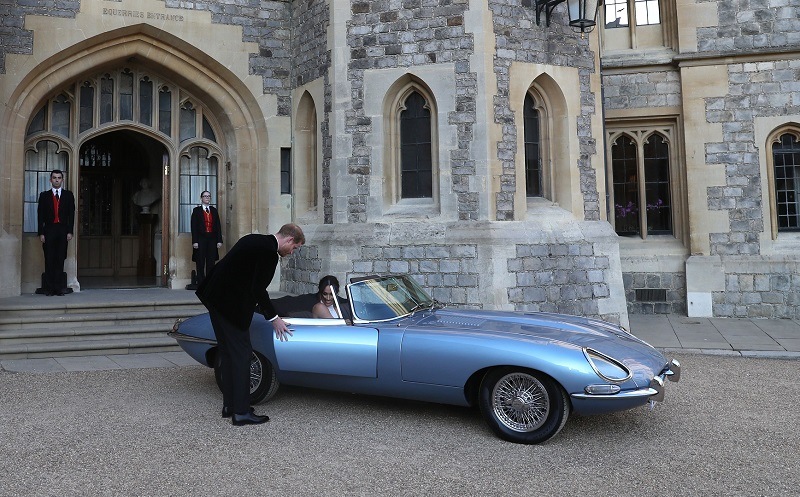 At Prince Harry and Meghan Markle’s wedding, the public saw one of the royal family’s greatest cars. | Steve Parsons/AFP/Getty Images

As weddings go, you couldn’t ask for much more than Prince Harry and Meghan Markle’s nuptials on May 19, 2018. The production was as extravagant as everyone expected, all the way down to the car the couple drove off in together.

That blue vintage Jaguar, which had been converted to run on electric power, provided the perfect exit for a royal couple. However, that’s only a taste of what’s inside the royal garages. Here are nine other show-stopping vehicles we’ve seen British royalty (including the queen) driving in recent years. 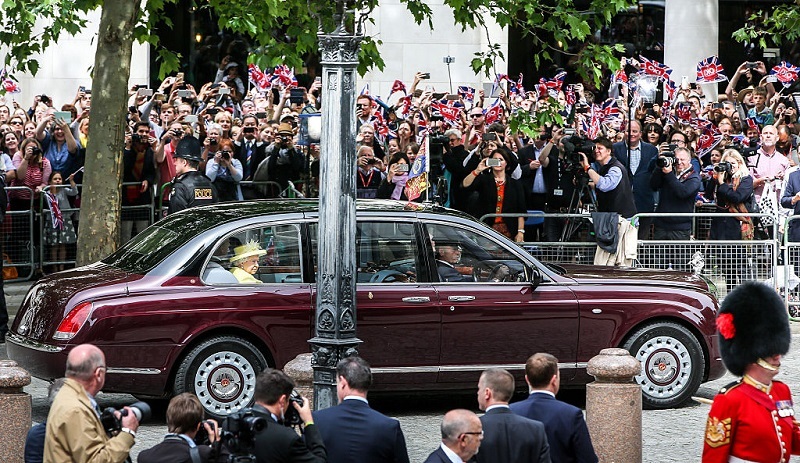 To celebrate the 50th anniversary of Queen Elizabeth’s accession to the throne (in 2002), Bentley created a custom version of the Arnage worthy of royalty. This “state limousine” features a longer wheelbase, wider cabin, and higher roof than any other model Bentley ever made.

For maximum visibility, Bentley also added more glass than it had in previous versions, and designed the back seat using a model of the queen.

Next: The British brand Land Rover has always supplied vehicles for the royal family. 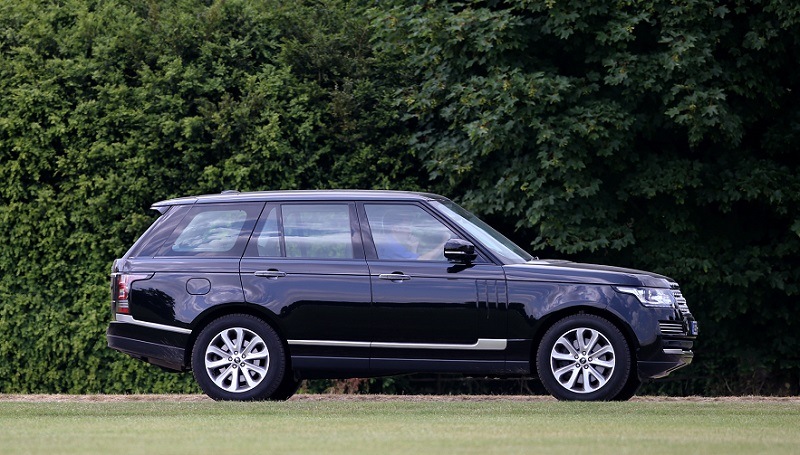 If you regularly tour the British countryside, a smart SUV would be one of the vehicles you need in your garage. Prince William’s had that in the Range Rover Vogue SE, one of the brand’s range-topping all-wheel-drive models.

In 2016, William and Kate decided to auction this diesel model off for charity, with the reserve set at $98,000.

Next: Prince Charles has always been a fan of Aston Martins. 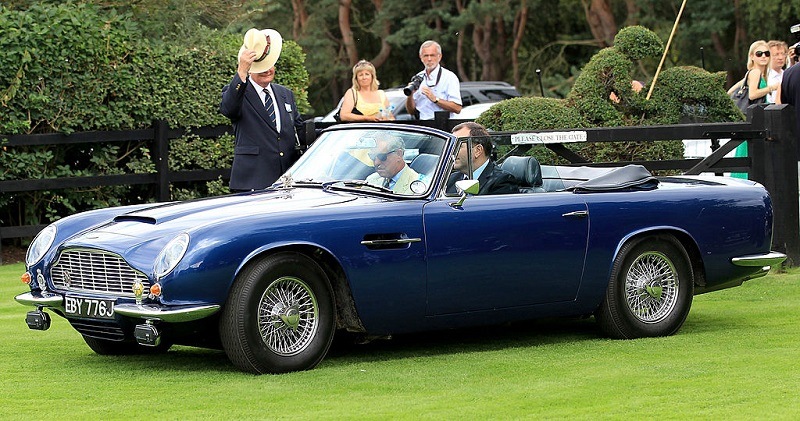 When Prince Charles turned 21, Queen Elizabeth got him an exquisite birthday present: An Aston Martin DB6 MKII in Seychelles Blue. You will see Charles behind the wheel of this, his favorite car, in photos from the past decades, and it’s the vehicle he loaned to Prince William and Kate Middleton for their wedding. 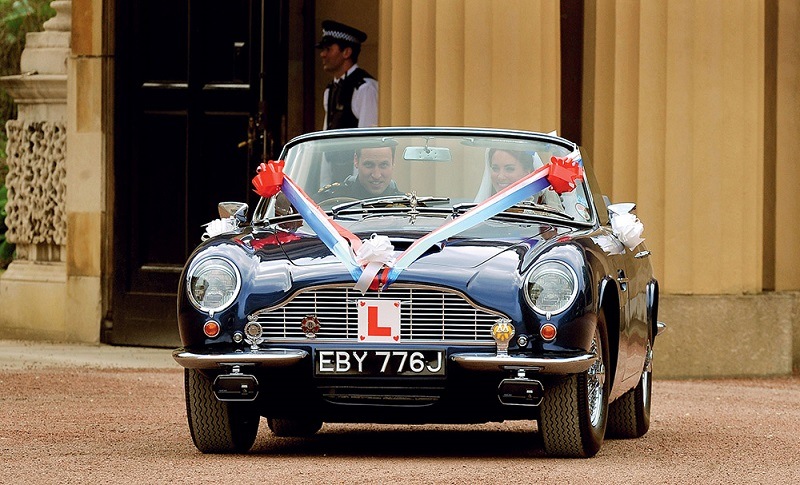 William and Kate’s wedding car was an eco-friendly loaner from dad. | Aston Martin

However, by that time the car no longer ran on gasoline. To answer critics of his environmental activism, Prince Charles had his beloved DB6 modified to run on discarded wine from British producers. Aston’s engineers were happy to retool the engine in order to keep it on the road, and Charles was overjoyed to see his son drive off in it on his wedding day.

Next: The queen always liked to drive her Jaguar around town. 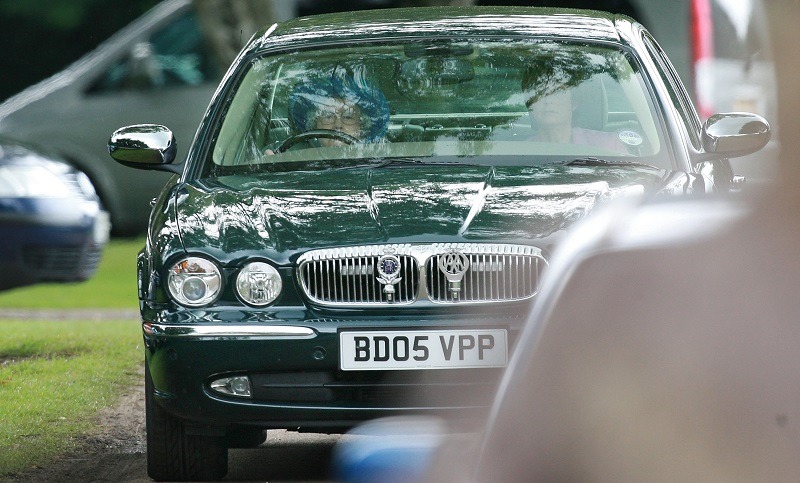 You could say the Jaguar X-Type Sovereign Estate (circa 2007) is the perfect car for a Sunday drive, and Queen Elizabeth certainly thought so. This iconic shot of her driving to the Windsor Cup Final was just one instance when she was snapped behind the wheel of her wagon.

Next: No royal garage is complete without a Rolls Royce fleet. 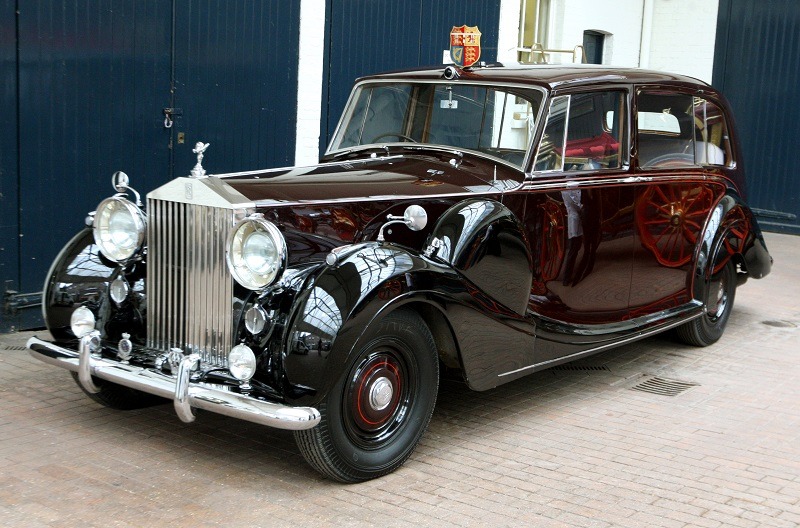 A Rolls-Royce state car at the Royal Mews on March 21, 2011 in London, England. The car would transport Prince Charles and Camilla on the day of the wedding of Prince William and Kate Middleton. | Dominic Lipinski/WPA Pool/Getty Images

While the queen’s 50th anniversary as monarch brought a Bentley state limo, her 25th year on the throne set the precedent. On that occasion in 1977, the British auto trade group gave Elizabeth a Rolls-Royce Phantom VI.

Though it dates back over 40 years, you could still see this vehicle in service as recently a 2011, when William and Kate got married.

Next: In his bachelor days, Prince Harry preferred this hot Audi. 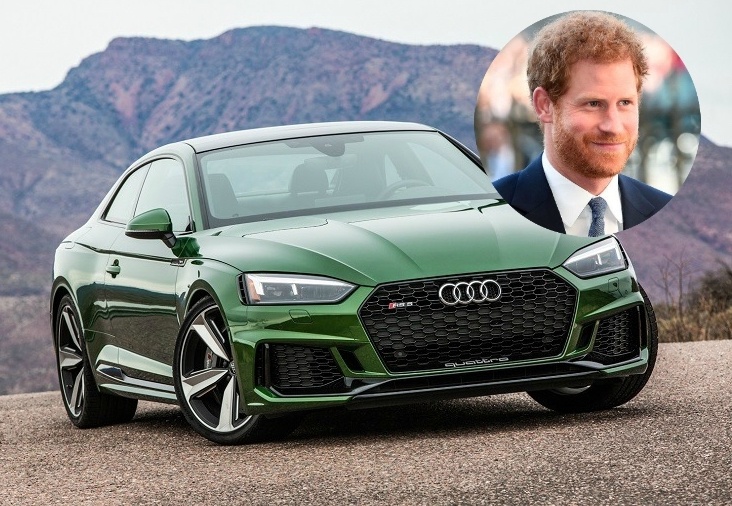 British tabloids gushed over Prince Harry’s new Audi when he took delivery of it in 2014. Back then, the prince was still a bachelor, and the RS5 coupe with a honeycomb grille was the ideal car for that period.

Next: Upon seeing this Aston in the 1990s, Charles was smitten. 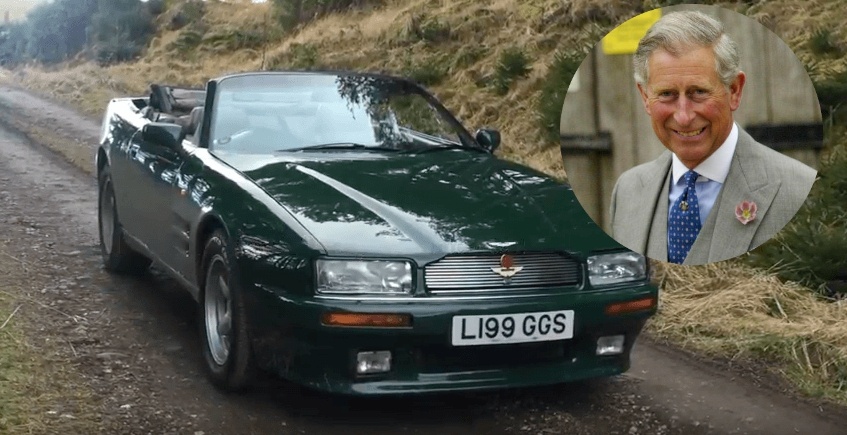 When Aston Martin debuted the stunning Virage Volante in 1993, the automaker invited Prince Charles to drive one. Following his first spin, the prince decided he needed one and showed an older Aston the door.

Though he later returned it to the factory as he became more passionate about the environment, the Virage Volante was one of the hottest cars to enter the royal garages. It’s also one of the cars that’s been banned in America in recent years.

Next: A top-of-the-line Jaguar sedan should always be in the royal family’s possession. 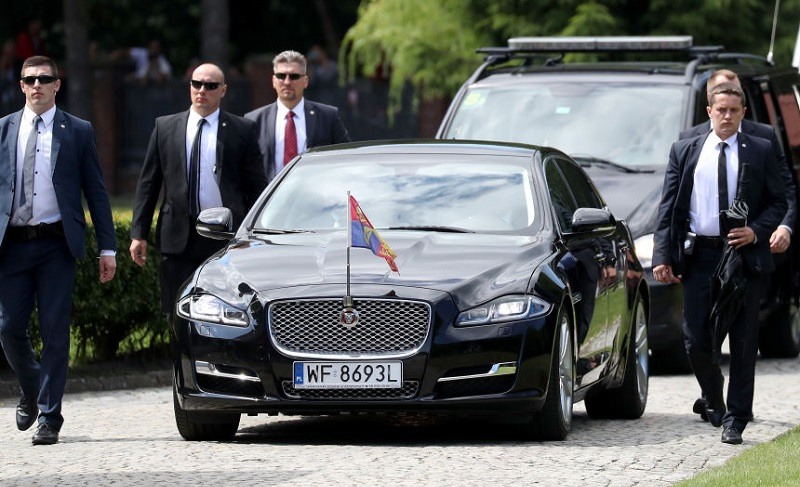 Every royal family needs a range-topping Jaguar sedan, and for Kate and William that car is the XJL. The long-wheelbase edition starts at around $85,000 and has a supercharged model (470 horsepower) available.

You can see why this car would be an ideal choice for trips around Europe, like the one Kate and William made to Poland in 2017.

Next: A third Aston belonging to Prince Charles was a gift from the Emir of Bahrain. 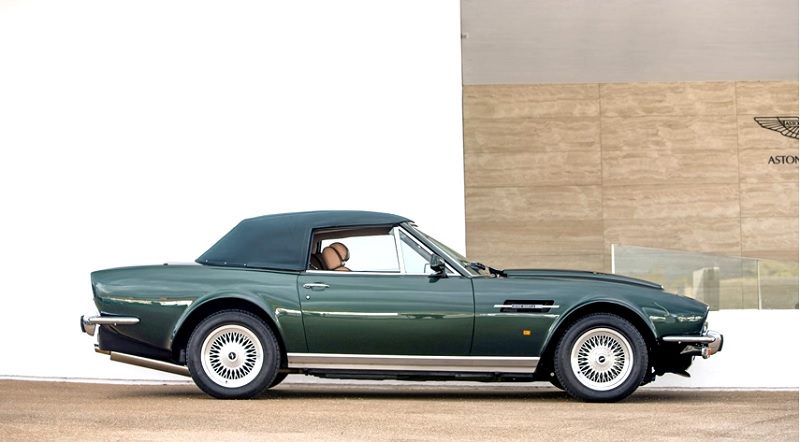 All things considered, Prince Charles got two of the greatest car gifts of all time. It began in ’69 when the queen got him the blue Aston DB6. Nearly 20 years later, the Emir of Bahrain gave Charles a V8 Vantage Volante on a visit to England.

The prince drove this British Racing Green model until he fell in love with the Virage Volante in 1993.

Next: Is Harry and Meghan’s Jaguar E-Type the most beautiful electric car on earth? 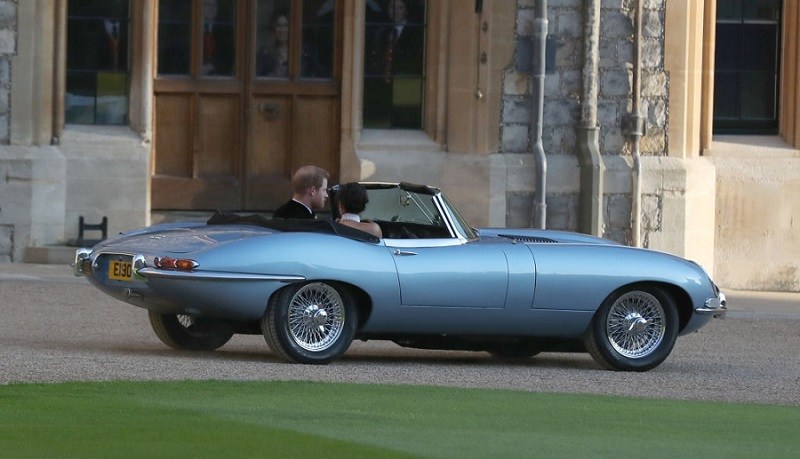 Prince Harry, Duke of Sussex, and Meghan Markle, Duchess of Sussex, leave Windsor Castle in Windsor on May 19, 2018. They drove the Jaguar E-Type to attend the wedding reception at Frogmore House. | Steve Parsons/AFP/Getty Images

When they left their wedding service, Prince Harry and Duchess Meghan drove off in the Jaguar E-Type convertible, which some have called the most beautiful electric car in the world. Given some of the challengers out there, we feel like the title is secure.

Jaguar Land Rover Classic first showed off this car in September 2017, and its Coventry facility specializes in restorations and conversions of vintage models. Between this Jaguar EV and Charles’s wine-powered Aston, the royal fleet is quickly becoming as green as Buckingham Palace.