These Pro Sports Teams Could Go Bankrupt in the Near Future

Undoubtedly, there is money in sports. The NFL is a $13 billion industry, while the MLB is worth $36 billion. The NBA and the NHL each hold their own in annual revenues, too.  But there are a lot of reasons why professional sports teams would face bankruptcy. Poor management at the top and a threat of relocation can hurt a fan base severely. National anthem controversy can swing the pendulum drastically in either direction when fans lose interest.

Of course, ticket sales are the bread and butter for most pro teams, and once fans refuse to file through the turnstiles, making money becomes an uphill battle. Some teams have been bleeding for years, making their bankruptcy file almost inevitable. But for this 15 pro sports teams, that day could be sooner than we think.

NFL ratings are down overall, thanks to controversial NFL protests and the troves of cord cutters across America. Even more alarming is the trend of tickets reportedly being sold but not used. The Chicago Bears are a team whose profits are suffering from this trend. They sit in the biggest TV market, yet consistently underperform financially, according to Forbes. And fans have stopped coming to the games. Some even go so far as to say the Bears have become “irrelevant.” Once you lose your fan base, it becomes harder to stay afloat.

Next: Some seriously sucky rankings for this MLB team

The Tampa Bay Rays have struggled to attract fans to their games for years. They consistently rank the ballpark unfavorable and recent Sports Illustrated data suggests the club has some serious food safety concerns when it comes to ballpark eats at Tropicana Field. Florida is a state of transplants, so attracting local fans is harder than most. Still, this issue does nothing to help increase its lowly annual profits.

Next: Relocation woes may spell disaster

There are some serious signs of trouble with the LA Chargers. | Harry How/Getty Images

Team relocations are often a sign of internal financial woes. So stadium musical chairs happening within the new Las Vegas/Los Angeles teams could be a game changer for the NFL. The Chargers are leaving a profitable San Diego market to share the spotlight with another team in L.A. Experts worry this will backfire, as it’s never a good idea for teams to turn their backs on fans who’ve supported them for years.

The Chargers followed the St. Louis Rams to L.A. to play in Rams owner Stan Kroenke’s privately financed $2.6 billion new stadium. Is this a wise move? Only time will tell. All we know is that the Chargers didn’t sell out a single game in 2017.

Next: Could this move mark the beginning of the end for this NFL team?

There are a lot of sad fans in Raider Nation right now. | Lachlan Cunningham/Getty Images

Another team in the middle of the NFL relocation shake-up is the Oakland Raiders. They’ve begun the process of moving to Las Vegas — a market Neilson says ranks in the bottom five of the league with only 758,000 TV homes. Their former San Francisco Bay area home was the nation’s sixth-largest market by comparison. Could this be the beginning of the end for The Raiders franchise?

Next: The fate of one basketball team hangs in the balance

Confidential NBA records obtained by ESPN found nearly half of the 30 NBA franchises lost money last season. The NBA’s $24 billion TV deal should have been a beacon of hope for the league’s revenue disparity, but that didn’t happen for the Memphis Grizzlies.

They uphold top standings among their fan base thanks to a long string of playoff appearances, but financially, their performance is a different story. Boosting their player payroll led to a $40 million loss. They earned a measly $9.4 million in local media rights last year, according to the report. They also have the smallest market in the league by Nielsen rankings, which would likely offset any future revenue and cause continual challenges.

Next: A shocking sale in Brooklyn

After years of underperforming, the Nets are up for sale. | Jonathan Daniel/Getty Images

Brooklyn Nets owner Mikhail Prokhorov is selling the team for a record-breaking $2.3 billion. Who knows how the surprising change in management will affect the team moving forward, but ESPN documents show the team lost about $44 million last season. But before we assume failure, some say their poor profits could be salvaged with the revenues received from the non-basketball events held in the Barclays Center, which the team also owns.

Next: Is an entire sport done for? 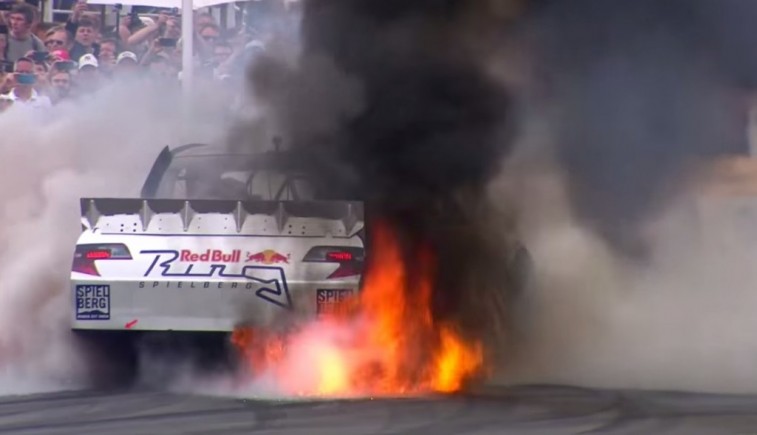 NASCAR is in serious trouble. | Goodwood Festival of Speed via YouTube

Even NASCAR, which once enjoyed some of the highest ratings in sports, has been stalling. Revenues and TV ratings are plummeting as big-name drivers and profitable sponsors exit the sport. Lucrative sponsor Target ended its deal with NASCAR, opting for Major League Soccer partnerships instead. Even the sport’s series finale in Homestead, Florida, posted viewership down 23% year-over-year. While the final nail in the coffin is likely still years away, such a drastic fall in ratings could suggest future bankruptcy.

Next: MLB team that’s breaking all the rules 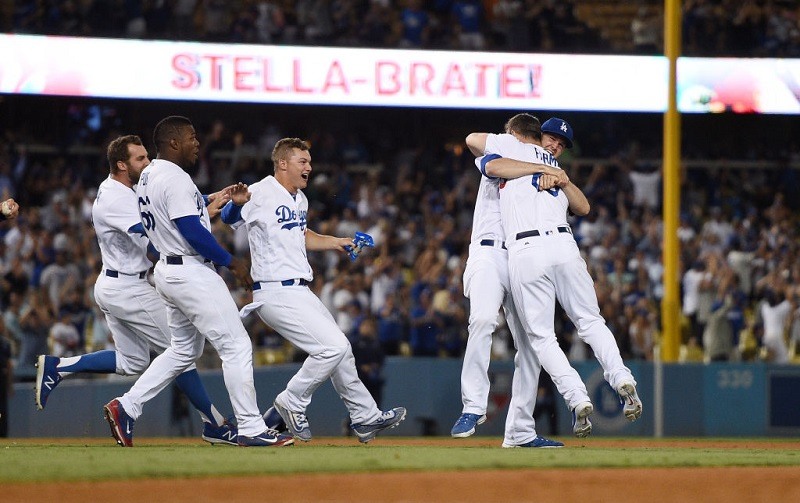 The Dodgers were bankrupt just four short years ago. But their highly-populated market makes them one of the most profitable franchises. They’re also under an MLB mandate to cut debt. Recent big-name acquisitions cost them $1 billion to secure players like Clayton Kershaw and Adrian Gonzalez.

Of course, they’ve enjoyed a winning record as a result, but MLB rules state a team can’t have debt more than 12 times their annual revenue. SB nation thinks a payroll reduction is absolutely necessary for franchise salvation as the Dodgers are at least “hundreds of millions of dollars” in debt.

Next: Trouble for a Midwest hockey team

The Blues are in danger of alienating their fans. | Minas Panagiotakis/Getty Images

The St. Louis Blues went eight-straight years without profit, despite filling their arena to capacity almost every game. Such low cash flow means they’re not necessarily attracting the most competitive players either. They’ve seen a recent uptick in profits, but Forbes notes their current TV deal with Fox Sports Midwest that gives them the lowest rights fees in the league expires soon. A $64 million facility renovation may reap returns long-term, but part of the debt will be paid through a 5% tax on ticket sales, which is likely to go over like bricks with loyal fans.

Next: No one has any faith in this team

From a business standpoint, the Coyotes are the worst franchise in the NHL. | Kirk Irwin/Getty Images

Hockey and the dessert are two words that just don’t jive. The Arizona Coyotes were once the Phoenix Coyotes, but years of financial trouble forced them to sell in 2013. Their losing seasons since the sale are likely to plague them for years. In 2015 they lost $34 million in revenue, but the CEO was shockingly OK with it. The fact that Forbes rated them worst in the NHL for business value could end their tenure entirely.

Next: Legal battles are costly

A controversial mascot is a problem for the Redskins. | Ezra Shaw/Getty Images

The Washington Redskins have spent an enormous amount of cash, time, and effort defending their rights to Native American-themed trademark registrations in federal court. The powers that be have yet to officially rule on the Redskins’ fate, but a command to rebrand would cost the team exponentially.

Not only would they likely lose fans who feel strongly about the subject with either ruling, they’ll lose serious revenue. The Redskins receive $70 to $80 million in merchandising revenue currently, and a full-fledged rebrand would become a costly situation.

Next: Bankruptcy is possible for this team

Nothing spells impending financial doom like terrible attendance records. Unfortunately, the Denver Nuggets have been playing for the least amount of fans for nearly a decade. Playing at a 76% capacity is sure to hurt the books, and considering other Colorado sports teams also struggle with the same issue, a future filing wouldn’t be all that surprising.

Next: Embarrassing profit loses in Detroit

ESPN’s report shows the Detroit Pistons lost $63.2 million last season. This compares to the $115.4 profits the Los Angeles Lakers enjoyed with a worse record than the Pistons. Management hopes their move to a bigger and better arena will help get the financials back to black, but it seems unlikely considering attendance levels have been embarrassingly low for five years running.

ESPN suggests the Milwaukee Bucks are another team getting the short end of the stick when it comes to the NBA’s 2014 TV deal. When it comes to net income after revenue sharing and operating income, the Bucks are one of nine NBA teams falling short. The small(ish) TV market doesn’t help the team boost profits and avoid possible bankruptcy either.

Next: Drama in Detroit

The Tigers have been on the skids for years. | Gregory Shamus/Getty Images

The Detroit Tigers and Red Wings owner Michael Ilitch died in February 2017. His widow is unable to take the reins because she owns MotorCity Casino Hotel, and the MLB rules prohibit team owners from having any gambling affiliations. But not being able to take control could be a blessing in disguise. The Tigers’ attendance records have fallen for three straight years and run operating losses six of the past nine seasons.  They’ve also lost a few devastating playoff bids recently.