“Why am I back here … again?” you ask as you make yet another trip to the grocery store this week. “And why is my bill so expensive?” It’s a likely scenario across America as all kinds of products are getting smaller while the price stays the same.

It’s a hidden form of inflation The Consumerist nicknamed “Grocery Shrink Ray“. As we dug into the ongoing discussion about shrinking grocery products, we realized the trickery has been hacking wallets for years. Edgar Dworsky, founder of ConsumerWorld.org, explains the phenomenon perfectly in an interview with Time Magazine. “Consumers really don’t have in their minds that they have to check the net weight or net count every time they buy something,” says Dworsky. “It’s the perfect consumer scam — when consumers don’t know they’ve been taken.”

A Chicago-based study published in the Journal of Retailing in 2013, found that consumers are four times more sensitive to price fluctuations than package size. Therefore, companies resort to changing qualities and downsizing to counteract rising production costs instead. Shrinkflation is real! But the buck stops here. Here are 15 products that are shrinking in size, but not in price, that you must know about.

While other ice cream companies, like Breyers and Haagan Dazs, silently shied away from actual half-gallon containers, Blue Bunny held steady for as long as they could, going so far as to tout that their ice cream gave consumers two extra scoops of deliciousness in their 56 ounce container. But recently, even the bunny fell victim to the next wave of shrinking grocery products, making it clear that peer pressure is rampant in the industry. They used a package redesign to mask shrinkage down to 46 ounces, or 1.44 quarts, proving the point that consumers must be pay more attention to individual item labels before purchasing.

Next: Cleaning up after dinner could get harder with less of this shrinking grocery product.

Household cleaners are one of the most recent products up for discussion in The Consumerist’s investigation into grocery shrinkage. First up, Cascade Complete dish detergent pods. The bag now contains 23 packs instead of 25. Not only did these convenient little buggers get a bit stingier in product, they’re also a big rip off money-wise, according to BargainBabe.com. She says people looking for a bargain should stick with powder or liquid detergent over pods.

You get less Febreze than you used to | iStock.com

The Consumerist also called out Febreze Air Effects for downsizing their can but not their price. Readers noticed the packaging switched from a metal can to a plastic spray dispenser with barely a peep. And while the difference in display doesn’t mean much in consumers’ eyes, the fact they lost nearly an ounce of product along the way does.

Dipping an Oreo in milk may not be as fun and satisfying as it once was. Some claim that “double stuf” Oreos don’t actually have twice the sugary cream consumers devour. In fact, when a math teacher and his students compared Oreo products, they found “double stuf” only had 1.86 times the “stuf” — which doesn’t exactly add up.

Reddit users are slightly peeved that Oreo is attempting to sell cookies with 50% less cream by way of “Oreo Thins” for the same price. It’s just another case of successful, yet deceptive product rebranding that hopes to distract consumers from shrinkage.

Even the bread’s smaller at Aldi. | iStock.com/gashgeron

America loves the German grocery chain for its bargain deals and no-frills shopping experience. But what isn’t so beloved about Aldi is their recent contributions to the expanding list of shrinking grocery products. Sourdough bread got 3/10 of an ounce smaller, but according to a The Consumerist reader, the weight in grams never actually changed on the label. Sneaky. On a slightly more positive note, their Stonemill sea salt product is slightly bigger — 1/10 to be exact.

Next: A lunch time staple you’re getting less of

When Boston Globe and Consumerworld.org uncovered that Chobani Greek yogurt shrank its cup size, the fans of the Greek yogurt trend took notice. The 6-ounce cup shrank to 5.3 ounces, which amounts to about 10% less product. But even more alarming is the justification from the company themselves.

The Globe reports that, Peter McGuinness, Chobani’s chief marketing and brand officer, sees nothing wrong with the change. “It is the established category norm; everyone is at 5.3 ounces. Many of our consumers were confused at the shelf when comparing nutritional information. Many have sent messages clearly to us saying, ‘Why do you have more sugar and calories?’ We wanted to level the playing field so they were comparing apples to apples, yogurt to yogurt.”

The famous candy bar got lighter in weight | iStock

Mondelez bravely underwent a product redesign of its most famous chocolate bar, Toblerone. When the company announced that the very peaks and ridges that made the candy so famous would be designed with more space between the mound, customers were furious. The rebrand took the overall weight from 170 grams to 150 grams, without ever changing the price. Mondelez cites rising production costs in Switzerland for the overhaul.

Next: A sneaky spice trick that went to court

Clark.com called attention to another shrinking grocery product, spices. Watkin’s Inc. and McCormick are dueling in court over the decrease in product McCormick offers in its tins. Watkin’s Inc. claims the spice company is deceiving consumers by putting 25% less pepper in the same size pepper tin, effectively going from 8 ounces in weight to 6 ounces. McCormick dismissed claims of false advertising stating the correct product weight was always listed on the front label, consumers just didn’t notice.

Next: An Easter delight 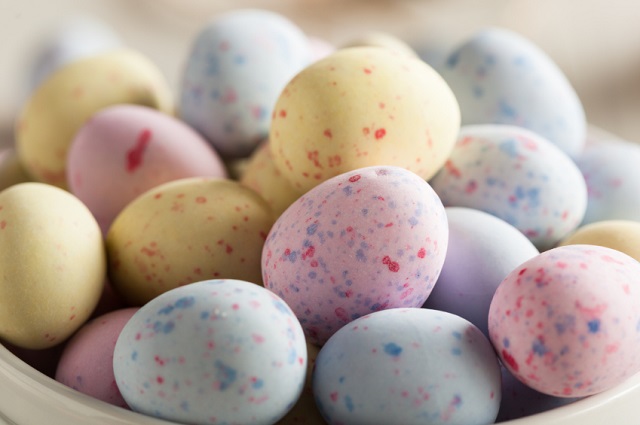 We’re being robbed of an Easter tradition | iStock

A recent reddit feed exposed some angry consumers who felt robbed of a childhood Easter staple. The Telegraph reports that Cadbury’s revenues have dipped since the company announced that it would change its recipe by swapping out the dairy milk for “standard cocoa mix chocolate.” Cadbury Crème eggs once weighed 39 grams, but now weighs 34 grams. Even worse, Cadbury egg multi-packs, which have historically come six to a box, now include only five for the same price. People are up in arms.

Next: Potato chips are full of hot air

It’s just a bunch of hot air in there | iStock.com/GooDween123

Potato chips are another grocery product struck by hidden inflation. Lay’s and PepsiCo announced their product reduction after getting hit with rising production costs. Lay’s regular packs are 10 ounces but flavored chips are 9.5 ounces — which makes a 5-6 chip difference per bag, according to Time. So, if you’ve been feeling a stronger gust of air each time you open a bag of potato chips, know it’s not your mind playing tricks on you. You’re paying the same price for less product — but it’s saving the company millions.

Next: The trickery with TP

If your household is going through more toilet paper than ever before, don’t panic, nothing is wrong with you. Consumer Reports has been testing toilet paper since 2009 and found that some brands have shrunk toilet paper rolls by as much as 23%. To distract consumers from the change in size, companies usually try to simultaneously debut new products with features like “jumbo” or “mega” while increasing the size of the cardboard tube to make up the difference. It’s enough to make families furious.

Next: Pretty much all canned and jarred staples

12. Most anything in jars

Most canned items are victims of shrinkflation | Justin Sullivan/Getty Images

Most items that come canned or jarred have fallen prey to shrinkflation. And consumers are starting to notice the difference. In response to Mike Timmerman’s Clark.com post regarding this very issue, readers shared their own mishaps with shrinking products. One reader calls attention to jars of peanut butter, apple sauce, and mayonnaise — which to the untrained eye may look the same — but have smaller quantity. Companies are molding the bottom of jars with higher arcs to hold less product. Even cans of tuna come with 29% less meat according to LenPenzo.com. And yet, prices remain the same.

Next: The cereal mystery

There’s something confusing grocery shoppers around the world. It’s a mysterious case of the incredible shrinking cereal box. What used to be considered standard size is now considered “family size,” while companies are busy filling boxes with less snap, crackle, and pop. The debauchery has been happening for years, with consumers reporting smaller boxes and product in popular cereal brands like Kellogg and Kashi.

Next: A shrinking product that’s not so minty fresh

Toothpaste companies are some of the worst offenders when it comes to misleading consumers with package size. A long rectangular box of toothpaste leads you to assume the actual tube will be the same size as the box when you open it. But alas, it is not.

Mouseprint.org shed light on a similar scenario with Colgate toothpaste. They decreased the largest tube of regular toothpaste from 8.2 ounces to 8.0 ounces, then created a false impression that the new box is giving you 33% more. But when you read the fine print on the back, their claim of more product is only accurate when compared to their 6-ounce package.

Next: A morning necessity for some

Coffee servings are getting smaller and smaller | Chris Hondros/Getty Images

It’s a risky move for coffee companies to gamble with product offerings when considering how unpredictable their customers without a morning jolt can be. But companies are willing to take the chance. There once was a time when coffee sold by the pound was truly a pound in weight. These days, however, many brands are filling the bag with less grounds of caffeine injected goodness, sinking down to 11 or even 10 ounces per item.