Put 53 Years on the Clock: The End of Easy Oil Is Within Sight 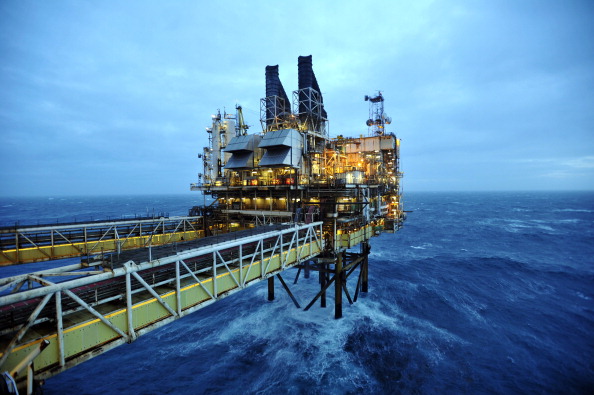 Love it or hate it, British multinational oil and gas company BP is one the world’s top institutional experts on energy. Besides being a business leader in its industry — the sixth largest integrated oil company (IOC) by market cap in 2013 — the supermajor is at the forefront of the semi-commercial, semi-academic conversation about the future of energy use at large. Since 1952, BP has offered a share of its two cents in the form of an annual statistical review, the aim of which is to share data and insight about current energy markets and where the world could be heading.

The report proper is somewhat dense and is generally only partially digested, if at all, by the media, but the 2013 review contained a few salient points that were thrust into the spotlight. First, and most broadly, was this insight: Demand growth for fossil fuels outpaced supply growth.

In the chart below, you can see how production and consumption has changed overtime for various regions. Note that Asia Pacific consumption (on the right in orange) has exploded, not only outpacing production growth in the region but also outpacing demand growth in nearly every other region. Emerging economies, which make up a large share of the Asia Pacific profile, accounted for about 80 percent of new consumption in 2013. Also note the relatively sharp increase in North American production (on the left in lime green.) 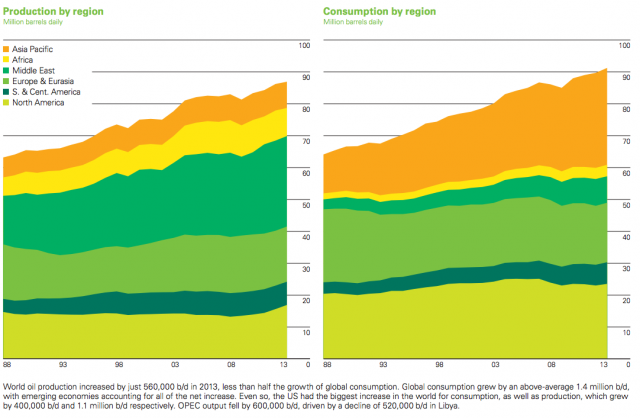 While shifts in supply and demand are definitely important to understanding the energy market at any level, the BP review made one claim that kind of trumps any other topic of conversation. The claim is this: there are about 1.69 trillion barrels of proved oil reserves in the world, enough to meet global production for only the next 53.3 years. The calculation didn’t appear to attract much attention in the report itself, but the number was quickly picked up by media and framed as a prediction for the peak oil event.

Peak oil was an idea championed by American geologist M. King Hubbert. Hubbert worked at the Shell research facility in Texas between 1943 and 1964. During that time he advanced the idea that given that oil is a fossil fuel, production will inevitably peak and inexorably decline. The idea is fairly intuitive — a limited resource will eventually run out if it is continuously gathered — and it gained a lot of traction with environmentalists.

But one of the biggest problems with the peak oil idea is information — there is never enough of it. When Hubbert was first popularizing the idea, proved oil reserves were just a fraction of what they are today. As technology advances, we not only find more oil, but we are able to extract oil that was previously out of reach. Think hydraulic fracturing and oil sands. Despite our best efforts to calculate how much oil is technically recoverable at any given point in time, we have to accept that we really just don’t know. At best we are estimating, and oftentimes it feels like we are outright guessing.

But the thinking behind peak oil is solid. Here’s Hubbert himself talking through the idea in 1976. Note that his prediction at the time called for production declines beginning in the late 1990s.

If you were to look around and stop at fracking, it would be easy to believe that oil and gas extraction is easier now than it has ever been — and in many cases, this is true. From a production standpoint, fracking is an incredible technology that made viable an enormous amount of resources previously thought to be not commercially recoverable.

But shale gas reserves aren’t the whole picture, and all over the world oil and gas companies are reaching farther and deeper in order to access oil. Ben Ayliffe of Greenpeace is understandably biased, but he view this reaching as a sign of desperation. Commenting in 2013 about Exxon Mobil’s efforts to drill for oil in the arctic, Ayliffe said that, “Exxon’s staggering Arctic investment is proof that the age of easy oil is coming to an end. The oil industry is being pushed into increasingly remote and marginal areas where costs and risks are commensurately higher, and all to chase the last remaining drops of a fuel that causes pollution, corruption, and climate change. You have to ask what it means for global efforts to combat climate change when the world’s biggest oil company is pumping these kinds of sums into the Arctic, a region that’s opening up to exploitation because rising temperatures are causing the ice to retreat. World leaders need to create conditions that would see hundreds of billions invested in clean energy projects instead of frontier oil.”

While the oil and gas industry is often quick to dismiss the criticism of environmentalists, there is no escaping the logic of peak oil and there is no doubt that oil and gas industry executives see it plain as day. The issue is not “Will we ever run out of oil?” It’s when, and what’s be the best strategy for carrying us through in the meantime? Part of the answer is certainly to use oil, gas, and coal as an interim energy source — after all, it’s what the global infrastructure is built around. Where the peak oil criticism is most relevant is in the design and implementation of new infrastructure or means of transportation. Industry should be embracing what fossil fuels can do for us today while moving toward a post-peak oil future.

But these are just a few of the insights from the report, and although they represent some of the most interesting parts of the energy conversation they account for just a small share of what there is to talk about. If you’re interested in getting beyond the headlines and seeing what the real experts have to say, check out the video below. This is BP Chief Economist Christof Ruhl speaking at the Columbia SIPA Center on Global Energy Policy in June. The whole thing is nearly 90 minutes long, but Ruhl is one of the world’s top energy experts. If you want to understand global energy production and consumption — if you want to understand the energy market so that you can invest or conduct business in it — then it’s worth listening to what this guy has to say.

One of the biggest questions in the energy conversation right now is about prices (really, when are prices not one of the biggest pieces of the conversation), and in particular why prices have behaved they way they have given shocks to supply and shifts in consumption. If you’re not interested in sitting down for the whole talk, skip to about 12:30 to hear Ruhl address this topic.