“As you are aware,” Federal Reserve Bank of New York President William Dudley said in a speech at the Fordham University Graduate School of Business on Monday, “at last week’s FOMC meeting we made no changes to our monetary policy. In particular, the Committee decided to continue to purchase long-term Treasury securities and agency mortgage-backed securities at a monthly pace of $45 billion and $40 billion, respectively.”

This news, announced Wednesday at the conclusion of a two-day policy meeting, came as a surprise to the markets. In the weeks heading into the meeting, many economists and traders had settled on the idea that the Fed would decide to taper assets purchases at least a little bit — estimates generally came in a range between $5 billion and $15 billion per month — and the markets began to price in such a policy change. Interest rates climbed a full percentage point between May and September, and equities experienced two fairly violent “taper tantrums,” one in June and one in August.

Now that the great non-event has had time to settle over the markets — the yield on the 10-year Treasury came down about 0.2 percentage points and equities soared to fresh all-time highs in the wake of the announcement — investors appear to be revisiting their economic expectations. 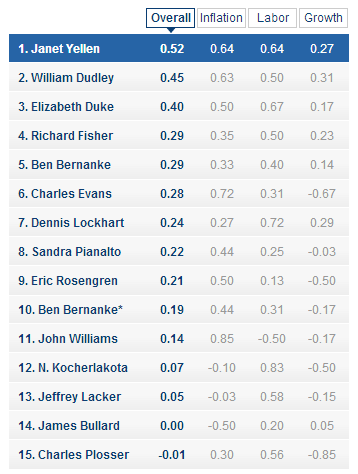 Economic forecasting is pretty much an impossibly difficult task, but it’s the duty of policymakers at the Fed to look into their crystal balls and report what they see. How accurate — and therefore useful — their forecasts are is certainly up for grabs, but, generally speaking, the economists at the Fed produce some of the best forecasts around.

Right now, it seems particularly worthwhile to revisit a scorecard compiled by The Wall Street Journal that rated 14 Fed policymakers by the accuracy of economic forecasts made between 2009 and 2012.

It is the consensus of pretty much every pundit that current Fed Chairman Ben Bernanke will step down come January, when his term is set to expire, and that current Vice Chair Janet Yellen is the favorite to succeed him. On the issue of economic forecasting via the WSJ scorecard, Yellen took the top spot and claimed the title of most accurate forecaster among the Fed policymakers observed.

This is no small feat — in fact, it should hopefully be of some comfort to the market during the transition period. With former Treasury Secretary Lawrence Summers officially out of the picture, markets are looking forward to a steady hand guiding Fed policy for the foreseeable future. This expectation — that Yellen, and not someone else — will be the next chair of the Fed will itself play into market expectations about future conditions.

For example, Yellen is expected to champion the accommodative policy that was pioneered under Bernanke. She appears to be intent on leveraging monetary policy in order to reduce unemployment as much as possible, even if it means allowing inflation to run a little high. Right now, given generally soft inflation data, this does not seem like a problem, but it is a position and policy preference that market participants will keep in mind when forming expectations about Fed policy in the future.

Speaking in New York, Dudley outlined his outlook for the U.S. economy, once again pitting the ongoing recovery of economic fundamentals against fiscal headwinds in a great game of tug-of-war. As Dudley put it: “Let’s dig a bit deeper into the tug-of-war between improving fundamentals and the drag exerted by fiscal policy and tighter financial conditions.”

On the side of fundamentals, Dudley highlighted the improvement in the balance sheet of the household sector. One of the reasons the late-2000s crisis was particularly devastating was that the catastrophe came in multiple financial flavors. Households were particularly leveraged heading into the housing collapse, and much of that leverage was in the form of residential mortgages. But now, five years after the peak of the crisis, levels of household debt are down to where they were in 2003.

Dudley also cited the housing sector as a cornerstone of the recovery to date. However, he did underscore the fact that home building activity is still well below the expected long-run rate that economists project is necessary to satisfy demographic trends. The current annualized rate of housing starts is approximately 900,000, well below the 1.5 million level that it is expected to ultimately reach.

“The underlying fundamentals supporting business investment are also good,” Dudley continued during his speech at Fordham on Monday. “Profit margins have been high and cash flows strong for some time. Credit availability has been gradually improving. For example, the Federal Reserve’s Senior Loan Officer Opinion Survey indicates that banks are continuing to gradually ease their lending standards for commercial and industrial loans.”

However, on the side of fiscal headwinds, Dudley resurrects this calculation from the Congressional Budget Office: ”The Congressional Budget Office (CBO) estimates at about 1¾ percent of potential GDP in 2013. The two most important components of this restraint are the end of the payroll tax holiday and the increase in income tax rates this past January, and, more recently, the government spending cuts resulting from budget sequestration.”

Dudley also cited the dramatic increase in interest rates over the past few months. This increase in rates is expected to become at least a short-term drag on the housing market. Indeed, mortgage application and refinance activity has taken a blow, and major financial institutions have announced massive layoffs in business units related to the housing industry.

“Currently, improving economic fundamentals versus fiscal drag and somewhat tighter financial conditions are pulling the economy in opposite directions, roughly canceling each other,” said Dudley. “The economy continues to grow and payrolls are rising, but there is little evidence of a pickup in the economy’s forward momentum. For example, real GDP growth is still stuck close to the 2.2 percent average annualized growth rate that has prevailed since the beginning of the expansion.”

Of all the ways to describe the economy, a great game of tug-of-war is certainly one of them. It’s pretty easy to imagine the economy as a limp rope held on one end by the Fed and the other by Congress. From the outside, it’s difficult to determine what the real problem is: either the rope is too heavy, or the players are too weak (in this analogy, it doesn’t look like anyone’s supposed to win, but the rope should at least be taut). 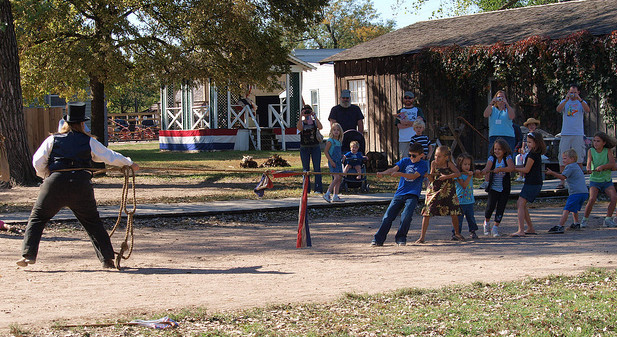 Don’t Miss: CBO: We Have a Tax Problem, Not a Spending Problem.