Fans of Warren Buffett need not worry that the chair, president, and CEO of Berkshire Hathaway (NYSE:BRK.A) (NYSE:BRK.B) will be going anywhere any time soon — because he isn’t. Although he doesn’t have much to say about the Alibaba IPO, he had a lot to tell Fox Business about his successor.

“Well, the candidates are all internal,” Buffett told Fox Business. “And I’ve said that they are male at the present time, although that would not necessarily be the situation, in the future.” Buffett told CNBC on Monday that he was impressed with General Motors (NYSE:GM) CEO Mary Barra when he met her this past fall at a conference.

Since Buffett’s Berkshire Hathaway owns 40 million shares of General Motors, and he said that he is open to a female successor, Barra may be on his radar. She has been said by many to be handling the current GM recall crisis, and seems to have the leadership qualifications for such a feat. However, Buffett would have some expectations for his successor regardless of sex.

“Now, they’ll do things their own way. And they should. But we have a distinct culture. And we set our economic principles in the back of the annual report,” Buffett told Fox Business. “They haven’t changed, virtually, for 30 years. And we’re a certain type of business. That’s not the only way to run things, but it is the way we run things at Berkshire. And I can’t imagine a successor changing that in a material way.” 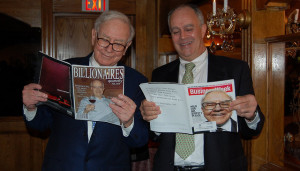 He also thinks it would make sense for his successor to live in Omaha. “I think it’s — the probabilities are almost 100 percent,” Buffett told Fox Business.

However, there are other things that worry Buffett, especially the massive derivatives on the balance sheet over at JPMorgan Chase (NYSE:JPM). “Someday, it won’t matter how large the assets on JPMorgan’s balance sheet. There is no risk control that is effective if the numbers get big enough,” Buffett told Forbes. “I don’t believe the reserve they set up against loss in their derivatives. All that netting stuff doesn’t mean anything. I don’t want to be intertwined with any bank as to significant amounts of receivables.”

According to The New York Post, Buffett has also had some harsh words about housing. “Housing is not that strong yet,” Buffett told The New York Post. “I’m surprised by that.” It shouldn’t come as any big shocker given that the commercial real estate sector has not recovered as the demand for businesses to expand remains stagnant and economies of scale are not present for those businesses at this time given the economy only added 288,000 jobs last month, according to new government data released.

However, according to The New York Times, Buffett defends the actions of former Federal Reserve Board Chair Ben Bernanke who held interest rates near zero. This has been said to prolong the housing crisis that continues to occur, mainly in commercial real estate while the residential market has been bouncing back slowly. He, like many other economists, reiterated how dire the financial crisis was and how he publicly defended the government response. But, he said the actions of what new Fed chair Janet Yellen will do remain to be seen.

“This is not a bubble situation at all, but it’s an unusual situation we are living in,” Buffett said, according to The New York Times. While Buffett may not have any plans to leave his business and that seems fine, his concerns towards housing are potent. The commercial real estate market has not rebounded. The only thing that has been is the slow recovery of the residential market because, frankly, there’s always going to be a demand for home ownership for families.

Yet, what is still important is those who lost jobs in real estate trying to help other businesses expand, and that has not been addressed by Congress, the Fed, or anyone else. It is important that for the future of business expansion and the commercial real estate market that we decidedly lower tax rates and decrease regulation to allow for business expansion in these troubling times. When businesses expand, it requires commercial real estate developers to find it properties, hire construction workers, and work with local government to make that all possible. But, this just isn’t happening right now.

Interested in knowing more about the Buffett empire? Earlier, we had written about five companies that are at the very heart of Berkshire Hathaway. These are what Buffett calls the ‘Powerhouse Five’ — “a collection of large non-insurance businesses” that together make up a cornerstone of Berkshire’s empire. Here is a recap: