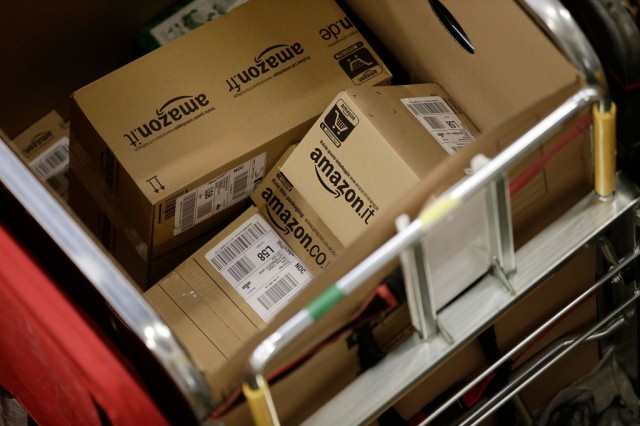 It would seem that things truly do move in cyclical nature rather than in a straight line. Internet retail giant Amazon has decided to prove that theory with recently announced plans to open a physical storefront in downtown Manhattan.

By taking to the Internet many years ago when most retailers were sticking to brick-and-mortar locations, Amazon has been able to build an empire that thoroughly dominates online shopping. But the company’s recently announced plan seems to come way out of left field, although there have been whispers about it circulating for the past couple of years. The Wall Street Journal reports that Amazon’s planned store will sit on 34th Street in New York City, across the street from the iconic Empire State Building.

The store itself will reportedly operate as a central location for customers to pick up their orders, have a small selection of items that can be purchased in-store and also operate as a distribution center. The building Amazon plans on moving into a 12-story former department store, and gives the Seattle-based company a foothold in one of the busiest and most visible locations in the world.

The very idea that Amazon — which revitalized retail by ditching the physical storefront for an all-online approach — would be investing money into what would seem like an antiquated idea is a bit perplexing. But the company’s logic doesn’t look to be too far off-base. Already, analysts and business experts have been weighing in to try and decipher Amazon’s decision. One Cheat Sheet author took a stab at it already, identifying three big reasons why Amazon would go ahead and jump at the chance to open its store. Those reasons being that physical retail stores are still outperforming online counterparts, a multi-faceted approach to retail is superior to converting sales, and that having an actual showroom for new merchandise can go a long way to converting sales.

While all three of those points definitely have merit, perhaps the one that sticks out is the first. Businesses that still employ physical storefronts are still the main driver behind sales by a large margin. A recent study shows that 90% of retail sales occur in physical locations, and 95% of all transactions go through businesses that maintain a brick-and-mortar storefront.

“The store plays a crucial role in online purchases, as two-thirds of customers purchasing online use a physical store before or after the transaction,” says the study, put together by A.T. Kearney, a global management consulting firm. “In these cases, the store makes a significant contribution to converting the sale, even though the transaction is eventually registered online. In other words, the source of value creation (brand building, product awareness) is distinct — or decoupled — from the place of value capture (sales transaction).”

Is it these kinds of findings that are simply too juicy for Amazon to ignore? That may possibly be the case. With the company rapidly expanding into new and sometimes exotic business practices, a physical store really isn’t all that outlandish. After all, Amazon is the company that plans on making deliveries with drones, and has rolled out services like grocery delivery. But what is the ultimate goal? Amazon is already a world-renowned brand that dominates online retail.

Perhaps setting its sights on main competitors outside of the online sphere is the company’s next goal? If that’s the case, then businesses like Wal-Mart, Target, and Costco are likely who Amazon plans to come after.

Wal-Mart looks to be the most likely target. As the country’s largest retailer, nobody else has really been able to keep up with Wal-Mart’s growth or profitability. Amazon has been able to do so mainly because of its online platform. But it seems more and more likely that the two companies are destined to butt heads. Wal-Mart has been reportedly moving around its resources to bolster its online presence, likely in an effort to curb Amazon’s efforts to chip away at their customer base. Those efforts paid off, as Wal-Mart has been able to see considerable growth in online sales.

So is moving into a Manhattan department store Amazon’s experiment to see if it will actually be able to make room for itself in retail centers around the country? Or is it simply a way to make itself more noticeable on the streets of New York, far away from its expansive headquarters, tucked away in downtown Seattle? It doesn’t seem likely that we’ll be seeing Amazon stores pop up in every strip mall or shopping center from Los Angeles to Boston, but perhaps a few stores in strategic locations around the country would be enough to keep the company’s profile high, and its name fresh in the minds of consumers.

The final question is whether or not opening the store is actually a wise investment. Amazon has taken a few hits over the past year or so, with disappointing revenues, employee lawsuits, and failed product launches. The most glaring misstep of the past year or so has definitely been the utter failure of the Amazon Fire phone, which was meant to take on Samsung and Apple, but fell flat as consumers didn’t buy in.

The store requires some considerable investment. Not only is real estate in Manhattan about as expensive as anywhere on the planet, but staffing the location and keeping it stocked with enough products to keep consumers visiting presents a whole new set of logistical challenges. Of course, it is experimental. It’s all a question of whether or not the experiment heeds any results, or at least the types of results that CEO Jeff Bezos is hoping for. But for a company that is skating on some pretty thin margins, it’s definitely a decision that likely has investors wondering.

Whatever the results end up being, and whether or not Amazon decides to pursue other storefronts in different cities, it’s definitely interesting to witness the meandering path that retail businesses are taking. From brick-and-mortar to click-and-mortar — and back again — it looks as though the retail sector has truly come full circle.