Meet the Richest Criminals of All Time, Including 1 Worth $30 Billion

You probably know about these notorious con men, but do you know which criminals are the richest in history? We’ve ranked them according to who amassed the biggest fortune. You’d be surprised where the most famous fall (pages 9 and 14) as well as who takes the number one spot (page 15). 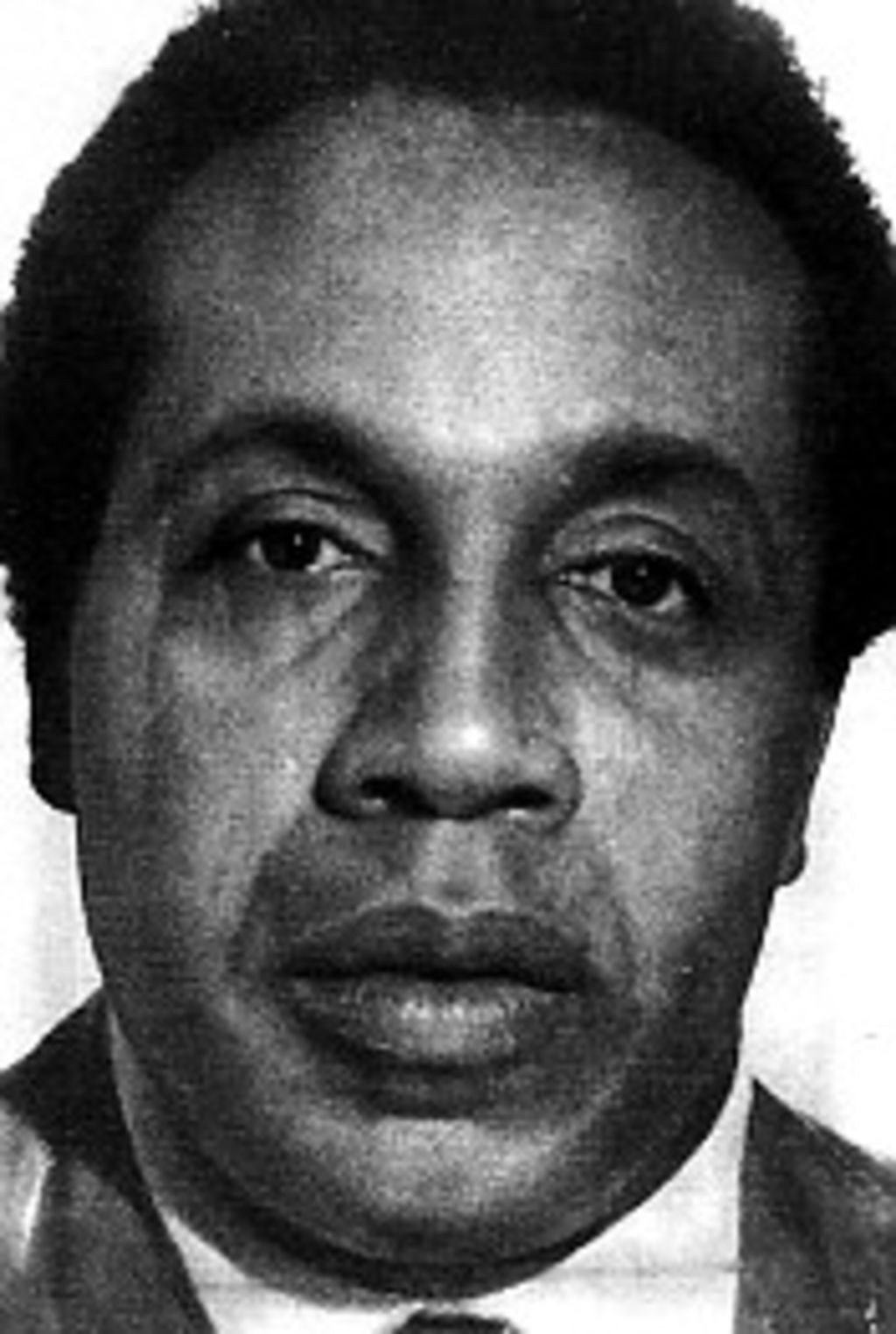 The high-profile Harlem drug lord began his life of crime with petty theft and pool hustling. The drug kingpin’s criminal career inspired a major blockbuster movie, American Gangster, and led to his 18 arrests — but only 3 convictions.

Lucas became infamous in the ’70s for his heroin empire and alleged controversial smuggling methods. He claimed his people trafficked the drugs into America in Vietnam War soldiers’ coffins, while his partner-in-crime said they shipped the drugs in furniture, not caskets.

Next: The million-dollar ‘accountant’ who died with only $35,000 in his bank account. 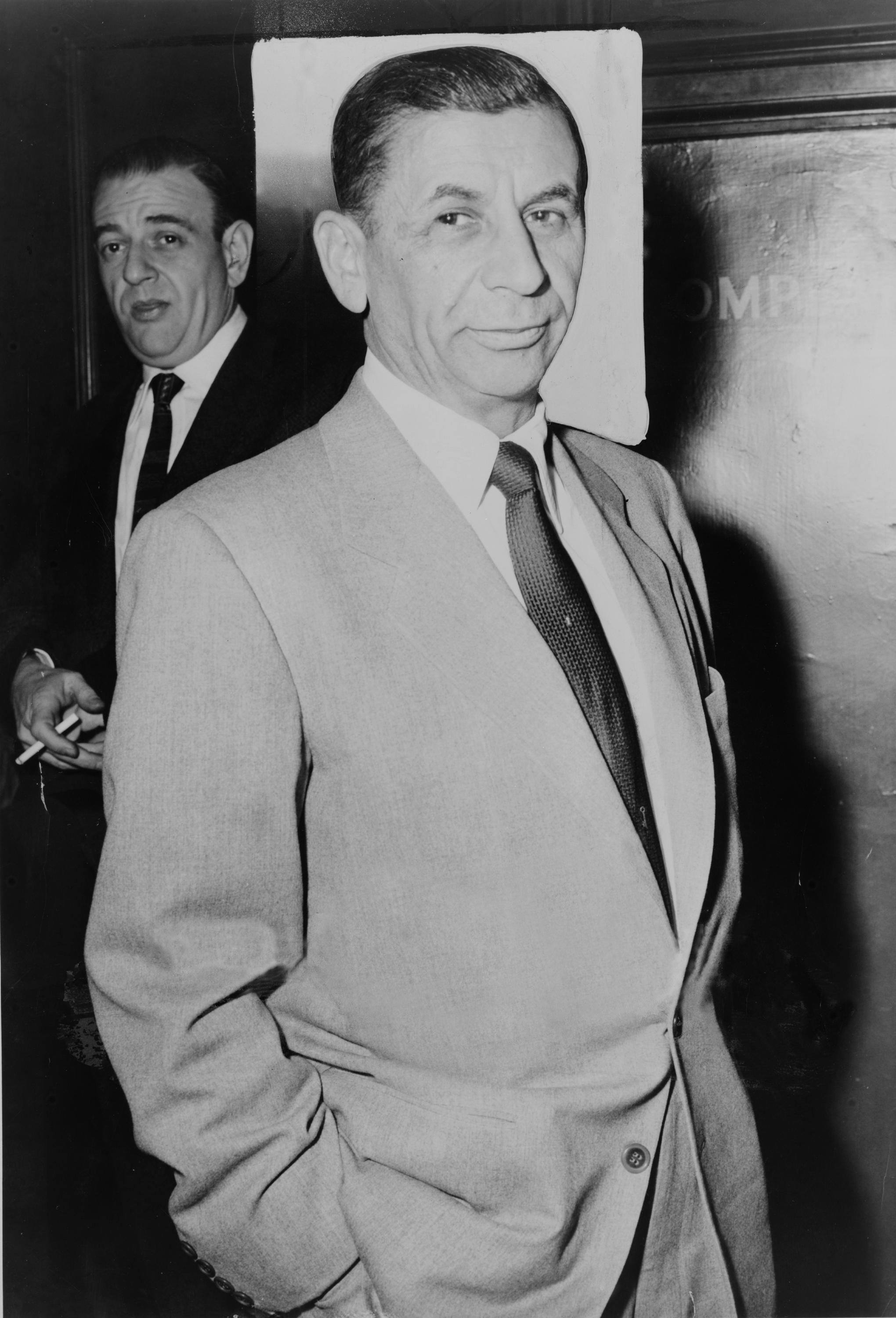 He was the accountant for the mob and eventually faced an indictment on tax evasion charges. | Library of Congress/Wikimedia Commons

The “Mob’s Accountant” was a behind-the-scenes financier dubbed “instrumental” in developing the National Crime Syndicate in the U.S. He partnered with Benjamin “Bugsy” Siegel, developed Las Vegas and Havana as “open cities” for the Mob, and reportedly laundered money through a Swiss bank and London casinos.

Lansky was indicted on federal tax evasion charges in 1970 and attempted to emigrate to Israel to no avail. He was acquitted partially because of his chronic bad health and died of lung cancer in 1983. He had less than $35,000 in his bank account at the time of his death, but federal authorities claim he had nearly $400 million hidden.

Next: She amassed millions as ‘The Godmother.’ 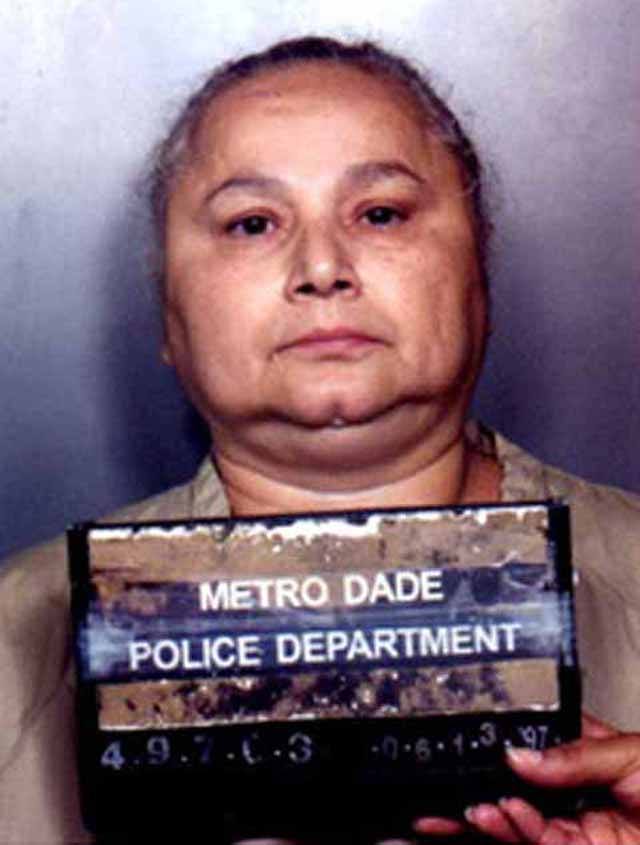 Blanco’s high-profile crimes awarded her many nicknames — “The Godmother,” “Queen of Cocaine,” and “Black Widow” among them — and led to her murder in 2012. The Columbian-born immigrant was a high-level operative in the Medellin Cartel.

Blanco was also known as a “pioneer” in Miami-based cocaine trafficking and was responsible for an estimated 200 murders related to the trade. She evaded federal authorities for years, until 1985 when DEA agents found her in Irvine, California. Blanco then ran her cocaine cartel from prison. She died at 69-years-old after she was shot in the head twice outside a butcher shop in Columbia.

Next: The millionaire who dressed like a regular Joe. 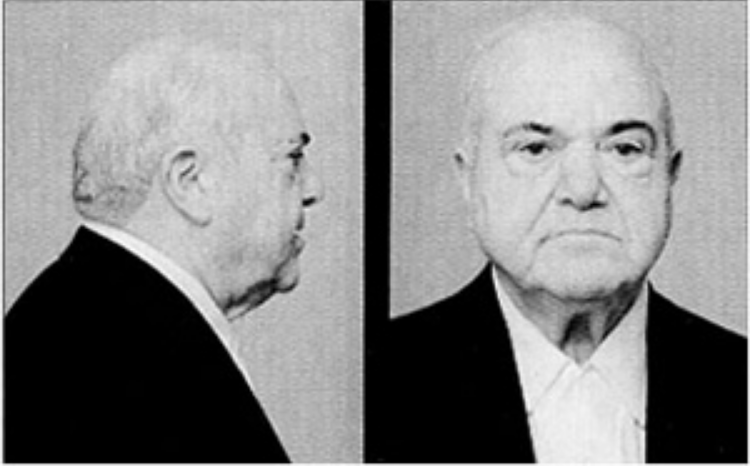 He ended up having a stroke in prison after serving just a fraction of his sentence. | FBI/Wikimedia Commons

Fortune magazine rated “Fat Tony” Salerno the “most powerful and wealthiest gangster in America” in 1986. However, by 1992, Salerno’s health was deteriorating in prison. The New York Times reported he died of complications from a stroke while serving terms of 100 years and 70 years on separate Federal racketeering convictions.

Salerno made his fortune from loan sharking, charging a “Mafia tax” on New York City construction, and Nevada casino fraud. The Genovese crime boss got his nickname based on his size and appearance: he was notorious for toting cigars and sporting a T-shirt-and-fedora clothing combination.

Next: The CEO of security didn’t prove secure for his company.

He left prison in 2014 after serving more than six years for his crimes. | Chris Hondros/Getty Images

Once the CEO of Tyco International, a New Jersey-based security and fire protection company, Kozlowski was convicted of embezzlement. An investigation revealed he received $81 million in unauthorized Tyco bonuses.

Kozlowski stole his millions from the company over a two-year period (1999 to 2001) and used it to buy luxury New York real estate, yachts, and the $6,000 gold-and-burgundy shower curtain that awarded him the nickname “Piggy.” He was sentenced to 25 years at the Mid-State Correctional Facility in New York. He was granted a conditional release in 2014.

Next: The infamous ex-chairman who conducted the largest U.S. Ponzi scheme. 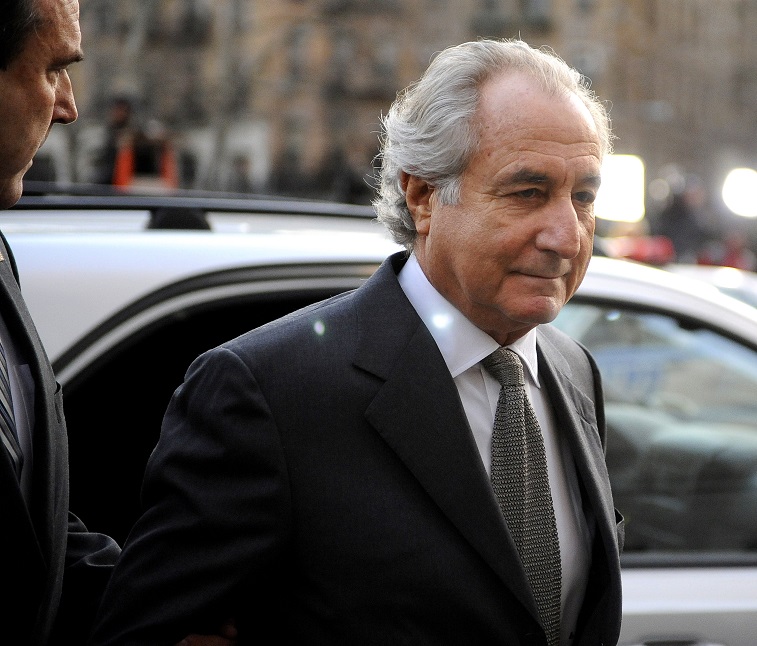 He managed the largest Ponzi scheme in American history before it all collapsed in 2008. | Stephen Chernin/Getty Images

The former NASDAQ chairman admitted to operating the largest Ponzi scheme in U.S. history after his sons turned him into the authorities in 2008. In 2009, “Bernie” Madoff plead guilty to 11 federal felonies. The Madoff investment scandal dates back to the mid-80s and racked up nearly $65 billion from client accounts.

Madoff received a 150-year prison sentence in 2009. He was the “first prominent practitioner” of “legal kickbacks,” a highly-debated financial practice. The fund set up to reimburse customers affected by the Ponzi scheme is reportedly on its ninth distribution, and the total handed out so far is $11.4 billion.

Next: He’s arguably one of the most famous criminals ever.

He was the head of a massive cartel bringing drugs to the U.S. before he was apprehended. | Alfredo Estrella/AFP/Getty Images

El Chapo (which means “shorty”) was nicknamed for his 5’6 height. Regardless of his stature, the Mexican drug lord was called the most powerful drug trafficker in the world by the U.S. Department of the Treasury.

El Chapo headed the Sinaloa cartel, which is responsible for bringing nearly a quarter of the illegal drugs that entered the U.S. from Mexico. The infamous drug kingpin notoriously escaped prison twice and is currently preparing for a Brooklyn trial set to begin in April 2018. He pleads ‘not guilty’ to a 17-count indictment on heading a criminal enterprise and conspiring to murder. 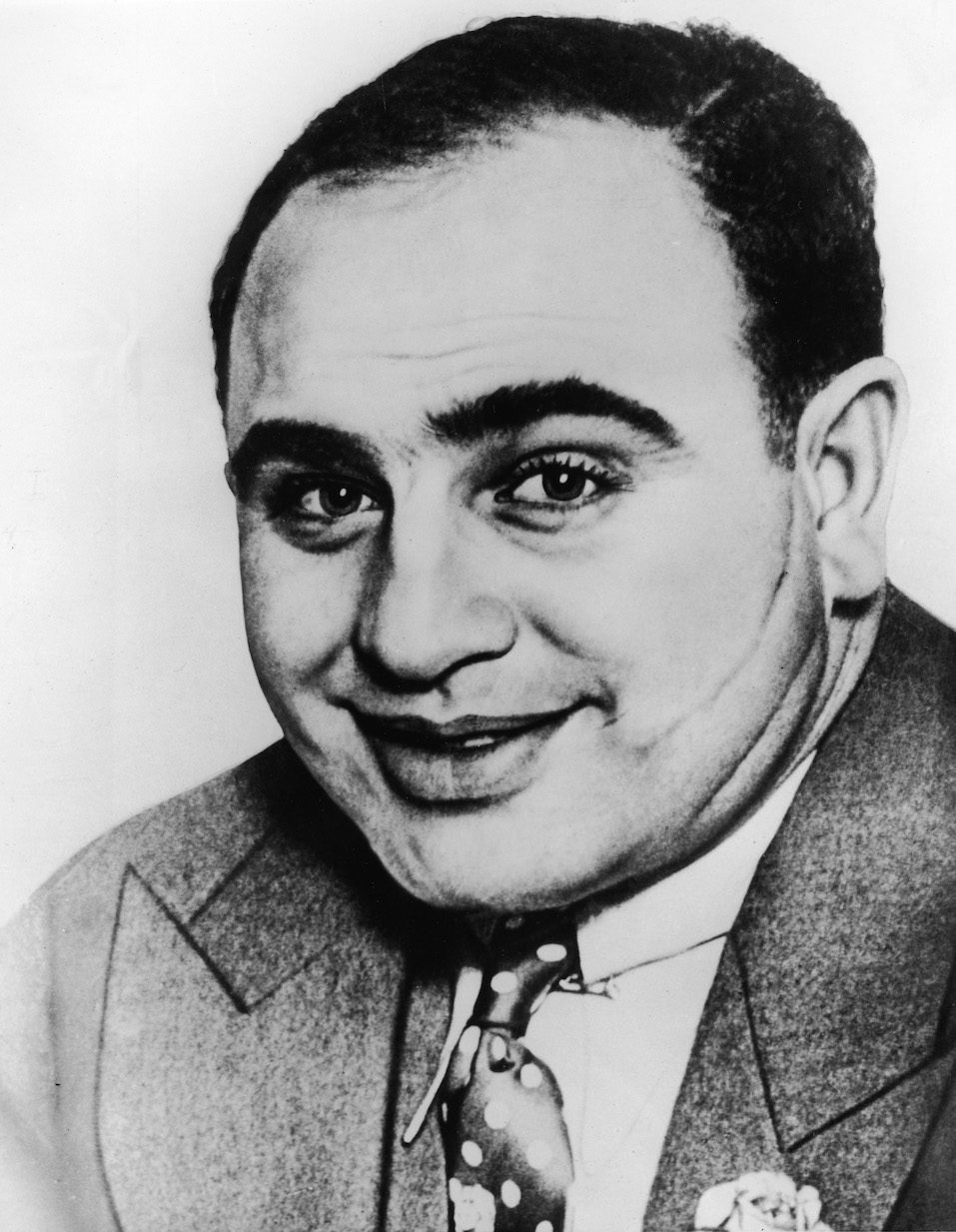 One of the most notorious criminals ever. | Hulton Archive/Getty Images

Whether you know him as “Public Enemy No. 1” or “Scarface,” the infamous gangster amassed a multi-million dollar fortune through bootlegging, prostitution and gambling during the Prohibition Era. Capone is allegedly responsible for the Saint Valentine’s Day Massacre in 1929 and attempted murder on Bugs Moran, head of the North Side Gang.

While he wasn’t indicted for his racketeering, Capone served six-and-a-half years for income-tax evasion. He was released and later died in Miami in 1947. 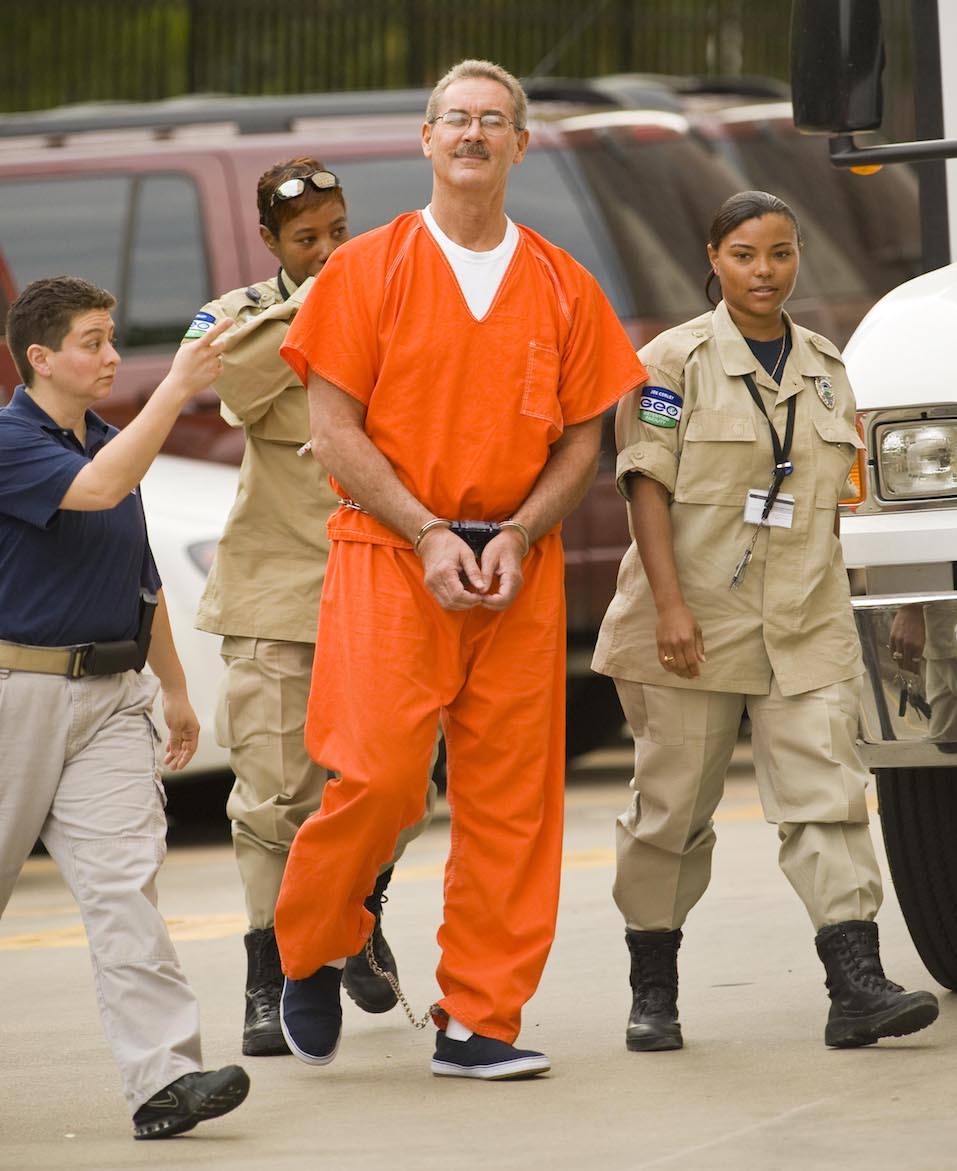 In 2012, the American billionaire was found guilty of a $7-billion Ponzi scheme, money laundering, and obstruction of justice, The Telegraph reports. Federal agents raided Stanford Financial offices in 2009. The Security Exchange Commission charged Allen Stanford with “massive ongoing fraud” in 2009 and he was sentenced to 110 years in prison. He is currently serving his time at the United States Penitentiary, Coleman in Florida.

“I didn’t do anything wrong,” Stanford told the BBC in 2016, “Will I apologize? No. Mark my words… I am going to walk out the doors of this place a free man.”

Next: She was the ‘Queen of Mean’ with an ironic conviction. 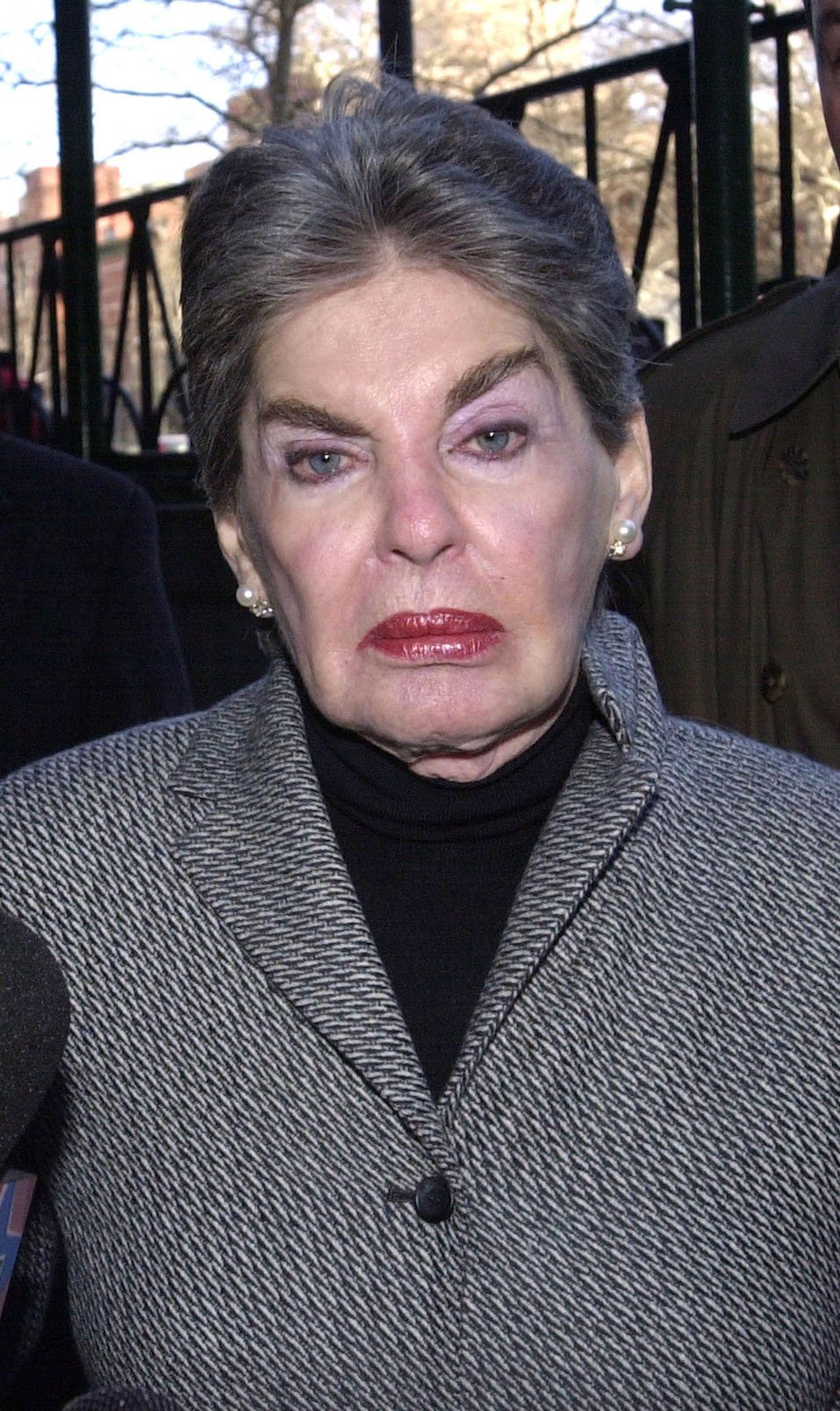 “The Queen of Mean” called taxes something “Only the little people pay,” and then received 16 years in prison for tax offenses. Her prison sentence fittingly began on April 15th (Tax Day). Leona and her husband accumulated famous New York City real estate including the Empire State Building and Flatiron Building in their heyday.

Rudy Giuliani, a U.S. Attorney back in 1988, indicted Leona, her husband, and two of their associates on tax charges, including extortion. The Helmsleys were accused of using money from their real estate empire to stock their Connecticut summer home with luxuries like a $1 million marble dance floor and a $45,000 silver clock.

Next: He was dubbed ‘titan of the cocaine industry’ and made a fortune to prove it. 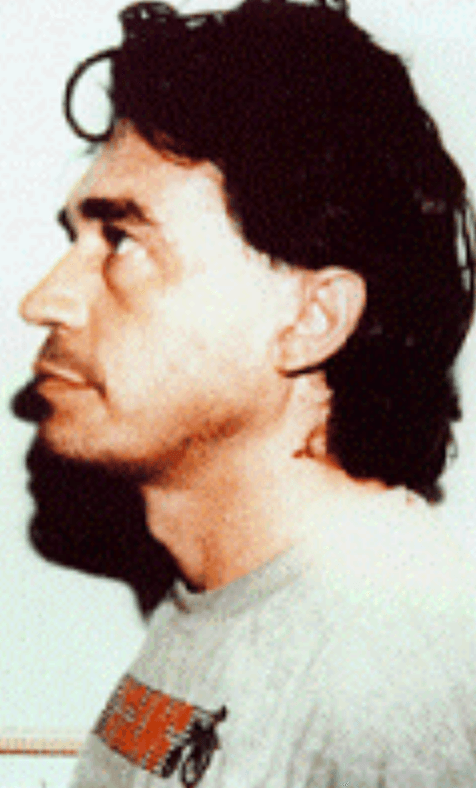 He is still in prison. | Drug Enforcement Administration/Wikimedia Commons

The Medellin Cartel co-founder and drug lord began a life of crime dealing stolen cars, marijuana, and eventually cocaine. A “titan of the cocaine industry,” Lehder oversaw “legions of gunmen, racing boats, airplanes, a ranch with a racetrack and even his own small neo-fascist party.”

There are multiple theories about Lehder’s capture, including that his own cartel wanted him out of the picture, and that Pablo Escobar himself provided the police with Lehder’s location. Lehder was tried and sentenced to life without parole plus 135 years, which he got reduced to 55 years total in 1992. Lehder remains imprisoned in the U.S.

Next: The fourth-richest criminal controlled 70% of this illegal business at one point. 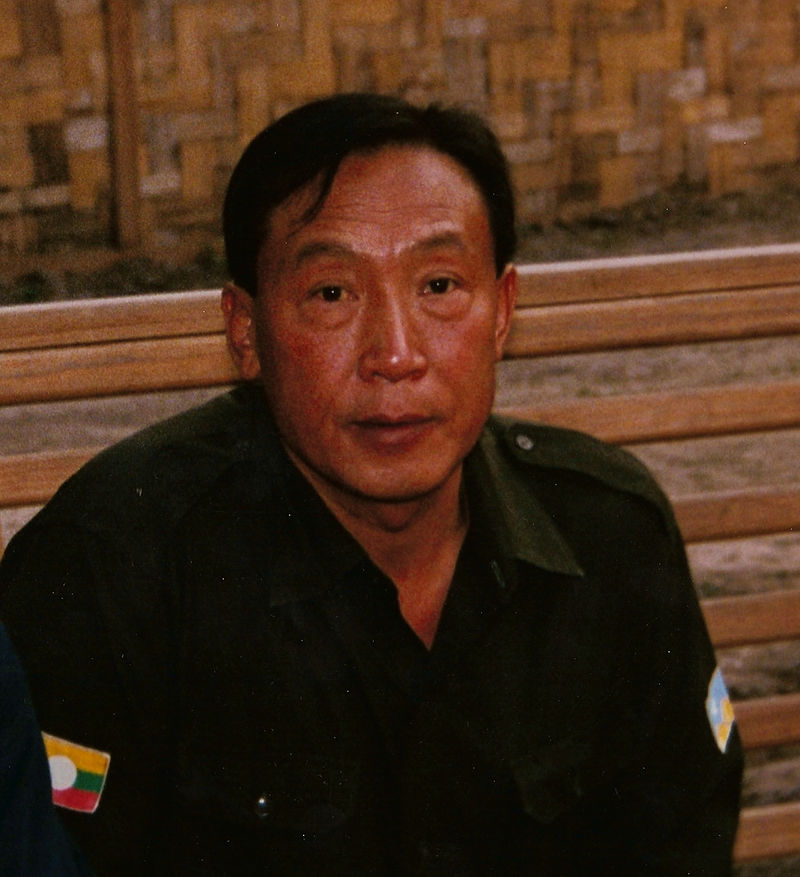 He died of unknown causes in 2007. | Stephen Rice/Wikimedia Commons

Khun Sa, known as a “publicity-loving Golden Triangle drug lord,” headed opium trafficking from 1974 to 1994. During this time period, he controlled an estimated 70% of the Golden Triangle’s heroin business. He used the money to build an army and large-scale heroin laboratories.

Khun Sa’s empire traded opium for guns to gain control over large parts of the Shan region. Khun Sa was a guerrilla leader and self-dubbed “King of the Golden Triangle.” He surrendered to the Burmese authorities in 1996 under the condition that he received government protection. He died of unknown causes in 2007 at age 73.

Next: The billion-dollar criminal tried to appeal to another billionaire’s emotions to be released.

He ‘dared’ President Trump to pardon him. | U.S. Department of Justice via Getty Images

Bout was convicted of conspiracy to kill U.S. officials and aiding the terrorist organization FARC. He was also charged with the wire fraud and money laundering that experts anticipate helped him amass his billion-dollar fortune.

Bout was sentenced to 25 years minimum in 2012. The 2nd U.S. Circuit Court of Appeals in New York rejected his contention. In 2014, Bout hired former U.S. Attorney General John Ashcroft to represent him in a new trial to overturn his conviction. As recently as 2016, Bout “dared” then-President-elect Donald Trump to pardon him if he took office.

Next: His billions helped him pay for the appearance-altering surgery that killed him. 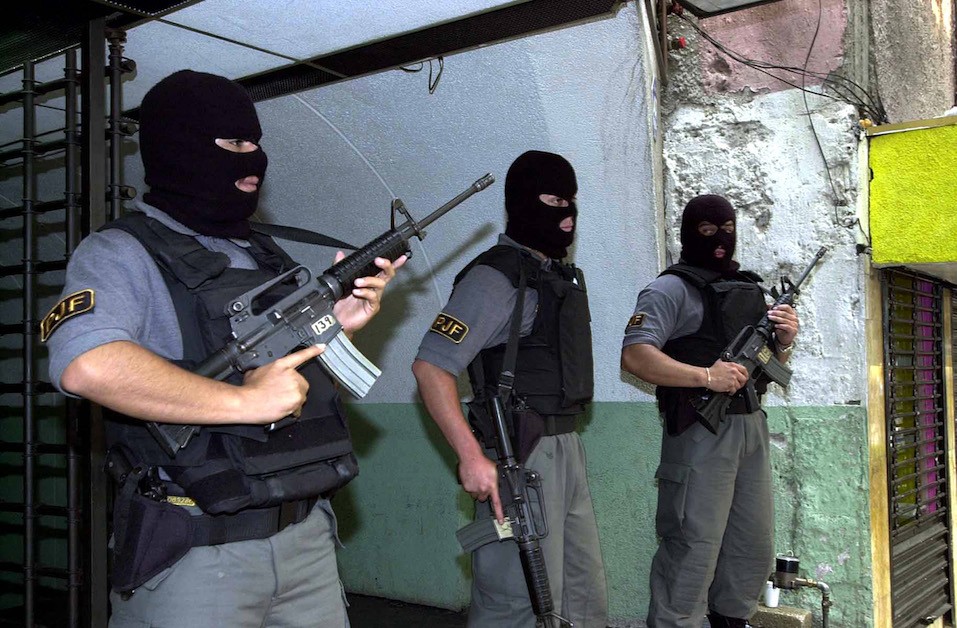 Mexican police stand guard after a raid on one of Fuentes’ businesses. | Susana Gonzalez/Getty Images

Allegedly the second-richest drug lord, Amado Carillo Fuentes worked with infamous drug kingpin Pablo Escobar to smuggle cocaine and other drugs from Columbia into Mexico and the U.S. Fuentes built a multibillion-dollar drug empire and made an estimated $25 billion-plus in revenue from his illicit activities.

Fuentes evaded the DEA his entire life. In 1997 he died from an alleged eight hours of extreme plastic surgery to alter his appearance. The plastic surgeons who operated on Fuentes were found dead afterward — encased in concrete inside steel drums — and reportedly showed signs of torture.

Next: The richest criminal of all time. 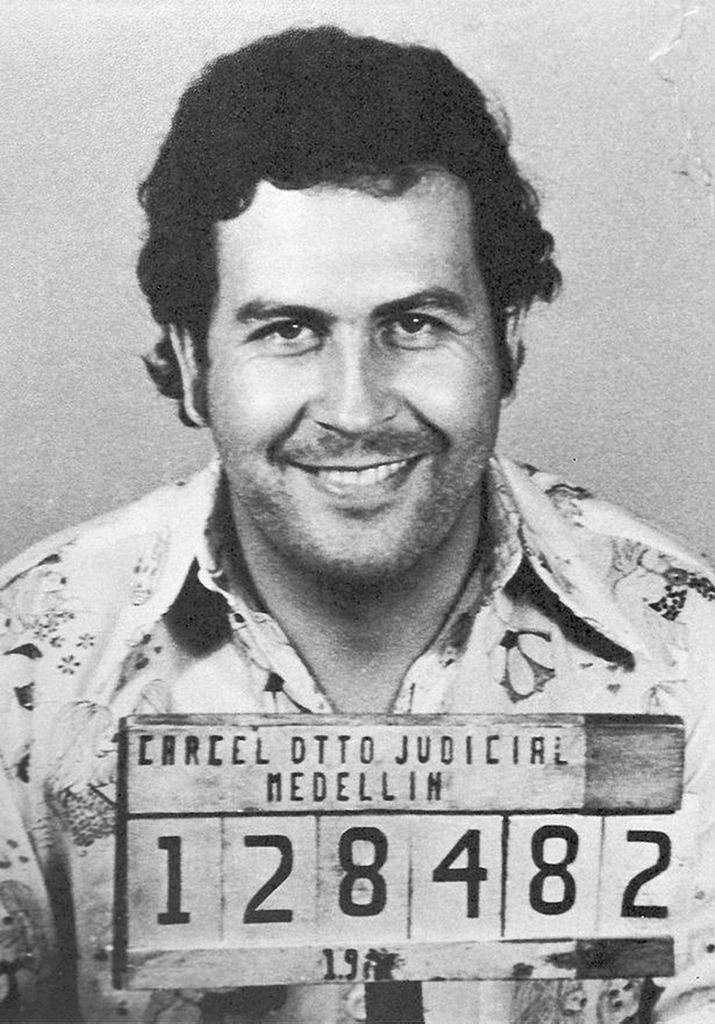 His fortune was probably in the billions, but it’s impossible to know for sure. | Colombian National Police/Wikimedia Commons

The “King of Cocaine” became one of the richest people in the world by the time he turned 35. It’s impossible to verify how much Escobar made in total, but its estimated to be nearly $30 billion. He brought in an estimated $420 million a week smuggling in an estimated 80% of the U.S. cocaine supply in the 1980s.

Forbes estimated Escobar’s personal net worth at $3 billion in 1989 as one of the “World’s Top Billionaires,” recognizing that not all of them made their money legally. Escobar bought various residences and safe houses with his wealth. He escaped La Catedral, his personal “luxury prison” and spent the rest of his life evading the authorities. He died in a shootout 16 months after his escape.