There’s a complicated relationship between ESPN — the biggest sports network on television — and money. For example, almost every cable-subscribing household gets the network (and its many offshoots). But fewer and fewer people actually want it. In fact, a lot of people would choose to drop it from their package if it saved them a few bucks. As newer technology actually allows people more options for cable packages, plenty of people are dropping it.

The result? ESPN is struggling, and Disney is scrambling to find a fix. Once a cash cow, ESPN has become bloated, and that prompted the mass firings of many personalities, reporters, and anchors last year.

Still, the network has many highly paid anchors and personalities on staff. It’s necessary, to some degree, to keep viewers engaged with recognizable faces and the best sports journalists around. But as we’ve seen, even an immensely popular network can find itself in need of a diet. The following list contains many of ESPN’s highest-paid employees, though it’s not exhaustive. Also, note that the contracts are not publically available for these people, in almost every case.

With that in mind, these are some of ESPN’s highest-paid personalities. 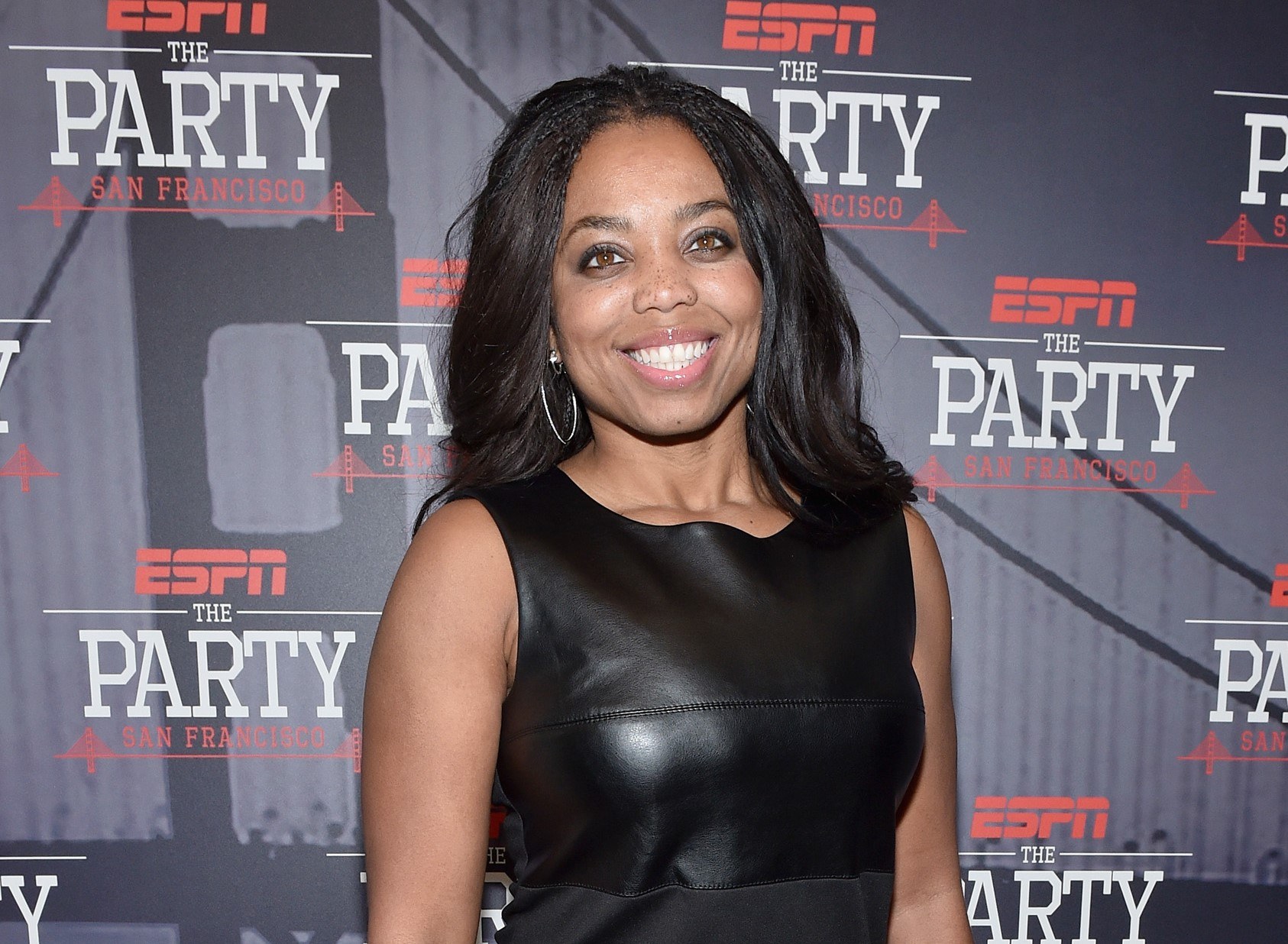 She has been suspended with pay. | Mike Windle/Getty Images for ESPN

Love her or hate her, SportsCenter anchor Jemele Hill is well compensated for her time. It’s estimated that she earns more than $1 million per year, and even though she was suspended recently by her employer that suspension was with pay. Hill has been playing with fire lately, but so far, it hasn’t burned her bank account.

Next: A woman who’s been with ESPN as long as anyone. 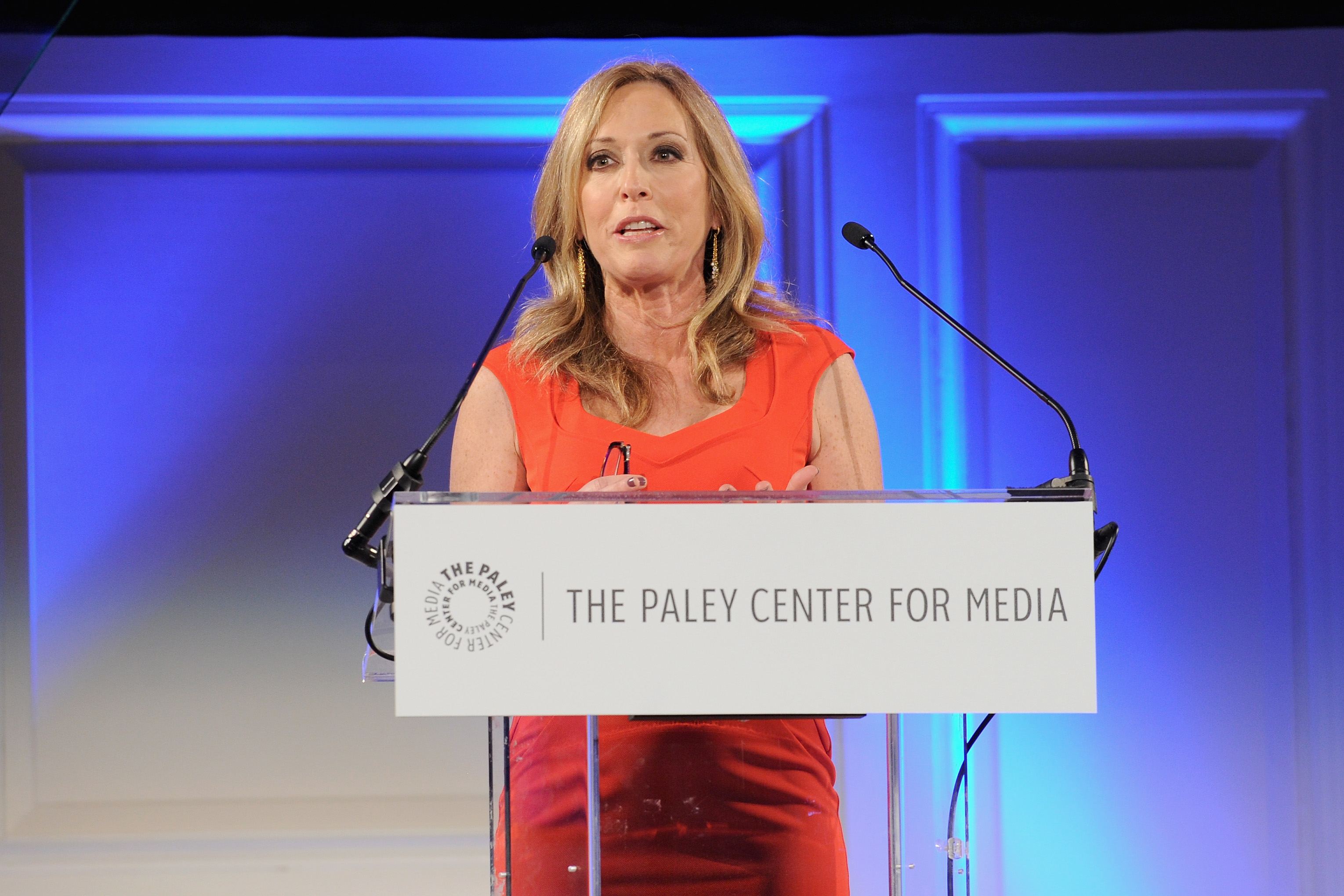 She’s been with the network since 1992. | Bryan Bedder/Getty Images for Paley Center for Media

Linda Cohn is one of the network’s most legendary anchors and personalities. She’s been with ESPN for more than a quarter-century now, and all the while has earned a good amount of money. We don’t know the details of her contract (as is the case for almost all of the network’s employees), but she is worth more than $8 million.

Next: One of ESPN’s current tentpole anchors. 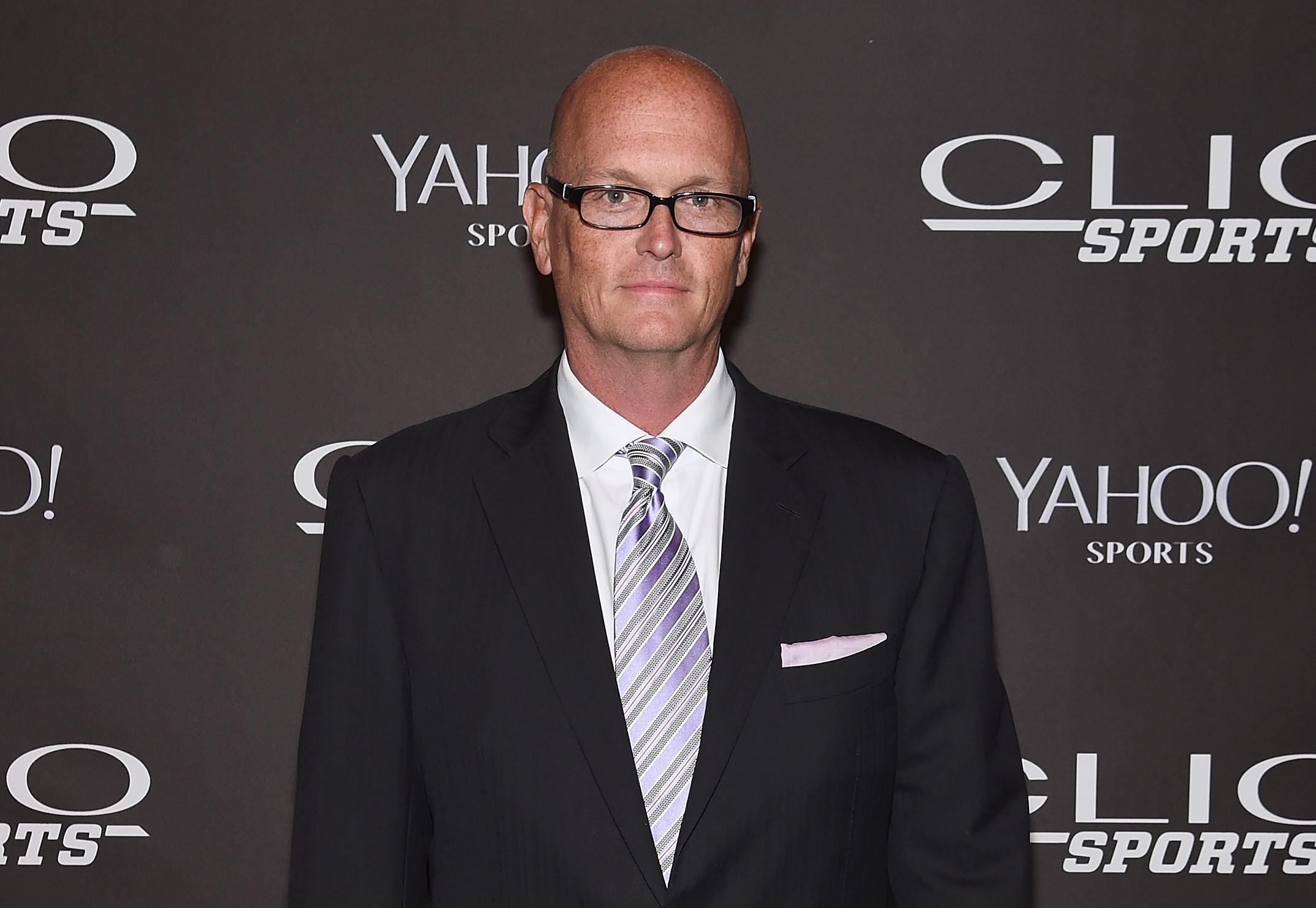 You know Scott Van Pelt because of his iconic look — a bald head with thick glasses. He’s also one of ESPN’s big-time anchors these days. As a result, he earns a decent salary. He recently signed a new contract, though the details are scant. He reportedly earns more than $4 million per year and has a net worth of $16 million.

Next: The man known as “Boomer.” 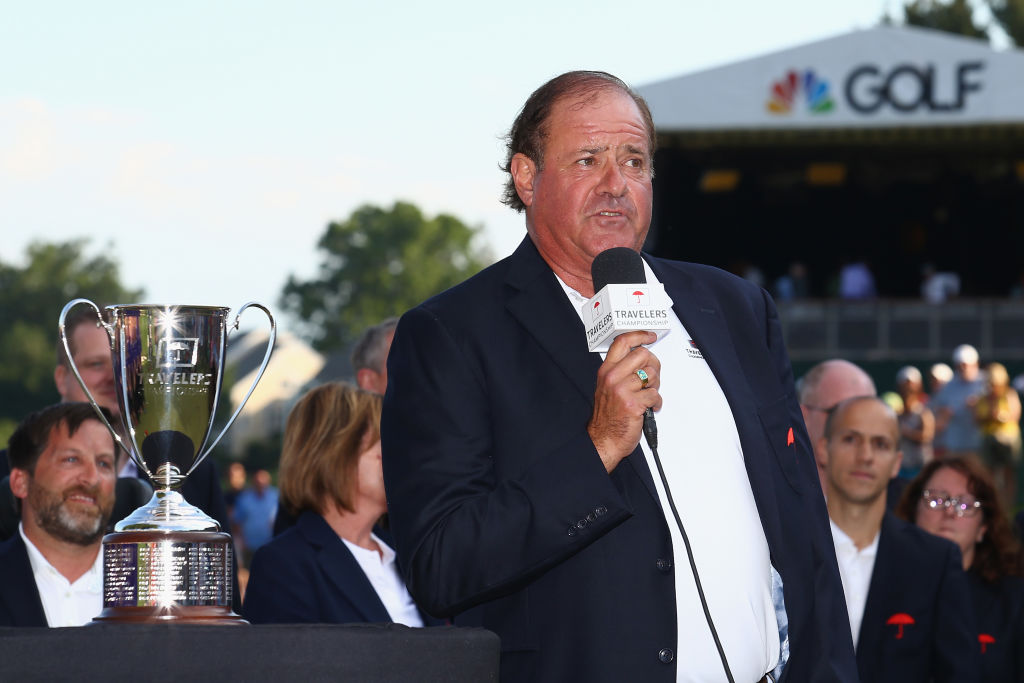 He’s one of the most recognizable personalities out there. | Tim Bradbury/Getty Images

Berman, or “Boomer”, has been an ESPN mainstay since 1979. He’s best known for hosting Sunday NFL Countdown and SportsCenter, but given ESPN’s recent troubles, he’s been downgraded significantly. And so was his salary. Prior to ESPN’s cutbacks, Berman was earning around $3 million per year. Now? We aren’t sure, but it’s not nearly as much. All told, though, he’s worth $20 million.

Next: This ESPN host is worth around $4 million. 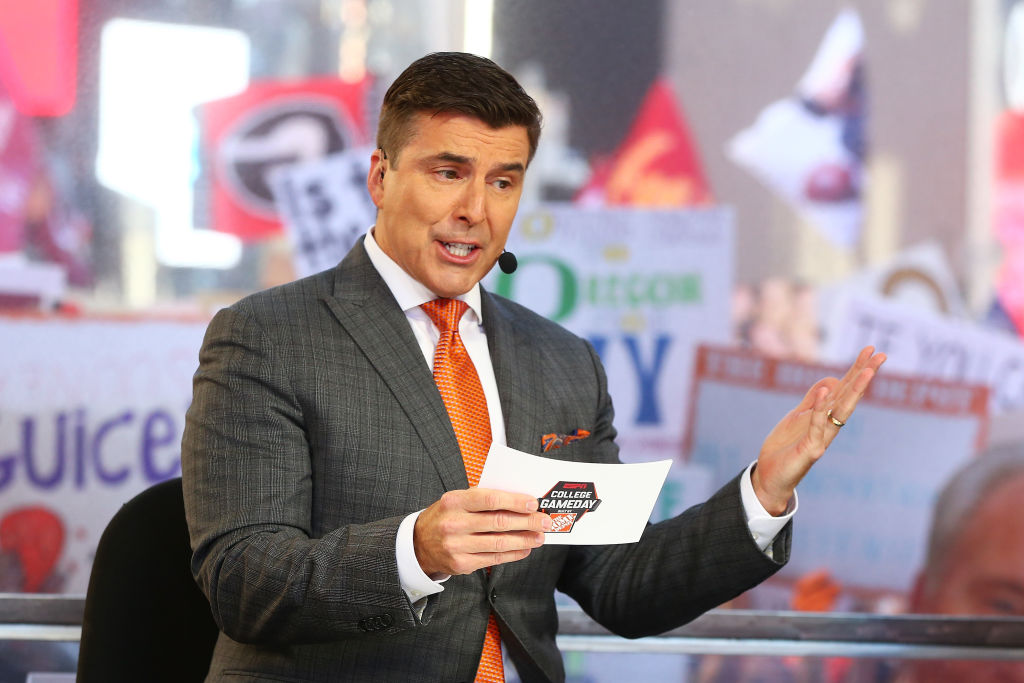 He’s got a contract through 2023. | Mike Stobe/Getty Images

If you’re a college football fan, you’re well acquainted with Chris Fowler’s work. He has been a mainstay on College Gameday, ESPN’s flagship college football show, for years. Until recently, that is. Fowler signed a new contract and has moved on to covering other sports, with Rece Davis replacing him. Fowler’s net worth is estimated to be around $4 million.

Next: A man people love to hate. 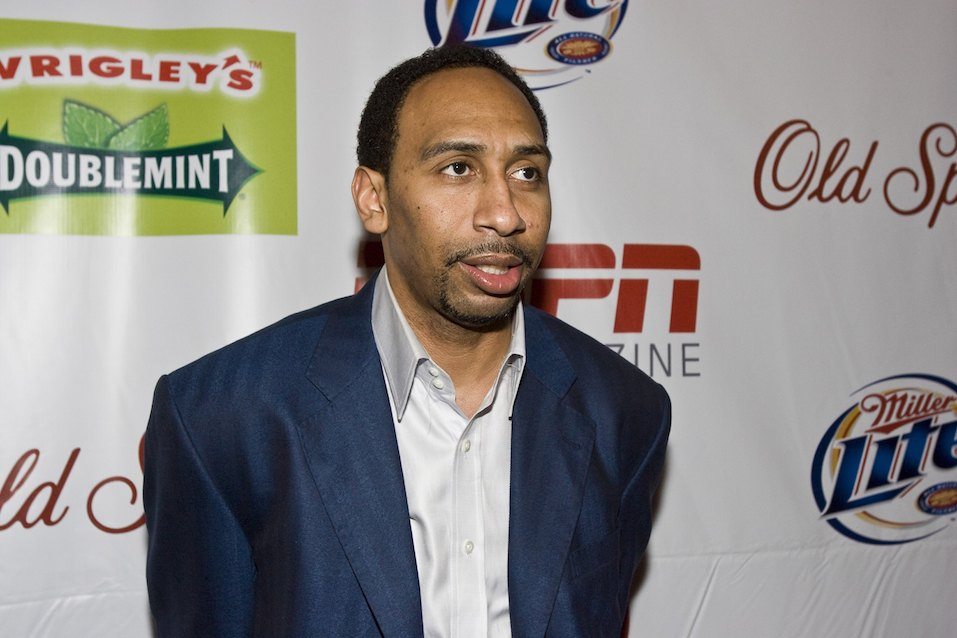 He makes over $3 million a year. | Skip Bolen/Getty Images

Viewers tend to either love or hate Stephen A. Smith — there isn’t much wiggle room. No matter how you feel about him, though, he makes a ton of money. In 2015, Smith signed a contract paying him between $3.1 and $3.5 million per year. But that’s evidently not enough. News that Smith recently changed agents to get “Skip Bayless money” recently made the rounds.

Next: He may not be a household name, but he earns quite a bit of money. 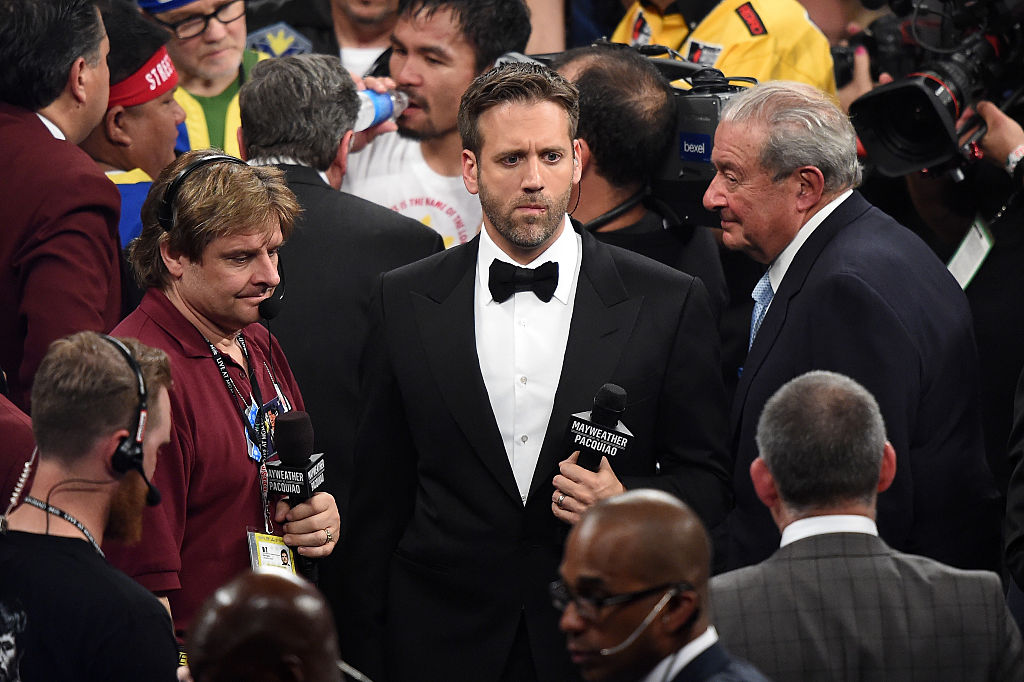 Boxing specialist Max Kellerman had a tough task ahead of him a couple of years back: Replace Skip Bayless, one of ESPN’s top personalities. He’s managed to do it, taking over the show First Take, and running with it. He’s an Ivy League-educated New Yorker, and that clearly resonates with ESPN’s fanbase on some level. We don’t have salary data, but estimates put Kellerman’s total net worth at around $8 million.

Next: Mike and Mike fans, get ready. 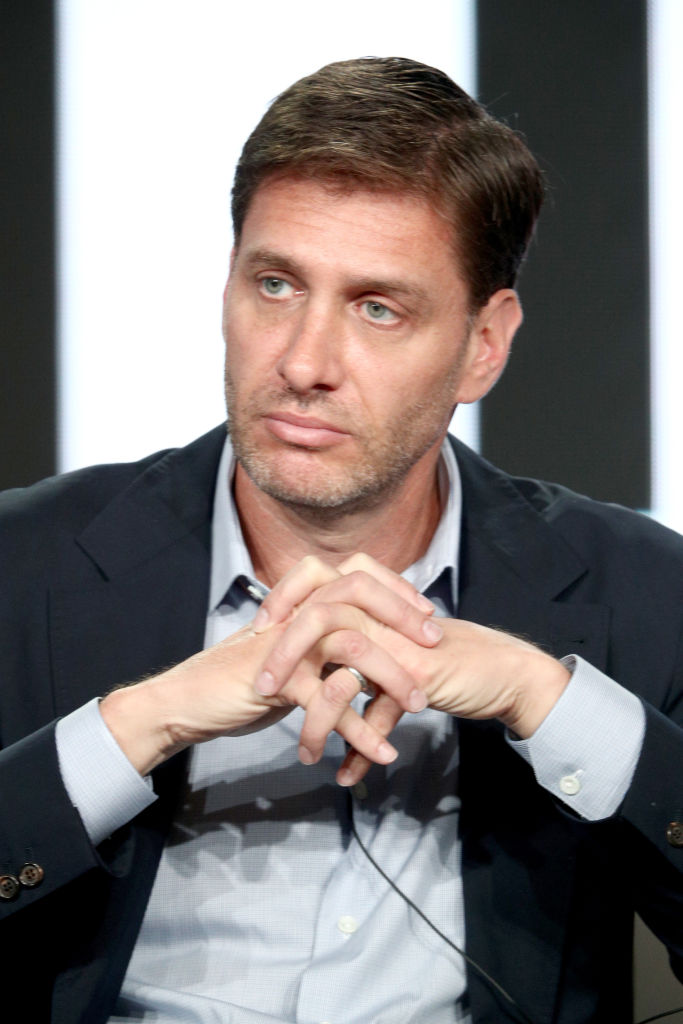 He was making big money for his radio show. | Frederick M. Brown/Getty Images

“Greenie”, as he’s commonly known, was one of the hosts of the long-running radio show Mike and Mike. But the show came to an end in late 2017, when Greenberg signed a new contract for an ESPN TV show. That new contract? It reportedly pays him a whopping $6.5 million per year. This makes him among ESPN’s most expensive personalities.

Next: The other Mike 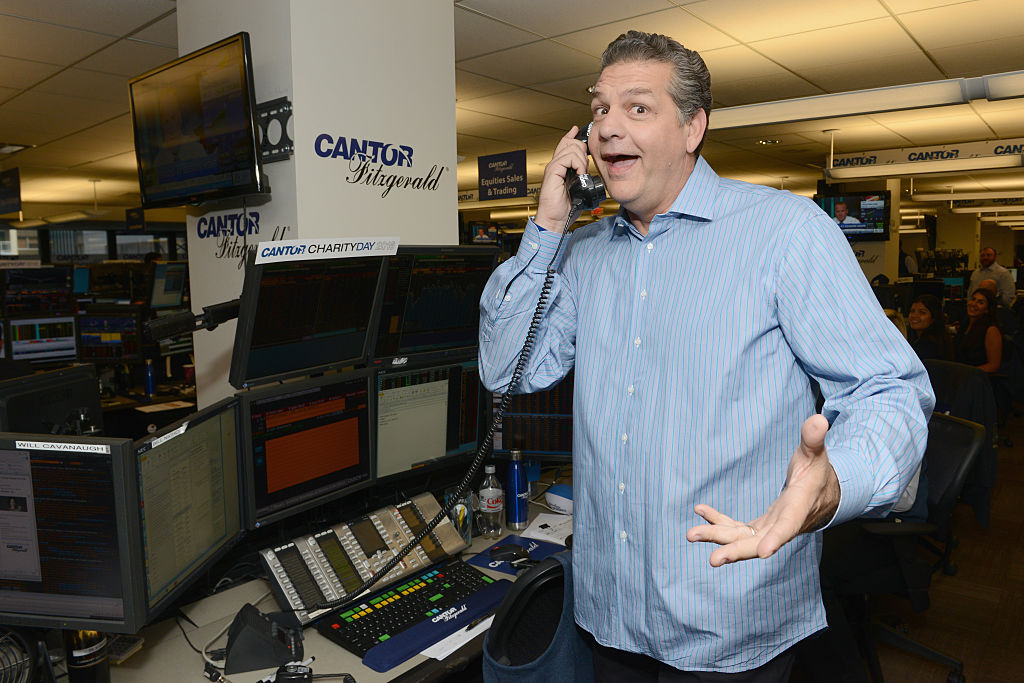 The other Mike is also still working for ESPN.  | Noam Galai/Getty Images for Cantor Fitzgerald

The other half of the Mike and Mike break up, Golic is also set to keep earning a hefty salary from ESPN. Though his partner signed on for a big new salary and TV show, Golic wasn’t left behind. ESPN resigned Golic to keep him within the network’s family. We don’t know what he’s getting paid, exactly, but we do know that he’s worth quite a bit — estimates put his net worth at around $15 million.

Next: The man who made more than anyone — until very recently.

Mike Tirico’s partner-in-crime on Monday Night Football, Jon Gruden is now the new coach for the Oakland Raiders (soon to be Las Vegas Raiders). But before he left, he was, reportedly, ESPN’s highest-paid on-air personality. According to reporter James Miller, Gruden was pulling in $6.5 million per year working at ESPN. The Raiders, however, made him an offer he couldn’t refuse — $10 million per year for 10 years.

Next: From pro to college ball. 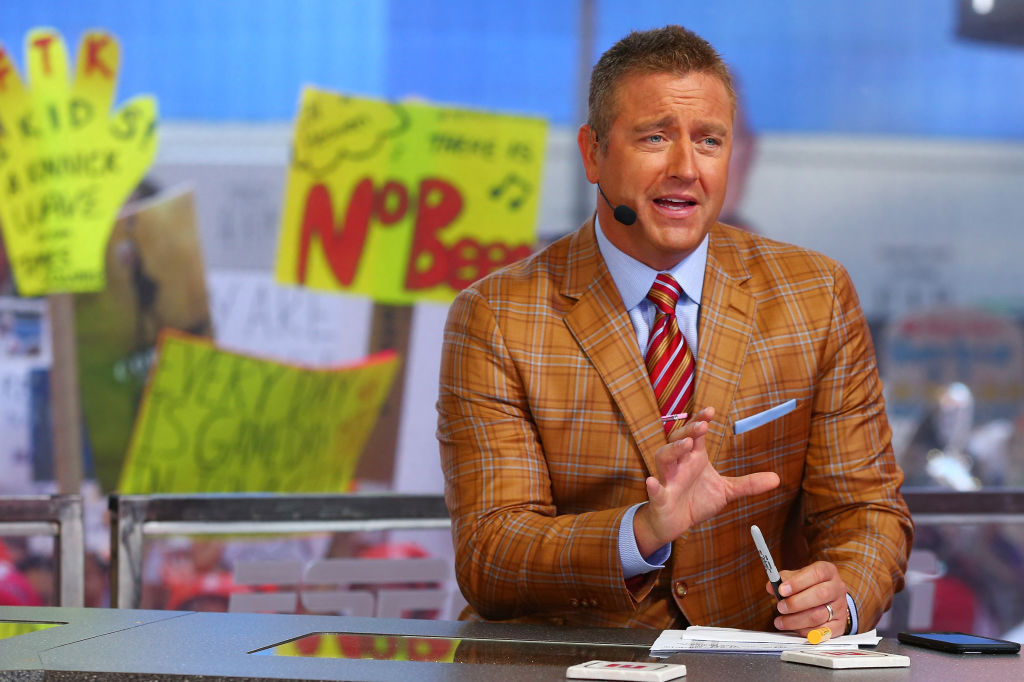 He net worth is around $2 million. | Mike Stobe/Getty Images

Herbstreit is another very familiar face and one that most people recognize from College Gameday on Saturday mornings. He’s made a small fortune talking college ball with Lee Corso and the crew, and while we don’t know his exact salary figures, we do know that his network has made sure he’s not going anywhere for a while. His net worth is estimated at $2 million.

Next: The new host of College Gameday 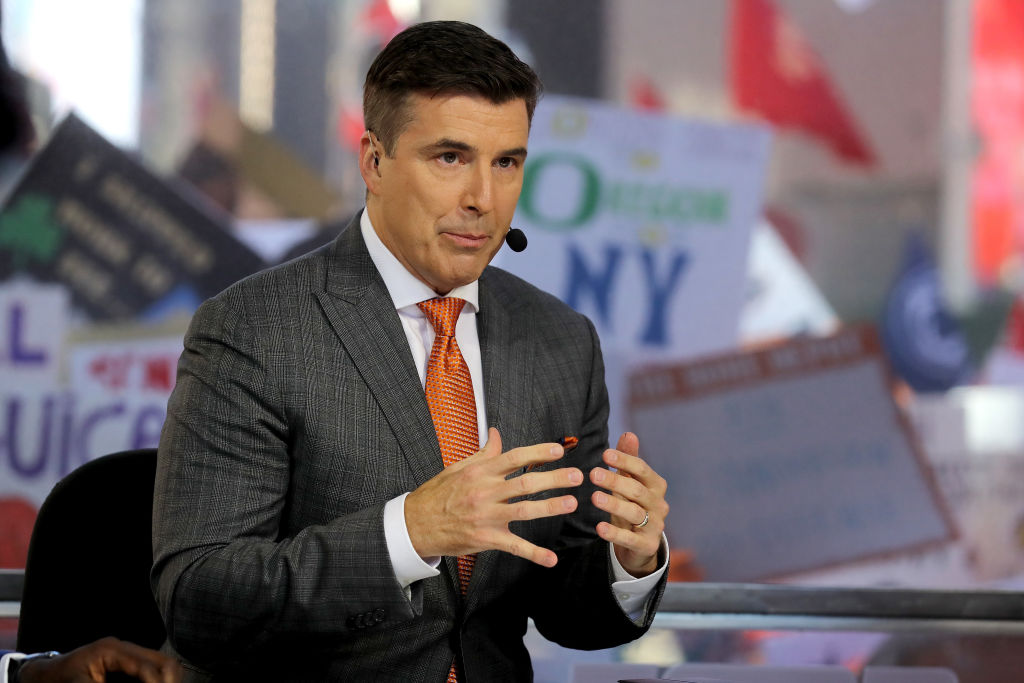 Davis has been with the network for years. | Abbie Parr/Getty Images

Rece Davis has been in the ESPN fold since the mid-90s and most recently took over for Chris Fowler as the host of College Gameday — sitting alongside Kirk Herbstreit. Like others on our list, Davis’ time at the network has been financially rewarding. We don’t know his salary and contract details, but his net worth is estimated at $3.5 million.

Next: Another long-time SportsCenter anchor. 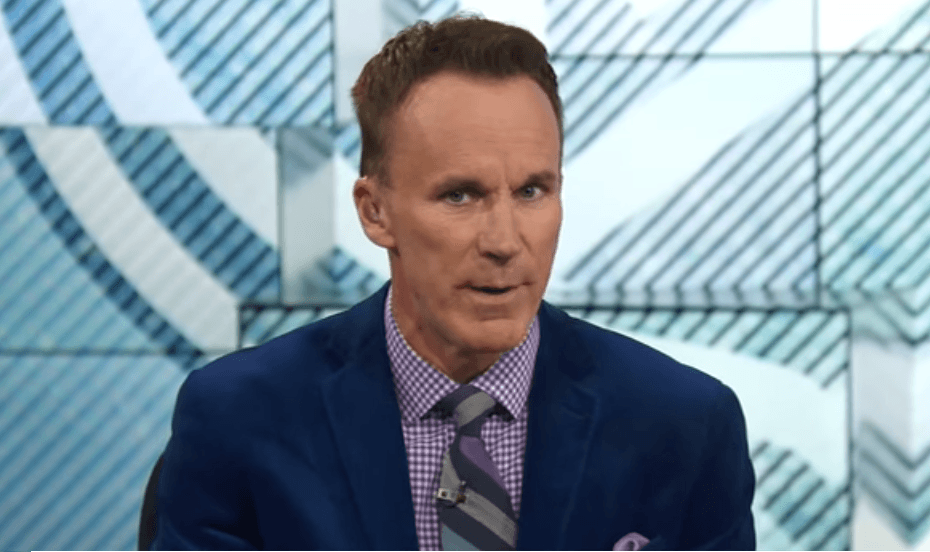 His net worth is in the millions. | ESPN via Youtube

While he never had the star power of a Dan Patrick or Stuart Scott, John Buccigross is one of those ESPN anchors that has a calming sense of familiarity. That’s probably why the network has kept him around for so long. Buccigross’ net worth is estimated in the millions, though we don’t have an accurate count. It’s worth noting too, that Buccigross has also been the center of controversy as leaked texts wrapped him up in a sexual harassment scandal.

Next: Back to college ball. Basketball. 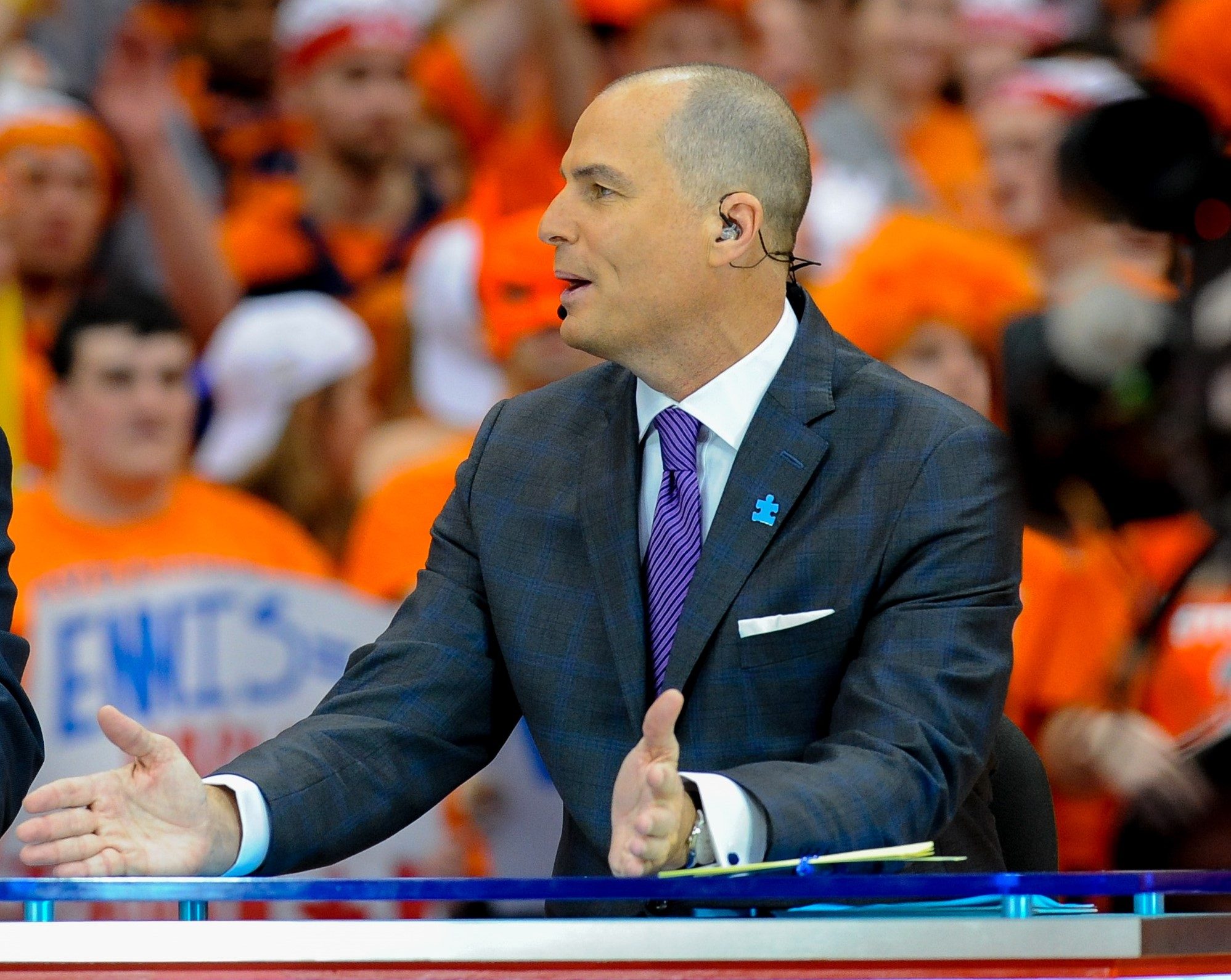 ESPN has no shortage of college sports experts on staff, and that includes Jay Bilas. Bilas is a college basketball wizard, and he’s someone people listen to — particularly when March rolls around. And, once again, we don’t have exact figures on how much Bilas is pulling in, but it appears he has around $4 million piled up.

Finally: One of the best sideline reporters in the biz. 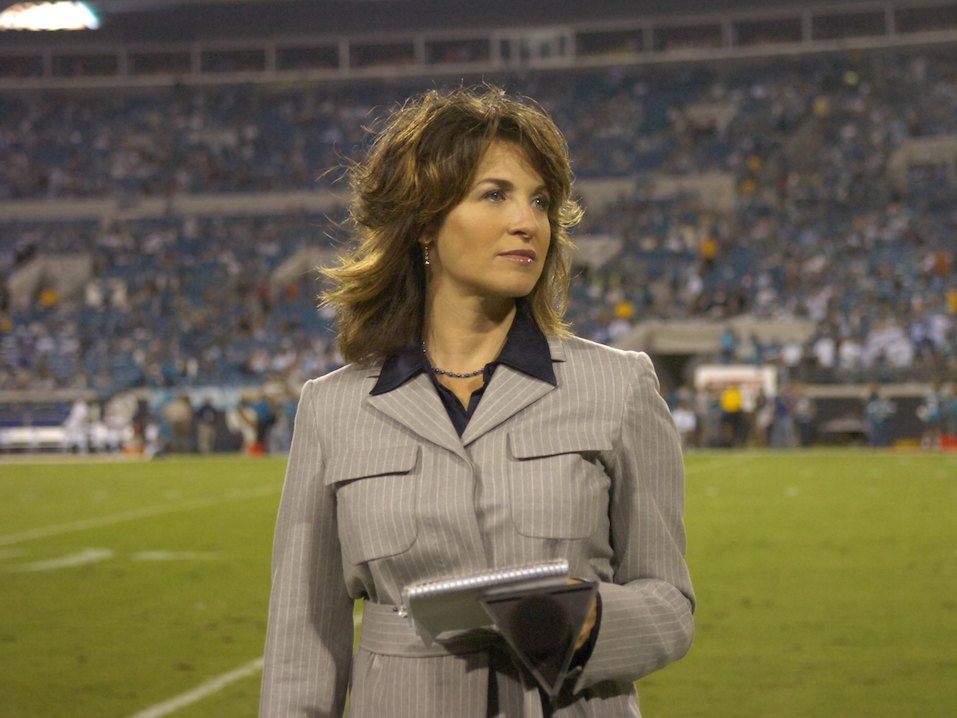 Kolber is a top reporter for the NFL. | Al Messerschmidt/Getty Images

One of the absolute best in the business, Suzy Kolber has made an insane amount of money as an ESPN reporter and correspondent. The figure we were able to track down is $18 million — but we can’t be absolutely sure. She’s been a mainstay in the sports journalism world for decades, though, so it’s not unreasonable to think that she’s one of the wealthier personalities in the industry.