Should This Recession-Like GDP Growth Worry You? 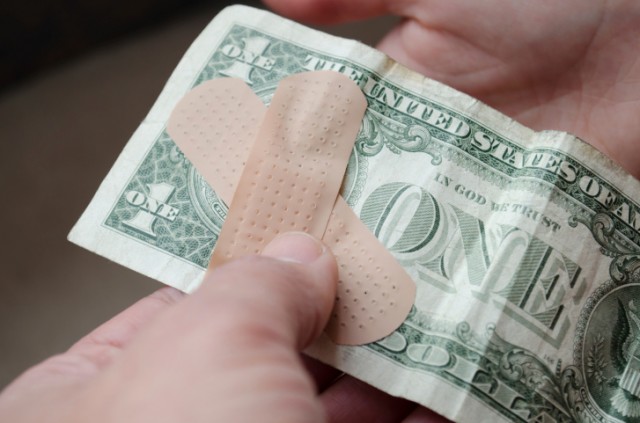 At first look, economic growth was in positive in the first three months of the year; in April, the initial calculation of GDP growth showed the U.S. economy expanded at an anemic 0.1 percent rate — a far slower pace than the 1.2 percent expected by economists and a significant decline from the 2.6 percent rate of growth recorded in the final three months of 2013. But late last month, government economists announced that in the first-quarter of 2014, U.S. economic output had not expanded, but contracted at a worse-than-expected 1 percent annual rate. That was the first negative growth posted in three years. Now, the second and final revision of gross domestic product — the broadest measure of economic activity — revealed that economic growth in the first-quarter slowed to a 2.9 percent annual rate.

That pace represents the fastest decline in GDP growth since the 5.9-percent drop recorded in first-quarter of 2009 — during the Great Recession. The difference between the previous revision and the final figure is the largest on record. Comparatively, economists had expected this revision to show a 2-percent drop. 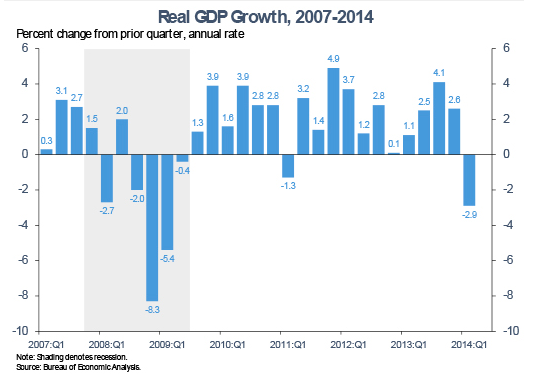 Why Was Growth Negative in the First-Quarter? 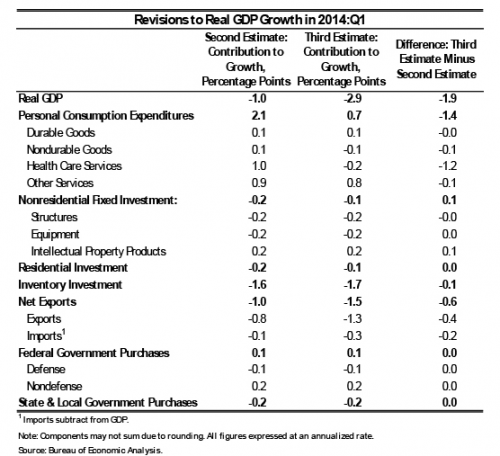 Economists still blame the winter’s exceedingly cold weather for much of the first-quarter’s economic difficulties — although it will not be until the Commerce Department release the second-quarter’s GDP figure that it will be clear structural problems did not play a role. Using “more complete source data” than was available for the previous two calculations, the Bureau of Economic Analysis determined that the increase in consumer spending, called “personal consumption expenditures” in the report, was smaller than originally calculated and the decline in U.S. exports was larger than initially estimated.

The decrease in real GDP in the first-quarter primarily reflected negative contributions from nearly all major categories — business inventory investment, trade, both residential and nonresidential fixed investment, and state and local government spending — which suggested that economic malaise was wide spread. Essentially, personal consumption expenditures were the only positive contribution to growth, although federal government consumption expenditures and investment did increase 0.6 percent, following the fourth-quarter’s 12.8-percent decrease. At the state and local government level, spending decreased 1.7 percent.

Yet, even in the consumer spending metric — which accounts for approximately 70 percent of GDP — there was evidence of the deep financial scars left by the recession. The earlier revision of GDP growth put the growth of personal consumption expenditures at 3.1 percent, which was a decrease from the 3.3 percent increase recorded in the fourth-quarter of last year. But Americans spent less on healthcare services and on discretionary spending in the first three months of the year, and consumer spending growth was downwardly revised to a meager 1 percent.

Consumer spending was supposed to be the bright spot in the recovery narrative. Before the downward revision, the significant increase in first-quarter consumer spending was seen as good news for an economy dealing with decreasing government spending, the early 2014 slowdown of the housing market, and months of worse-than-usual winter weather. But the final revision of GDP growth showed Americans are generally still hesitant about increasing expenditures beyond everyday necessities, keeping sales weak for a number of industries. Consumer caution has left businesses equally cautious regarding investments, especially in new employees. The good news is that the Commerce Department upwardly revised corporate profits. In May, the second GDP revision showed profits ticked down 1.3 percent to a seasonally adjusted annual rate of $1.880 trillion. However, U.S. corporations actually saw profits tick up a meager 0.1 percent. Slow economic growth is not expected to continue, but if it does, corporate profits will be hurt.

Thanks to the cold winter weather and increasing mortgage rates, the housing market began 2014 slowly; residential investment — a segment of GDP that includes spending on home construction, improvement and broker’s commissions — dropped 4.2 percent in the first-quarter, a slight improvement from the 5 percent decline calculated in the first GDP revision.

Further, slow growth in business inventories was the unfortunate — but expected — side effect of the big buildup in private inventories in the third quarter of 2013, which boosted economic growth at the end of the year. With consumer spending too slow to bring down those inventories substantially, businesses were left with a hangover of unsold inventory that weighed on first-quarter economic output. Inventories subtracted 1.70 percentage points from GDP growth, a slight drop from the previous estimate of 1.62 percentage points.

What Does This Larger Contraction Mean for the Economic Recovery?

This adjustment of first-quarter GDP growth put economic growth more firmly in negative territory, and the 2.9-percent contraction is weak even for an economy where normal growth is below 3 percent. The good news is that the economic contraction of the first three months of the year is not seen as the beginning of a new trend. The temporary downturn fits within a pattern seen throughout the economic recovery. Since the recession ended nearly five years ago, GDP very rarely achieved what economists call ideal growth.

Looking back to the first-quarter of 2009, when GDP decreased 6.4 percent, recent data shows the extent to which the economy has rebounded, even if the recovery has both failed to improve consistently and remained slowed by historical standards. On average, the United States economy has grown at an annual rate of 3.3 percent since 1929. Generally, economists say a healthy rate of growth for GDP is between 2 percent and 4 percent. GDP growth fell just within that range in the final three months of last year, but the first quarter posed another setback. The uneven nature of the economic recovery can been seen in the ongoing weakness of the labor market, where high levels of joblessness has persisted even if the unemployment rate has ticked down, and in the housing market, where growth slowed over the winter.

Uneven economic growth may be the new normal for the United States, but Thursday’s revision of first-quarter GDP growth is nonetheless a disruption of the recovery — a recovery that always appears to be just out of reach. Yet, even though “GDP was recession-like” in the first-quarter, as High Frequency Economics chief U.S. economist Jim O’Sullivan wrote in a research note obtained by The Washington Post, “most other data clearly signal that the decline is an outlier.” Early economic reports from the second-quarter suggests that economic growth rebounded, with warmer weather likely releasing some pent-up demand. One key metric, job creation, improved greatly in April. In May, the fourth consecutive month in which job creation surpassed 200,000, U.S. employers expanded payrolls by 217,000 jobs. The U.S. labor market is far from healed, but that month’s employment gains mean all the jobs lost during the recession have been recaptured, leaving employment at an all-time high of 138.4 million people.

Now, economists forecast the economy will grow at a 3.6 percent annual rate in the April through June quarter. Of course, thanks to the incredibly weak first-quarter, economic growth in the first six months of the year, will most likely come in below 2 percent — the average rate of GDP growth recorded by the economy since the United States emerged from recession in June 2009. ‘Recession-like’ is a word no one wants to hear describing economic growth. The Federal Reserve has already lowered economic growth forecasts for 2014, even though the central bank went forward with another decrease of its economic stimulus this month. The Fed expects GDP growth to fall between 2.1 percent and 2.3 percent, down from its previous prediction of nearly 3 percent.