Should You Buy a House or Invest in the Stock Market?

Let’s be honest: If you’re going to save your money and put off spending it until later, you really want to get as much out of that patience as possible. If you’re going to stash your earnings away somewhere instead of buying a new car or taking a vacation, that investment had better be worth it, right? When choosing a long-term investment strategy, many people end up picking between the option to buy a house or investing in the stock market. But how do you know which one will yield the most money in return?

Any financial advisor worth their paycheck will tell you that it’s pretty much impossible to predict market trends, for your stock portfolio or your real estate investment. However, a recent report from real estate company Redfin shows some interesting trends in both since the Great Recession.

Redfin, in a partnership with investment company FutureAdvisor, analyzed the average returns for 24 metro areas in the United States. The companies took a look at real estate appreciations in those metros from 2010 to 2016, along with the portfolio returns over the same time frame. In 20 out of the 24 metro areas, stock market returns were greater than the appreciation of real estate in those same markets.

The four exceptions, where the housing market appreciated more than stock portfolios, were in areas with notoriously hot real estate regions. Three of them were San Francisco, Oakland, and San Jose — all in the mecca of real estate for Silicon Valley and the outlying areas. The fourth was Miami.

Stock portfolios with greater returns since the recession 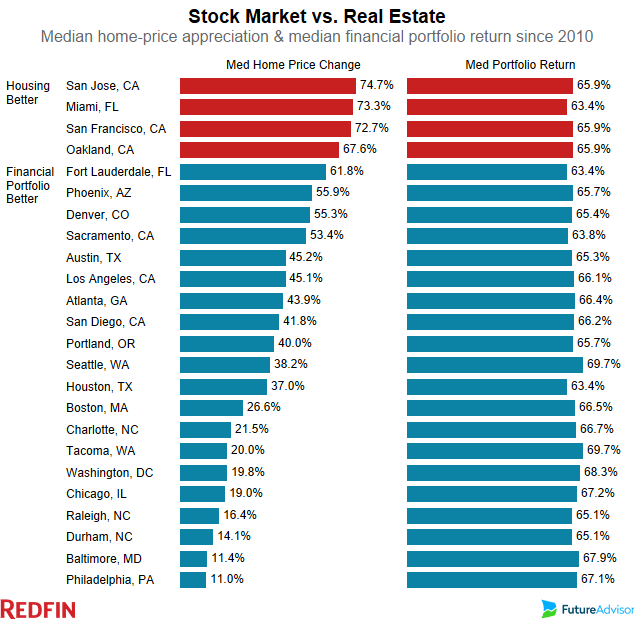 As you can see in the chart above, the differences in the return on investment (or ROI) are quite stark, depending on the metro area where you live. The housing markets have been particularly slow to recover since the recession in areas like Philadelphia and Baltimore, with low appreciations on home values as a result. Many people might have been more wise to put their extra dollars into another stock portfolio, since the returns were 50% higher or more in those cities.

With the exception of five metro areas, stock returns outperformed home appreciations by 10% or more in every other city over the past six years. The nine lowest-performing housing markets were outperformed by stock portfolios by 40% or more. That might not be enough evidence to build an entire investment strategy around, but it’s definitely food for thought when it comes to your savings plans. 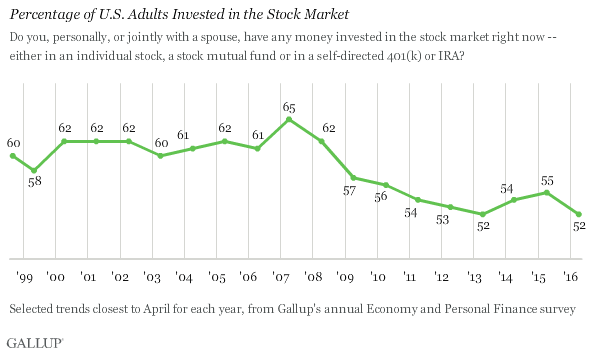 This might be good news for brokers, but not everyone is ready to jump on board with a range of stock options. According to Gallup, Americans are investing at the lowest rates in two decades, with just 52% of adults saying they’ve invested in the stock market. That’s tied with the rate of stock ownership in 2013 — the lowest in the 19 years since Gallup began reporting the figure.

Young people, in particular, are wary of the behemoth and fickle Mr. Market. After all, it’s the same system that slashed their 529 plans right before their first college tuition payment was due, and made it extremely difficult to find a job after graduation. That same Gallup report shows that from April 2007 to April 2016, the rate of stock owners ages 18 to 34 dropped by 14%, the biggest decline of any age group.

Housing’s still got it

A “for sale” sign stands outside a home in Pasadena, California | David McNew/Getty Images

The Redfin report is pretty clear in its conclusion, but it will likely take many similar reports before people start abandoning investments in real estate altogether. The dependability and healthy ROIs are backed by history, and conventional wisdom is tough to reshape. In general, real estate has long been regarded as a low-risk, high-yield way to diversify your investments.

One reason for this is that the housing markets have outperformed the S&P 500 for the past 40 years, as Investment News reminds us. If you’ve already placed a large sum in stocks, the best way to lower your risk of losing it all in some freak turn of the economy is to diversify. Buying a home — or a second one — is often an advisable way to do so. In fact, one financial advisor told CNBC he suggests placing 5-10% of your investment assets into real estate in some form.

Keep in mind, real estate often doubles as a personal investment, not just a financial one. You want the home you buy to appreciate over time, but you’re also likely choosing it to be the place you spend significant time in — whether that’s on your own, with a partner, or raising a family. Depending on your life goals, that can be far more meaningful than any portfolio you would otherwise have.

If you already own a home and you’d be looking to invest in a separate property, Redfin did provide some valuable input. According to their analysis, condos and multi-family homes appreciated in value faster than single-family homes did. If you can handle being a responsible landlord, purchasing such a unit and renting it out could yield greater returns than buying a beach house for summer vacations.