Should You Consider BP?

With shares of BP (NYSE:BP) trading around $51, is BP an OUTPERFORM, WAIT AND SEE or STAY AWAY? Let’s analyze the stock with the relevant sections of our CHEAT SHEET investing framework:

BP is an integrated oil and gas company. The firm provides its customers with fuel for transportation, energy for heat and light, lubricants, and the petrochemicals products used to make items like paints, clothes, and packaging. It operates in two business segments: exploration and production, and refining and marketing. BP provides energy products to consumers and companies worldwide. Without the oil and gas products provided, many consumers and businesses would not be able to operate on a daily basis.

According to BP, drivers whose vehicles rely on burning oil have a little more than a half-century to find alternate sources of energy. Or walk. BP’s annual report on proved global oil reserves says that as of the end of 2013, Earth has nearly 1.688 trillion barrels of crude, which will last 53.3 years at current rates of extraction. This figure is 1.1 percent higher than that of the previous year. In fact, during the past 10 years proven reserves have risen by 27 percent, or more than 350 billion barrels. The increased amount of oil in the report include 900 million barrels detected in Russia and 800 million barrels in Venezuela. OPEC nations continue to lead the world by having a large majority of the planet’s reserves, or 71.9 percent.

As for the United States, which lately has been ramping up oil extraction through horizontal drilling and hydraulic fracturing, or fracking, BP says its proven oil reserves are 44.2 billion barrels, 26 percent higher than in BP’s previous report. This is more than reported most recently by the U.S. Energy Information Administration, which had raised its own estimate by 15 percent to 33.4 billion barrels. That means shale-oil extraction enterprises in the United States have more to offer than many first believed. The sources include the Bakken formation spanning Canadian and U.S. territory in the West, the Eagle Ford formation in East Texas, and the super-rich Permian Basin in West Texas, which alone holds 75 billion barrels of recoverable fossil fuels.

Although Eagle Ford and Bakken seem to hold far less oil, EOG Resources, which has been working Eagle Ford, has increased its estimates of the site’s reserves. The Motley Fool reports that its latest estimate of recoverable fuel is 3.2 billion barrels, more than the nearly 1 billion barrels expected in 2010. Nevertheless, BP is cautious in defining oil reserves. At the top of an introductory web page on the subject, the company states baldly: “Nobody knows or can know how much oil exists under the earth’s surface or how much it will be possible to produce in the future.”

While the amount of proven oil reserves and its extraction are rising each year, so is concern about its recovery. Not only do new extraction methods use huge amounts of energy to get even more energy, particularly from shale, they also use chemicals and metals that many fear poison nearby soil and groundwater, and generate huge amounts of toxic wastewater.Such methods are helping the United States, for example, to achieve energy independence. But that won’t apply to China, a huge customer for fossil fuels. BP says Asia-Pacific oil reserves will last only 14 years at current rates. That means China will have to keep importing oil, putting further strain on global reserves. Originally written for OilPrice.com, a website that focuses on news and analysis on topics of alternative energy, geopolitics, and oil and gas. OilPrice.com is written for an educated audience that includes investors, fund managers, resource bankers, traders, and energy market professionals around the world.

BP stock has been surging higher over the past couple of quarters. However, the stock is currently trading sideways and may need time to stabilize before heading higher. Analyzing the price trend and its strength can be done using key simple moving averages. What are the key moving averages? The 50-day (pink), 100-day (blue), and 200-day (yellow) simple moving averages. As seen in the daily price chart below, BP is trading above its rising key averages which signal neutral to bullish price action in the near-term. 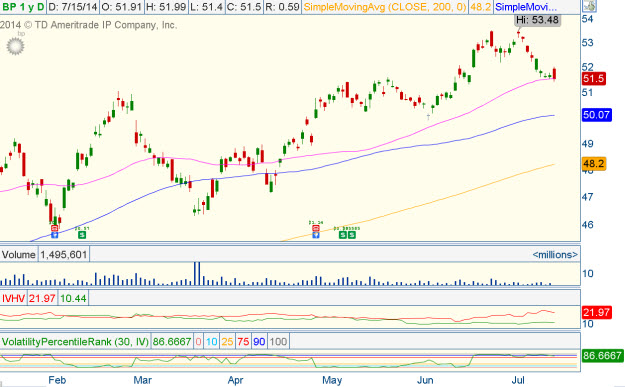 BP has seen decreasing earnings and revenue figures over the last four quarters. From these numbers, the markets have had mixed feelings about BP’s recent earnings announcements.

BP has been a relative performance leader, year-to-date.

BP is an oil and gas company that supplies energy products and services worldwide. The stock has been surging higher over the past couple of quarters, but is currently trading sideways. Over the last four quarters, earnings and revenues have been decreasing, which has produced mixed feelings among investors. Relative to its weak peers and sector, BP has been a year-to-date performance leader. Look for BP to OUTPERFORM.