Should You Invest in Yum! Brands? 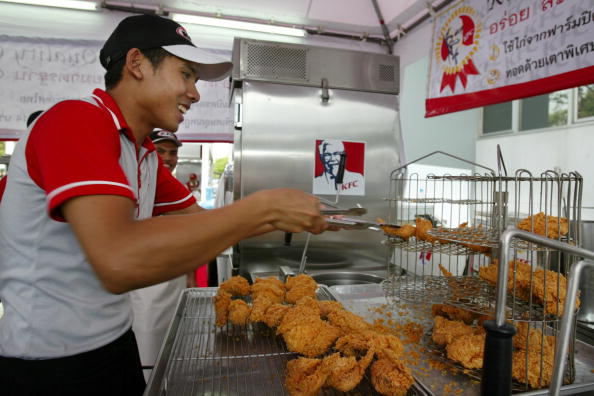 Since being spun off by PepsiCo (NYSE:PEP), Yum! Brands (NYSE:YUM) has been an incredible performer — up 900 percent in 15 years. But recently, the company has faced some challenges. While investors were used to seeing double digit earnings growth like clockwork, the company saw its earnings decline and its margins compress. This was largely the result of a public relations snafu in 2012 when Chinese consumers found out that Kentucky Fried Chicken was giving antibiotics to its chickens. Sales in the company’s fastest growing market suddenly turned negative, and this took its toll on the company’s sales, profits, and margins.

Nevertheless, the company plans to “makeover” its Kentucky Fried Chicken brand in China, according to Reuters, and it is confidently projecting 20 percent earnings per share growth despite last year’s setback.

As a result, investor confidence has returned. In fact, the analysts seem to be more confident than the company itself, which is unusual. With the company projecting at least 20 percent earnings per share growth, this brings its 2014 earnings to about $2.85/share. Analysts are projecting $3.63/share. This means that analysts see the stock trading at just 20.6 times 2014 earnings. This makes the stock inexpensive considering the explosive growth projections that we are seeing.

However, if the company’s low end projection is correct, then the shares trade at 26.5 times earnings. This is a major difference; if the company is growing 2014 earnings 20 percent, then 26.5 is not a very appealing multiple to pay for the company’s earnings, especially since it is unlikely that the company will be able to maintain such a robust level of growth. After all, the growth projections from 2014 versus 2013 are only so high because management and investors are expecting a recovery off of a low point. If we average out the growth over a few years, the company’s earnings per share growth is in the low double digits even if 2014 growth comes in at 25 percent. This is certainly impressive considering how cutthroat the restaurant industry is, and considering the economic landscape, but it is not worth 26-times earnings.

From what has been said, the company is actually somewhat attractive — it is at worst a little overvalued and at best undervalued. But we haven’t considered the possibility that the fallout from Yum! Brands’ Chinese snafu will be more permanent. As I just mentioned, the restaurant industry is incredibly competitive, and Chinese consumers who are concerned about the quality of their food may be reluctant to return to Kentucky Fried Chicken. Since Chinese growth has propelled the company’s overall growth a great deal, this scenario could be very devastating if it plays out. If, for instance, Yum! Brands were to see its earnings flatten out for a couple of years, there is no reason why the stock shouldn’t trade at 10-12 times earnings. Considering that the company now trades at 32 times trailing earnings, the downside potential could be tremendous — over 50 percent!

I think investors have to worry about other things as well when it comes to Yum! Brands. Most notably, we see the prices of agricultural commodities rising, and this means that the company’s costs will likely rise. One of the most essential ingredients that Yum! Brands uses — corn — has been especially strong. Corn prices are up 13 percent year-to-date already, and we have just learned that American farmers are going to be growing less corn than initially thought. This will put upward pressure on prices. Investors have to realize that corn is one of the staples of the food and restaurant industries. Yum! Brands will likely use corn to feed many of its animals. It is also used as a sweetener in the form of corn syrup in many of its restaurants, especially in the United States.

With that being the case, I think there is a good chance that Yum! Brands will see pressures on its margins due to rising input costs. If we couple this with the possibility that consumers continue to avoid Yum! Brands’ restaurants out of concern for their health, we suddenly have an investment that has a lot of downside potential. What happens, for instance, if year-over-year sales are relatively flat and higher input costs lead to margin compression? Investors might give the company a pass for a quarter or two, but eventually I think they will start bailing — and in a big way.

Therefore, I would avoid Yum! Brands for the time being. The company has a lot to prove before investors should be willing to pay more than 30 times earnings for its shares.