Should You Take a Chance With GlaxoSmithKline?

With shares of GlaxoSmithKline (NYSE:GSK) trading around $54, is GSK an OUTPERFORM, WAIT AND SEE, or STAY AWAY? Let’s analyze the stock with the relevant sections of our CHEAT SHEET investing framework:

Peter Humphrey had not expected to be caught in the glare of a television camera from China Central Television, the state broadcaster, when he was escorted last August into a small room in a Shanghai detention centre. Humphrey, a British private investigator hired by GlaxoSmithKline to investigate whether a former Chinese employee was waging a smear campaign against the company, was asked to read a confession into what he was told would be a small police interrogation camera, according to people familiar with his case. Police informed him that it would help his situation. A month earlier Humphrey and Yu Yingzeng, his American wife and business partner, had been arrested on charges of illegally purchasing private information and operating an illegal business. Handcuffed and wearing an orange prison vest, Humphrey instead found himself recording a confession that would later be broadcast across the country. “He had no choice but to say what he had been told to say in front of a big camera instead of a small one,” said one person familiar with the trap. “He was extremely upset about it afterwards and the British government complained.” Shanghai police declined to comment.

Almost a year to the day after they were first detained, Humphrey and Yu’s situation has not improved, although they now face only one charge of illegally obtaining private information. On Wednesday, Chinese authorities informed U.S. consular authorities that the couple would be tried next month in secret, in a hearing closed to their family members and foreign diplomats. The U.S. embassy in Beijing said on Friday it was “concerned” that the trial would be closed, adding that diplomatic access to such hearings is guaranteed under a Sino-US treaty. The U.K. government said it had sought to make sure “judicial process is followed in a fair way in line with international law.” Just days earlier, GSK confirmed for the first time that it asked Humphrey and Yu in April 2013 to establish who had planted a clandestine video camera in the bedroom of Mark Reilly, the U.K. pharmaceutical company’s former China head. Reilly faces possible prosecution in the country on corruption charges. GSK also wanted the couple to establish whether its former China government relations director had orchestrated an alleged email “smear campaign,” in which an anonymous whistleblower told regulators that fraudulent practices were rife at the company. 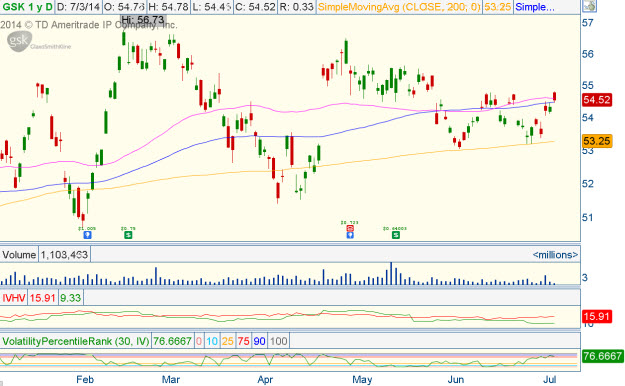 Rising stock prices are often strongly correlated with rising earnings and revenue growth rates. Also, the last four quarterly earnings announcement reactions help gauge investor sentiment on GlaxoSmithKline’s stock. What do the last four quarterly earnings and revenue growth (Y-O-Y) figures for GlaxoSmithKline look like and more importantly, how did the markets like these numbers?

GlaxoSmithKline has seen decreasing earnings and revenue figures over the last four quarters. From these numbers, the markets have had mixed feelings about GlaxoSmithKline’s recent earnings announcements.

GlaxoSmithKline has been an average performer, year-to-date.

GlaxoSmithKline is a healthcare group that engages in many aspects of the pharmaceutical business around the world. The stock has trended higher in recent years and looks set to continue. Over the past four quarters, earnings and revenue figures have been decreasing, which has produced mixed feelings among investors. Relative to its peers and sector, GlaxoSmithKline has been an average year-to-date performer. WAIT AND SEE what GlaxoSmithKline does next.