Should You Take a Chance With Lockheed Martin?

With shares of Lockheed Martin (NYSE:LMT) trading around $158, is LMT an OUTPERFORM, WAIT AND SEE, or STAY AWAY? Let’s analyze the stock with the relevant sections of our CHEAT SHEET investing framework:

Lockheed Martin is a global security and aerospace company principally engaged in the research, design, development, manufacture, integration, and sustainment of technology systems and products. The company also provides a range of management, engineering, technical, scientific, logistic, and information services. It serves both domestic and international customers with products and services that have defense, civil, and commercial applications with its principal customers being agencies of the U.S. government. It operates in five business segments: Aeronautics, Information Systems & Global Solutions, Missiles and Fire Control, Mission Systems and Training, and Space Systems.

Borne of the last downturn in U.S. military spending in the 1990s, Lockheed Martin’s F-35 Joint Strike Fighter was intended as a quick and affordable way for the United States and its allies to replace thousands of aging F-16s and other warplanes while avoiding the pitfalls of earlier programs. Nearly two decades and a $166 billion jump in projected costs later, the world’s largest arms program was poised for a high-profile international debut at two British air shows when the Pratt & Whitney engine on one of the jets broke apart and caught fire during a takeoff from a Florida air base. The incident has grounded the existing fleet of 97 F-35 jets and triggered a fresh wave of criticism about the costly new warplane, although U.S. and British officials are underscoring their continued commitment to the program, which now has a revised price tag of $398.6 billion.

The latest engine issue came weeks after an in-flight oil leak that sparked a brief grounding in June, but U.S. officials remain hopeful the jet will at least fly at the bigger of the two UK events – the Farnborough Airshow that starts on July 14. Lockheed‘s F-35 program manager Lorraine Martin told reporters that the planes would miss the first day of the Royal International Air Tattoo air show, but could still arrive in time to fly at the event, which continues through July 12. She said Lockheed had spare parts on hand at the air field in case they were needed. British Defense Secretary Philip Hammond on Wednesday said the F-35 may miss the Air Tattoo given the grounding order, but said he was optimistic that the plane would fly at Farnborough.

It would be a huge embarrassment if it misses that show too, and could undermine export interest in the jet just as several countries including Canada and Denmark, both of which helped fund development of the jet, are weighing F-35 orders. With three different models, supersonic speed and cutting-edge electronics, the F-35 was designed as a multi-service, multi-national program to lower development and production costs. Yet early technical challenges drove the cost of the program nearly 70 percent over initial estimates. Pentagon officials say the F-35 is finally making progress after several major restructuring and years of delays, but also say the jet still has 40 percent of developmental testing to go. The sheer complexity and scale of the program, which involves three U.S. military services and nine other countries that have placed firm orders, also mean that grounding and technical issues have a far wider impact than on a single-service weapon. Lockheed is developing and building three models of the F-35 for the U.S. Air Force, Navy and Marine Corps, and a growing number of countries.

Analysts say the latest technical issue underscores the danger of starting production of a new weapons system before all testing is finished, a practice known as “concurrency”. Frank Kendall, the Pentagon’s chief arms buyer, has called that approach “acquisition malpractice,” and is putting in place reforms to avoid similar problems on other weapons programs. The Pentagon recently lowered its estimate for the cost of concurrency – or retrofitting existing F-35 jets to correct design problems – but officials warn that new issues can always crop up, such as the June 23 incident in Florida. “Engineering discoveries are a normal part of this and every other aircraft development program. Some of them are relatively insignificant, and others more concerning, but with each test event and every training mission we are learning and constantly improving,” said U.S. Air Force Lieutenant General Christopher Bogdan, who runs the Pentagon’s F-35 Joint Program Office.

Lockheed Martin stock has been moving higher over the past couple of years. However, the stock has been trading sideways and may need time to consolidate. Analyzing the price trend and its strength can be done using key simple moving averages. What are the key moving averages? The 50-day (pink), 100-day (blue), and 200-day (yellow) simple moving averages. As seen in the daily price chart below, Lockheed Martin is trading between its rising key averages which signal neutral price action in the near-term. 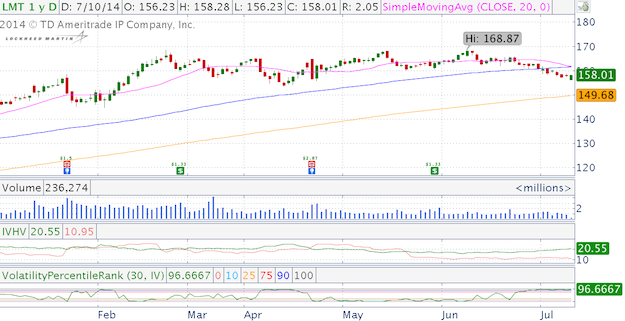 Lockheed Martin has seen increasing earnings and decreasing revenue figures over the last four quarters. From these numbers, the markets have been optimistic about Lockheed Martin’s recent earnings announcements.

Lockheed Martin has been a relative performance leader, year-to-date.

Lockheed Martin provides valuable and essential security and aerospace technology to several companies and the governments worldwide. The stock has been moving higher in recent years but is currently trading sideways. Over the last four quarters, earnings have been on the rise while revenues have been decreasing. However, investors have remained optimistic. Relative to its peers and sector, Lockheed Martin has been a year-to-date performance leader. WAIT AND SEE what Lockheed Martin does the rest of this quarter.