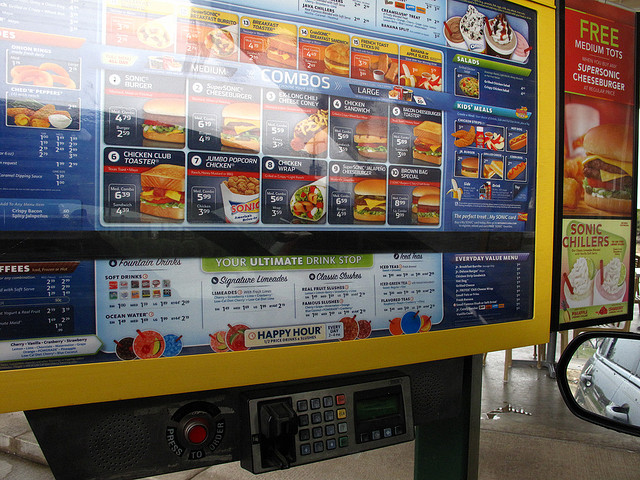 Sonic Corp. (NASDAQ:SONC) is a fairly well-known company. While it has yet to reach global representation, it is growing strongly in the United States. The company is the nation’s largest chain of drive-in restaurants. It operates about 3,500 drive-ins serving approximately 3 million customers every day. Sonic’s appeal to guests are its signature menu items, including hamburgers, hot dogs and its famous ‘more than 1 million drink combinations.’ Further, the company strives for friendly service by old fashioned carhops that roller skate out to patrons vehicles; or for those choosing to sit down, up to the restaurants’ tables where patrons are seated. The company is profitable, and those profits are growing. The stock itself has almost doubled off its 52 week low of $13.63, trading at $22.50, and I expect the stock to move much higher as it has just reported a strong quarter.

The company’s same-store sales really caught my eye. Sonic saw system-wide same-store sales increase 5.3 percent, which was comprised of a 5.3 percent same-store sales increase at franchise drive-ins and an increase of 5.2 percent at company drive-ins. This drove the company’s income substantially higher versus last year’s comparable quarter. Sonic’s net income increased to $16.8 million or $0.30 per diluted share, compared with net income of $14.8 million or $0.26 per diluted share in the same period in the prior year, resulting in earnings per share growth of 15 percent.

Now, for the first nine months of Sonic’s fiscal 2014, net income totaled $29.1 million or $0.51 per diluted share compared with net income of $24.5 million or $0.43 per diluted share last year. Driving some of the growth in the third-quarter was the company’s slow but steady expansion. I must say that Sonic’s growth plans are incredibly strong in my opinion and will serve the company well in the future, as this growth can be controlled.

The company continued to use its existing cash and free cash-flow to repurchase $11 million of stock in the quarter. For the fiscal year-to-date, Sonic has purchased $69.4 million at an average price of $19.32 per share representing more than 6 percent of its outstanding shares. Clifford Hudson, the Sonic Chief Executive Officer, stated:

Same-store sales for the quarter were especially strong, driven by our innovative product news, layered day-part promotional strategy, and increased media efficiency. The multiple initiatives we have in place to increase sales, profits and new drive-in development are working together nicely to optimize shareholder value. We have implemented our new point-of-sale system in all of our company drive-ins and expect to have the new digital point-of-purchase technology implemented in all of our company drive-ins by the end of summer. Our multi-year implementation of these systems in franchisee-owned drive-ins will begin this fall.

Going forward, these technology initiatives to improve operational efficiency and enhance customer engagement will be an important contributor to increased sales and profits for our entire system. We are confident our multi-layered growth strategy, which incorporates same-store sales growth, leverage from higher sales, deployment of free cash-flow, increasing royalty revenues and new drive-in development, will continue to result in double-digit earnings per share growth in the near and long term.

Sonic beat estimates on the top and bottom line, but the stock is a buy because of the company’s growth rates and conservative guidance. The company expects its initiatives to drive 14 percent to 15 percent earnings per share growth in fiscal 2014 as compared to the adjusted non-GAAP earnings per share for fiscal 2013. Sonic’s outlook for the fourth fiscal quarter of 2014 is strong. It sees positive same-store sales in the low single digit range for the system as well as 15 to 20 new drive-in openings and fewer drive-in closings than in fiscal 2013. It sees company drive-in margins improving by 75 to 125 basis points which is a huge plus. To fund operations it expects reasonable selling, general and administrative expense of $17.5 million to $18.5 million but a somewhat high income tax rate between 36.5 percent and 37.5 percent. The company will also have healthy capital expenditures of $75 million to $80 million for the fiscal year, which reflects implementation of a new point-of-sale system and digital point-of-purchase technology in company drive-ins.

Finally, by the end of the quarter, Sonic thinks it will have repurchased $80 million of stock across the fiscal year. With this approach and the company continuing to deliver, I think the stock is attractive here. While it is not a high flying stock or rapidly growing, it strikes me as a solid mid- to long-term buy. As such, I have a buy rating on the stock and assign a $27.75 price target.

Disclosure: Christopher F. Davis hold no position in Sonic Corp and has no plans to initiate a position in the next 72 hours. He has a buy rating on the stock and an $27.75 price target.