Steve Sarkisian Lawsuit: Did USC Fire Him Over His “Disability?” 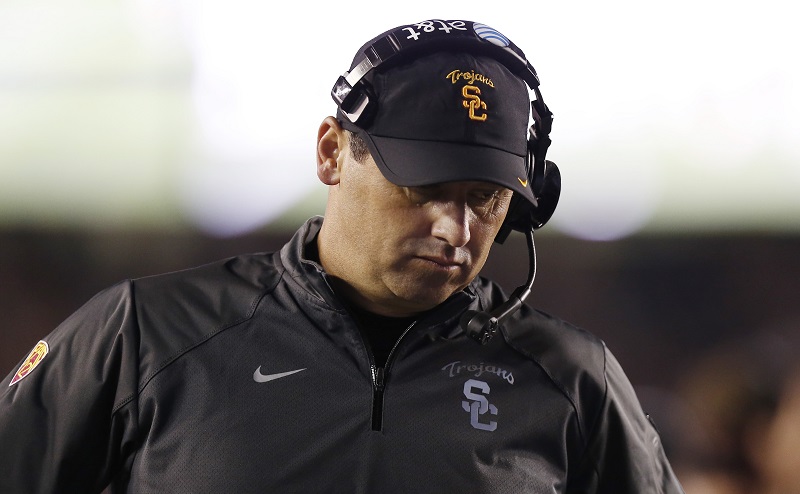 In mid-October, USC football coach Steve Sarkisian was relieved of his duties by the school’s athletic director, Pat Haden.

“After careful consideration of what is in the best interest of the university and our student-athletes, I have made the decision to terminate Steve Sarkisian, effective immediately,” Haden wrote at the time. “Through all of this we remain concerned for Steve and hope that it will give him the opportunity to focus on his personal well-being.”

This happened after Sarkisian’s Trojans – one of the most storied teams in college football history – sputtered during the first several weeks of the season. A season in which USC was expected to compete for a conference, and possibly a national title. What made the move incredibly surprising was that Sarkisian was fired less than two years after he was hired away from the University of Washington, prompting a return to Southern California where he previously coached under now Seattle Seahawks head man Pete Carroll.

This was basically Sarkisian’s dream gig – a top-five coaching job at the top of his profession (sans NFL jobs) – in one of the nation’s most fertile recruiting grounds, and biggest cities. Yet, he let it all slip away. So, what happened, exactly?

According to numerous reports, Sarkisian had been battling an alcohol abuse problem, which led to a few high profile incidents at alumni events, and even showing up to practices while under the influence. Former players from other schools even chimed in a bit, recounting their own experiences with an evidently drunk Sarkisian showing up to scheduled team events.

To cut to the chase, Sarkisian is an alcoholic. And that’s the primary factor that led to his firing. That’s no laughing matter, and alcoholism is an issue that millions of people struggle with on a daily basis. We just don’t often see things come crashing down on such a high-profile and public stage. In fact, there was a very similar case of a police officer in Spokane, Washington suing the city on what was essentially identical grounds.

Here’s where things get really interesting.

In response to his firing, Sarkisian filed a wrongful termination lawsuit against USC, seeking $30 million. At the crux of the suit is that Sarkisian is claiming USC fired him for being an alcoholic – a condition which is considered a disability under the Americans with Disabilities Act. Therefore, Sarkisian feels that his firing was against the law, as it was ultimately a form of discrimination.

This was spelled out rather plainly by Sarkisian’s lawyer, who told TMZ that “alcoholism is a recognized disability under California law. So firing somebody because of that disability is against the law.”

USC shot back, however, saying that Sarkisian’s accusations that he was “kicked to the curb” were not accurate.

“Much of what is stated in the lawsuit filed today by Steve Sarkisian is patently untrue.  While the university does not as a matter of practice comment on personnel matters or litigation, the record will show that Mr. Sarkisian repeatedly denied to university officials that he had a problem with alcohol, never asked for time off to get help, and resisted university efforts to provide him with help. The university made clear in writing that further incidents would result in termination, as it did,” Carol Mauch Amir, USC General Counsel, said in a statement.

It’s a tricky situation. When is an employer (USC, in this case) allowed to take a stand against an employee’s substance abuse issues? Particularly if it’s impacting their work performance, and tarnishing the employer’s name and reputation? This is what’s going to be fleshed out in the courts, although it’s not the first time similar things have headed before a judge.

Employers do have some leeway, though. Employers are expected to provide “reasonable accommodation” to alcoholics under the rules of the ACA. “The ADA does not require an employer,” the United States Commission on Civil Rights says, “to provide an alcohol rehabilitation program or to offer rehabilitation in lieu of disciplining an employee for alcohol-related misconduct or performance problems.”

Performance problems are what led to Sarkisian’s dismissal, but there’s also one important aspect of the law that relates to performance that Sarkisian’s legal team is highlighting. And that’s the fact that misconduct, generally, can’t be blamed on alcoholism. At least that’s how the courts view things, in many cases.

So, there’s not a clear line, really. That’s why judges get involved.

“Normally, you draw the line when the behavior results in performance problems or misconduct at the workplace,” Eric Welter, a Virginia-based employment attorney told Lawyers.com, in an article exploring the topic. “So if you’re out drinking late and you oversleep and show up to work late, the employer can discipline you for being late to work. But if you tell the employer that you are an alcoholic and you’d like to go to treatment so you don’t have the problem again, the employer can’t then discriminate against you because you’re an alcoholic.”

What does this mean for Sarkisian’s case? It’s hard to say. We’ll have to let the legal system work its magic.

But really makes this sequence of events noteworthy, and worth paying attention to (even for folks who aren’t interested in sports), is the simple fact that this goes beyond a team’s record. Instead it is a labor and workplace dispute, meaning it’s a much bigger deal than just a football coach looking for more money. This could have a big impact on how disabilities and substance abuse issues are handled by employers nationwide.

In all likelihood, he would’ve been fired immediately, and few people would’ve thought much of it.

This is a topic that’s starting to bubble up more and more lately, as marijuana – legal, medical, or illegal – enters mainstream culture. And when you dig into the details, it seems ridiculous that someone could be fired for using cannabis on the weekend (and go to work not under the influence) and be fired, while alcoholism is given at least some legal protections.

That’s a big court battle that has yet to come, but you can probably count on seeing it relatively soon.

You could debate whether or not alcoholism should be considered a disability in the first place, as many have and will continue to do into the future. Either way, there are some lessons to learn from Sarkisian’s case, and the legal ramifications – particularly in the workplace – could be big. Though there is a level of precedent regarding alcoholism and employment, the courts could always throw us a surprise ruling.

We’ll just have to see if Sarkisian actually has a solid case, or if his $30 million lawsuit is nothing more than a Hail Mary.