Living in Your Mom’s Basement? Don’t Worry, A Lot of Young People Are 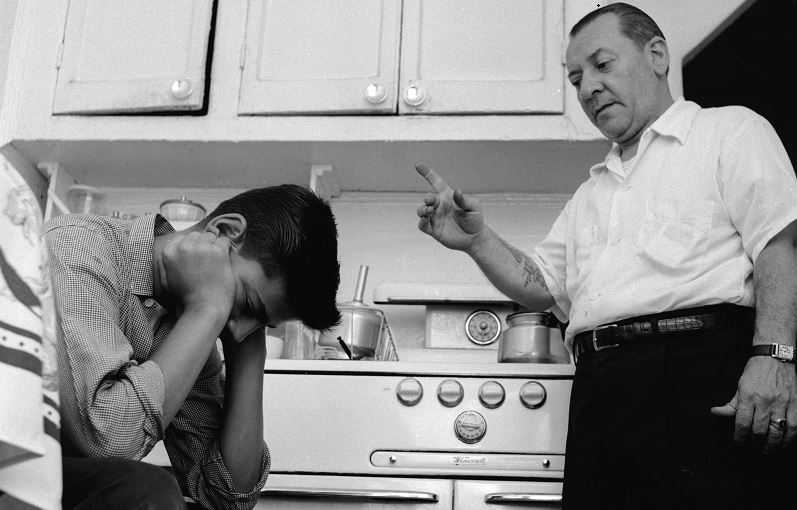 For a good number of millennials, adulthood has been stunted, and in undeniable fashion. There are a few possible explanations for that — the best and most obvious being the tumultuous and shape-shifting economy of the post 9/11 and post-recession world. That, along with some rather huge culture shifts over the past couple of decades, has more or less redefined what the average American home looks like.

And boy, the times are a changin’ — because according to a study released by the U.S. Census Bureau, you’re grandmother’s worst fears are slowly being cemented into reality.

The report details the transformation of the traditional American household from the late 1960s to the present day, and there are two big changes. First, the number of 25 to 34-year-olds living at home, or what comprises a core of the millennial demographic at this point in time, has shot way up over the past decade. Second, the number of people living with a spouse has dropped rather dramatically — and that has a lot to do with falling marriage rates.

To put things into perspective, during the late 1960s and early 1970s, roughly 70% of Americans over the age of 18 lived with their spouse. Now, 45  years later, that number has eroded all the way down to between 51-52%, meaning that a full one-fifth of American households have seen a rather dramatic change during that time. 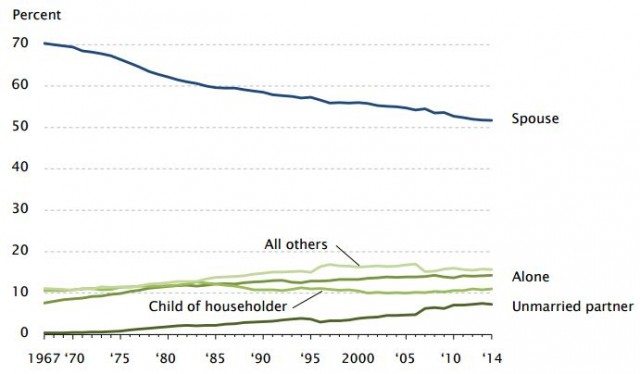 The chart above, from the Census Bureau’s report, really puts things into perspective. Also, we can see that those not living with their spouses are increasingly living with unmarried partners, or alone. Both households of that distinction have grown considerably over the past several decades, though the change in the slope hasn’t been nearly as pronounced as in the ‘living with spouse’ category. 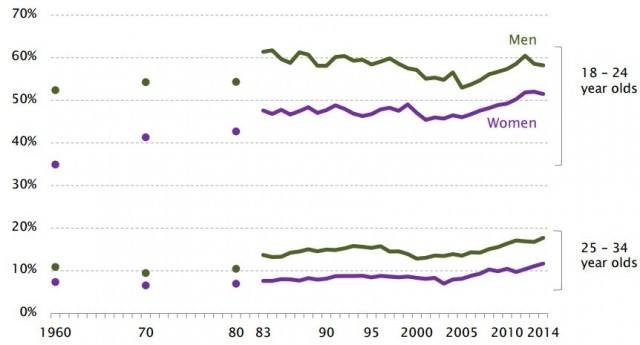 As for the other major change, the number of young adults living with their parents, there has been more than enough effort poured into figuring out why.

For millennials increasingly living at home, student debt is a common concern. By living with your folks for free or a discounted rate, it offers an opportunity to build up some padding in the bank, save for a house, or just simply time to find a stable job.

In the big picture, the two things both phenomena have in common is that they’re both products of the new economy — one that differs from that of yesteryear in a number of ways. Women now comprise a larger percentage of the workforce, for example, in addition to union membership being down, and globalization and technology making huge changes to where and how things are manufactured.

That means that segments of the population that would typically look for a spouse for economic reasons, and at a young age, are no longer doing so. More people are also able to support themselves, as we can see with the increasing number of people living alone. But we also can’t discount the fact that things are much more expensive than they previously were, and now require significant planning and saving. The average wedding, for example, costs more than $30,000 — an amount that a household could spend on a new car.

The average divorce? Between $15,000 and $30,000. And the younger you marry, the more likely you are to get divorced. With that in mind, it’s hard to blame young people for delaying the ceremony.

It may not mean much to today’s younger generations, who have grown accustomed to living with a significant other while unmarried.

What do these findings, and all of this data, mean for you? Well, if you were starting to wonder if you should ask your girlfriend to move in with you, it’s clear that it’s become much more widespread and socially acceptable than in generations past. While two unmarried partners cohabitating was often a very big hurdle for some people to get over — parents, typically — it’s obvious that attitudes are evolving.

Though the initial catalyst behind the changing living situations over the years may have been economic, the changes that have been realized are quite ubiquitous and more or less normal for most people. So, fellas, if you want her to move in, or if you’re ashamed about living in your folks’ basement, don’t worry — a lot of people are in the same boat.