The Dow Jones Industrial Average (NYSEARCA:DIA) gained 1.6 percent for the Holiday-shortened week after closing fractionally lower on a low volume Friday Session. The Nasdaq 100 (NYSEARCA:QQQ) lost 0.29 percent on Friday but the Nasdaq Composite was up 1.3 percent for the week. The SP500 (NYSEARCA:SPY) climbed 1.3 percent week over week. The Santa Rally appears to be well underway and the bulls are looking for more gains to close out the last two trading days of the year.

On a technical basis, the Dow is in a solid bull market but with several warning signals flashing. RSI, relative strength is over 70 which is considered in the overbought range and momentum is positive, however, the index is considerably overextended when compared to its 50- and 200-day moving averages. Also, adviser and retail investor sentiment are at extreme highs and margin debt is at record highs which are both contrarian bearish indications. Nevertheless, seasonality favors a continued extension of the current bull market at least into the early days of January as investors close out 2013 and look ahead to the New Year. 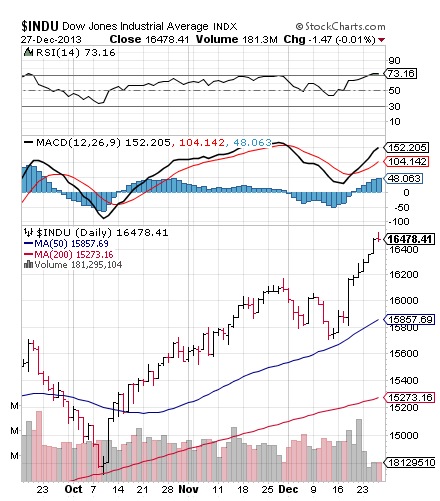 Last week’s economic news was positive with a sharp drop in unemployment claims and positive University of Michigan consumer sentiment reading. Durable goods orders were positive and new home sales supported the holiday mood. With just two trading days left in the year and a Holiday shortened week ahead, investors will be looking to close our their books and add “window dressing” to portfolios.

It will be a light week for economic reports with November Pending Home Sales on Monday, Case/Shiller Housing and PMI on Tuesday and a heavy set of reports on Thursday with weekly jobless claims, Markit PMI, construction spending and ISM on the schedule.

Bottom line: The Santa Rally is likely to continue. However, U.S. markets are very overextended, complacency is running high, and the major indexes are in bubble territory by many valuation methods. How, when or where this ends is unknown, but current conditions are similar to previous major market tops in 2000 and 2007.