The Dow Jones Industrial Average (NYSEARCA:DIA) gained 0.3 percent on Friday to set a new record and post a weekly advance of 3 percent. The S&P 500 (NYSEARCA:SPY) closed at a new high of 1818 for a gain of 2.4 percent on the week. The Nasdaq Composite (NYSEARCA:QQQ) set a comparable gain of 2.6 percent for the week. After spending two weeks worrying about the Federal Reserve and its tapering plans, markets shrugged off those concerns last week and seemingly began their traditional Christmas and early New Year rally.

In the chart of the Dow below, we can see how the index has broken all resistance as it pushed to new highs last week. Momentum and trend are both up, while relative strength nears overbought levels. The index tested and successfully held its 50-day moving average earlier in December and now the 50- and 200-day averages are both in up trends. 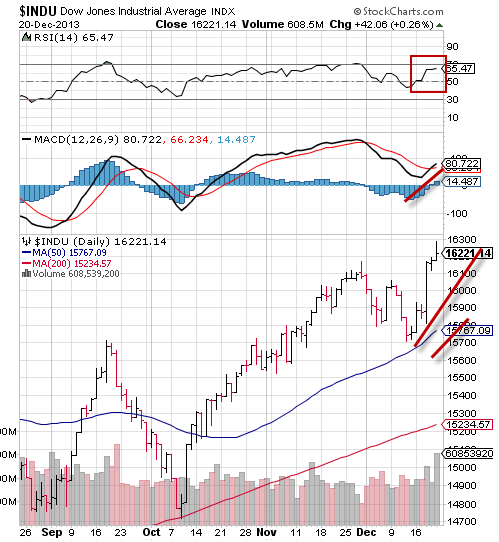 The Q3 GDP report came in much, much stronger than expected with a growth rate of 4.1 percent and this seemed to encourage investors that economic growth could finally become sustainable without major liquidity injections from the Federal Reserve.

Last week was also “quadruple witching,” the last day of the month for several options and futures contracts, which added to market volatility. More volatility can be expected in coming weeks as the market adjusts to life with reduced intervention by the Federal Reserve.

Next week will be light on economic reports with the Christmas Holiday and many traders head home for holiday vacations. Monday brings personal income and consumer spending for November, along with University of Michigan consumer sentiment. Tuesday sees November new home sales and durable goods orders while Thursday brings the usual weekly jobless claims report.

Bottom line: The Christmas rally will likely continue into the New Year, fueled by continuing Federal Reserve liquidity. However, many red lights flash warning signs ahead. Troubling elements include near record-margin debt, overly positive adviser, and retail investor sentiment, and overbought conditions that resemble other periods just prior to significant market tops. Ultra-high levels of fundamental and technical bullish sentiment prevail, and while no one has a crystal ball, it’s quite clear that a very significant market correction lies sometime ahead.

Don’t Miss: Obama: 2014 Will Be a ‘Breakthrough Year for America’