Remember Borders? What about Circuit City, Tower Records, or Musicland? Those stores were all big chains back in 1995, when Amazon debuted. But now they’re all gone, due in part to the online retailer upending the American retail landscape.

Jeff Bezos’ company has been blamed for killing off once-stalwart retail chains. To hear some tell it, the path to total Amazon domination is just beginning. One investment firm even has a “Death by Amazon” index to track the stock prices of 54 retail chains they believe are most threatened by the online retailer.

Of course, Amazon isn’t solely responsible for killing struggling stores. Bad leadership and strategic mistakes have crippled companies like Sears and JCPenney just as much, according to some. But when Amazon gets a category in its crosshairs, companies in the space need to brace for impact. If the following businesses can’t find a solution fast, they may be destroyed by Amazon. Many shoppers would miss one popular wholesale retailer (page 9).

Amazon may only control 1% of the grocery business in the U.S., but it’s poised to take a much bigger piece of the pie, threatening both small and large supermarket chains with its recent purchase of Whole Foods. That has traditional supermarkets very worried. Amazon is entering the highly competitive U.S. grocery market just as a war is heating up between stalwarts, such as Kroger and Safeway, and expanding chains, such as Aldi and Lidl.

Kroger’s stock took a big hit after Amazon announced it was buying Whole Foods, as did shares of Sprouts Farmers Market and Supervalu. The grocery battle could mean lower prices for U.S. consumers — at least in the near future — as well as a big shift in how we all shop for food, noted Quartz. Yet research suggests many people are resistant to the idea of shopping for groceries, especially perishables, online, so there might be hope for traditional supermarkets.

Next: This retailer has a bull’s-eye on it back.

Target’s stock price fell when Amazon acquired Whole Foods in 2017. The bull’s-eye branded store feels the pressure from both Amazon and Walmart, according to CNBC. Grocery is a big part of Target’s business, and Amazon’s push into food could hurt the chain.

To compete with Amazon, the Minneapolis-based retailer is rolling out a next-day delivery service for household products and some grocery items. It’s also adding more exclusive apparel and merchandise in hopes of luring people back into stores.

Next: Amazon wants to be in your kitchen.

The neighborhood supermarket isn’t the only food-related business Amazon has its eye on. It’s also moving into meal-kit delivery. The company recently registered a U.S. trademark for the phrase “We do the prep. You be the chef.” The Amazon Fresh kits are already available to some customers.

The revelation that Amazon is rolling out a product similar to Blue Apron hit the latter company hard, with shares sinking on the news. Similar companies, such as Hello Fresh, Plated, and Home Chef, could also be in trouble.

Next: The problem with Macy’s 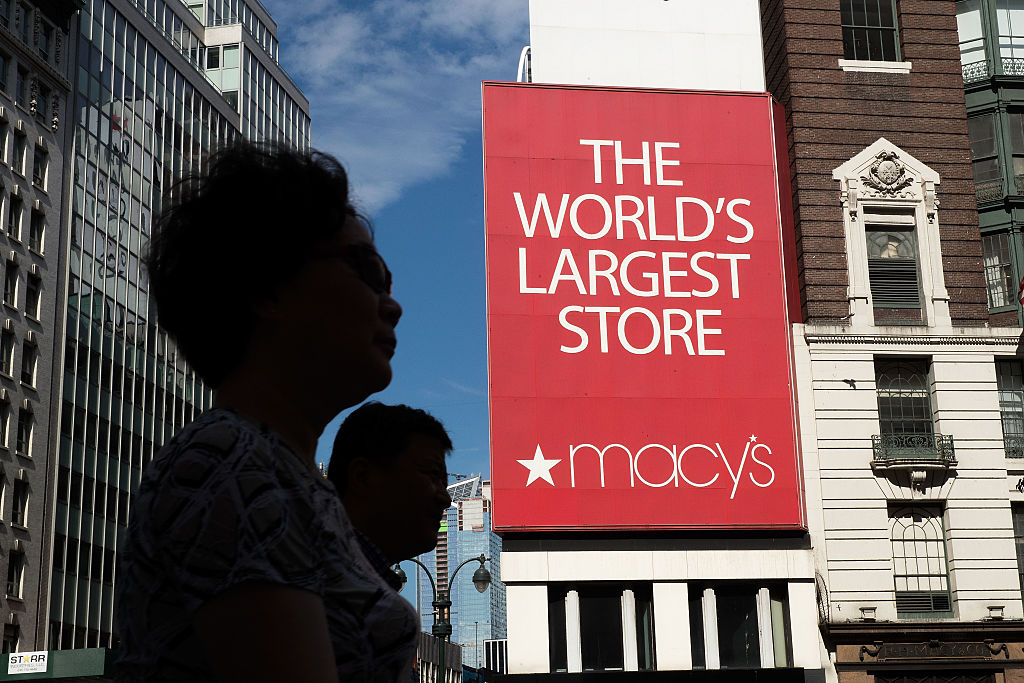 Sales are down at Macy’s as the retailer shutters stores and lays people off across the country. Amazon is overtaking the department store as the biggest online apparel retailer in the U.S. The behemoth is partly to blame for Macy’s struggles, according to analysts, though the chain created some of its own problems. Other department stores, such as Kohl’s and Nordstrom, aren’t faring well either.

“The most exposed to e-commerce are the department stores: They’re carrying the same merchandise, and the in-store experience isn’t spectacular. So they’re losing foot traffic, and they’re discounting heavily,” Bridget Weishaar, an analyst at Morningstar Investment Service, told Bloomberg.

Next: Are you ready to get office supplies from Amazon?

Staples has struggled ever since a merger with rival Office Depot was shot down due to antitrust concerns. The companies argued Amazon was enough of a rival in the office supplies space to justify the merger, but a judge disagreed.

Now, as predicted, Amazon is taking a bite out of Staples’ business. The online retailer is courting business-to-business customers, previously a sweet spot for Staples, Retail Dive explained. If Amazon can lure enough corporate customers away from Staples, it could spell big trouble for the chain.

Next: Even the biggest tech titans are struggling. 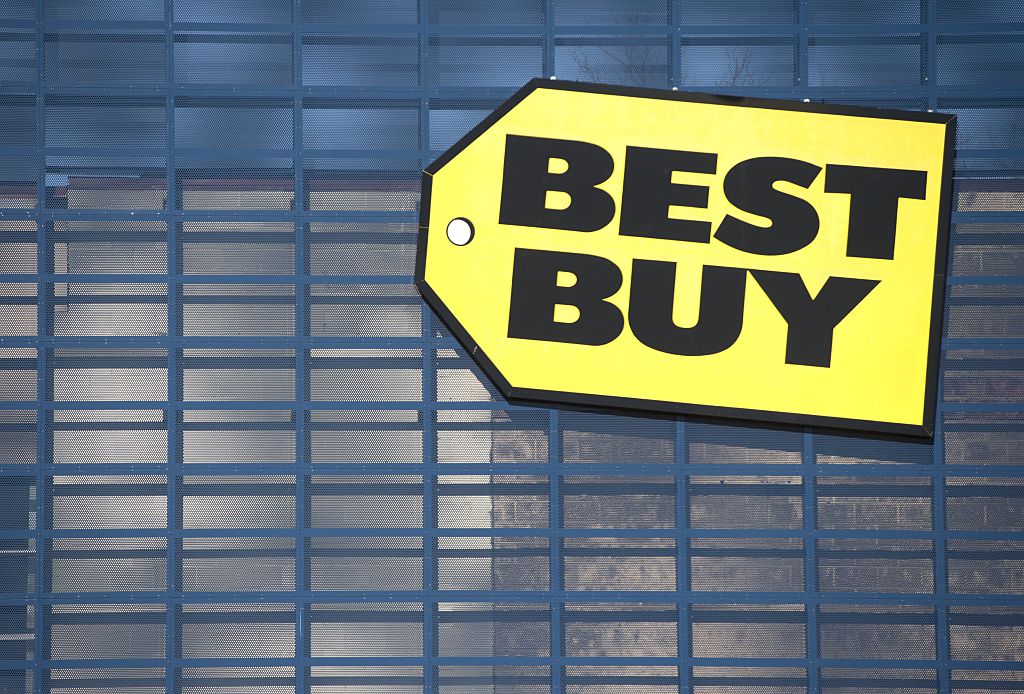 In June 2016, Amazon surpassed Walmart in electronics sales, putting it in second place behind Best Buy, according to Quartz. At the same time, Best Buy’s market share is shrinking. Sales of TVs, headphones, laptops, and other electronic gadgets at Amazon grew 28% in 2015, compared to single-digit growth at Apple and Best Buy.

But the brick-and-mortar electronics store is trying to fend off its biggest competitor by improving its e-commerce offerings. Best Buy seems to be having some success, so its fight with Amazon isn’t over yet.

Next: Will the last big bookstore chain survive the Amazon onslaught?

The bookstore industry felt the effects of the Amazon revolution first. Big chains like Borders fell once people realized they could buy the same titles online for less. Barnes & Noble was one of the few big national bookstore chains that hung on, but its days may be numbered.

Holiday sales have been disappointing, in part because the adult coloring book craze faded, but also due to ongoing pressure from Amazon. Things aren’t totally dire, however, because the chain has a decent amount of cash and little debt, as Barron’s reported. But with Amazon opening up physical bookstores around the country, the situation could sour quickly.

Next: A home furnishings retailer fights to survive.

Profits at Bed Bath & Beyond were down 30% in the first quarter of 2017, and some experts, like Mad Money’s Jim Cramer, are blaming Amazon for the slide. Online retail has been a challenge for the home furnishings chain, especially with Amazon offering free shipping to many shoppers. The chain hasn’t started shuttering its brick-and-mortar stores yet, but CEO Steven Temares said that might happen in the future, Fox Business reported.

Next: One of the most popular wholesale stores in America may lose out to Amazon.

Traditional supermarkets aren’t the only stores feeling the heat from the Whole Foods-Amazon deal. Costco stock prices dropped after the acquisition.

Investors are starting to fear that the company, which has a weak online presence, won’t be able to withstand the coming pressures, TheStreet reported. Some even suggested the membership-only club might need to merge with Walmart to survive.

Next: A sporting goods chain feels the Amazon pressure.

The retail playing field hasn’t been kind to sporting goods stores recently. Several chains have gone out of business entirely in the past few years, including Sports Authority and Sport Chalet. Dick’s Sporting Goods is the last remaining major national sporting goods retailer, and though it’s been working to capitalize on the demise of its rivals, the threat from Amazon is ever present.

Shares of the company’s stock fell in in June 2017 on the news that Nike planned to start selling its products directly on the site. The chain also recently launched a price-matching program to compete against Amazon and other retailers.

Next: Another shoe store prepares to do battle with Amazon.

Dick’s Sporting Goods isn’t the only chain sweating Amazon’s Nike deal. Foot Locker could end up sidelined as well. Nike products made up 68% of the chain’s sales in 2016, according to Barron’s. If Amazon starts peeling away customers, the shoe retailer could be in big trouble.

Next: A shoe retailer struggles to find its footing.

Discount shoe store Payless filed for bankruptcy in April 2017. Decreased foot traffic at America’s malls, caused in part by a growing preference for online shopping, is to blame, CNN Money reported. Approximately 400 U.S. stores are closing. Low prices aside, stores like Payless are losing business to online retailers offering a better array of products that don’t require an annoying trip to the mall.

“The model of online retailers is winning out. They are more competitive on pricing, they have better selection, and their convenience level is quite high,” Christian Magoon, CEO of Amplify ETFs, which has a fund tracking online-focused retailers, told CNN Money.

Next: Amazon gets crafty.

Need a quirky handmade item for your best friend’s birthday? One of the thousands of artisans selling on Etsy would be happy to supply it for you. The craft marketplace, which was founded in 2005, has managed to marry the convenience of online shopping with the desire to buy unique goods and support small businesses.

Naturally, Amazon decided to get in on the action. It launched Amazon Handmade in 2015, and though the selection isn’t nearly as broad as what you’ll find on Etsy, it can get items to shoppers faster, Fortune explained. But the creative types who sell on Etsy haven’t jumped ship to Amazon just yet, suggesting that Amazon is going to find it difficult to eclipse its rival.

Next: This electronics chain is a recent Amazon victim.

Best Buy may be able to fight off the Amazon assault, but other retailers haven’t been so lucky. Indianapolis-based HHGregg is the latest casualty. In early April 2017, the electronics and appliances chain announced it was shutting down completely after more than six decades in business. An unsuccessful attempt at a national expansion after the company went public in 2007 was a big reason for the HHGregg’s failure, but competition from Amazon was also a factor, the Indianapolis Business Journal reported.

“We didn’t adapt to that change fast enough,” CEO Bob Riesbeck told the publication earlier in 2017. “And now we are playing catch-up.” Apparently, the last-ditch attempts at a turnaround failed.

Next: It’s not all fun and games for the next struggling retailer on our list.

Department stores aren’t the only mall chains struggling with weak sales. GameStop is also having trouble getting buyers to visit its locations. The company plans to close roughly 150 stores because of a drop in global sales, which fell 13.6% from 2016 to 2017. Competition from Best Buy, Walmart, and — you guessed it — Amazon is to blame, according to USA Today. The fact that people are also buying fewer physical games doesn’t help either.

“Not only are they getting hammered by the online retailers and big box that have an inherent cost advantage through no retail real estate footprint or a much larger footprint that they can leverage with other products, but the movement to mobile-based games is creeping up mightily,” Larry Perkins, CEO and founder of SierraConstellation Partners, told USA Today.

Next: It’s not all fun and games for this toy store.

A shopper at a Toys R Us store | Paul J. Richards/AFP/Getty Images

Amazon makes it easy to buy all the hottest toys at the click of a button, which is putting brick-and-mortar retailer Toys R Us in a tight spot, according to Investopedia. Sales have been declining at the chain for years, and it has $5 billion in debt. The store has promised to improve its online presence and offered generous discounts on 2017’s Prime Day to woo customers away from Amazon, but it might be too little, too late.

Next: Could Amazon destroy this angelic chain?

Unflattering fitting room lights, awkward interactions with saleswomen, and high prices make bra shopping an unpleasant experience for many women. Amazon believes it can lure women away from stores like VS with $10 bras. According to Marketwatch, the internet retailer is likely sacrificing profit in an effort to persuade women to shop online. The online retailer may be trying to cut in on Target and Walmart, which also offer low-priced lingerie.

Selling intimate apparel online is a challenge because it’s hard to find the correct fit. But the time may be right for Amazon to take on Victoria’s Secret, which is responsible for two-thirds of all lingerie sold in the U.S. Sales are down, and a trend toward a more natural look means fewer women aspire to look like the chain’s famous Angels. Plus, refusing to sell larger-size bras means many women can’t shop at VS; they are already turning to Amazon to find the garments they need.