Stuck in your Annuity?

Here is some free financial advice that is extremely valuable: If the investment you’re looking to buy carries a stiff penalty to sell, avoid it. Variable annuities, for example—it’s one of many reasons they are poor investment options for the vast majority of investors.

In variable annuities, this exit penalty—the price of financial freedom, if you will—has a name: the surrender charge. Surrender charges are high fees assessed for leaving the contract soon after you buy it. “Soon” to an insurer typically means about seven years, with the fees starting out highest in year one and falling slowly through year seven. Exhibit 1 illustrates a common surrender schedule. 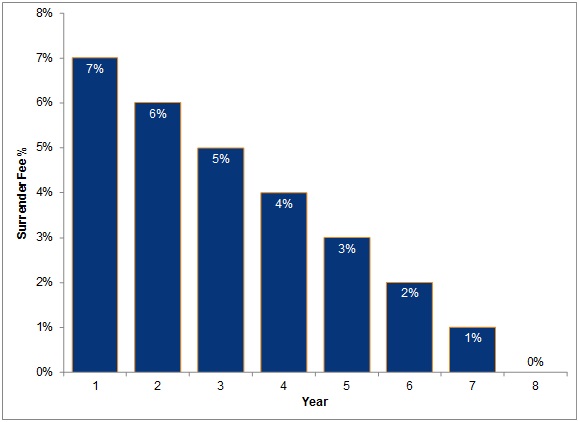 Source: Securities and Exchange Commission, http://www.sec.gov/investor/pubs/varannty.htm. This example is meant to illustrate a point and any resemblance to an actual contract is coincidental. Actual variable annuity surrender schedules may be shorter or longer, and fee rates vary. Be sure to educate yourself about the specific surrender schedule embedded in your annuity contract.

In dollar terms, exiting a $500,000 annuity would cost you $35,000 in year one. And this is not a high-end, cherry-picked number. Our firm, Fisher Investments, has analyzed thousands of annuities over time, and we’ve seen initial year surrender charges as high as 20%. But you shouldn’t just take our word for it. CNN cites the same 20%. According to the Texas Department of Insurance (the state’s insurance regulator), surrender charges “commonly range from 5 to 25 percent of the amount withdrawn.” We could keep going.

Perhaps that strikes you as no big deal, considering it applies only if you cash in the contract during this period. But the issue is actually much more fundamental than that when you consider the range of reasons this fee might apply.

One reason why variable annuities might carry such high exit charges? Insurers know many people will want to exit. The designed end to a variable annuity is annuitization—turning the contract’s accumulated value into a stream of payments the owner can’t outlive. Yet studies have shown around 95% of variable annuity owners never do this. Why? They cash out earlier.

So the high charge is there to discourage you from leaving. After all, if the annuity’s new car smell quickly fades and you realize you bought a lemon, are you really willing to part with a significant slice of your savings? Consider our example again: For a $500,000 portfolio, this realization carries a $35,000 sticker price, or roughly equivalent to a 2014 Audi A4 or an Acura TSX—costs we’re sure you’d enjoy more than paying a fee to an annuity company.

Another motivation for these high exit penalties is the insurer has costs to recoup, a major one being the compensation paid to the agent or broker who sold you the annuity. Typically, these commissions are far higher than equity or mutual fund commissions. ABC News cites a common range of 5%-8%, not dissimilar from typical surrender penalties in the first few years. Over time, the fees embedded in the annuity are designed to recoup these costs plus some—after all, annuity firms generally aren’t not-for-profits. The surrender is more or less structured to give you incentive to either own the contract long enough for the insurer to recoup their costs—or make you outright pay up if you don’t.

In our view, all this should raise two fundamental questions in any current or potential annuity owner’s mind:

These fees attempt to restrict your financial freedom, and they are only one of many problems with annuities overall. We consider it part of our mission to help investors better understand these complicated products and why they often work against investors.

If you have a $500,000 portfolio and own an annuity, you have a lot at stake. Make sure you understand the details by downloading Annuity Insights: Nine Questions Every Annuity Investor Should Ask by Forbes columnist Ken Fisher’s firm. This guide is designed to help you better understand these investments. Act now! Click here to download.