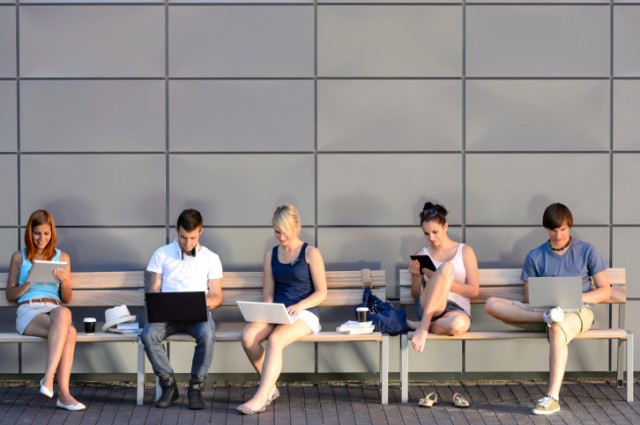 For most of modern history, people haven’t been able to get money off of their minds. It’s no different for the millennials, but there are some extra complications that this generation is dealing with that are making today’s young adults experience further issues.

Millennials are mainly stressed about student debt, in addition to the traditional worries like home ownership and retirement. And those things have all warped how today’s young adults feel about entering new phases in life.

According to a recently released Allstate/National Journal Heartland Monitor poll, a healthy portion of millennials view the paying-off of their student debt as the true mark of ‘moving on’, whereas traditionally just the act of graduating from college or high school signaled the crossing of a threshold.

“More young people picked paying off student loans than completing high school or even college as the sign of advancing to the next stage of life; for older respondents, paying off loans tied with graduating from college,” a press release reads.

Most people said that ‘adulthood’ actually began when they got “a job that is part of a long-term career.”

As for financial independence, the majority of respondents (which included a group of older and younger adults) agreed that individuals were moving out of the “starting out” phase of their lives once they “have disposable income and a long-term savings plan.” With that in mind, and considering the fury with which the past recession and sluggish economic recovery have wrought on a new generation of young adults, it may be some time before a good portion of millennials can safely say they are ‘on their own.’

But again, the biggest disparity in financial concerns expressed by both the younger and older poll respondents had to do with college costs. Today’s young adults are saddled with considerably more student debt than Generation X or the Baby Boomers, which allowed those generations the ability to pursue further education, or start a family earlier. We’ve seen tremendous drops in birth rates among millennials, indicating that the economic situation has impacted family planning for a lot of people, and it seems evident that millennials are more keen on trying to get a grasp on their careers and earnings than moving on to family life.

“Among young people, family (getting married or having children) or educational achievements (graduating from high school or college) trailed well behind all of these economic achievements as signs of advancing past the initial stage of life,” the poll said.

This brings us back to student debt, and the concern surrounding that additional debt load has on those eager to move on to the next stage of adulthood. It’s hard to argue that the recession and skyrocketing college costs have stunted traditional adulthood patterns for many millennials, and the current average student debt load for the class of 2015 is being pegged at right around $35,000.

This is the result of college costs having exploded over the past few decades. It’s hard to think where previous generations would be if they had started out $35,000 in the hole on average — with a healthy portion in much, much more debt. But the millennials are evidently aware of the effect that debt is taking on their lives, and are seriously concerned about it, at least according to this most recent poll.

While it’s too little, too late for millennials now, the real issue at hand is figuring out how to make sure following generations don’t find themselves in similar ruts to start out their adult lives. According to the poll, both older and younger respondents feel that education is the key in this respect, and that personal finance and an understanding of debt and banking should become a permanent fixture in most high school curricula. To drive home the need, some studies have found that nearly half of Americans don’t fully understand how their credit cards work.

There has been a big push for more (and better) personal finance classes, and some schools and school districts have incorporated them. While results have been mixed, it’s clear that education in other subjects, including mathematics, can help kids blossom into financially literate adults.

“Many young people have low levels of financial literacy,” says a Harvard Business School study, looking into the effect of finance classes on high schoolers. “Our findings suggest that increasing math requirements would be a more effective way to improve financial outcomes. Increased high school math instruction has a small, but meaningful, effect on financial outcomes, even on individuals as young as 24 to 36.”

Education, at a younger age, may be the key to keeper future generations out of millennial-level student debt, but getting the pieces and policies into place is a different story entirely.